Should the defending have been better? Perhaps. Certainly goalkeeper Timo Hildebrand could’ve done more. But take nothing away from the finish. It was a goal borne out of confidence; Rubén de la Red belonged at Real Madrid and he knew it.

That goal against Valencia, a 30-yard strike curled delightfully into the top corner, turned out to be the winner. It secured Los Blancos the 2008 Super Cup and should’ve just been one of many trophies de la Red won at the Santiago Bernabeu.

But de la Red was the only box-to-box midfielder at Bernd Schuster’s disposal. A powerful runner, yes, but also a cultured player who could create for his more illustrious team-mates.

He was also, perhaps more importantly to those in the stands, a staunch Madridista. To supporters he was just one of them. It’s why Los Blancos fans will always wonder what might have been.

De la Red was born in Móstoles, a municipality just 18 kilometres from central Madrid. He grew up supporting the club and achieved the dream of many a young fan when he was signed by the now-12-time European champions at the age of 14.

His ascent wasn’t straightforward, however. At one point Madrid transferred the youngster to CD Móstoles before signing him back soon after. While his youth coach Quique Sánchez Flores, who was joining Getafe, attempted to take the young midfielder with him in the summer of 2004.

Madrid blocked a potential switch and de la Red made his debut in November 2004 against Tenerife in the Copa del Rey. Fifteen further appearances would come sporadically over the next two seasons as de la Red struggled to hold down a first-team spot. Given he was up against Zinédine Zidane and David Beckham, that wasn’t entirely surprising.

But having represented Spain’s under-19s – with whom he won the European Championship in 2004 – and the under-21s, his quality couldn’t be denied. 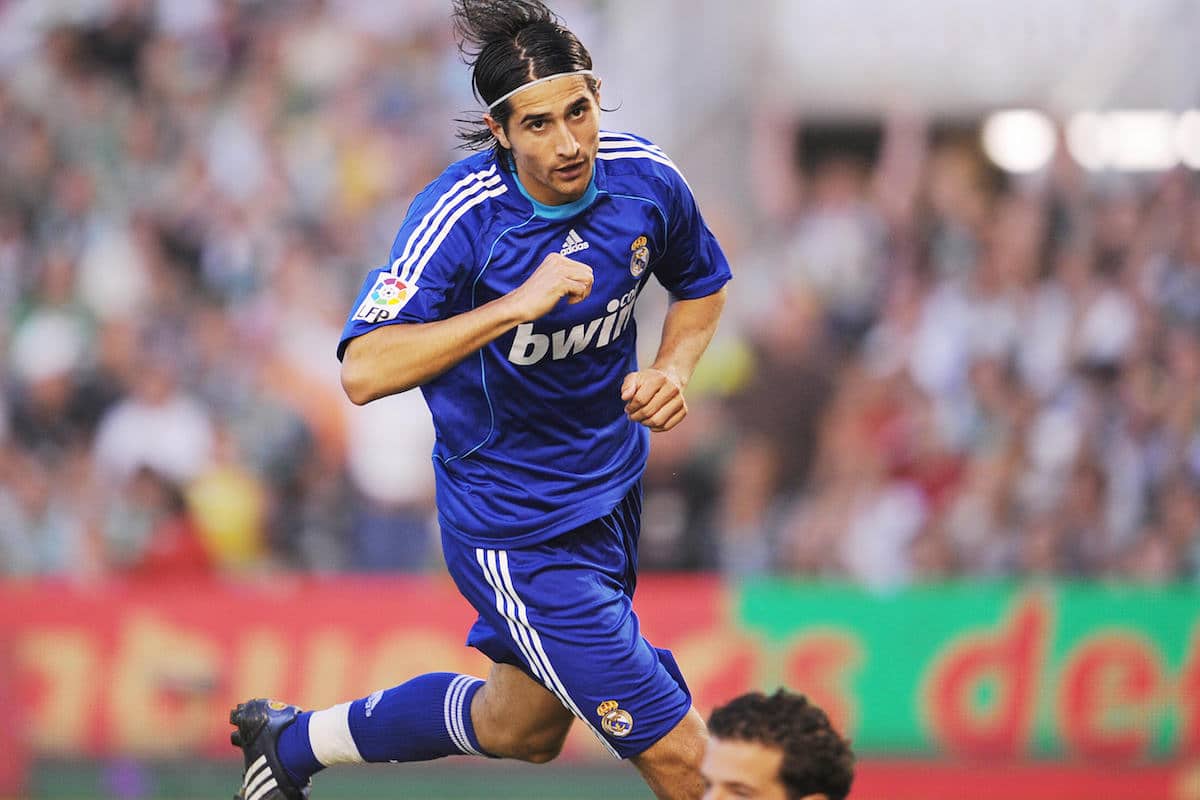 Real Zaragoza attempted to sign him in January 2007 only for Madrid to turn down their advances. Six months later, however, he was sold to Getafe for a meagre £2.4million.

It appeared a strange move based on that headline, but Madrid knew what they were doing. They retained the option to re-sign de la Red for two years for £3.6million. He just had to prove himself.

And so he did. Charged with being Getafe’s playmaker by then coach Michael Laudrup, de la Red thrived. He was a shining light in the side, scoring nine goals in all competitions and creating a further ten for his team-mates.

His excellent form played a big part in the Azulones reaching the UEFA Cup quarter finals, where they were knocked out by Bayern Munich, and the Copa del Rey final, where they were beaten by Valencia.

De la Red had made several people sit up and take notice. including Real Madrid and, arguably more importantly, national team manager Luis Aragonés, who named the midfielder in his squad for Euro 2008.

That Spain squad was one packed with midfield excellence. Xavi. Andrés Iniesta. Xabi Alonso. Marcos Senna. David Silva. Cesc Fabregas. And de la Red, who completed a move back to Madrid before the tournament began.

He would only play 90 minutes at Euro 2008, one of his three appearances for Spain's national side. But he made it count. In the final of La Roja's group games, against Greece, Aragonés rotated his side and de la Red started.

Spain were far from their fluid best and trailed to a first-half goal from Angelos Charisteas. It was da led Red who got them level.

A clipped ball forward was knocked down by Dani Güiza to the edge of the area, and there was de la Red, who unleashed a drive which went through Antonios Nikopolidis. It wasn't so much a goalkeeping error, more that the power on the shot meant the Greek stopper couldn't react quickly enough.

Spain would go on to win the tournament, beginning their four-year reign at the top of international football.

For de la Red it had been a dream summer, one in which he'd re-signed for his boyhood club, helped Spain to their first international trophy in 54 years and had his first child, a son.

He was ready to make his mark at Madrid and scoring that sumptuous goal in the Supercopa victory over Valencia was an ideal start.

After making his early-season appearances from the bench, soon he was in the starting XI. De la Red had scored twice and assisted a further two goals in ten appearances at the start of the 2008/09 campaign.

His eleventh outing, however, would be life changing.

There is nothing particularly special about Real Unión, a club who claimed four Copa del Rey titles in the early part of the 20th century but one that has spent the majority of their existence in the lower echelons of Spanish football.

But it was at their 5,000-seater home, the Stadium Gal, in 2008 that de la Red's career came to a shocking halt. Thirteen minutes into a Copa del Rey clash the midfielder fainted on the edge of the Unión penalty area.

The scene of players and medical staff surrounding the prone Madrid star was extremely distressing for those in attendance and those watching on TV. Spanish football fans had seen something similar a little more than a year earlier, when Sevilla full-back Antonio Puerta tragically died after suffering a cardiac arrest on the field.

De la Red was fortunate. He regained consciousness in the dressing room before being taken to hospital. He was released the following day.

“It appears that he fainted due to the physical effort he was putting in,” Madrid’s head of medical services Carlos Diez told reporters. “All tests at present are normal and he is without any problems.”

Further tests were carried out but with little success. Doctors couldn't work out why he had fainted. On December 12, 2008, Madrid confirmed de la Red wouldn't play again that season as a precaution. 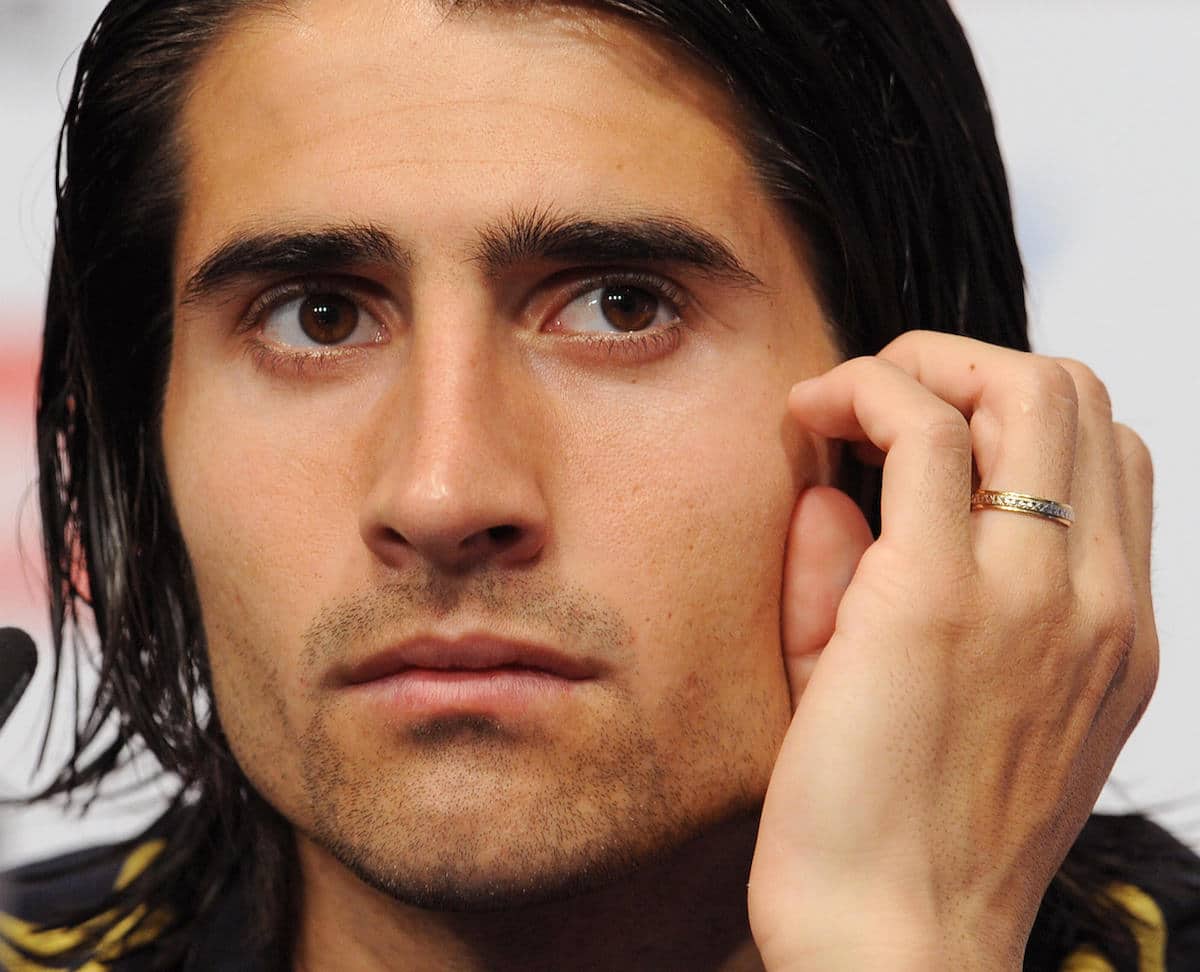 Over the next six months more tests were carried out with little success. In June 2009 it was announced the talented midfielder would also miss the 2009/10 season.

A year on from that night at Unión, de la Red spoke to Marca. There was no talk of a return.

“The only thing planned at the moment is to find more information about new check-ups that might help to find a solution.”

He admitted to feeling frustrated, who could blame him? But the deaths of  Puerta and Dani Jarque, who sadly died in August 2009, gave him perspective.

“I consider myself fortunate, because it could have been worse,” he accepted. “People give me encouragement and hope that I return as quickly as possible.

“I know that the people mean well. If I was in their situation, I would do the same thing. But at times it gives you the sensation that you are a poor little thing, and I am not at all. I hate seeing myself like that.”

Days and months ticked by. Players came and went, as did managers. De la Red could only watch on from the sidelines.

It was becoming clearer that there would be no happy ending for the player. In April 2010, he underwent a small procedure which saw a mini-Holster heart monitor implanted. Months later and there were still no clear answers. Doctors concluded he had a heart defect but were unable to diagnose it.

And so, in November 2010, over two years since he fell hard onto the Stadium Gal pitch, de la Red announced his retirement. Still there was no conclusive answers as to why he had fainted.

“I want to start by giving my support to all those athletes who have suffered like me, who have had their dreams cut short sooner than expected,” he said.

“From that day [against Unión] until now, I have struggled to return to wear the shirt of Real Madrid. Doctors have recommended me not to. Madrid is the team that has seen me grow but today I am announcing my retirement from playing.”

And that was it. A promising career ended at 25 years old. De la Red remained at Madrid, however, joining their academy coaching staff. He would also be part of José Mourinho's “lab”, which helped prepare the Los Blancos players for matches.

He spent five years working with sides including the Cadete B, Cadete A and Juvenil B with relative success. He left in 2015 to take charge of Getafe B, but left after one season which ended in relegation.

But de la Red remains determined on becoming a top level manager – which is hardly surprisingly given the way his playing career ended.

“I want to be training the elite,” he said in an interview with El Pais last year. “That is my dream. I'm young but the road ahead is going to mark my ability.

“A coach does not stop thinking about their team. It consumes you. You have no life; well, you have it, but it's filled with many hours when your head thinks about how to improve or how to keep playing well. Your head is always spinning.”

But should he fail in his ambition to work among European football's elite he won't be crushed. Life has taught the now 32-year-old that not everything works out as you expected. You need to roll with the punches and not take for granted the important things in your life.

“I am more sensitive now, my perception of life has changed. I value things more – especially my family and my children. Everything that has to do with my children excites me.”

But his first love remains as strong as ever. As he said when announcing his retirement: “I had to retire because of a problem with my heart, but my heart always beats for Real Madrid.”