Mateo Kovačić is a gifted footballer. He can skip beyond opposition midfielders with ease, he can protect the ball effectively and he can press efficiently. What he can't do – or at least hasn't done while at Chelsea – is affect games. It is a problem.

This season was supposed to be an important one for the Croatian. He had finally escaped the Real Madrid substitutes' bench with his loan move to Stamford Bridge. Out of the shadows of Luka Modrić and Toni Kroos, Kovačić was expected to blossom into the midfielder he appeared to be during his time at Internazionale.

But his 38 appearances for the Blues have raised more questions than answers. What is his best position, is the Croatian a six or an eight? What does he offer the side that Ruben Loftus-Cheek doesn't? And should Chelsea attempt to make his loan stay permanent in the summer?

That latter question is perhaps tied into the two that precede it. Kovačić has filled every midfield position in Maurizio Sarri's 4-3-3 but hasn't stood out in any of them.

When on the left his role is to create; to be the advanced playmaker who unlocks a tight defence, who finds Eden Hazard and Chelsea's other attackers in dangerous positions.

In the Premier League, though, the 24-year-old has created just one ‘big chance' all season and, perhaps most damningly, plays more backward passes per 90 (16.87) than any midfielder in the division. 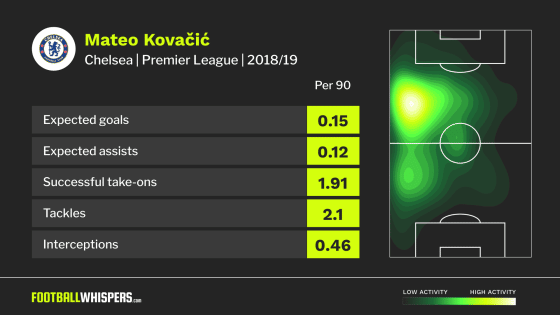 When deployed on the right, Kovačić has filled in for N'Golo Kanté. It's the box-to-box role within Sarri's system; the task is to start attacks, maintain possession and quash counters.

Let's first focus on the defensive aspect of the role. When it comes to interceptions per 90, Kovačić's 0.46 is bettered by more than one hundred Premier League midfielders. He also just scraps into the top 50 for tackles per 90 (2.10).

He is more effective with the ball – his 1.91 successful take-ons per 90 bettered by only 12 of his midfield peers – but, as touched upon above, isn't decisive.

Finally, let's move on to Kovačić as the No.6, the midfield pivot. It's a role he's been asked to play, in order to give Jorginho a break, more frequently since January following Cesc Fàbregas' departure to Monaco.

He skill set makes him well suited to the position; quick feet, ball protection, and neat passing are vital in helping Chelsea progress up the pitch. But often he is ponderous in possession, slow to make a decision, and that allows opponents to win back the ball in the Blues' final third.

Take the final 30 minutes of the Blues' 3-0 Europa League victory over Dynamo Kyiv. Jorginho was brought off after 62 minutes and Kovačić moved into the Regista role.

Given the quality of opposition and the scoreline, the Croatia international should've breezed through the final half hour. Instead, he struggled. He was dispossessed on three occasions which invited pressure. Kyiv had their best spell of the contest with Kovačić at the base of the Blues' midfield.

So let's return to our three questions. What is his best position, is the Croatian a six or an eight? The answer is probably the latter but he hasn't starred in the role.

What does he offer the side that Loftus-Cheek doesn't? To be blunt, not too much. Tactical discipline, perhaps. A little more defensive nous. And a better record with injuries are probably it.

And, finally, should Chelsea attempt to make his loan stay permanent in the summer? This might be a moot point given the Blues are currently fighting against a transfer ban but, if that is lifted or put on hold, the club would be wise to look elsewhere given Real Madrid are set to demand at least £30million.

Kovačić is a gifted player but one with an identity crisis. Until that is solved he is unlikely to ever become more than a rotation option at the biggest clubs in Europe.