Liverpool, Chelsea, Watford. After four games of the Premier League season, these were the only teams with a 100 per cent records. The odds of that might not have been a Leicester-esque 5000/1, but you imagine they must have been pretty high.

However, since their impressive comeback win against Tottenham Hotspur to round off those four victories from four games, Javi Gracia's side have only won two of their last eleven matches in the top flight.

In the process, they’ve slipped from the Champions League spots to the bottom half. So what has gone wrong for the Hornets?

Gracia still has faith in his players – in truth, he is unlikely to say anything else publicly. But he doesn't appear to quite know what Watford should be aiming for this term.

“I think in this moment, this team is doing a lot of things well, but they know that being demanding, we can improve and compete better day-by-day,” he said recently.

“That's our target, to be demanding and to be ambitious. We don't know what target we can achieve, but I believe in this group of players and I think we will be able to give our supporters something to enjoy with our play and our results as well.”

There are several reasons as to why the Spanish coach is not sure where Watford will finish come May. Midtable in the Premier League is, as it has been for the past few years, extraordinarily tight.

Just five points separate sixth to 13th, with sixth, seventh, and eighth all on 23 points.

With such a close pack, hot and cold streaks can make a lot of difference, and Watford can’t rely on their underlying numbers to propel them up the table.

The Hornets started the campaign hot but, with the benefit of hindsight, their start — Brighton and Hove Albion, Burnley, and Crystal Palace — was particularly easy.

The 2-1 home win over Spurs was impressive, but Watford’s expected goal (xG) numbers haven’t moved upwards much since. 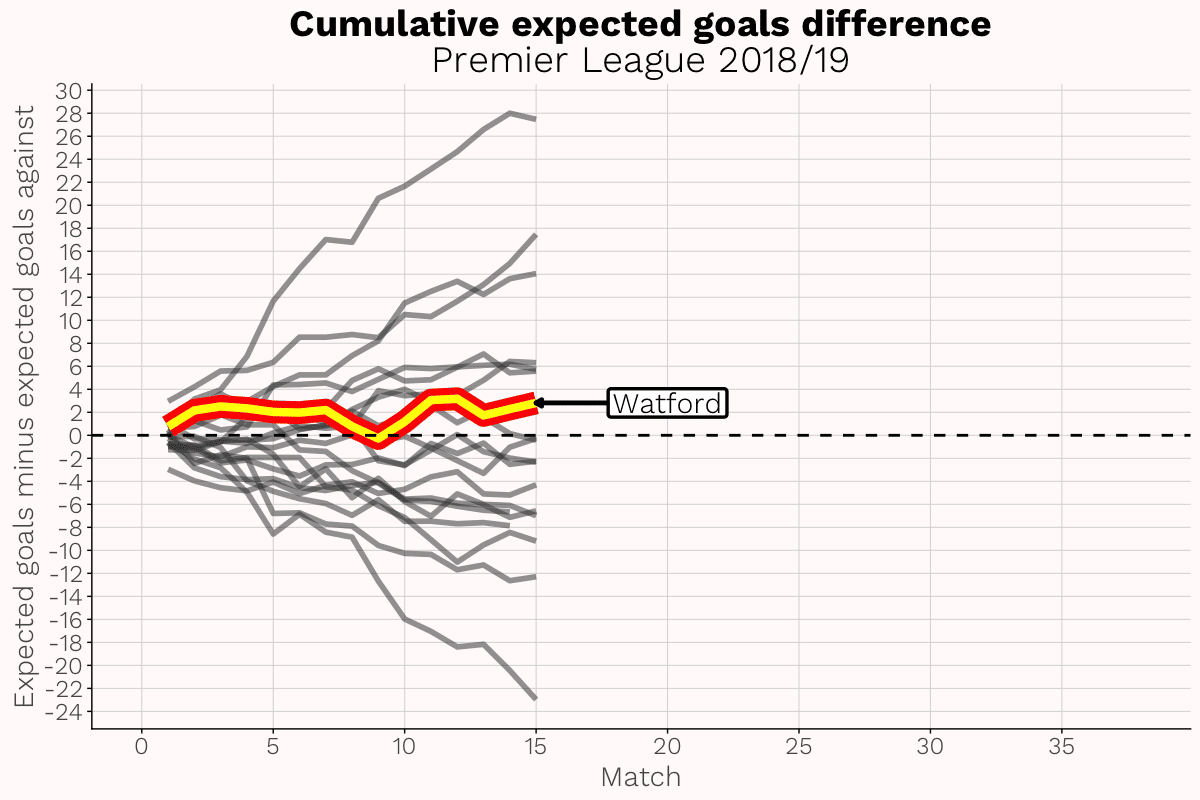 The performance in midweek against Manchester City will be encouraging, though. Against the best in the Premier League, they garnered 2.5 expected goals, according to Football Whispers’ model.

This is the first time in a league match this season that City have conceded more than 1.0 expected goals from open play – although the best of these opportunities came from the slight scramble immediately before Abdoulaye Doucouré’s goal.

That said, they had joy both through physicality — crosses and headers — as well as springing attacks after successfully pressing City. This combination of brawn and pressing nous has been something that Watford have had about them all season.

When Gracia’s side get it right, their 4-2-2-2 can be a dangerous counter-attacking proposition, but their physicality means that they’re able to dig in or turn to a Plan B if they need to.

The festive period will be a bigger indicator for Watford than it will for other teams. So far, the Hornets have tended to face the harder sides at home while their away trips have been to smaller clubs. December is when that starts to change.

On Monday they travel to Everton to take on former head coach Marco Silva, two weeks later they visit West Ham, these are two sides who are fellow ‘upper mid-table’ quality teams.

The game against the Hammers leads into a run of two games a week, hosting Chelsea and Newcastle United before heading to an impressive Bournemouth.

The signs are that Watford are a better-than-average midtable side who, if things break their way, could threaten to qualify for Europe.

How likely things are to break their way, though, will depend a lot on their December results.