Jamie Vardy is no longer having a party.

The Leicester City No.9 was in electric form earlier in the season, netting 17 times in 18 matches, but his form has dramatically tailed off and he hasn’t found the back of the net for two months.

This slump in front of goal has coincided with the Foxes winning just three of their last ten in the Premier League. Losses to Manchester City and Liverpool were expected. Defeats at the hands of Burnley and Southampton, however, weren’t.

Brendan Rodgers’ side still look like a shoo-in for a top-four finish but their lead over Chelsea is now down to six points while Manchester City now hold a seven-point advantage over them in second position.

Remarkably, Leicester are only two points shy of their points total for the 2018/19 campaign and Vardy is just one goal off his tally for last term. It’s easy to overlook the job Rodgers has done at the King Power Stadium but, at the same time, the current run of form should be a cause for concern.

Vardy was running seriously hot in the early stages of the season and it was inevitable the 33-year-old's form would go cold at some stage. But few envisaged him going almost 600 minutes without a Premier League goal.

So what has gone wrong for the Red Bull-drinking forward? And why hasn't Rodgers looked to rectify it?

The former England international's decline has been scary. His open-play expected goals average dropped from 0.49 to 0.21 (per 90). Vardy went from being expected to score one goal every two games to needing five games to get to the grand total of one expected goal.

His post-shot open-play expected goals average decreased from 0.6 to 0.18. Vardy went from adding real value to his efforts with his shot placement to devaluing shots with poor finishing. 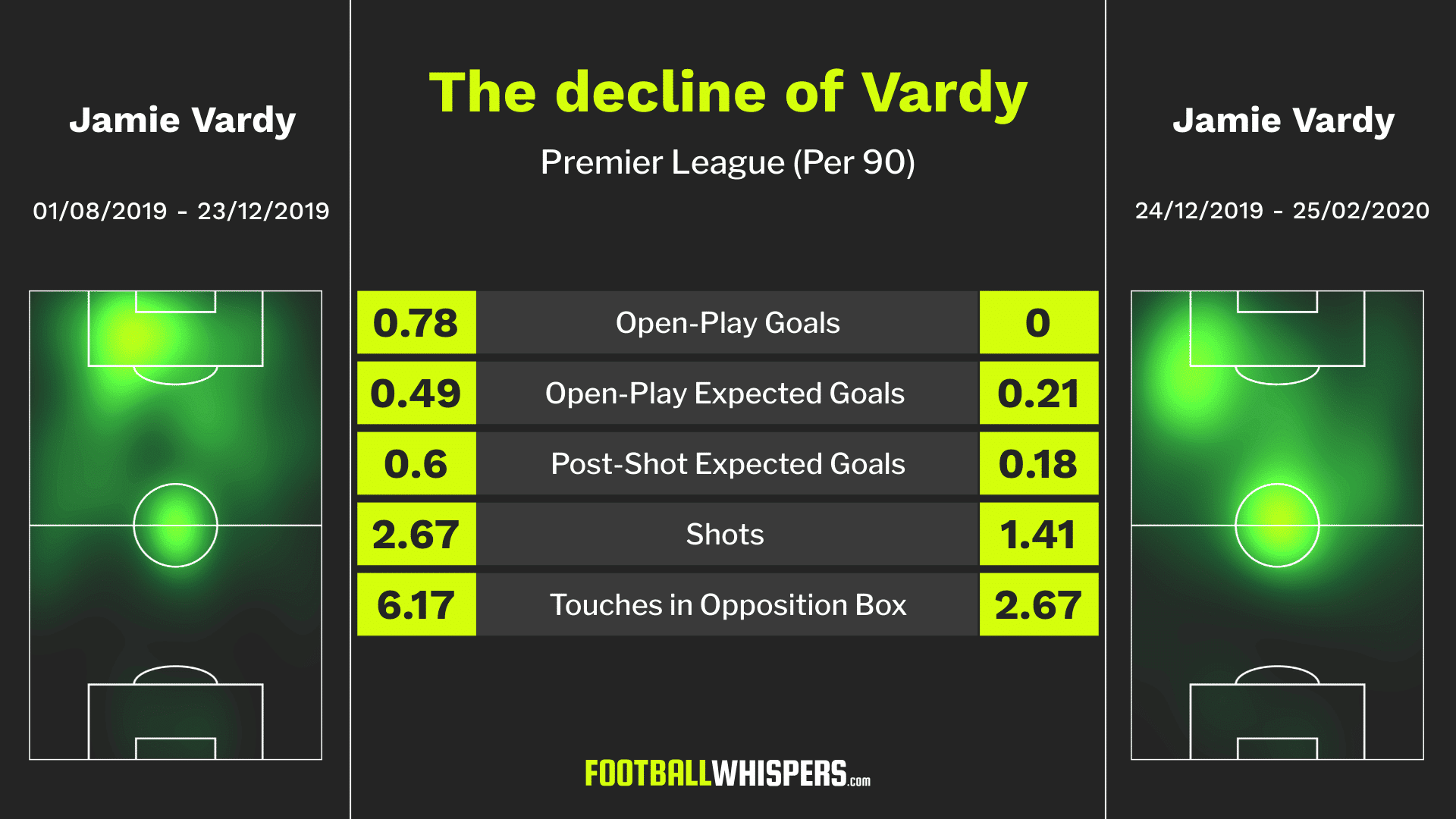 The former Fleetwood Town man is now averaging just 1.41 shots per 90, down from the 2.67 he was managing earlier on in the season. In fact, Vardy was landing more shots on target (1.61) than he's now taking in total. Since Christmas Eve, the Leicester forward has managed just four shots on target in the Premier League.

The No.9 went from having 6.17 touches in the box to averaging fewer than three. The Foxes are depriving their prized penalty box predator of service.

Until the loss to Manchester City on December 23, Leicester were averaging 15 shots per 90. Since then, however, this figure has dropped to 12. A difference of three might not seem like much but, over the course of a season, that's 114 shots.

Chances created are also down, falling from 10.89 to nine, while Rodgers' side are taking ten fewer touches in the box (per 90). Passes attempted dropped from 521 to 508 while completed passes in the final third fell from 107 to 93.

At first glance, Leicester appeared to have a Vardy problem. In reality, however, their problems are much worse and their spluttering attack is a byproduct of this slump in general.

Rodgers has tried to mix it up over recent matches, deploying Harvey Barnes on the left and shifting James Maddison into central areas against Chelsea and Wolverhampton Wanderers. They even went with a new system in the game against City recently, using a 3-5-2 shape.

On one hand, it's a positive that Leicester are trying new things to halt this poor run of form. But too much change can be detrimental to the flow of a team. Rodgers needs to decide on a system and playing style and stick to them for a handful of matches.

Rodgers needs to fix this, quickly, to ensure all of the good work in the first half of the campaign doesn't go to waste. When Vardy starts firing, Leicester will start winning.