Bushy haired and willing to work hard despite technical limitations, one might have expected Marouane Fellaini to become a cult figure at Manchester United following his £27.5million switch from Everton in 2014.

Yet the Belgian has never endeared himself to the Old Trafford faithful, with the nadir in his relationship with United’s fans coming as he was booed when brought on in stoppage time of their 1-0 victory over Tottenham Hotspur in December.

A week earlier Fellaini had been on the pitch for less than five minutes before giving away a late penalty, which Leighton Baines duly converted, helping Everton to claim a point in a game the Red Devils had dominated. As far as the supporters were concerned, that was one mistake too many in a two-and-a-half year spell that has shown the 29-year-old to be error-prone and clumsy on the ball.

In fact, speaking after the Spurs win, Jose Mourinho even admitted that he understood why Fellaini was booed.

“I had that feeling. I accept it because from the fans you have to accept everything and especially fans that are giving so much without getting so much.

“They have in their mind the mistake that Marouane did at Everton and no more than that.”

However, the Portuguese manager went further, pledging his support for the midfielder.

“He is a player and a person I like and the person is more important. He will always have my trust and protection.” 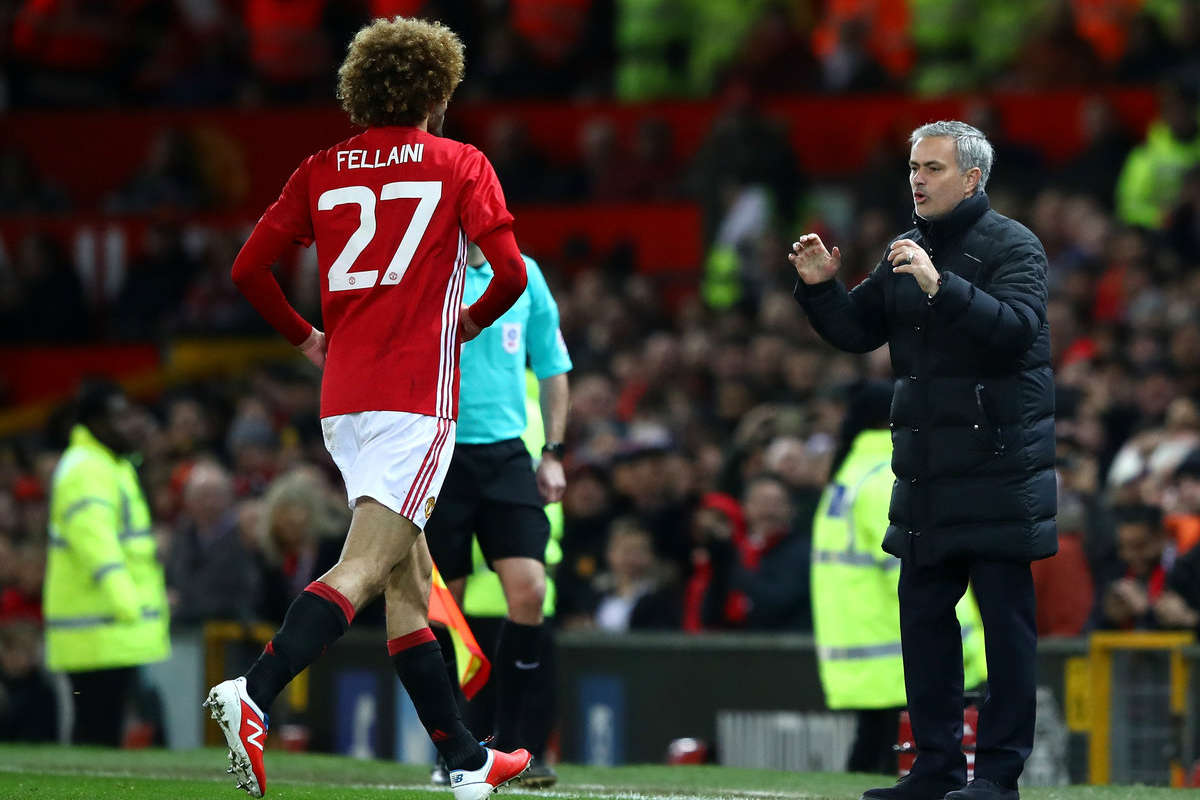 So why the loyalty to a player that many fans and pundits deem not good enough to wear the famous red shirt? Indeed, Mourinho has taken against a number of first team squad members, selling Memphis Depay and Morgan Schneiderlin, while Luke Shaw, Matteo Darmian and even club captain Wayne Rooney have fallen out of favour. In fact, only six first-team outfield players have made more appearances than the Belgium international — even if almost half of those came from the bench.

In a team awash with technically gifted individuals it is likely his role as a unique option for his manager that ensures he retains a regular role. There is no one Mourinho can bring off the bench that can do what Fellaini can do — namely cause havoc in the opposition’s box when United are chasing the game.

Liverpool discovered this to their cost last month when, as the furthest player forward for United, he flicked on a Rooney cross onto the post, before Antonio Valencia set up Zlatan Ibrahimovic for the equaliser seven minutes from time.

Prior to Fellaini’s introduction, the hosts had struggled to generate chances, with Dejan Lovren and Ragnar Klavan both marshalling Ibrahimovic well.

You can see this in action below. Ander Herrera picked up the ball on the edge of the Liverpool area, but the lone forward is marked by two Liverpool defenders and they are able to clear the ball comfortably. 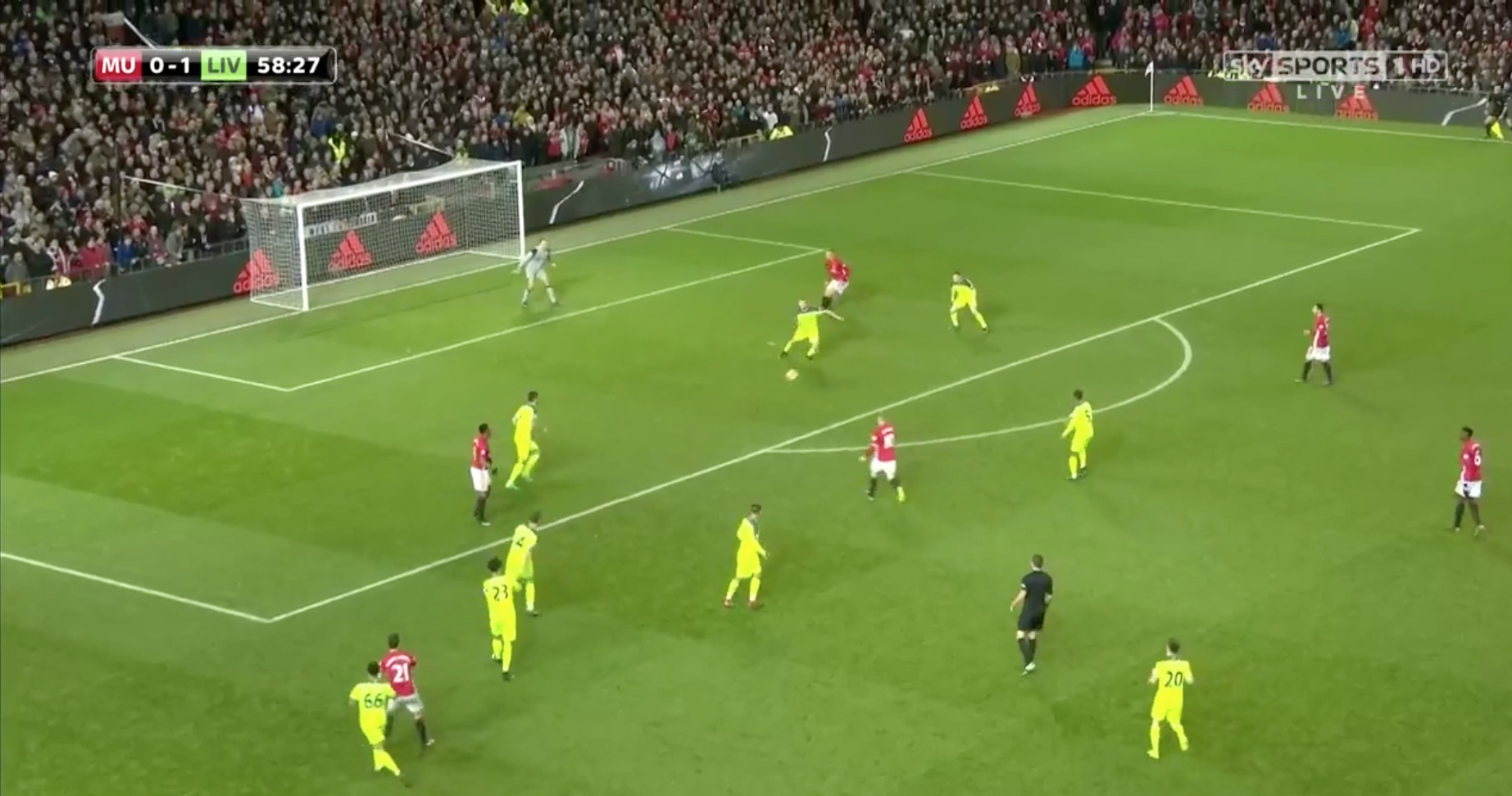 Fellaini’s presence gave Jürgen Klopp’s men something to think about, eventually leading to the penalty area scramble that led to the goal.

When Mourinho needs to mix things up against an opponent defending deep, he’s his best option.

Will Fellaini still be there next season?

Although Marouane Fellaini undoubtedly provides an element of a chaos into a game when required, the stats suggest his impact is minimal in reality.

Since joining on deadline day in 2013, Fellaini has scored just seven league goals, the last of which came in a 2-1 defeat at Bournemouth in December 2015, while he has provided just one assist in the Premier League in that time.

This would be more forgivable if his defensive contribution was stronger, but his average of just three defensive actions per game this season (it was two per game last season) is comfortably outstripped by Ander Herrera (six) and Michael Carrick (five) who typically occupy the central midfield for United.

He may win more headers than his midfield counterparts, but then few of his teammates receive the ball into their head as often as the 6’3” midfielder.

The Old Trafford club took the option of triggering a 12 month contract extension in January, keeping Fellaini at the club until summer 2018, but could that have just been to ensure they don’t lose him for nothing at the end of the season? The 74-times capped international may be a figure of fun for some, but it is likely he would still be of interest to a number of clubs lower down the Premier League, or abroad.

It is expected that Mourinho will be handed a sizeable war chest to overhaul his squad in order to mount a serious title challenge (and, they would hope, Champions League campaign) next season, and there is no guarantee that Fellaini will remain so high up in the pecking order should one or two more midfielders of genuine quality be brought in.