Danny Rose's now infamous interview with The Sun appeared to be the beginning of the end for the defender at Tottenham Hotspur.

On the eve of the new season, he questioned Spurs' transfer policy. Admitted he didn't agree with the club's wage structure. And stated he would be willing to listen to offers from other Premier League sides, particularly those in the north of England.

Rose may disagree but the interview appeared a far from nuanced come-and-get-me plea to Manchester United, who had constantly been linked with a move for the full-back throughout the summer.

“One thing is for sure — I know my worth and I will make sure I get what I am worth. I am not playing as well as I have done not to get paid what I think I am worth.

“In any walk of life, if you think you are worth a certain amount, why settle for less? I am not that person,” he said.

The interview, unsurprisingly, caused great controversy. And given he was ruled out until after the summer transfer window closed with a knee injury, it was certainly ill-advised.

Rose was stuck at Spurs, whether he wanted to be there or not. The 27-year-old made a hasty apology and claimed his comments were not meant to offend the chairman, Daniel Levy, the manager, Mauricio Pochettino, his teammates and the club's fans

Fast forward to October and Rose made his return as a late substitute in a 1-1 draw in against Real Madrid at the Santiago Bernabéu. It was a change Pochettino didn't have to make, but one that demonstrated his character; he was willing to move on.

“I thought him putting me on against Real Madrid, even though it was only for 10 minutes, was a class act on his part,” Rose told The Independent.

“Me and the gaffer are fine. We speak most days. The last three years, the lads will tell you I am the one in his office the most, speaking to him and going through videos and sharing text messages. Even going round his house. He has been great at integrating me back into the team and getting me some minutes.”

Since his return against Real in October, Rose has gone on to make nine more appearances. The form of Ben Davies has restricted his minutes, he's only managed 700 in all competitions, but another knee problem sustained at the end of December has kept him out over the past month.

And while Rose has been stuck on the sidelines, potential suitors have moved on.

Luke Shaw has finally managed to win over José Mourinho at Manchester United and the Portuguese said earlier this month: “I can say in this moment I don't see many left backs better than this Luke Shaw.”

Chelsea, meanwhile, are close signing Roma's Emerson Palmieri as a back-up option to Marcos Alonso. Manchester City spent £52million on Benjamin Mendy and will want to leave his path to the first-team clear when he returns to fitness. Liverpool have the impressive Andrew Robertson and Tottenham wouldn't sell Rose to Arsenal.

Clubs abroad are also unlikely to pay what Tottenham would demand for Rose which means his options for a move away are very limited. It leaves him in a difficult position.

Rose is contracted until 2021 and has slipped out of many interested sides' consciousness after an injury-hit season. Spurs are now in charge of his destiny, which is everything he attempted to change when he conducted that interview in the summer.

So where do Rose and Tottenham go from here? There are several different pathways to take but one appears the most obvious and is backed up by the numbers; give the full-back a chance to shine when fit. 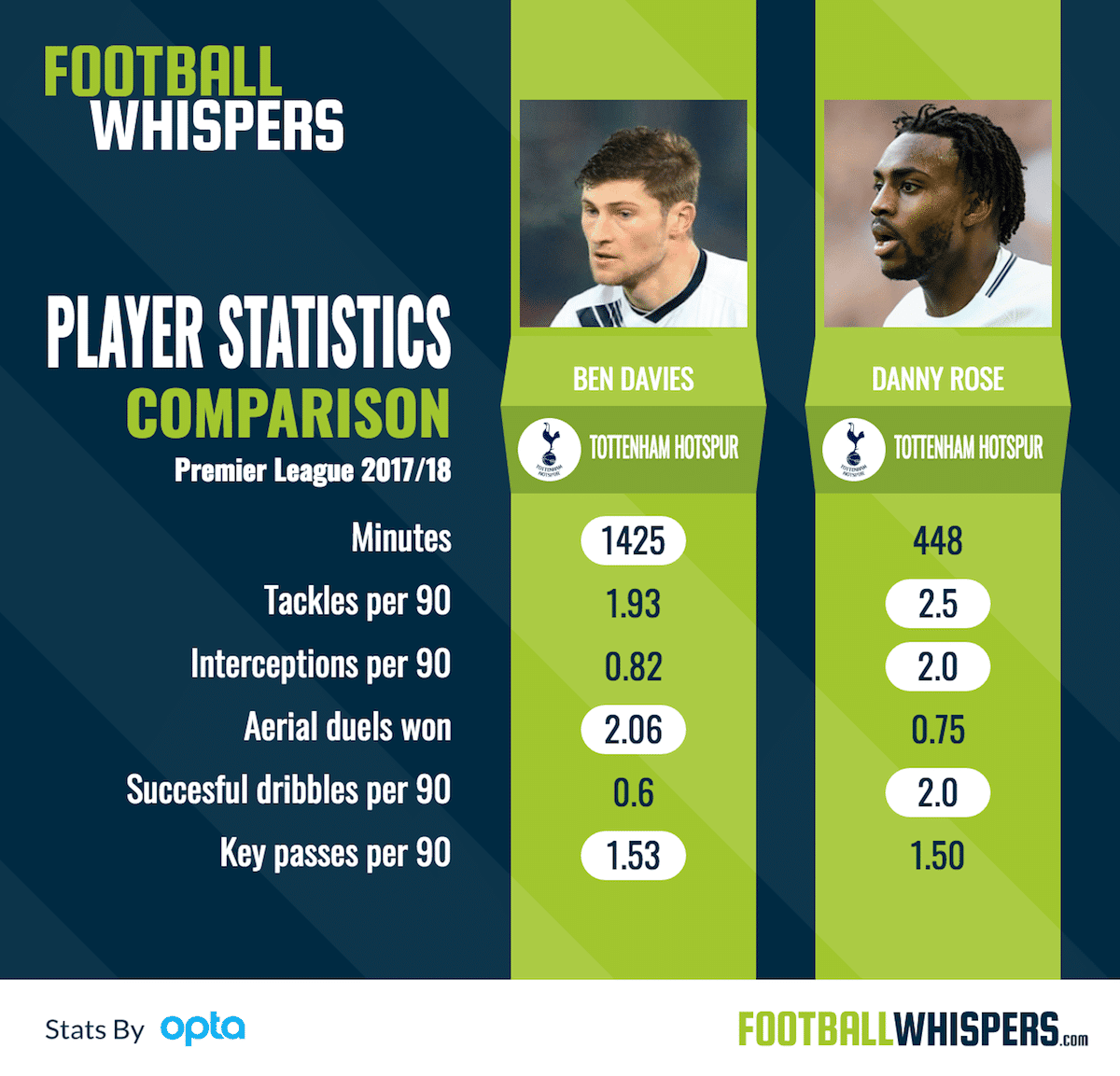 There is no doubt Davies is having a fine season on the left flank for Spurs and given he is three years younger, it can be argued that it makes sense for Tottenham to place their faith in the Wales international.

But when compared to Rose, whose sample size is admittedly smaller, Davies isn't matching the former Leeds United youngster in Premier League action.

Davies does win more aerial battles (2.06 to 0.75) – which is expected given his height advantage – and is playing marginally more key passes per 90 (1.53 to 1.5), but it's clear Rose is making more of an impact when he features.

Of course, simple statistics shouldn't be taken as gospel. Rose featured largely against weaker sides as he built up his fitness after several months out. Tottenham won many of those games comfortably, so it's unsurprising he performed well.

But it does demonstrate the impact Rose has in the Tottenham side, even when not 100 per cent match fit.

It's why when he returns from his latest knee problem, it makes sense for Pochettino to once again place his trust in Rose, who will need to excel to earn a place in England's squad for the World Cup.

It's a win-win situation for Spurs. If Rose impresses, Tottenham benefit and their chances of securing Champions League football for their first season in their new stadium are improved. The defender's price tag also increases and he puts himself in the shop window ahead of a summer in which Spurs may consider selling.

If he fails, however, then clubs' interest wanes further, none are willing to match Tottenham's asking price in the summer and Rose is left without any option but Spurs.

The next six months of his career will be vital for Rose. He will either flourish once again or continue to wilt. Either way Tottenham are in control and he'll have accept that.