Rangers' signing of experienced English striker Jermain Defoe has been hailed for how it symbolises the club's ambition, with Steven Gerrard's side determined to challenge Celtic's dominance of the Scottish Premiership.

Celtic remain top of the table at present, ahead of their cross-Glasgow rivals on goal difference with one game in hand, despite a shock Old Firm defeat over the festive period.

With Rangers having wrapped up the acquisitions of Defoe from Bournemouth and former captain Steven Davis from Southampton, there have been calls for the reigning champions to respond with a statement signing or two of their own.

The Bhoys appear to have done just that, closing in on one of the most recognisable names in world football – the family name, that is. Son of former World Player of the Year George, Paris Saint-Germain youngster Timothy Weah is on the verge of a switch to Glasgow's East End.

The 18-year-old striker has been identified as the man to further bolster the firepower of the Scottish top flight's highest scorers. And PSG will be thankful of the regular first-team football Weah will experience at Celtic Park, with the youngster currently behind Kylian Mbappé, Neymar and Edinson Cavani, among others, in the Parc des Princes pecking order.

Being unable to unseat such talented individuals at the age of 18 is certainly no slight on Weah, who has already been capped eight times for his native USA and impressed during six competitive senior outings for the Parisians to date, as well as on last summer's tour of the United States. 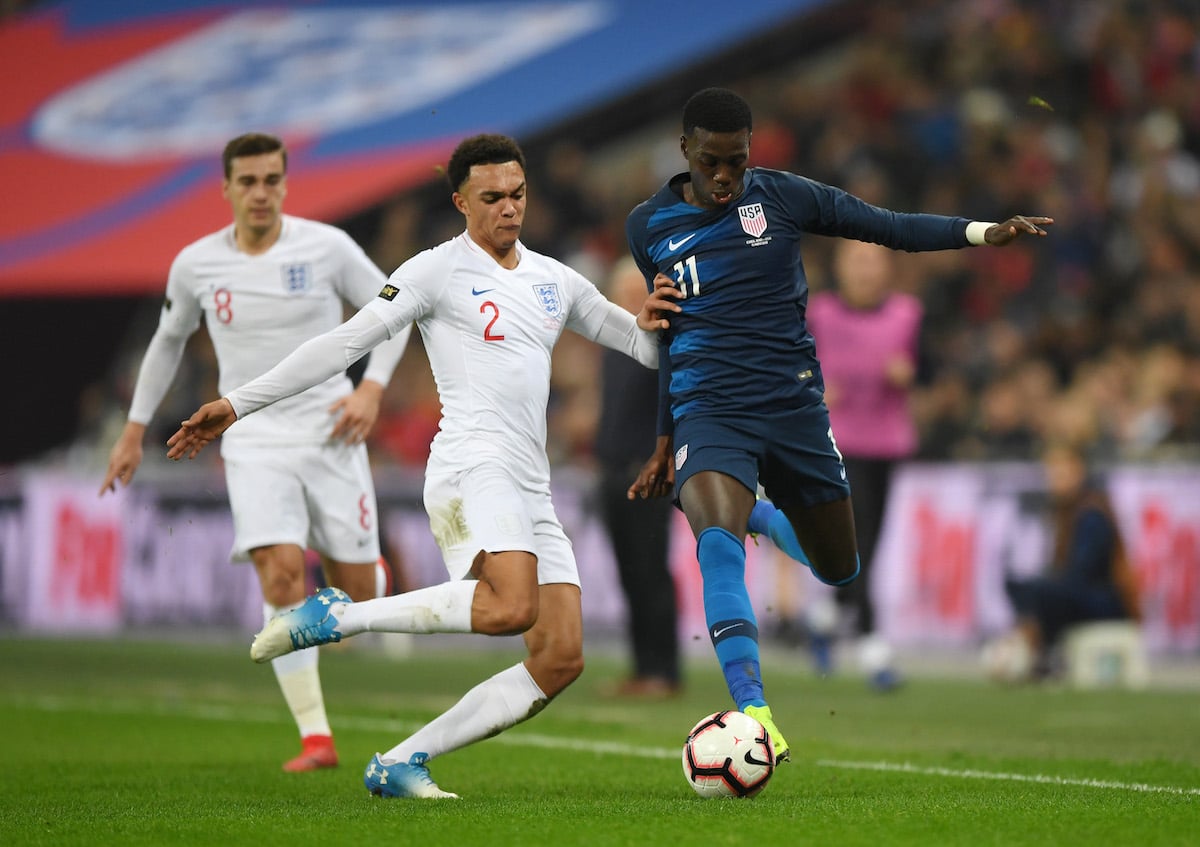 “Timmy has an outstanding combination of endurance and speed, and now we have to make him aware of this,” PSG coach Thomas Tuchel enthused after the youngster's scoring performance against Bayern Munich at the International Champions Cup in July. “These are his main weapons.”

“He will have to understand the team, the rhythm, the play, when to attack, when to use his speed, when to wait and not go to early and be caught offside,” Tuchel continued, outlining the areas of his game Weah must improve.

“But the basics are there at a very high level and it’s an outstanding combination. From now on, we’ll push him forward and when he’s willing to be concentrated, to step up in every training session, then we’ll push him.”

And push him they did. With a handful of their top stars recovering from World Cup exertions earlier this season, Weah started and scored in the Trophée des Champions – the French equivalent of the Community Shield – against Monaco, then scored again in the opening game of the Ligue 1 season, coming off the bench against Caen.

The return of the regulars has since limited Weah's opportunities, hence why PSG are now seemingly willing to allow him to continue his development out on loan. But there is plenty the teenager can offer Celtic.

The most notable assets Weah possesses are his speed and close control, making him a threat behind high defensive lines. What is perhaps a surprising facet of his skillset, however, is his physical strength, with the slender New Yorker able to hold off challenges from more robust-looking defenders. 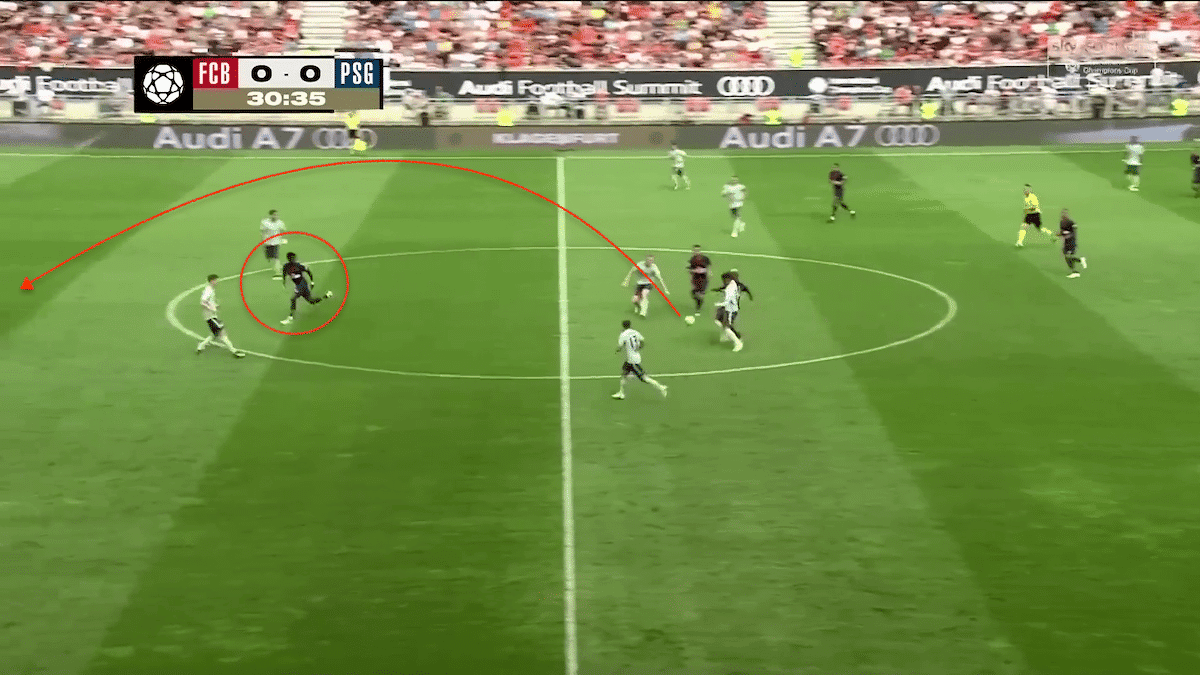 These attributes were in full effect in his goal against Bayern last summer. As we see above, Weah was released in behind the Germans' defence with a lofted ball over the top.

At the time the pass was played, Weah had two Bayern defenders for company, both of whom had a small head start in the race for the ball. 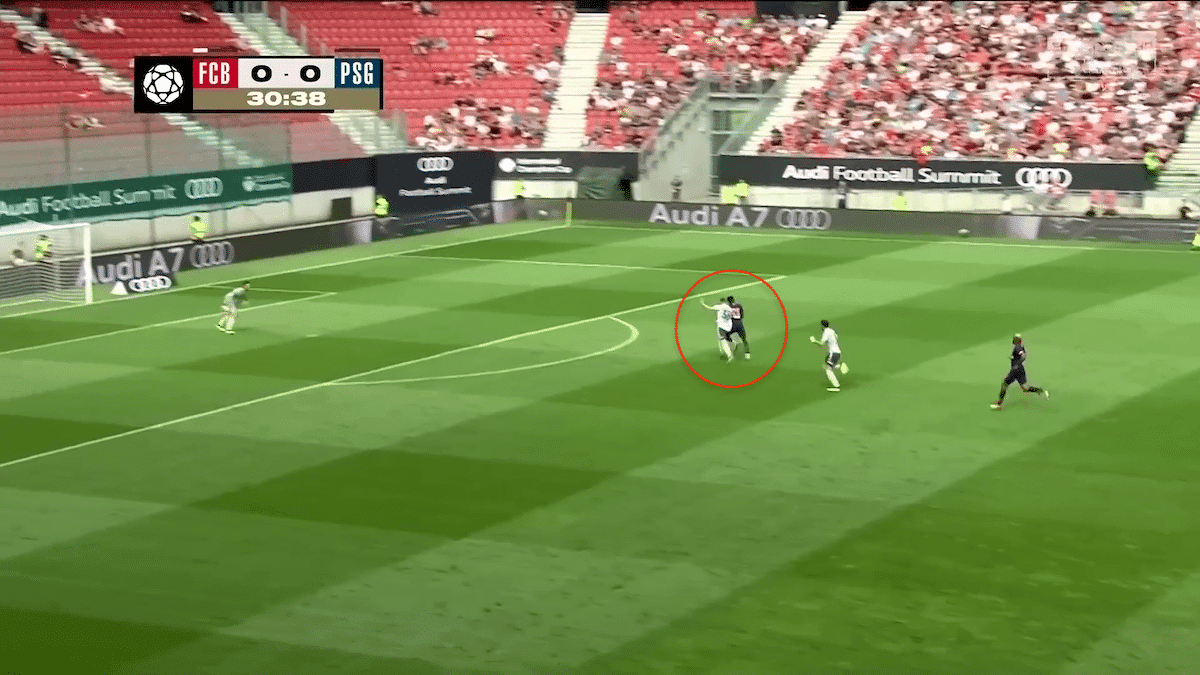 Weah's pace took him away from one defender, while his upper-body strength allowed him to hold off the close attention of the other, shoulder to shoulder for several yards until they entered the penalty area. 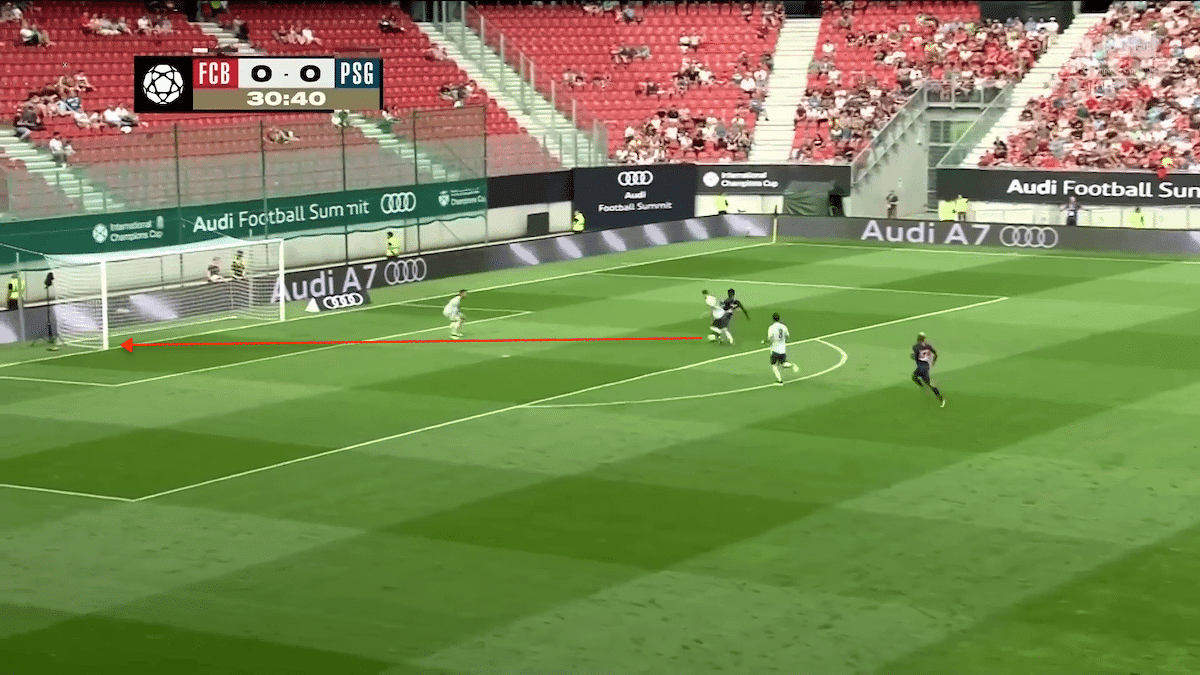 Then, despite being slightly off-balanced at the last, Weah rifled a right-footed strike low into the far corner.

At Celtic Park, Weah will find himself competing for game time with another graduate of PSG's academy – which he joined as a 14-year-old, leaving the New York Red Bulls' youth set-up – in the shape of Odsonne Édouard.

While the pair share stylistic likenesses, Édouard is a more conventional No.9 than Weah, with the American prone to drifting wide in search of space, thus opening up channels for midfield runners to break into. 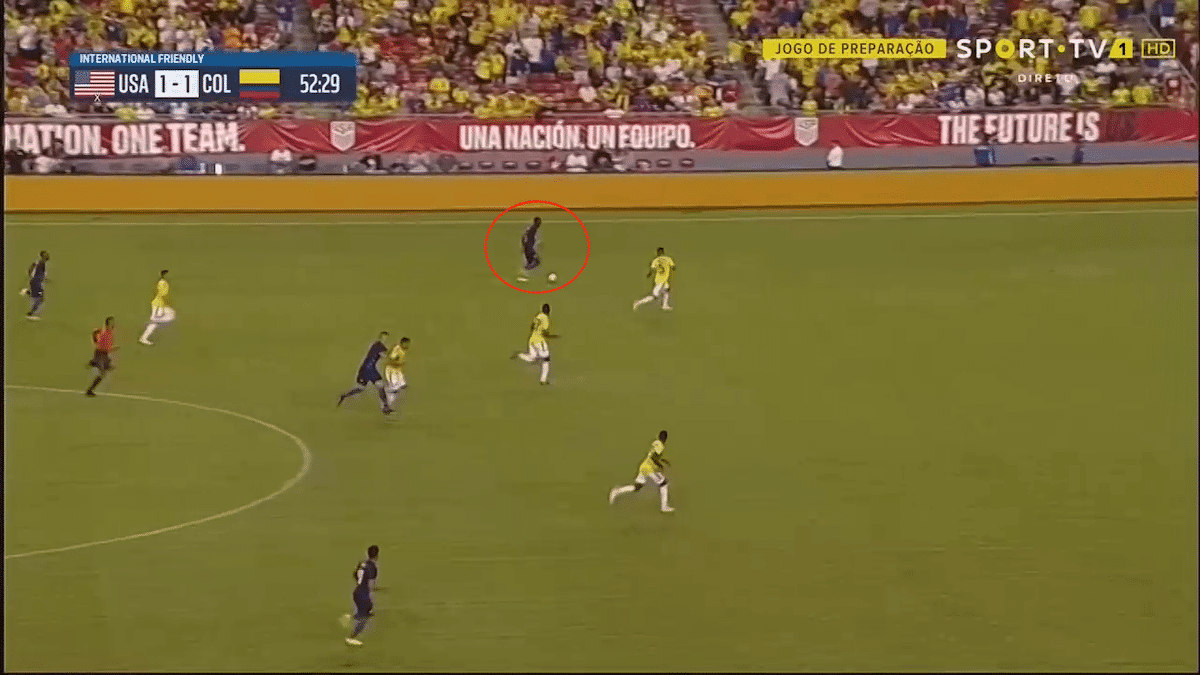 Here, in action for the USA, we see Weah stationed wide on the left flank. Employing his pace and dribbling skill, he carries the ball forward at speed, attacking the Colombian backline. 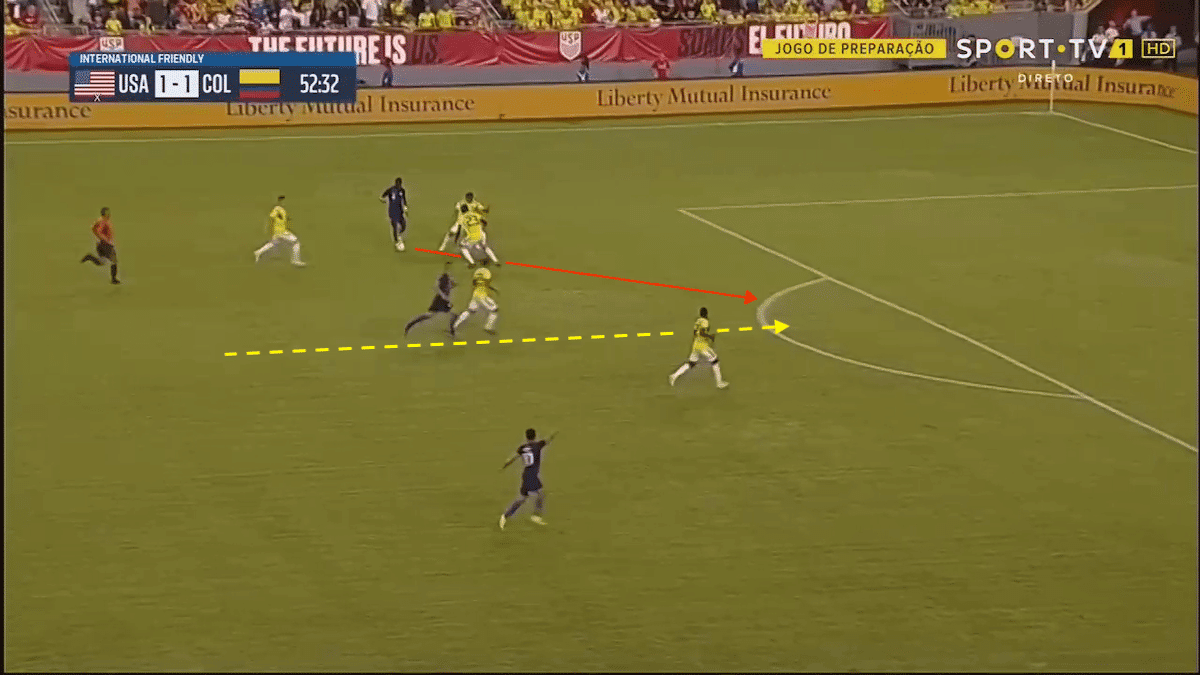 He then cleverly draws two defenders toward him as he cuts inside on to his right foot. This creates a pocket of space for Bobby Wood to burst into.

Weah then calmly slips the ball between two yellow shirts and perfectly into Wood's stride, allowing the Hannover striker to score with a simple, first-time finish.

Considering his age and relative inexperience, what is perhaps most impressive about Weah is his work-rate. The PSG attacker is diligent in his duties without the ball, whether tasked with pressing high or tracking back. 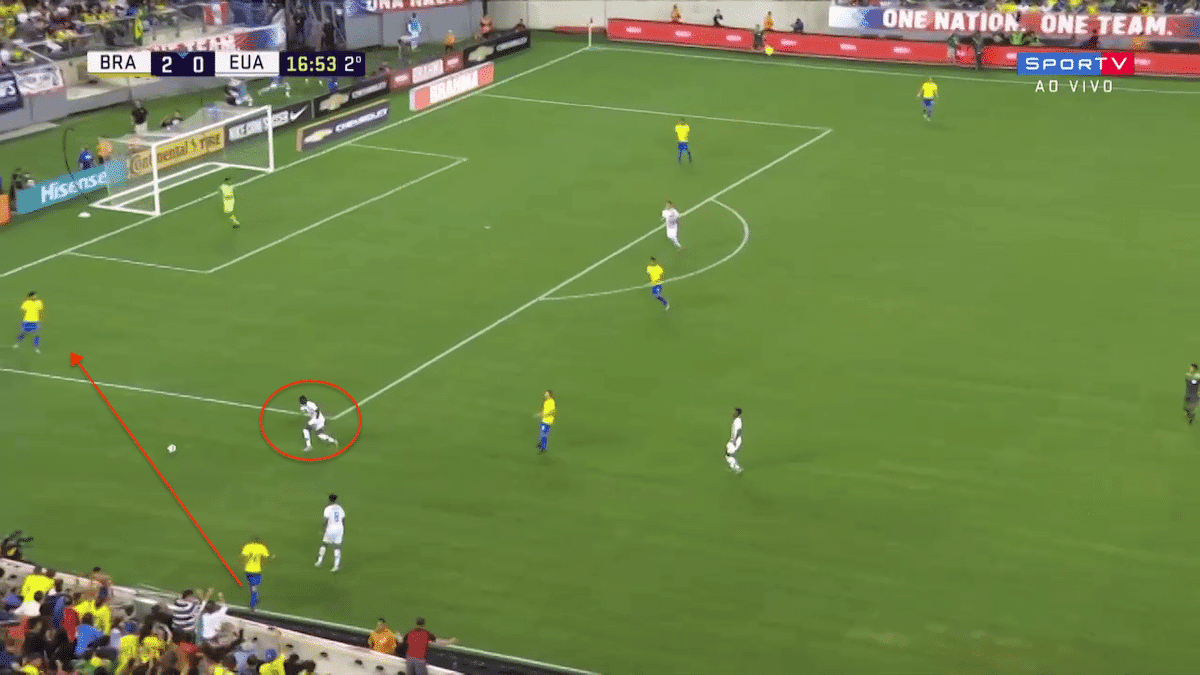 Above, again in international action, Weah displays his commitment to regaining possession. Brazil are looking to build from the back, playing the ball between defenders to draw the USA out of their shape and open up passing lanes further forward.

As right-back Fabinho passes to Weah's PSG colleague Marquinhos in central defence, the American youngster is 15 yards away from the ball. 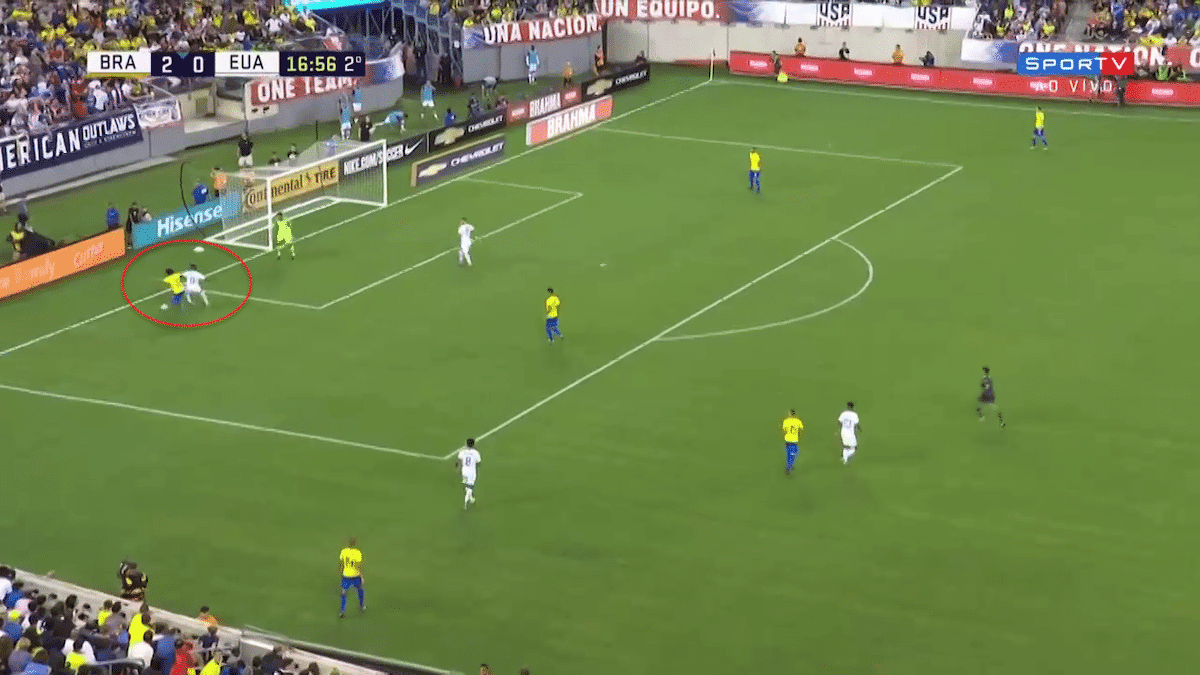 However, by the time Marquinhos, one of the finest ball-playing centre-backs in the world, has taken a touch, Weah is right on top of him. The US striker's pressure forces Marquinhos into conceding a corner. The 18-year-old's enthusiastic pressing conjured a profitable situation for his side from nothing.

The twin benefit of a loan move to Celtic for Weah is that the will be afforded regular minutes in a competitive league without the pressure of carrying his side's sole attacking threat, with Édouard on hand to share striking duties.

What Weah offers Celtic is an extra weapon in their attacking arsenal, one Brendan Rodgers will relish deploying.