The role of a defensive midfielder is becoming increasingly important to Real Madrid. Under Zinedine Zidane’s guidance, the club formerly renowned for its glitzy aura and commitment to attacking football have gained a resilient streak. This is all good news for Marcos Llorente.

A 22-year-old, who is a product of ‘La Fabrica’, the Spanish giants’ famed youth academy, Llorente is also an exciting central midfielder who has shown himself to thrive in a deeper position. His performances this season while on loan at Alavés have highlighted his quality as a midfield protector and supplier, and soon he may be strutting his stuff in the pristine all-white kit of his parent club.

This season, Real Madrid have topped La Liga for a prolonged period. They also look likely to reach the Champions League final for a second consecutive campaign having swatted city rivals Atlético aside with a 3-0 semi-final first leg win. Brazilian bulwark Casemiro has been at the heart of their successes.

Having broken out during the latter half of 2015/16, the 25-year-old has asserted himself at the base of Zidane’s midfield trio, operating behind Toni Kroos and Luka Modrić. And, while not as glamorous as his central colleagues, he has arguably proved more integral to the structure of the team as a whole.

Casemiro’s introduction to the starting lineup has facilitated a number of improvements.

Tactically, his presence in front of the central defenders has enabled left-back Marcelo to play at his adventurous, flying best, storming the flank like the frustrated winger he truly is. This, in turn, has allowed Cristiano Ronaldo to enjoy a freer role, drifting into more dangerous central areas with greater frequency.

Zidane’s deployment of Casemiro has also had the effect of offering increased support to Modrić and Kroos defensively. Now, the sophisticated double act can focus on closing off the half-spaces in the full knowledge that their canny, physical team-mate is directly behind them, diligently plugging any gaps.

However, this development has given rise to another problem: Who replaces Casemiro when he’s injured or suspended? 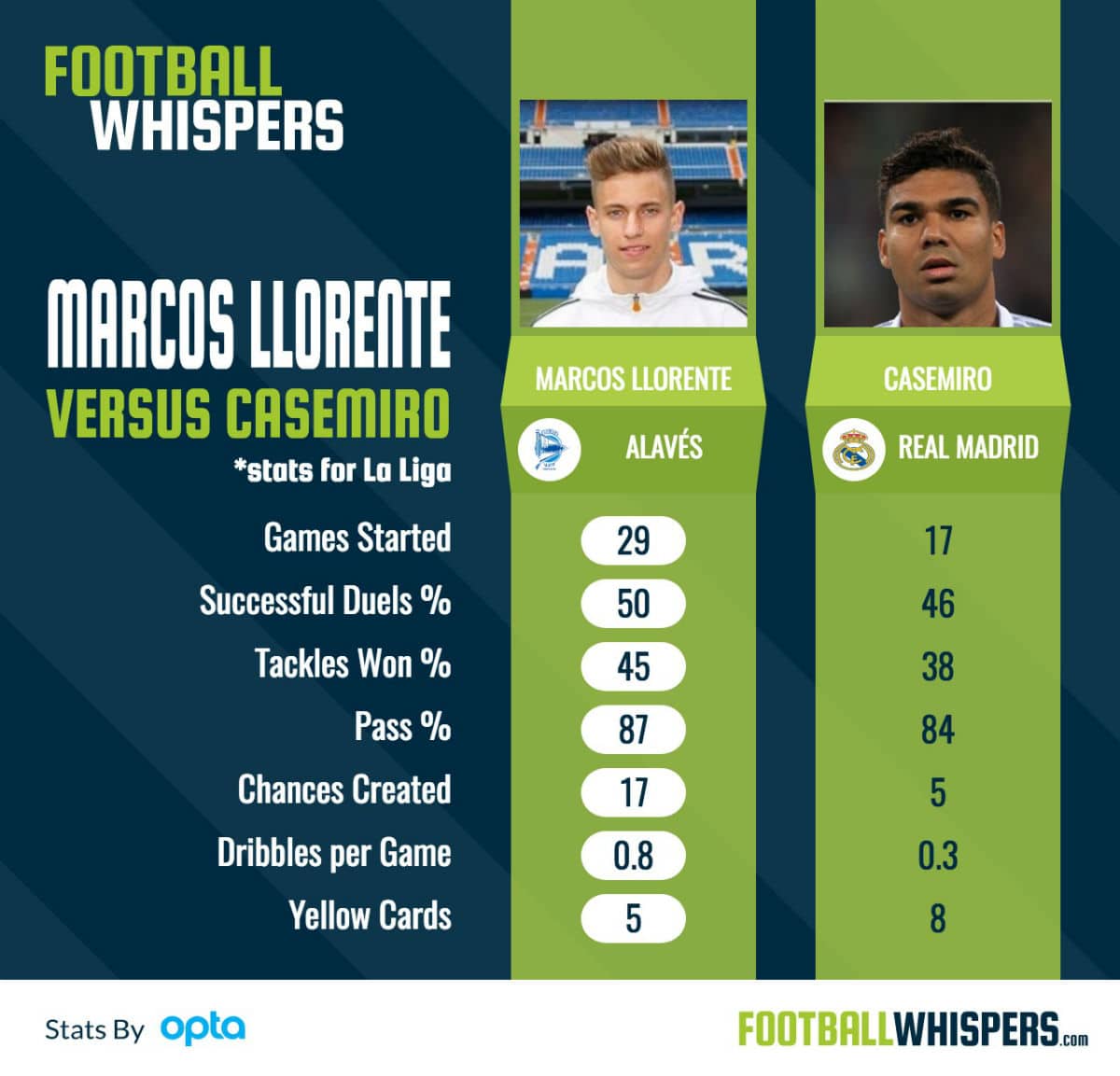 This concern was raised early on this season, when the pivot suffered an injury during a 2-0 win over Espanyol. There were suggestions at that time that Llorente would, or at least should, return early from his loan spell at Alavés, but Zidane returned a typically measured response.

“Casemiro is an important player and we hope he will recover soon,” he told the club’s official website.

“We did have Marcos Llorente in preseason, and he is a player that could have replaced Casemiro. But we took the decision that it would be good of him to play 30 or 40 games this season.”

Zidane’s response was one based on an intimate understanding of his young charge’s career needs—the Frenchman was responsible for Llorente’s promotion to the Real Madrid ‘B’ team back in July 2014 and spent one-and-a-half years managing the prospect.

So a January return to the Santiago Bernabéu was never on the cards, but the 22-year-old is almost certain to rub shoulders with Galacticos next season. And, when he does, he will be continuing a family tradition.

His father, Francisco, starred for Real Madrid in the late 1980s and early ‘90s, winning three league titles, two Spanish Cups, and four Spanish Super Cups along the way. And Francisco’s uncle – Marcos’ great uncle – was none other than Paco Gento, the legendary winger who was a key member of the side that won five consecutive European Cups in the 1950s and ‘60s.

Technically, this tradition has already been continued — Llorente appeared for the first team last term. But on the basis of the player’s form throughout 2016/17, he could follow his father and great uncle in becoming a core squad member in the coming months.

Alavés progress this season has been a pleasant surprise. After winning the Segunda Division to earn promotion and a change of managers over last summer, they avoided an immediate return to the second tier with a comfortable mid-table berth.

Two ingenious loan signings have been elemental to the Basque outfit’s achievement. One is Theo Hernández, a powerful left-back brought in temporarily from Atlético Madrid. The other is, of course, Llorente.

In a team that averages just over 46 per cent possession of the ball, the midfielder has perhaps unsurprisingly had to do a lot of defensive work. But he’s taken brilliantly to the task, completing more interceptions per game than any other Alavés player and averaging more tackles than all bar two players – one of which is Casemiro – in the entirety of La Liga.

However, featuring at the base of midfield, Llorente has also demonstrated an abnormal quality on the ball, a quality not seen elsewhere in the Alavés lineup.

On average, he completes 56.8 passes per game, which is almost 20 passes per game more than the team’s next-highest contributor in this respect. On top of that, he has a pass success percentage – 87.2 per cent – that is higher than any of his team-mates.

The below graphics illustrate some of Llorente’s ability on the ball.

Here, he finds the forward passing lane to his team-mate cut off by two Sevilla players. 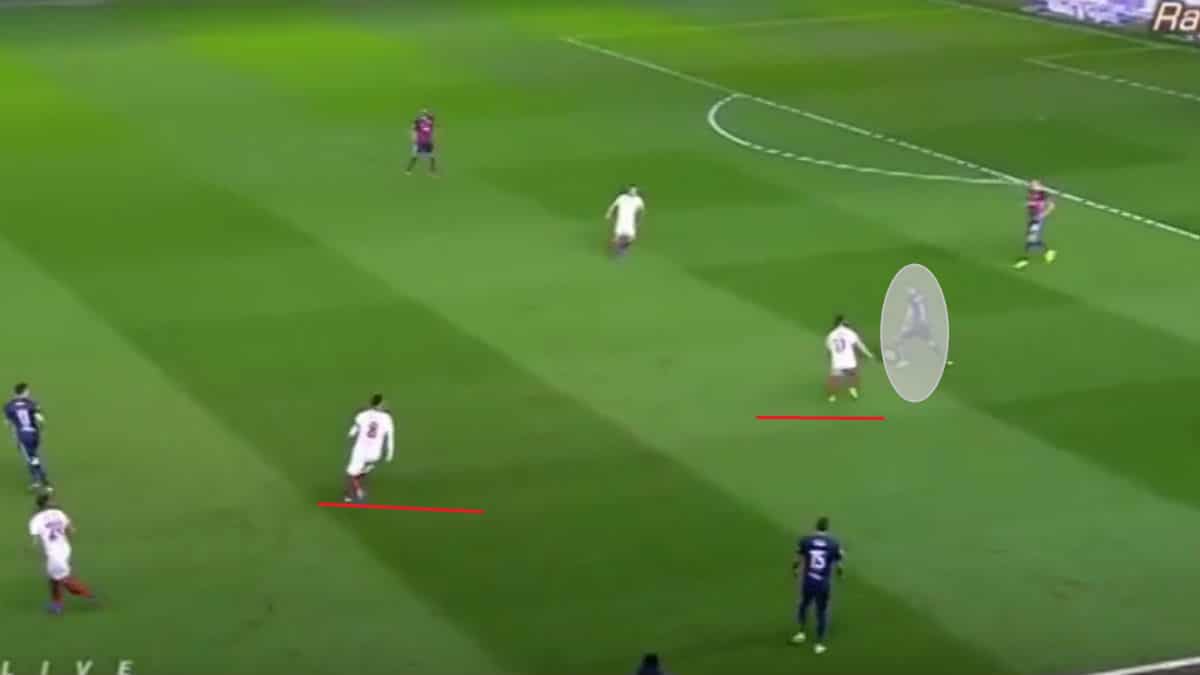 However, rather than play sideways or backwards, he turns quickly onto his left foot, showing exceptional composure, and opens up the passing lane. 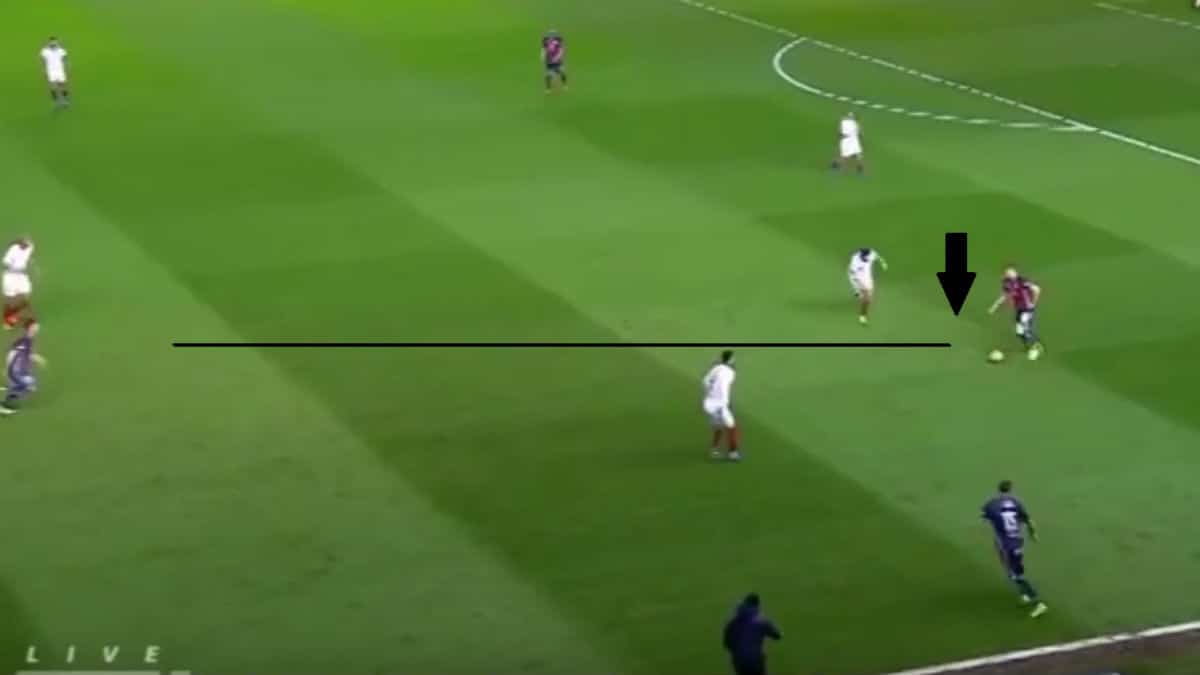 Below, Llorente finds himself under pressure from two opponents, who are closing him down on each side. 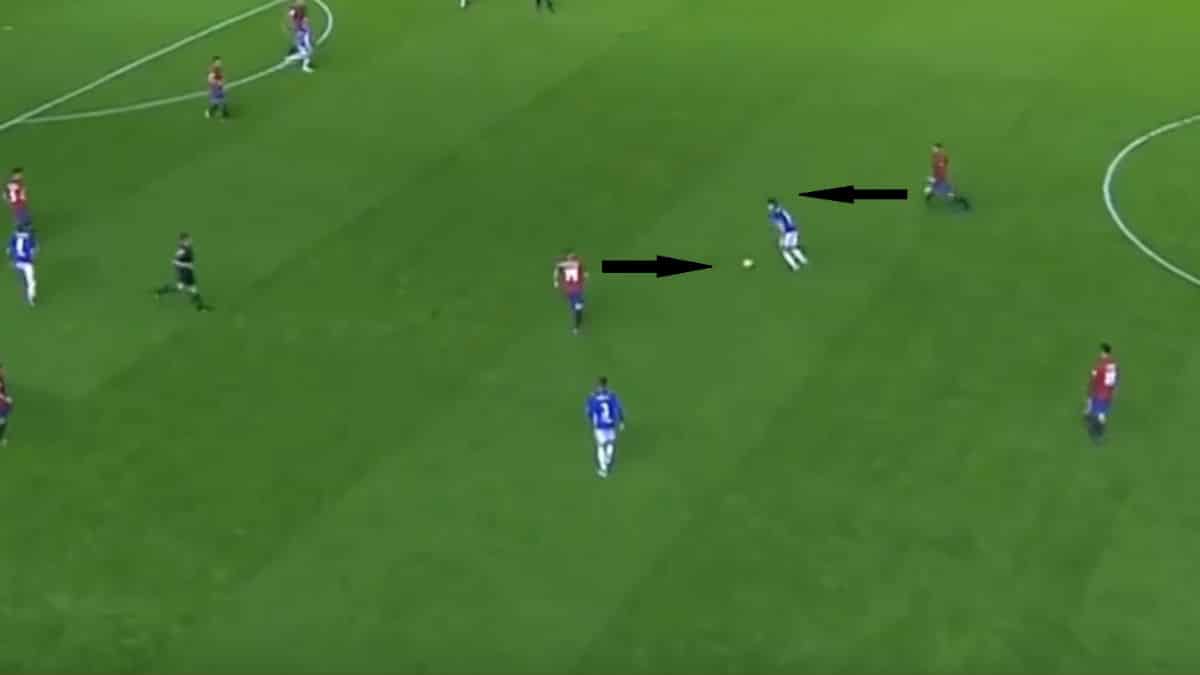 However, highlighting superb technique and ability to play out of tight spaces, he drags the ball back, taking both opponents out of the game, before playing the ball wide to a team-mate. 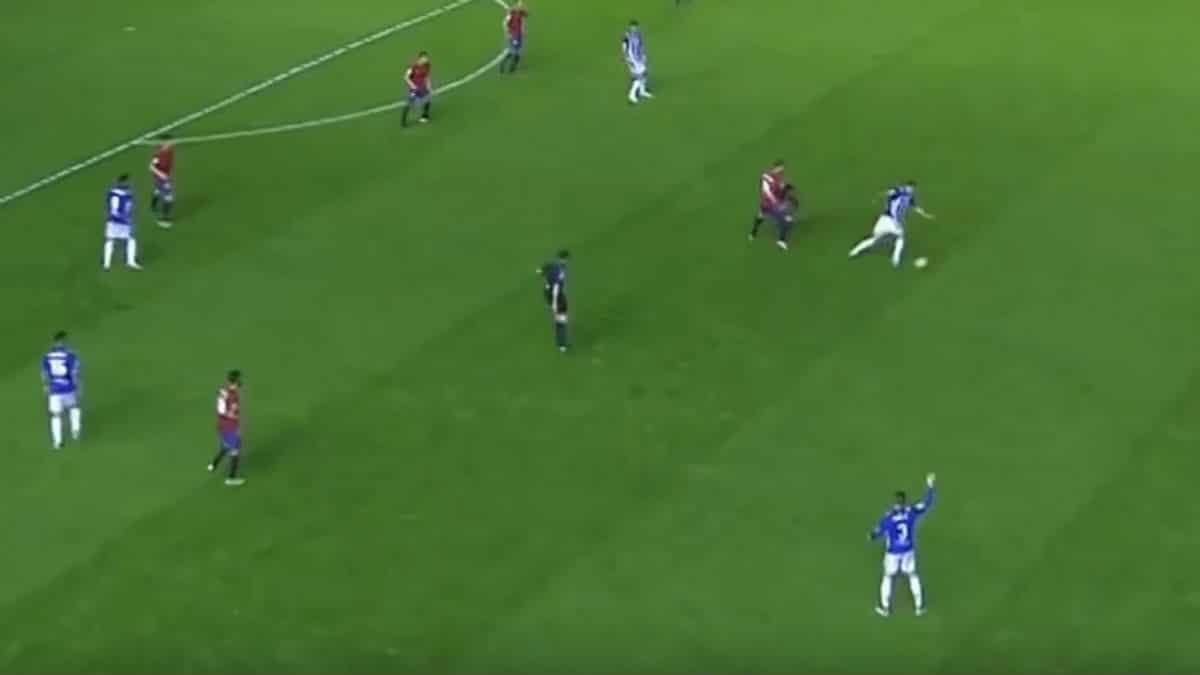 In the below graphic, Llorente finds himself attentively man-marked by an opponent as the ball comes to him. 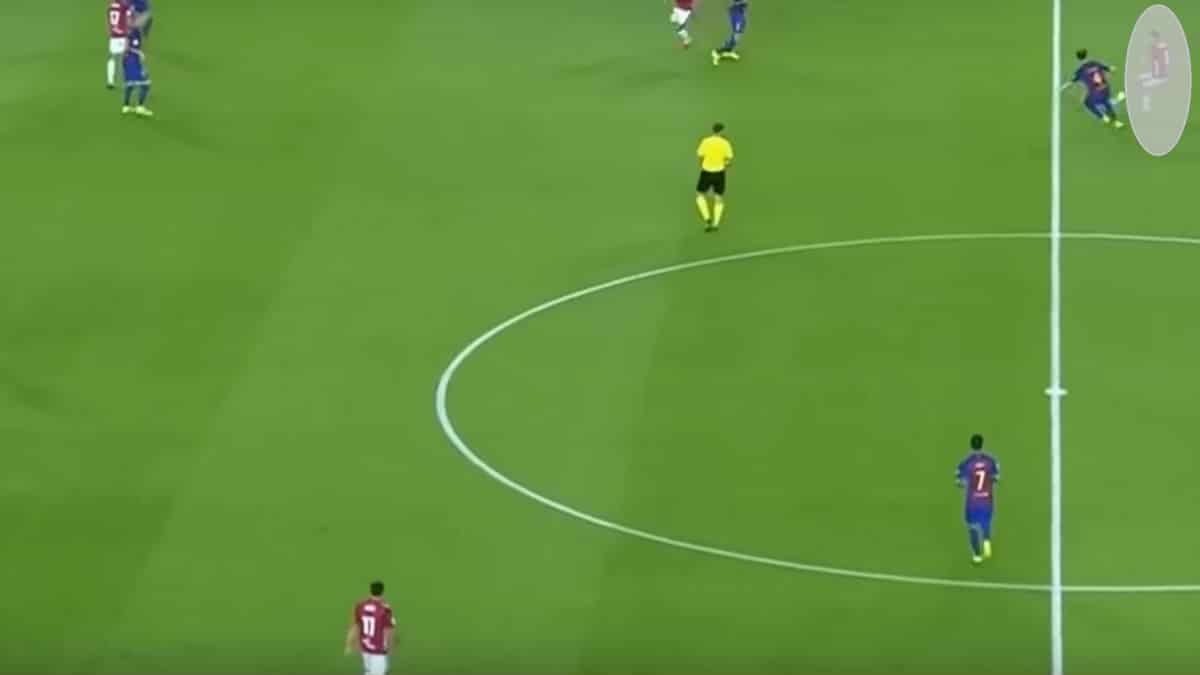 But he allows the ball to go through his legs, holds off his marker and creates space, showing both awareness and press resistance. 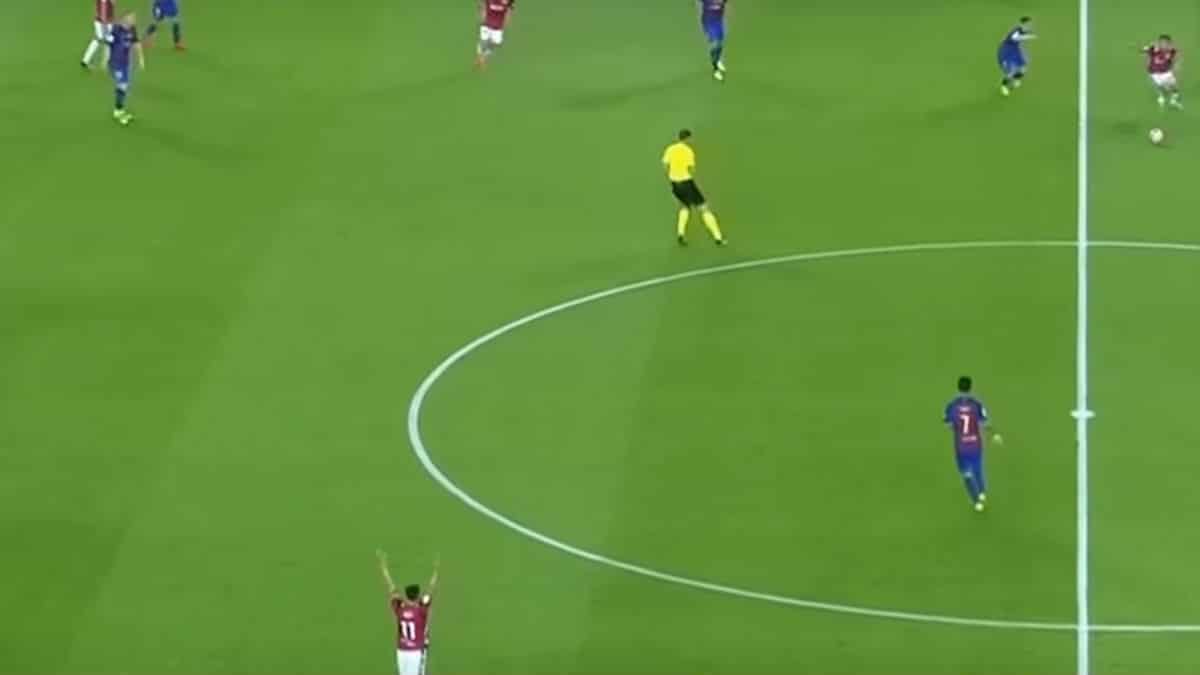 With Real Madrid’s emerging home-grown core, Llorente will undoubtedly be afforded the opportunity to show all of the above traits with the club in 2017/18. However, it remains unclear if he will be a regular starter. And, if he is, how will Zidane line his team up?

Casemiro is unlikely to relinquish the defensive midfield role, but perhaps the 22-year-old could form a double pivot with the Brazilian. However, this would require a switch to more of a 4-2-3-1 formation, and would also necessitate the dropping of either Modrić or Kroos.

The more realistic scenario is that Llorente acts as a stand-in to Casemiro, stepping in as replacement or partner depending on the game or situation. But, with his range of passing, control of the ball, tactical intelligence and understated defensive nous, he won’t be in the shadows for long.