Arsenal have finally done it. After weeks of speculation, the Gunners have bolstered their defensive ranks with the signing of Flamengo centre-back Pablo Marí.

His arrival brings to an end the Gunners' lengthy for a centre-back which has seen them strongly linked with Mykola Matviyenko.

The 26-year-old initially moves to the Emirates on loan until the end of the season with Arsenal paying £4million to acquire the Spaniard until the end of the campaign. If he impresses enough to justify becoming a Gunner on a full-time basis, the Premier League side have to part with a further £8million.

Given the extortionate fees being paid by other teams to land centre-backs, £12million could be a genuine bargain if Marí lives up to his potential.

Prior to this season, the left-footed defender was a bit of an unknown. He initially made his name for Gimnàstic before moving to Manchester City in 2016. Marí never made an appearance for the Citizens during his three-year stint with the club but he did have successful loan spells with Girona, NAC Breda and Deportivo La Coruña. He impressed enough to catch Flamengo's eye and moved for around the £1million mark last July.

Marí immediately struck up an understanding alongside Rodrigo Caio at the heart of the defence as Fla went on to conquer the Brazilian league and win the Copa Libertadores. The 26-year-old also impressed in the Club World Cup as the Brazilian club made it all the way to the final before losing 1-0 to Liverpool in extra time.

However, it was his performance against the Reds that really caught the eye. He, along with his team-mates, nullified Mohamed Salah and limited Trent Alexander-Arnold's influence.

If he's able to play like that every single week, Arsenal have a gem on their hands.

Edu, Arsenal's technical director, praised his latest capture, saying: “Pablo is an experienced player who will provide us with additional defensive quality. We have been monitoring Pablo’s career for a while and we are very pleased to have reached agreement with Flamengo for him to join us initially until the end of our season.

“Together with Mikel and his coaching team, we are all looking forward to seeing Pablo in an Arsenal shirt.”

And Marí spoke with the Arsenal website shortly after the deal was confirmed.

“When I spoke to my agent, it was a big thing that Arsenal were interested in me,” he said. “This is one of the best clubs in the world, so I’m absolutely delighted to be joining. I’m really looking forward to playing in this jersey and helping my team.”

“Right now I want to focus on the day-to-day side of things. I think we need to put the plans to one side for now because the most important thing is to take things one day at a time and focus on achieving short-term goals.

“We need to change the dynamic around the team, so the short-term objectives are the most important thing. As I’ve said, we have Mikel’s ideas, aligned with the club, and we need to perform very well to change things.” 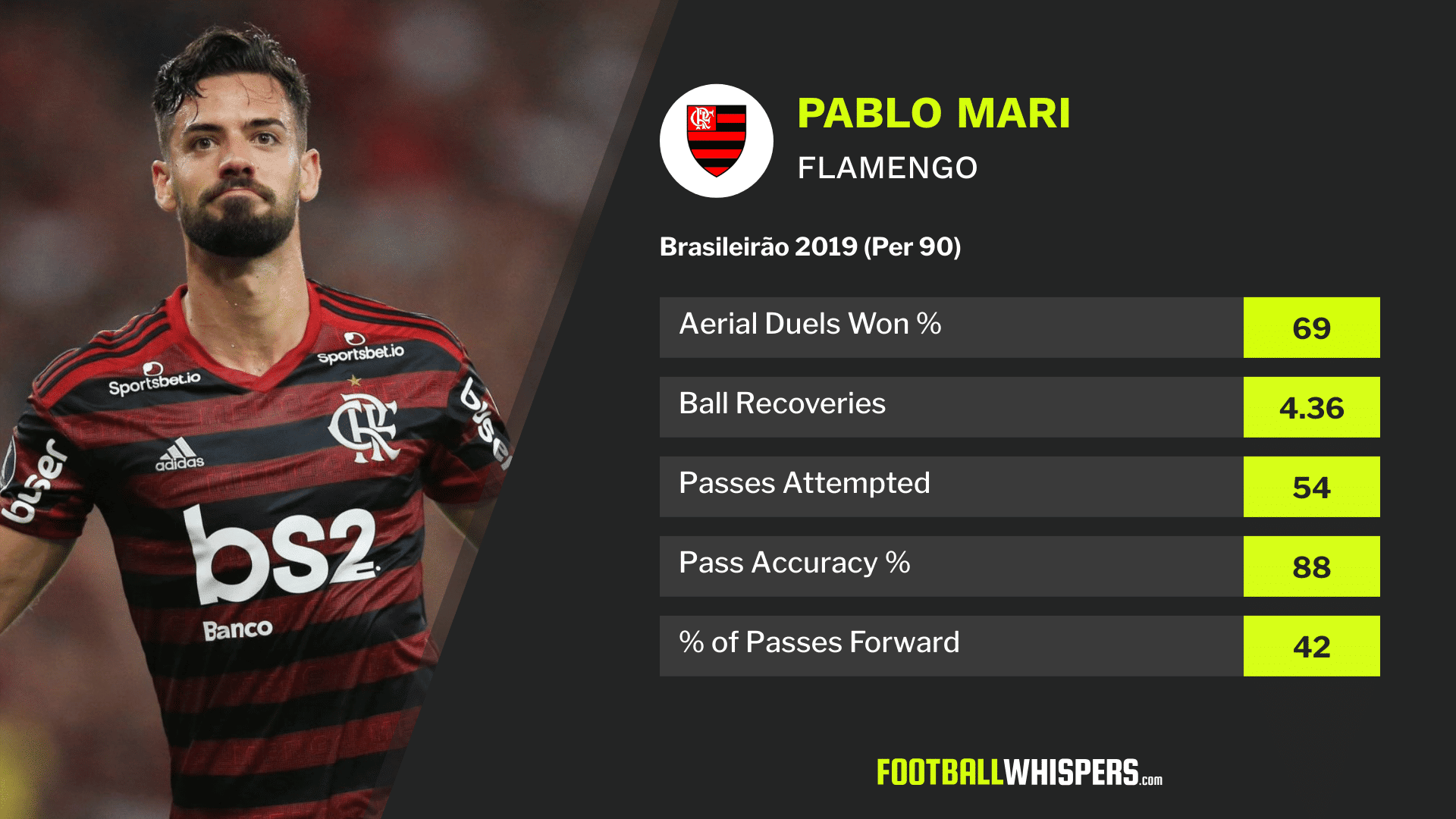 The Gunners have identified a player who clearly fits in with the way Arteta wants his team to play. Marí's use of the ball is exceptional and he is heavily involved in play.

On average he attempts 54 passes per 90 and 88 per cent find a team-mate. It is even more remarkable when you consider he's playing more than 40 per cent of his passes forward.

He's progressive, almost risky times, yet remains frugal when in possession. It's the ideal combination for this Arsenal backline.

Marí is dominant in the air, too, winning 69 per cent of his aerial duels. For context, Virgil van Dijk wins 75 per cent of his and he's lauded as a defensive juggernaut. So Arsenal's latest addition keeps good company in this particular metric.

The only real negative about Marí is a trait some might consider a positive. He is aggressive. He's proactive and regularly looks to squeeze the opposition. In Brazil, it helped Flamengo dominate. But England is different. Teams in the Premier League are used to being pressed. 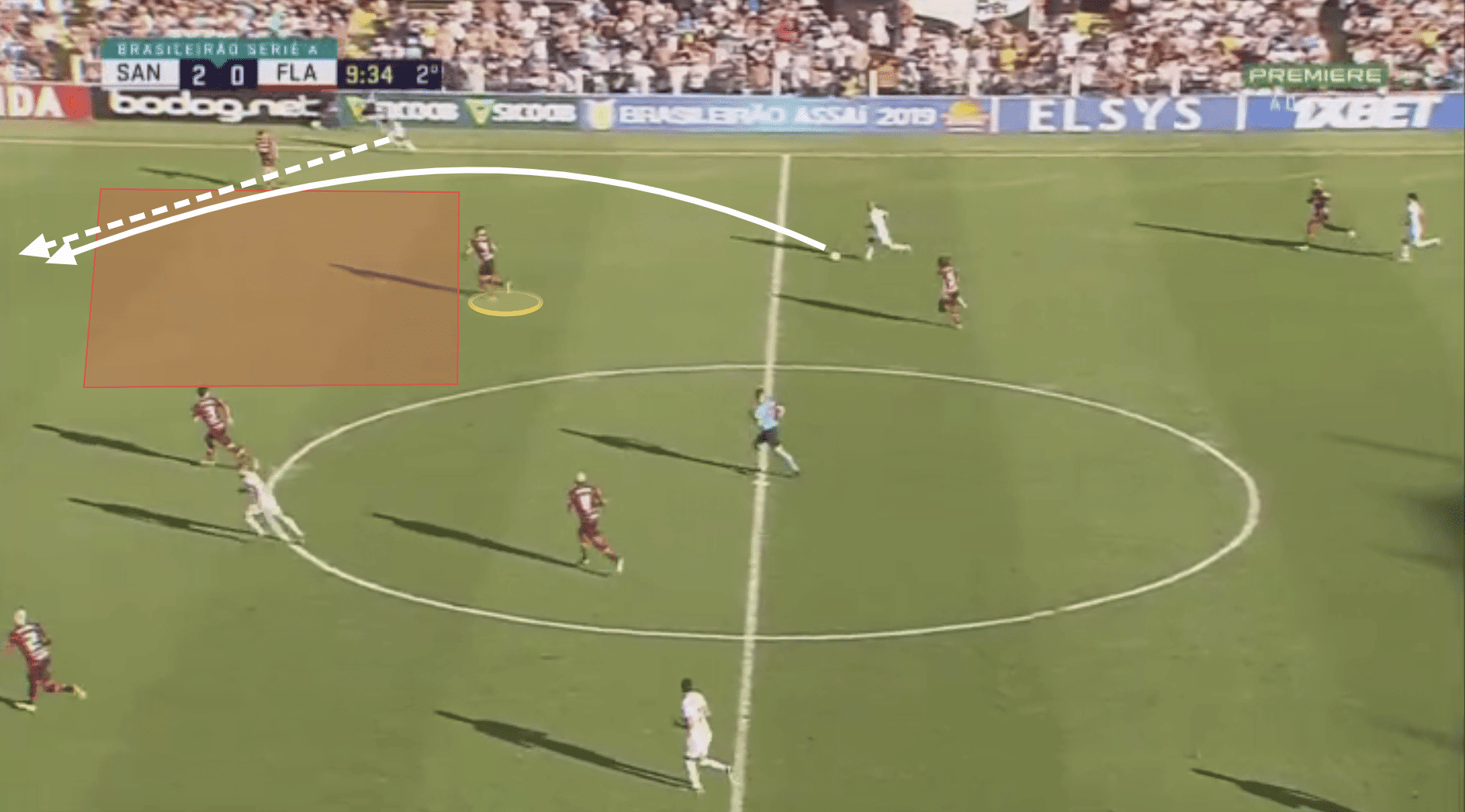 In the still above, Marí has stepped forward to front up the man in possession but in doing so he's created a huge gap in the defensive line that could be exploited. All it takes is an intelligent run from the man on the right and a well-timed pass and Santos are in. Fortunately for the visitors, Marí intercepts the pass. In the Premier League, this sort of thing could be punished.

If Arteta is able to manage Marí's aggression, he could be a shrewd signing for the Gunners. A reliable defender who can pick a pass. Those currently at the Emirates seem to only be able to do the latter.

This deal won't dominate the headlines but it could be what really kickstarts the Arteta era.