As far as transfer windows go, Arsenal had one of the best last summer.

Despite operating on what was supposedly a limited budget, the Gunners managed to land Kieran Tierney, Nicolas Pépé, David Luiz, Dani Ceballos and William Saliba. Though the latter only joins at the end of the season and Ceballos is only on loan from Real Madrid, it is still an impressive haul.

Tierney had been linked with a Premier League move for what felt like an eternity while Pépé was courted by Europe’s elite. Luiz arrived to add experience in the defensive third and Ceballos was the man to supply the ammunition to Alexandre Lacazette and Pierre-Emerick Aubameyang.

On paper, Unai Emery had a decent squad. But balancing that wasn’t going to be easy, as the former Paris Saint-Germain boss quickly found out. And after a disappointing start to the campaign, the Spanish tactician was relieved of his duties at the end of November.

Under the Spaniard, Arsenal were never able to take charge of games and the strikeforce had to feed off scraps. Emery’s reluctance to play Mesut Özil limited the team’s creativity and was partly why the Gunners had a negative goal difference when the one-time Sevilla manager was sacked.

Interim boss Freddie Ljungberg brought Özil back into the starting XI for the trip to Norwich, along with Joe Willock and Granit Xhaka. It didn’t work, not properly, with Arsenal having to settle for a 2-2 draw. But it highlighted the fact the former Arsenal midfielder realised the middle third was an area the team needed to improve.

Xhaka’s experience, Özil’s guile and Willock’s energy were by no means the perfect blend but it gave an insight into what Ljungberg was thinking and how his Arsenal side, if he is a long-term appointment, could well look.

With this in mind, we’ve taken a look at potential midfielder the Gunners could sign this January.

With Xhaka’s future still uncertain, Lucas Torreira reportedly eyeing a return to Italy, and Ceballos not setting the Emirates alight as hoped, there could well be space to add some middle third reinforcements this winter.

Who should Arsenal target?

The search criteria was fairly straightforward. Arsenal need a midfielder who is comfortable on the ball, both when looking to pick passes and when carrying the ball past opponents, but also someone that doesn’t mind doing the gritty side of things.

There are plenty of potential options out there. Some favour ball progression while others prefer the role of destroyer in the middle third. But few manage to do both as well as Piotr Zieliński. There are others, of course, but you’d have to assume that they fall outside of Arsenal’s budget.

Usually, signing a Napoli player mid-way through the season wouldn’t be an option. Aurelio De Laurentiis is notoriously difficult to negotiate with and always wants to eke out as much as he can from buying clubs. But right now, the Serie A side are in a bit of a mess.

Players have revolted against the chairman and reports in Italy suggest pretty much every first-team squad member is up for sale. 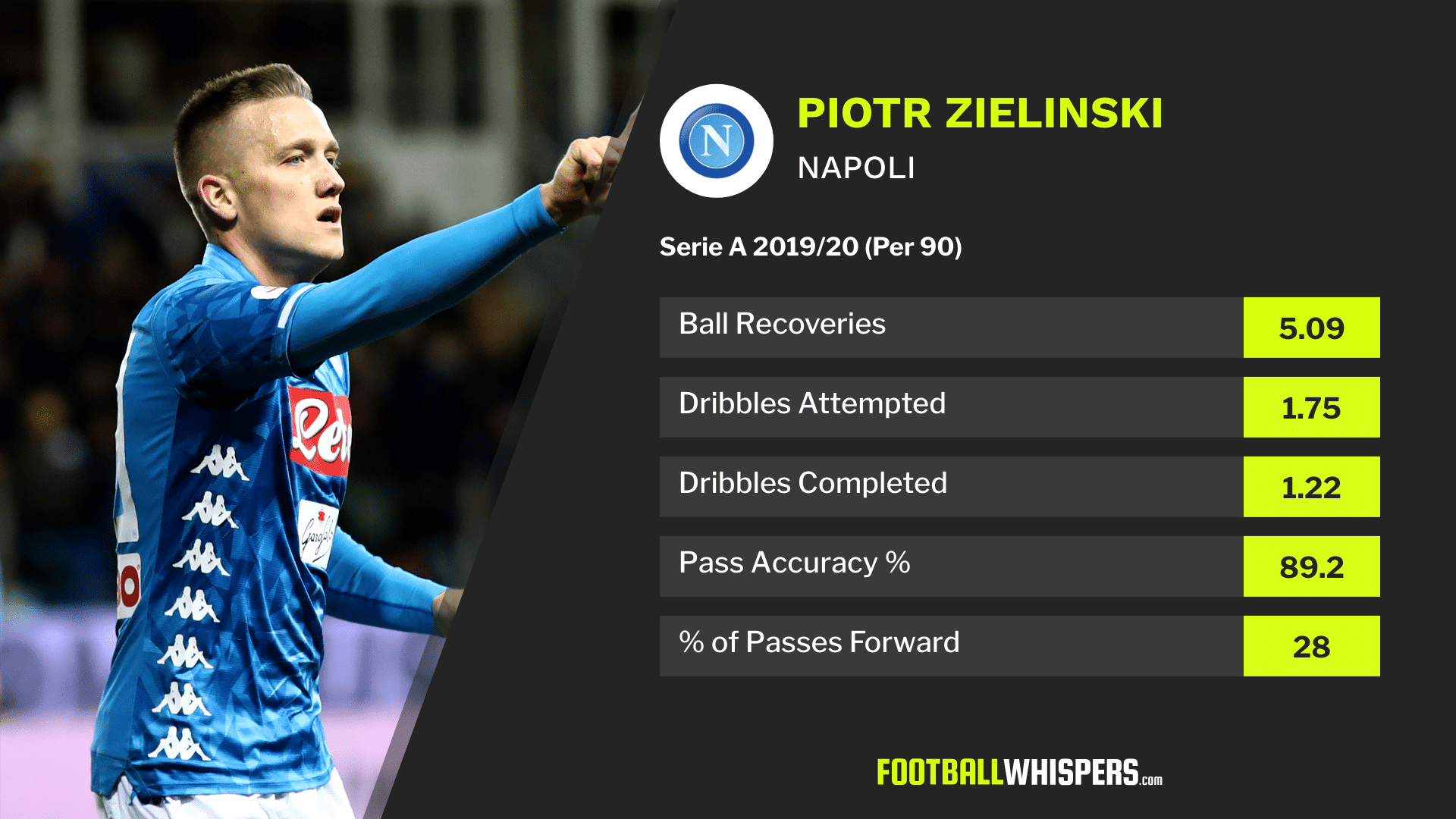 Arsenal could make the most of this opportunity to land themselves a multifaceted, versatile midfielder. The one-time Liverpool transfer target has a lot to his game and his playing profile suggests he'd be a good fit in the Premier League.

The 25-year-old is a stereotypical modern-day middle-third player. He may start in central midfield but can move into attacking positions and into wide areas.

More importantly, he's more than comfortable in these parts of the pitch. He doesn't just do a job, he excels. In some ways, he's a bit like Gini Wijnaldum. Zieliński plays that hybrid role really well.

As the graphic above highlights, he's busy on the pitch and makes over five ball recoveries per 90 in a largely dominant Napoli side. He's also efficient when it comes to his dribbles, completing near 70 per cent of them.

The Poland international takes risks on the ball, evidenced by the fact he attempts to play 28 per cent of his passes forward. While he's progressive, he's also fairly safe, finding a team-mate with a pass 89 per cent of the time.

He's frugal yet creative. An impressive combination and one that most midfield units would welcome. He brings everything Özil (creativity), Willock (high energy) and Xhaka (experience) add to the team but only takes up one starting berth.

On an individual basis, Zieliński may not be as good as Özil. But the former Udinese man has far more strings to his bow. And multi-functional midfielders are the way forward.

If the Gunners are in the market for one in January, Zieliński should be the one topping their wishlist.