Versatility is a useful trait within football. The ability to play in multiple different positions not only gives players greater chance of earning game time, but makes them harder for opponents to predict. However, it can also lead to unhelpful confusion over a player’s best position.

At 23 years of age, Alex Oxlade-Chamberlain has been a promising young talent for several seasons, but his versatility has arguably held him back. No-one, not even the player himself, is entirely sure where he fits in. With an abundance of qualities, he has a big future ahead for both Arsenal and England. But, before he begins to fulfil his immense potential, a decision needs to be made on where he should play.

The term ‘full-back’ has changed completely over the course of football’s history. While the original full-backs acted as the last line of defence, their modern equivalents are among the most important attacking components in the game. As a result, today’s full-backs require a number of offensive capabilities.

Oxlade-Chamberlain has spent almost all of his career playing in midfield, though in last November’s 1-1 draw with Manchester United at Old Trafford, he came off the substitute’s bench to feature at right-back for the final seven minutes of the match. In that short time, he supplied the cross for Olivier Giroud’s headed equaliser to help secure a point and spark further debate over where he should play. 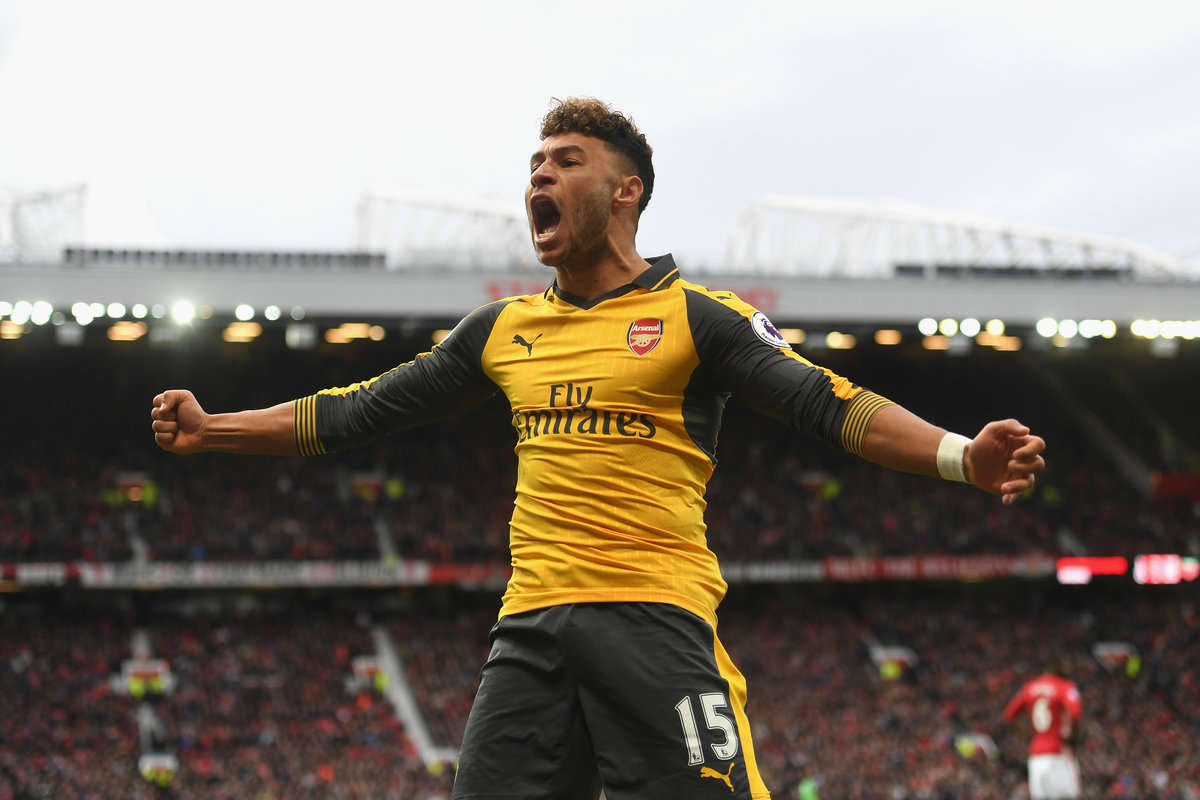 Jamie Carragher was quick to voice his support for the notion of Oxlade-Chamberlain continuing to operate at right-back.

“[He] has gone to a full-back position, and I think even going forward, that could be a position he could look for,” he told Sky Sports.

“You think of how well [Antonio] Valencia’s done for Manchester United, similar type of player, powerful player, he’s got the energy to get up and down.”

But, while Oxlade-Chamberlain possesses the athleticism and technical ability to provide good overlapping or underlapping runs, crosses and combination play down the right flank, the right-back position also asks questions of his defensive positioning that as yet have not been answered. And, with Héctor Bellerín Arsenal’s clear first choice in this berth, the 23-year-old would be better off competing for a position higher up the pitch.

Arsenal have had a number of issues with their central midfield in recent weeks, with Santi Cazorla and Aaron Ramsey injured and Granit Xhaka suspended for several games. Subsequently, Oxlade-Chamberlain has been asked to fill in alongside Francis Coquelin, and he has grabbed the opportunity with both hands.

Arsene Wenger believes the player’s fine performances in a more central role offer a strong indication as to where his future may lie. “I think he’s a good flank player and a good central player,” the Arsenal manager said. “But the future, personally, I would say is more central than on the flank for him.”

With Cazorla turning 33 this year, the Gunners will soon need a younger central midfielder capable of replacing him in the double pivot of their 4-2-3-1 system, providing precise passing and the ability to drive forward with the ball at feet. Stylistically, Oxlade-Chamberlain is the closest thing to Cazorla, who incidentally also spent much of his earlier career on the wing.

Oxlade-Chamberlain has admitted that he likes operating in a deeper role.

“Given the opportunity, I do enjoy playing in central midfield,” he told the Evening Standard last year. And, considering his recent displays, the overarching circumstances, and his combination of energy, control and passing, he could soon make this role his own. 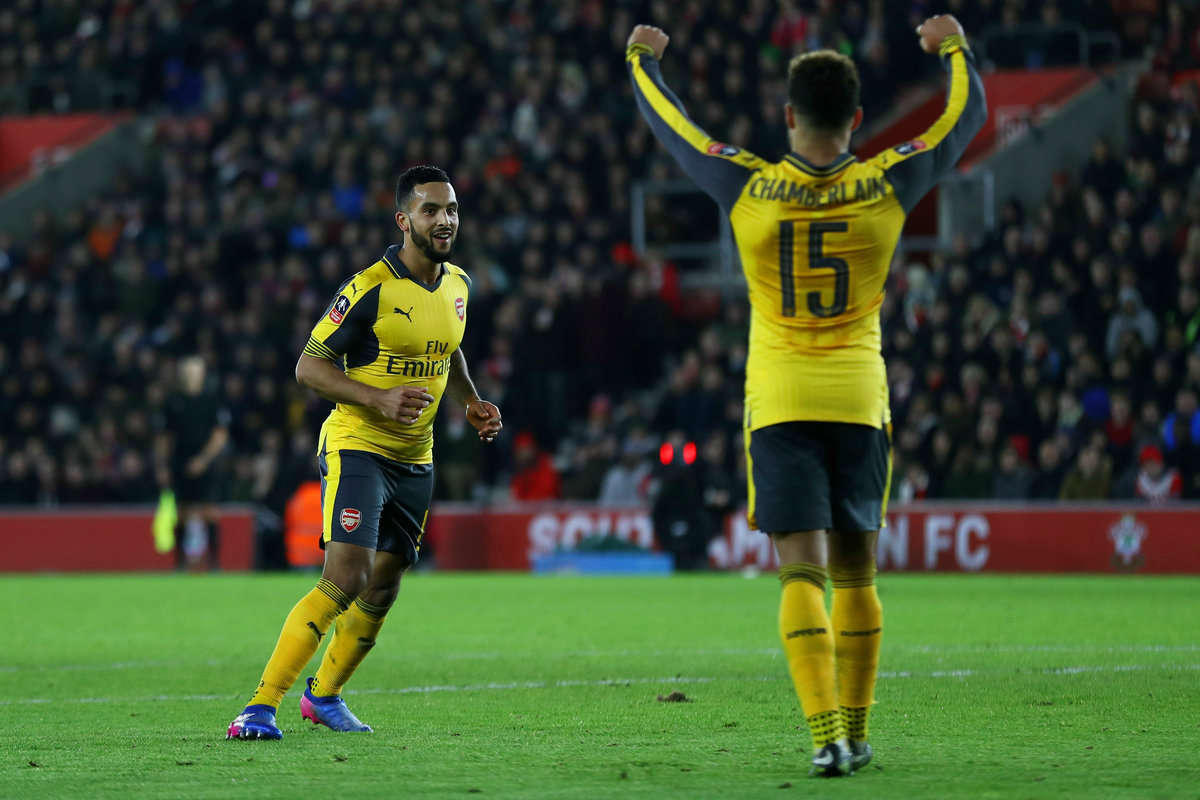 Within Arsenal’s squad, only Alexis Sanchez has completed more dribbles per game this season than Oxlade-Chamberlain’s 2.1. This statistic only serves to highlight the effectiveness of the young midfielder in one-on-one situations, something that has made a wide role a natural starting position for him. However, when also taking into account his work ethic and passing, it makes sense to consider him for a free role behind the striker.

At present, Mesut Özil takes up this position in Arsenal’s team, though – amid uncertainty over his future with the club – the German’s form has been mixed this term, with some fans calling for him to be dropped. Were he moved to the bench or sold, Oxlade-Chamberlain could be worth trialling as his replacement.

Composed on the ball, fast and highly skilled, the former Southampton academy graduate would pose innumerable problems to opposition defences in this area. However, he may not be fully comfortable in this less involved role, which requires more subtlety than force.

The right wing is where Oxlade-Chamberlain burst onto the scene as an exciting teenager in League One with Southampton, and it is where he has spent most of his career playing. With his relentless running, pace and crossing, he is a natural fit for the berth, however there is now a risk that utilising him on the right flank fails to maximise his abilities.

In isolation he has the dribbling skill and speed to beat his marker, offering real width and penetration in the same way that Raheem Sterling does for Manchester City. However, he is not as comfortable cutting in onto his left foot, and he also has a tendency to look for the ball that reduces his effectiveness as a winger.

Oxlade-Chamberlain has spoken out about his difficulty adjusting to a role that requires him to actively distance himself from the ball’s location, stating that: “Because I’ve been playing on the wing, I’ve focused more on my runs off the ball in behind. That’s because I’m more naturally like a midfielder so I come towards the ball to receive it.”

With his inclination to go in search of the ball, preference for coming inside onto his favoured right foot and desire to run at and beat opponents, the left wing berth is more of a fit for Oxlade-Chamberlain than the right.

WHAT IS OXLADE-CHAMBERLAIN’S BEST POSITION?

With his desire to be involved, ability to retain possession under pressure, dribbling, passing and energy, Oxlade-Chamberlain has all the raw ingredients necessary to grow into an attack-minded central midfielder. It may be a risk for Arsenal to use him in a two-man midfield for the time being but, over time and with possible tactical changes on the horizon in future, he could thrive within a three-man midfield.

IS ALEX OXLADE-CHAMBERLAIN THE PERFECT FSG AND LFC SIGNING?