It’s fair to say the pressure was building on the Croatian after a nightmare start to the season had seen them lose their three opening games and sit bottom of the table.

The sacking of Frank de Boer by Crystal Palace after just four games showed no Premier League manager is safe, so he must have felt that his job was under threat.

Bilić was one of the favourites to be the winner of the sack race as the new season began, but now that unwanted prize has gone to de Boer attention will again turn to himself and Eddie Howe, whose Bournemouth side remain winless.

“Was de Boer’s sacking on my mind? It was. I ain’t going to lie,” admitted Bilic after the game.

“But I’m 49, I’ve been in football since I was 18, so I know. To be fair, I came into the zone where I didn’t care about that [being sacked] — not in a negative way. I care about the team, but I saw them really focused.”

Of course that’s only a start and while a manager shouldn’t be sacked after four games, one result shouldn’t really save a job.

But Bilić was boosted by the return of several big presences in the side, which will help him going forward.

Cheikhou Kouyaté’s return to the side against Huddersfield was much needed, while José Fonte, Winston Reid and Andy Carroll were all back in the starting lineup.

Pedro Obiang also missed the end of last season through injury, so his return is also helping Bilić with the team he would like to put out.

All of them are big players physically, and that will help the Hammers going forward, especially in this weekend’s clash with West Bromwich Albion.

Tony Pulis’ side will provide a similarly robust challenge to Huddersfield, who hadn’t conceded a goal before Monday night.

If Bilić can come through that game unscathed – without dropping points or players – you will feel he will be a lot more confident about having turned around the Hammers’ poor early season form.

West Brom will provide a similarly robust challenge, but if Bilić can come through that game unscathed — that is, without dropping points or players — then he can look to the two home games against Tottenham Hotspur and Swansea City to start showing that his side have turned around their early season.

The use of a back three helped them keep their first clean sheet of the season, but despite that, they are still the team with the worst defence in the league after conceding a total of ten goals in their first three games – all of which were away from home.

But the new-look back three of James Collins, Fonte, and Reid should help them shut up shop much more effectively.

Kouyaté and Obiang will be tasked with putting out fires in midfield, while Pablo Zabaleta should provide experienced support in defence from his role as a right wing-back.

They also have Manuel Lanzini to come back into the side, and his presence in a creative attacking role may mean that next time they take the lead in a match it will be down to their own good attacking play, rather than a lucky deflection as it was against Huddersfield.

The change in shape, the return of several key players, and a return to a home ground which had been unavailable for the early part of the season gave Bilić the opportunity to turn around his side’s poor start.

He’ll hope that it wasn’t just playing at home that helped them beat Huddersfield, but with the tactical switch, the Hammers will be able to win at West Brom, who had started the season unbeaten until last week.

Football is a confidence game, which Bilić knows, and after his side winning and his opponents losing last time out, he’ll hope to take advantage of that.

“It’s like a chain and you have many things that are more positive,” he said in his pre-match press conference.

“We must continue, and I can help do that, yes. By being there, by talking to them on the pitch, by having individual talks and a number of things. That’s the way to keep that feeling.”

It will be a physical battle at the Hawthorns, and Bilić will hope his side can come out on top – another defeat could see all the pressure return.

Use our predicted lineups feature at the top of the page to pick and share the side you would pick if you were Bilić on Saturday. 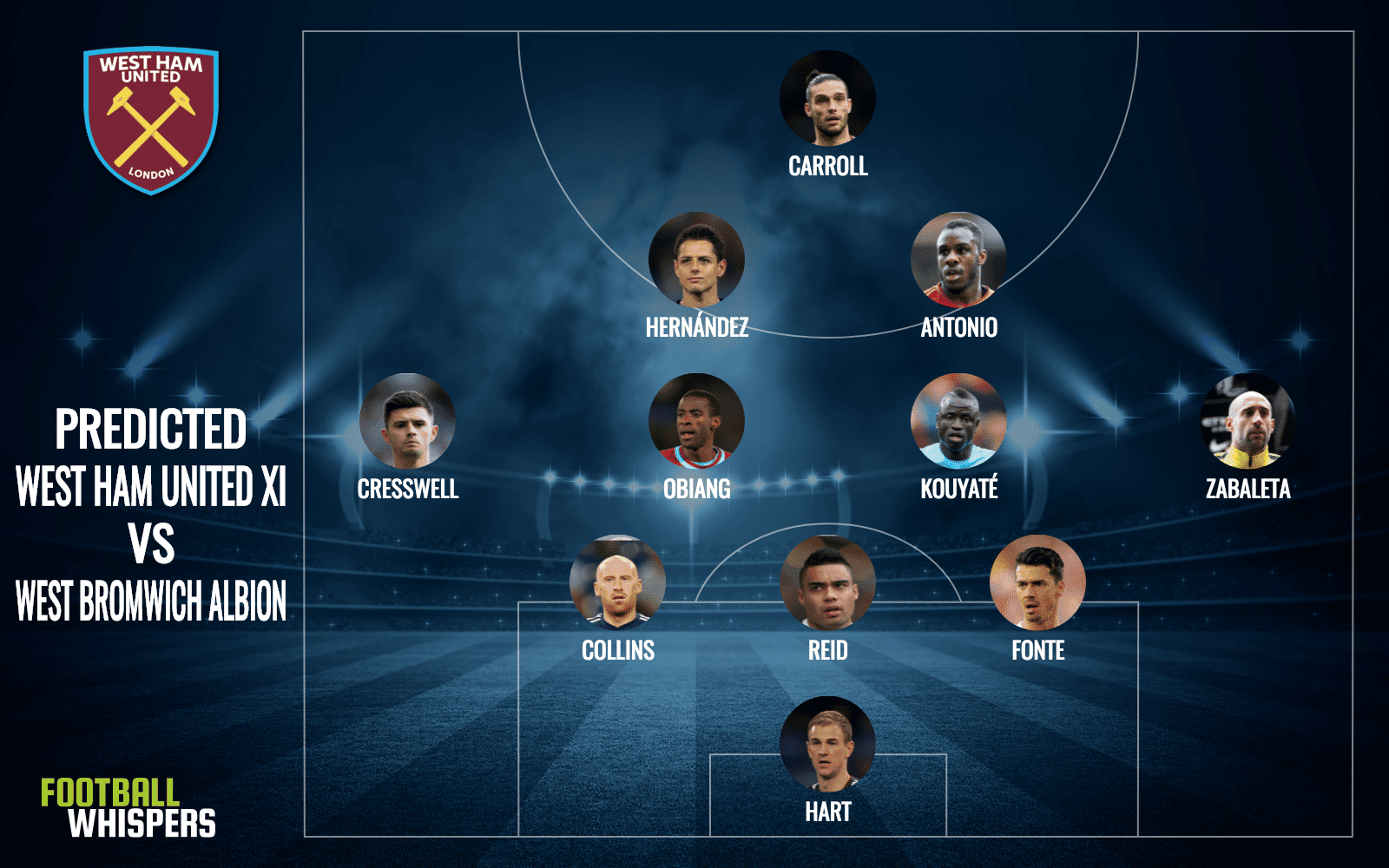 Our unique algorithm has predicted the starting XI it believes is most likely to start, but you can also give it a go yourself.

Just click ‘create your own’ and pick the XI players you would choose, and you can also see their stats per 90 minutes once you’ve picked them.

When you’re happy with your team, press confirm and you’ll be able to share it with your friends via social media.