West Ham United look to have turned things around in December, the 4-1 win over Swansea on Boxing Day was their third in a row, taking Slaven Bilic’s team up to 11th in the table.

Despite goals from Andy Carroll, Michail Antonio and André Ayew, many believe that the Hammers are still missing some fire power upfront. Summer signing and flop, Simone Zaza, as reported by The Mirror, looks set to join Spanish side Valencia on loan, ending his barren spell at the East London club.

Since joining from Juventus after the European Championships, the Italian striker has failed to score in 461 minutes of Premier League action after averaging two shots per game. French radio station RMC reported that West Ham had a €10 million offer for Toulouse striker Martin Braithwaite, but that’s not to say the deal is dead in the water.

Toulouse are a selling club, the likes of Moussa Sissoko, Serge Aurier and Wissam Ben Yedder have all left in recent years and president, Olivier Sadran, already has a gentleman’s agreement in place with the Danish striker that he can leave in the summer. Offer a decent amount, and there is a deal to be done. It may take another €10 million, but it’s worth it if the 25-year-old scores the goals that fires West Ham up the table.

Braithwaite joined Le Téfécé in 2013 and has slowly became a key part of the team. At first he was the foil to Wissam Ben Yedder, scoring 13 goals in two seasons, averaging two shots per game.

Then, when the little Frenchman was constantly linked with a move away, Braithwaite stepped up, scoring 11 goals in 33 starts last term. Ben Yedder left for Sevilla in the summer and the Dane was put in charge of the attack.

Just to put added pressure on himself, at the start of the new campaign, he told twitter that for every goal he scored, he would donate €1000 to charity. Toulouse and Braithwaite started quickly, scoring four goals in the opening four weeks. Then he grabbed a double and an assist as they shocked AS Monaco with a 3-1 home win.

The team from the Rose city have struggled since November and with Braithwaite in the team, they have only won twice in 10 league games since the Monaco victory and the international striker has only contributed a goal and two assists.

His numbers show his improvement and increased contribution. Averaging 2.9 shots per game, he is winning more aerial battles this season at 1.4 and is being dispossessed less.

What makes Braithwaite a danger this season is, due to his goal-scoring record, he is receiving more attention, but as he is unselfish and a willing passer, he is able to draw defenders out of position and pick out team-mates.

As you can see – or maybe not due to the fog – from the graphic below, against FC Lorient, Braithwaite (yellow) commits the defender and draws the attention of two more. He then slips the ball into strike-partner Ola Toivonen and the Swedish forward makes it 3-1. 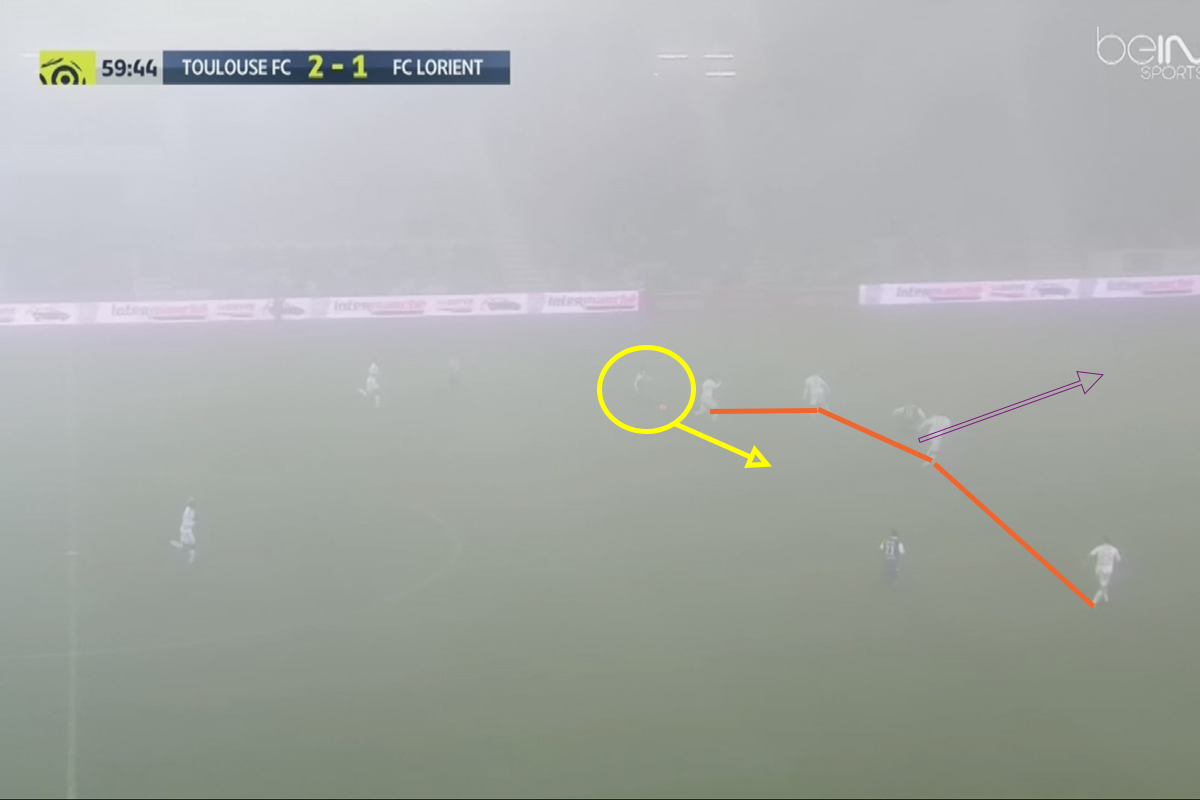 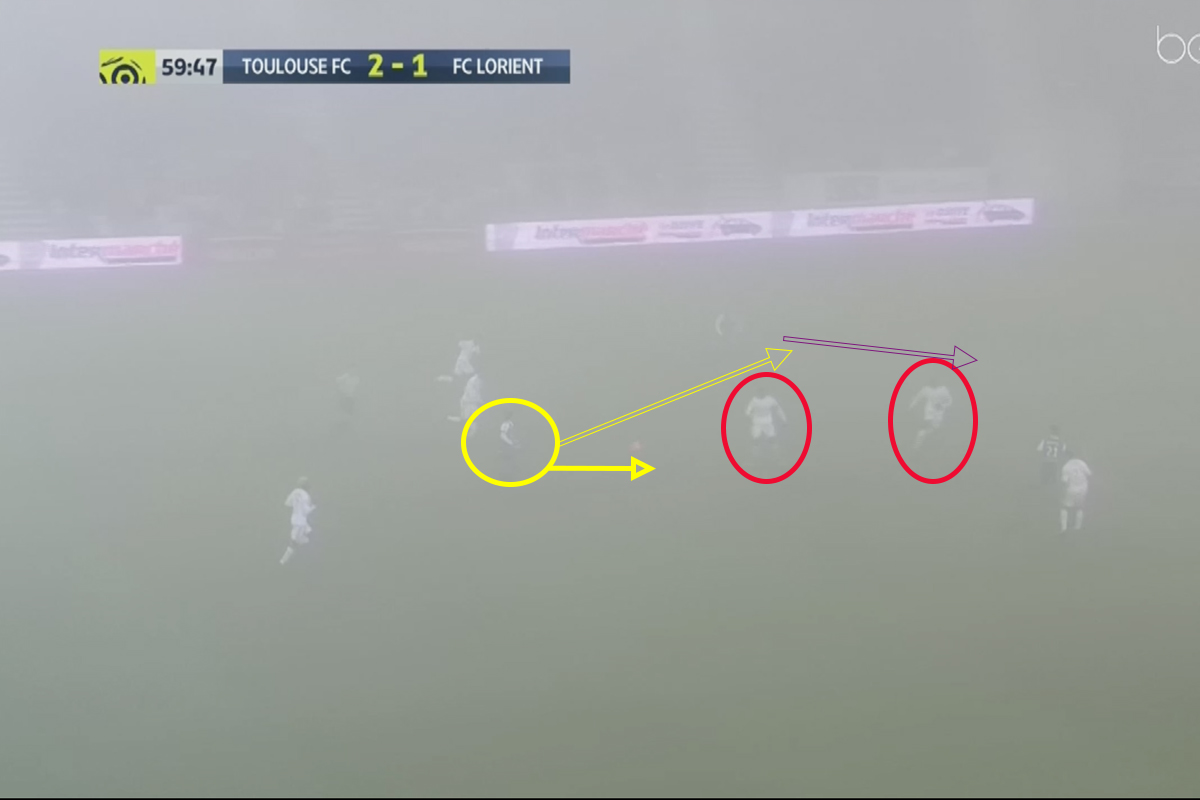 In the game against Monaco, his team were 1-0 down when the ball was lofted to the back post. Braithwaite was completely unmarked, but the ball didn’t have enough pace to get off a powerful header. Most strikers would have probably tried the shot regardless, but the Dane have the sense to play it back across the goal and left Oscar Trejo with an easier opportunity to level the scores.

Against AS Monaco as the 25-year-old would score twice to seal the win, Braithwaite showed his quality as a goal-poacher. You can see from the graphics below; his starting position sees him positioned between both centre-backs. 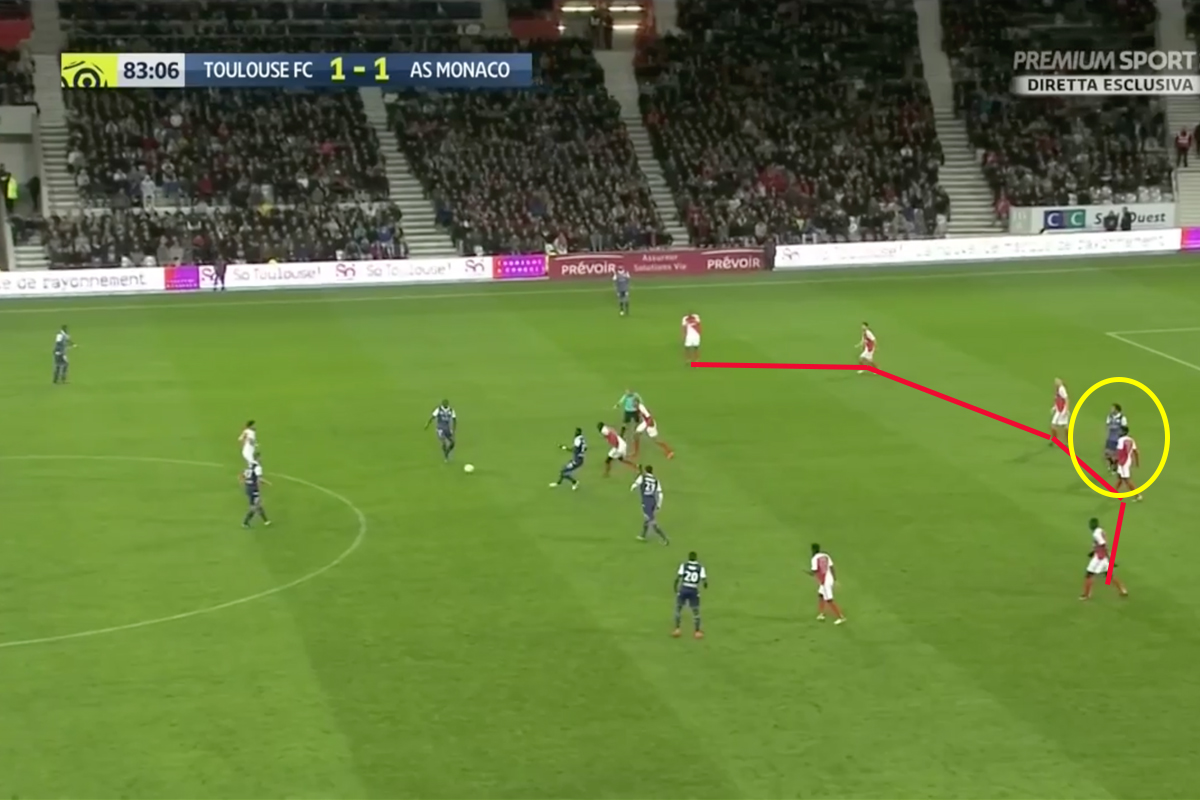 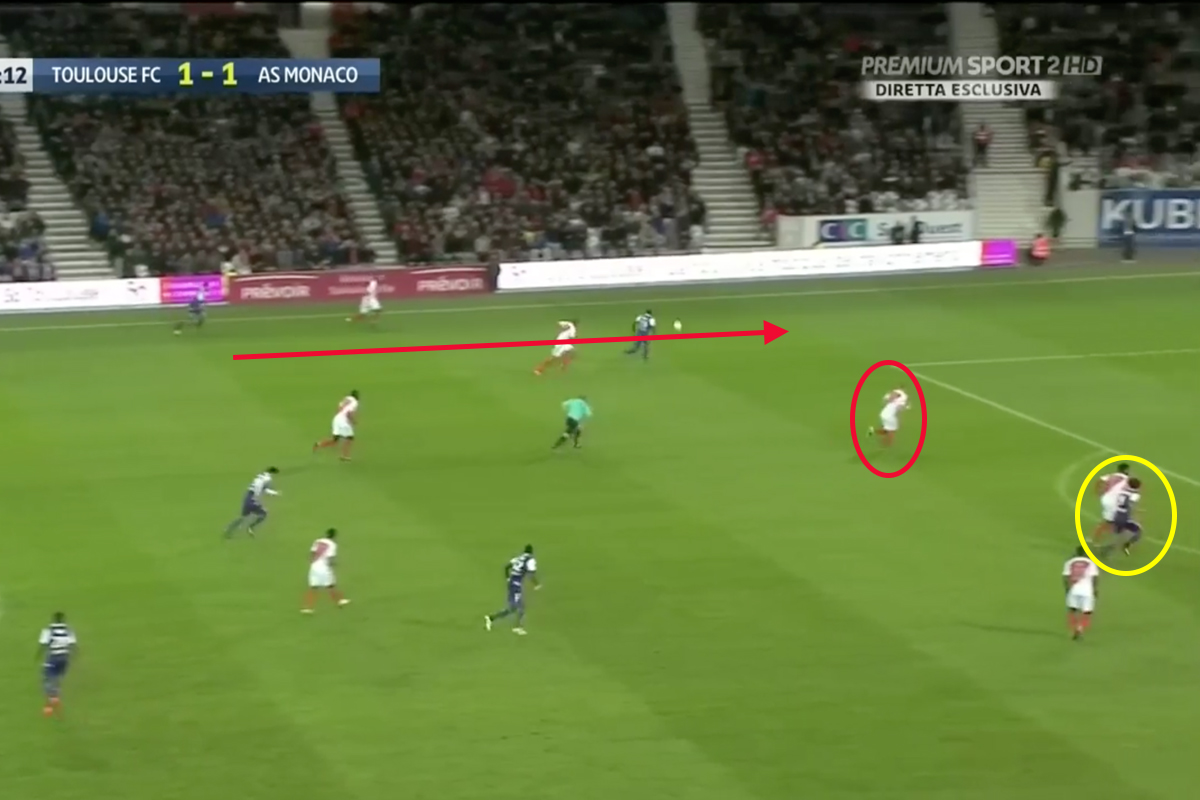 The ball is pushed down the left flank to Somalia and with Andrea Raggi (red) pushing out wide to cover the run, Braithwaite (yellow) is left one-on-one with Jemerson. He has peeled off to the back of the Brazilian, giving the centre-back the issue of trying to watch both the ball and the man. 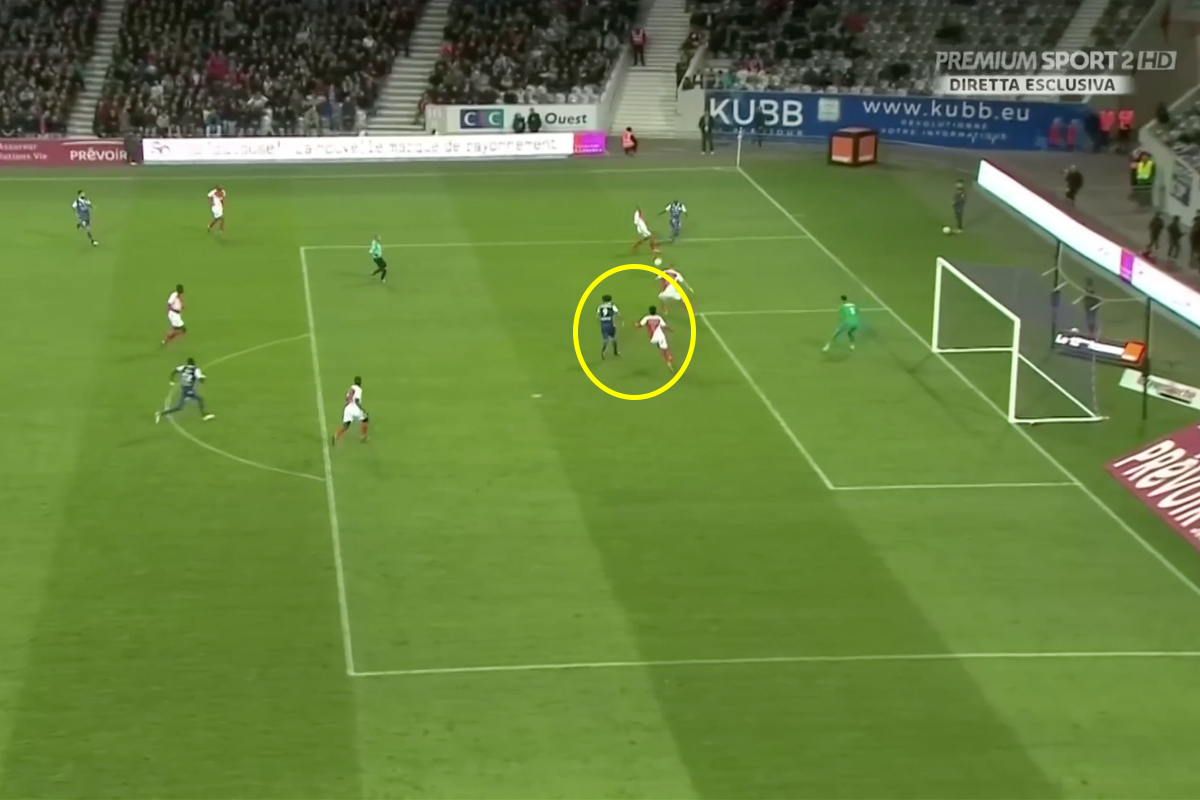 Braithwaite then powers past his marker, gets in front and the pass is played perfectly to his left-side, keeping the defender away and allowing the striker to place his finish low to Danijel Subasic’s left. It’s the perfect move from a striker on his game. Showing his intelligence and ability to finish with both feet.

The second was a neat finish on his right, playing off the last shoulder, he capitalised on another mistake from Jemerson. Monaco are averaging just one goal against per game this season, so it’s testament to Braithwaite and what he brings to the TFC attack that they managed to score three in one game.

Is he the man to help West Ham?

Deadly from the penalty spot, able to score free-kicks and a mobile, quick striker. He is everything West Ham were looking for when they scouted Sassuolo’s Grégoire Defrel recently – more in this article – what has turned Braithwaite into a worthwhile target this season is his finishing.

Previously, when he joined the league, he missed too many chances, but that has improved and he looks much more confident and clinical in the final third. Added to the physicality traits that should make his powerful enough for a move to the Premier League and Braithwaite ticks all the Hammers boxes.

In the summer, when West Ham were last linked, Braithwaite signed a new deal for the Ligue 1 club that will last until 2019 and took his reported wage up to around £15,000 a week. Andy Carroll earns £22,000 a week and Sunderland target Diafra Sakho on slightly less with £17,600, so it would be no surprise to see Braithwaite join those strikers after picking up a wage increase.

That would make a deal possible and affordable, especially if they want to up their bid from the €10 million that has already been rejected. Braithwaite can play as the long striker when playing Carroll as the lone frontman is not an option, but his mobility and pace could see him play behind the Englishman and beside Dimitri Payet.

He is flexible, talented and smart enough to adapt to Bilic’s tactics and a much better fit than Zaza. If they can come to a deal that suits both clubs, it's a transfer that could give West Ham much-needed fire-power.