As Manchester United fans will testify, David Moyes is a manager who loves a cross. And West Ham United’s latest transfer target would imply the Scot is staying on in East London beyond this summer.

Standing at 6ft 3ins, Hertha Berlin’s Davie Selke is the wayward wonderkid come good and the Hammers appear in a two-way tussle with Premier League Brighton to try to take the former Germany Under-21 international from one Olympic stadium to the other.

Legendary German striker Klaus Fischer has even likened the 23-year-old to national team record goalscorer Miroslav Klose. Selke himself cites Mario Gómez as his inspiration. Two targetmen Moyes undoubtedly would have loved to work with in their pomp.

Selke has scored eight goals in 24 Bundesliga games – one every 203 minutes – and has impressed with his improving aerial prowess, ability to hold the ball up and technique, with discussions throughout this campaign about whether he can grow into that No9 role Joachim Low has so craved at international level.

But Russia 2018 will probably come too soon for Selke who has successfully rebuilt his career in Berlin after two largely lost seasons at RB Leipzig having controversially dropped down into Bundesliga II in 2015, to join Ralf Ragnick’s ambitious project.

The Hammers do appear relatively well-stocked in the strikers’ department with Andy Carroll, Marko Arnautović and Javier Hernández all offering something different, albeit rather sporadically. 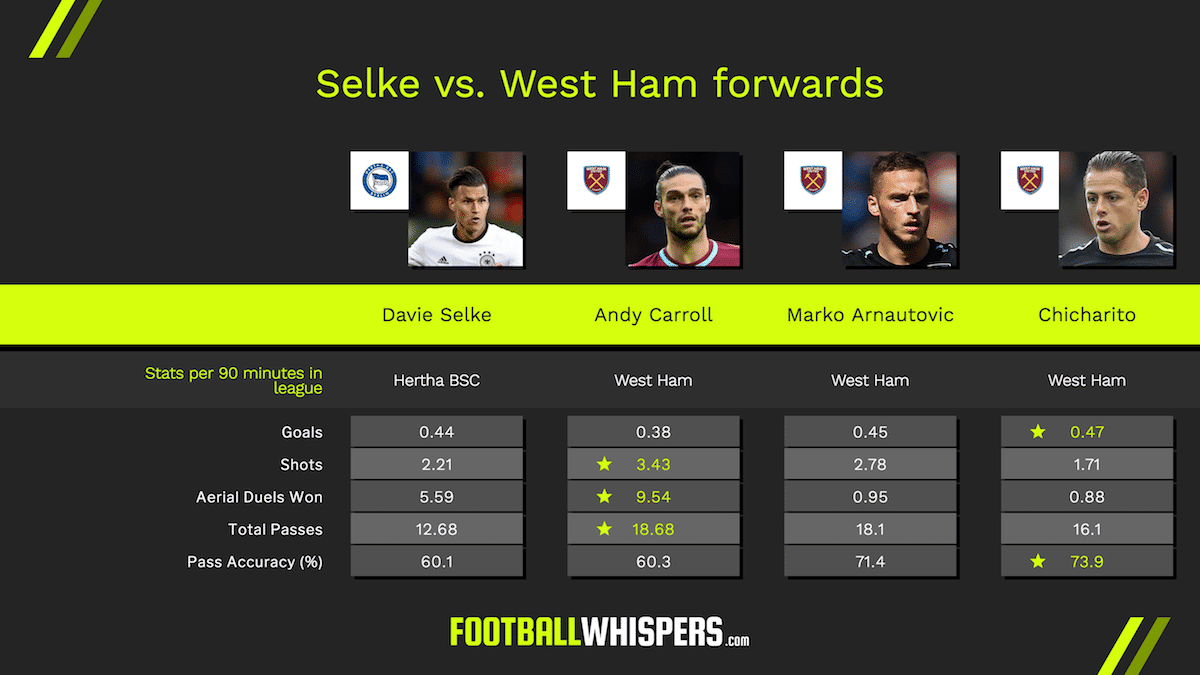 Carroll is the most straightforward comparison given the physical attributes they share. Selke has won 5.59 aerial duels per 90 minutes – fourth in the Bundesliga – versus Carroll’s lofty 9.54, but what continues to count against the 29-year-old is his durability.

But this will be the fifth-straight season where he fails to make more than 15 starts for the Hammers and given his advancing years and knees, it’s not a statistic that’s likely to improve. Selke, on the other hand, is in his fourth full professional season, although has had his own injury problems.

Unsurprisingly, Selke’s aerial numbers comfortably out-muscle Arnautović (0.95) and Hernández (0.88), which given West Ham are sixth in long balls per game (70) and joint-third in crosses (20) is of importance.

His overall production can be assessed via expected goals contribution per 90 (xG + xA) and on that front his 0.44 is not far behind Arnautović (0.59) and Hernández (0.5) while is greater than Carroll (0.39). Should he get more involved in the overall play that number could swell.

There is room for improvement but Selke certainly fits the Moyes mould at West Ham. What is clear, though, is there are signs he resembles a younger, fitter version of Carroll with signs that the Hammers may be ready to cut their losses on the Geordie.