West Ham and Leicester both secured wins in their opening games of the new Premier League season and we're expecting another action-packed 90-minutes between the pair on Monday night. West Ham are the slight favourites as things stand but this game really could go any way.

We're expecting goals at both ends of the pitch on Monday night as that has been the case in five of the last six meetings between West Ham and Leicester. |Both teams have also scored in two of each side's last four outings with West Ham only failing to score in one of their last six matches and Leicester only failing to find the back of the net in two of their last six fixtures.

At least three goals have been scored in each of the last five encounters between these two clubs and we're expecting plenty of goalmouth action on Monday night as well. Three of West Ham's last five matches have produced over 2.5 goals, including that excellent 4-2 win over Newcastle last weekend. Two of Leicester's last four outings have witnessed at least five goals being scored, so you can see why we're confident of at least three going in on Monday.

When you are expecting an action-packed 90-minutes with plenty of goalscoring opportunities then it's safe to bet that the game will include a decent amount of corners. West Ham's recent trip to Newcastle produced 13 corners while Leicester's game against Wolves saw a total of 9 corners, so you can see why we're backing over 10 corners to be won in Monday's clash.

Everything you need to know ahead of West Ham vs Leicester

West Ham have won their last two meetings with Leicester and following their 4-2 win at St James's Park last time out, they will be confident of making it three in a row against the Foxes this Monday. The Hammers responded really well to going behind twice against Newcastle and trailing at half-time. Moyes has his side playing very much like they did last season, so West Ham should be right up there battling for the European places once again. Arthur Masuaku is the only injury concern for the Hammers but the player is on his way back from a knee injury.

Jonny Evans, Ryan Bertrand, Justin James, Wesley Fofana and Nampalys Mendy have all been ruled out of the trip to London through injury, but James Maddison and Timothy Castagne could make their returns. Leicester weren't at their very best at home to Wolves on the opening weekend of the new season but they did enough to win the game thanks to a strike from Jamie Vardy. Monday night should be far more of a test for the Foxes and it will be interesting to see if they can up their game. 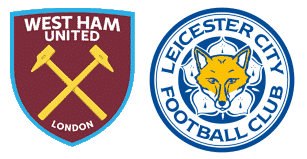