West Ham continue their push for the Champions League places this weekend as they entertain an out-of-form Everton. The Toffee's perform much better on the road than they do at Goodison Park but their overall performances on the pitch have been very poor of late.

Read on for our full match preview and prediction for West Ham vs Everton in the Premier League.

West Ham claimed a 1-0 win at Goodison Park in January and have outperformed Everton in all departments so far this season. The hosts sit 6pts clear of the Toffees and head into Sunday's clash as the form favourites with three wins from their last six outings. Everton have only won one of their last six games in all competitions and we're expecting them to struggle in London.

Jesse Lingard has been a revalation since he made the loan move to West Ham in January, scoring 9-goals in 12 Premier League apparances for the club. The England international has scored 4-goals in his last five matches for the Hammers and will be a big threat to Everton's defence this weekend.

Every stat you need to know about West Ham vs Everton

West Ham the favourites to add to Everton's woes

West Ham secured a great 2-1 win away at Burnley last time out and continue to push for a top-four finish this season. David Moyes' side continue to defy the odds this season but all their hard work looks likely to pay off in some kind of European football next season. The Hammers don't have the best of recent records against Everton but did beat the Toffees in their own backyard earlier in the season. Masuaku, Rice, Ogbonna and Noble could all miss out this weekend through injury, though the latter could pass a late fitness test.

Everton will be hoping to welcome back the injury-prone James Rodriguez on Sunday. The club have missed the Colombians creativity and Everton look much better going forward with him in the side. Doucoure and Gbamin will miss the game though and that leaves Everton's midfield a little light. The Toffees won their last away game against Arsenal despite putting in a poor performance but they couldn't get away with it at home to Aston Villa last time out, going down by two goals to one. Carlo Ancelotti must be looking forward to the summer transfer window as it will give him the chance to remove some of Everton's deadwood and replace them with younger, hungrier and most importantly, faster players. A lack of pace throughout the Everon midfield, as well as a lack of natural width, has been a constant issue this season. 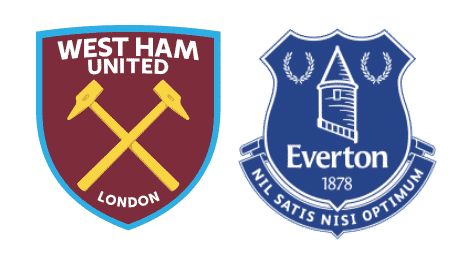