Two sides in decent form go head-to-head in the Premier League on Sunday, as West Ham play host to Arsenal. David Moyes' men sit 7pts and five positions ahead of Mikel Arteta's side and with the home advantage, the Scot will be confident he can get one over on his former player this weekend.

Arsenal have a great record against West Ham over the years as well as in recent seasons. The Gunners have only lost one of their last seven games against the Hammers and are unbeaten in their last four away games in league and cup. West Ham haven't lost any of their last three home games and have outperformed Arsenal so far this season, so we're predicting a draw on Sunday.

Jesse Lingard has rediscovered his form during his loan spell at West Ham and has already made himself undroppable to his new manager. Lingard has netted 4-goals in six Premier League starts for the Hammers and if he continues in their vein of form then he could even sneak into Southgate's England squad for the upcoming Euros. Lingard scored in his last outing for the Hammers, a 2-0 win over newly-promoted Leeds.

Four of the last six meetings between these two clubs have ended with both sides getting on the scoreboard, including their last encounter in September which produced a 2-1 win for Arsenal. Both teams have also scored in two of West Ham's last four outings and each of Arsenal's last five fixtures, so you can see just why we're not banking on either side keeping a clean sheet this weekend.

West Ham vs Arsenal: All the stats and odds for this Premier League clash

West Ham face a tough test at home to the Gunners

David Moyes is working wonders at West Ham, his second spell with the club, and could guide his team to European football. The Hammers might have lost 2-1 to Arsenal when the pair locked horns earlier in the campaign, but the hosts have won each of their last three home games and will provide stubborn opposition this weekend. The hosts already sit 7pts clear of Arsenal and will be keen to keep one of their rivals for the European places as far behind them as possible, but the visitors arrive as the form favourites.

Arsenal are unbeaten in their last five matches, picking up four wins and a draw in the process. A recent win in the North London derby will have given Arteta's side a much-needed boost in confidence, but West Ham could prove to be an even tougher opponent. The Gunners have a midweek Europa League 2nd leg to negotiate before they can turn their full attention to West Ham and this is something Moyes will be looking to exploit from the getgo this Sunday.

The hosts have injury concerns over Randolph, Ogbonna, Fornals, Fredericks, Masuaku and Yarmolenko ahead of this weekend's clash with Arsenal, while the Gunners will hand Bukayo Saka a late fitness test, one which the youngster is expected to pass.

FAQ about West Ham vs Arsenal 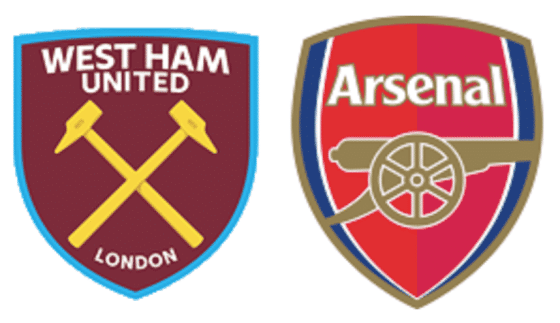