West Ham United fans thought their prayers had been answered when their club pulled off the £13million signing of Javier Hernández from Bayer Leverkusen last summer.

The Mexican poacher, previously of Manchester United and Real Madrid, looked the ideal man to bring high-quality, reliable finishing and almost-guaranteed goals to a Hammers side bereft of a top-class striker for far too long.

But, seven months and 18 Premier League appearances later, Hernández only has six goals to his name, a disappointing return for the man billed as the remedy to West Ham's striking ills.

The 29-year-old never failed to hit double figures in all competitions in either of his two seasons with Leverkusen, and only missed hitting two digits once for Manchester United, in his final full season with the club when he was largely restricted to a substitute's role – even then he hit the net nine times. It seems increasingly unlikely the 99-cap Mexico international will break the ten-goal barrier this term.

At this point, it's impossible to dispute that Hernández has not met expectations at the London Stadium. But it's not entirely his fault. The former Guadalajara star, ever since his emergence as an unknown quantity at Old Trafford in 2010, has always been a service-reliant poacher.

When it comes to approach play, linking with team-mates, passing, dribbling, creating – pretty much any task that takes place outside the penalty area – Hernández isn't great. However, thread through-balls in behind the opposition's defence or flash crosses across the six-yard box and he'll dispatch such chances gleefully; he is the purest of pure poachers.

As such, Hernández's lack of goals this season reflects West Ham's inability to properly service the Mexican as much as, if not more than, any great failing on the player's part.

Hernández has come in for criticism for trying to do too much this season, pulling short or dropping wide, away from the zone in which he is effective into areas where he looks lost at sea.

In part, this can probably be attributed to the experienced striker feeling a responsibility as arguably West Ham's most high-profile player to be more holistically involved, seeing himself as the man to effect change during difficult periods. We all know that's not his game and, even considering his status, he and the team would be better served by him holding his position up front and allowing others to take care of the build-up phases.

But Hernández's self-granted licence to roam is also born out of frustration. Lacking the requisite service to thrive in his role, the ex-Leverkusen man begins to wander and looks to take a more active role in creating scoring opportunities.

Studying the statistics behind Hernández's performances this season compared to his time in the Bundesliga is instructive.

As the below graphic shows, Hernández is not scoring nearly as frequently for West Ham as he did in his two seasons at the BayArena. But the reason for his downturn in productivity is also in evidence, with his shots-per-90 average considerably lower this season. 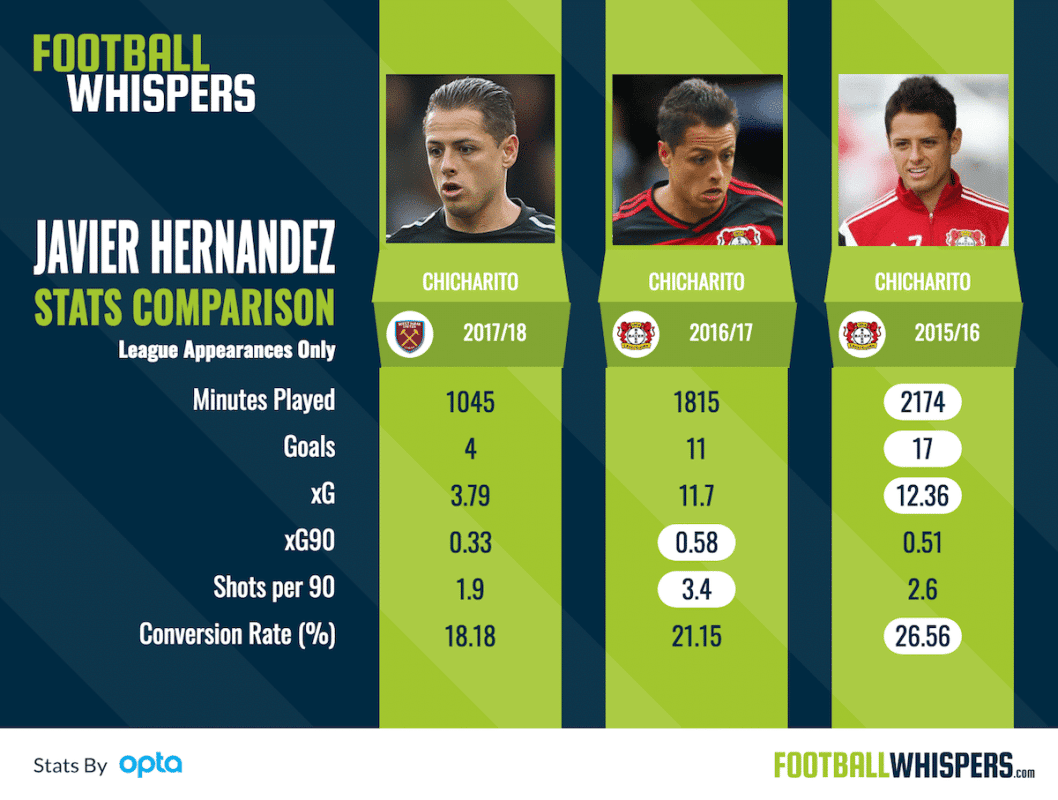 The most shocking statistic, however, is the striker's expected goals (xG) for the season so far. The xG metric uses historical data to apply a probability score for every shot taken, meaning we can broadly see how often we could have expected Hernández to score from the chances he has latched on to.

With an xG of just 4.52, we see that he has actually outperformed expectations when it comes to his finishing. At Leverkusen, he had an xG90 of 0.51 in his first season and 0.58 the following campaign. This term, he has an xG90 of just 0.33. Simply put, Hernández is not receiving enough chances to be the difference-maker West Ham thought they signed.

And, although his conversion rate has dropped since his time in Germany, Hernández's finishing has not been an issue. Besides, a striker's conversion rate will naturally drop if they are feeding off low-quality chances; their performance against their xG is a much better indicator.

Since David Moyes took charge, record signing Marko Arnautović has thrived in a central role, more able to use his physicality and creativity to foster chances for himself than Hernández.

If West Ham hope to maximise the gifts of Hernández, they must improve the supply line up to him. The Hammers don't have anyone on their side with an expected assists per 90 (xA90) of more than 0.18 – Manuel Lanzini and Arnautović are tied on this average. In truth, they have never come close to replacing the creative powers lost when Dimitri Payet moved to Marseille a year ago. The Frenchman's xA90 last term was a stunning 0.35, and 0.41 the year before.

Hernández has many flaws and is substandard in many aspects of his game; his skillset is almost alarmingly narrow. But he excels in the danger zone like few others. West Ham knew the kind of player they were signing in Hernández, and they must play to his strengths if they want to see the best of him.