The writing was on the wall for Marko Arnautović‘s West Ham United career as soon as a mysterious offer from an unnamed Chinese Super League club reached an East London fax machine – and no hostage video or crossed-arm ‘Hammers' gesture was going to change that.

Reports during the January transfer window claimed the Austrian forward had handed in a transfer request in order to force through a move to China. The forward's brother and agent, Danijel, did not hold back

“West Ham bought Marko for peanuts,” . “They paid £20million for him, which is nothing in the current market.

“They bought him to keep them in the Premier League last season and he did that. He took every award at the club; best player, signing of the season and the players' award.

“Now West Ham have a fantastic offer. It is close to double what they paid for him. He wants to go to a new market and challenge for titles. This is what he wants. It is his great desire that West Ham accept the offer from China.”

All of which made for an impressive 360 when, on January 26, Arnautović told Hammers fans he was committed to the club and would remain in East London after signing a new contract. 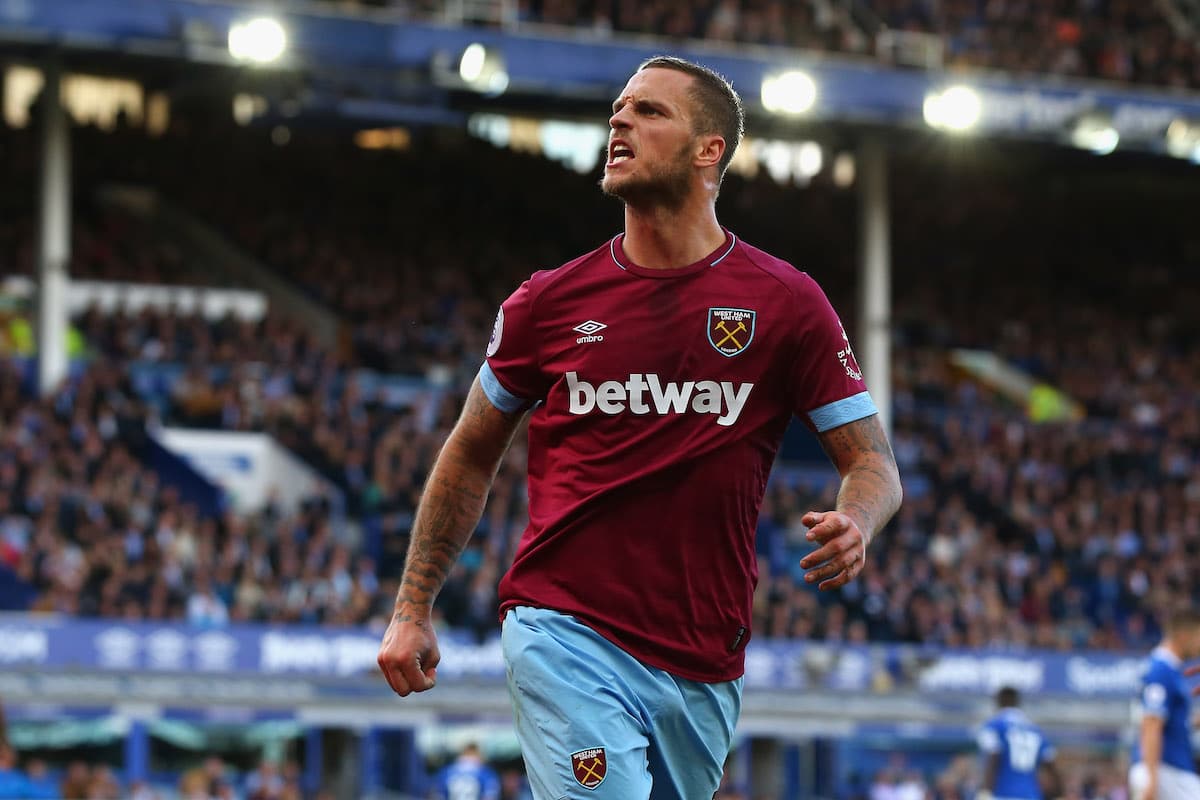 You'll be surprised to learn, then, of the latest twist in this saga after the Hammers turned down a £19.7million offer for the 30-year-old this week. Danijel Arnautović has been speaking again, telling Sky Sports News his brother is being exploited by the Hammers.

“He’s not a cow or a horse which you bring to market,” he said. “He’s a highly talented footballer who is simply being used by West Ham. He’s just a number to them.

“West Ham were trying to get rid of Marco right up until the last minute of the January transfer window and they are still trying to sell him right now. To them he’s just a commodity.

“West Ham are still speaking to the Chinese club.  He is still for sale and it’s simply a case of how much money West Ham can get for him.”

This should not come as a huge surprise. Controversy has always followed Arnautović. This is a player, after all, described by José Mourinho of all people as having the mentality of a child when the two worked together at Internazionale.

Despite finishing as the Hammers' top scorer last season with ten goals from 28 Premier League starts, there is a good case to sell Arnuatović this time. 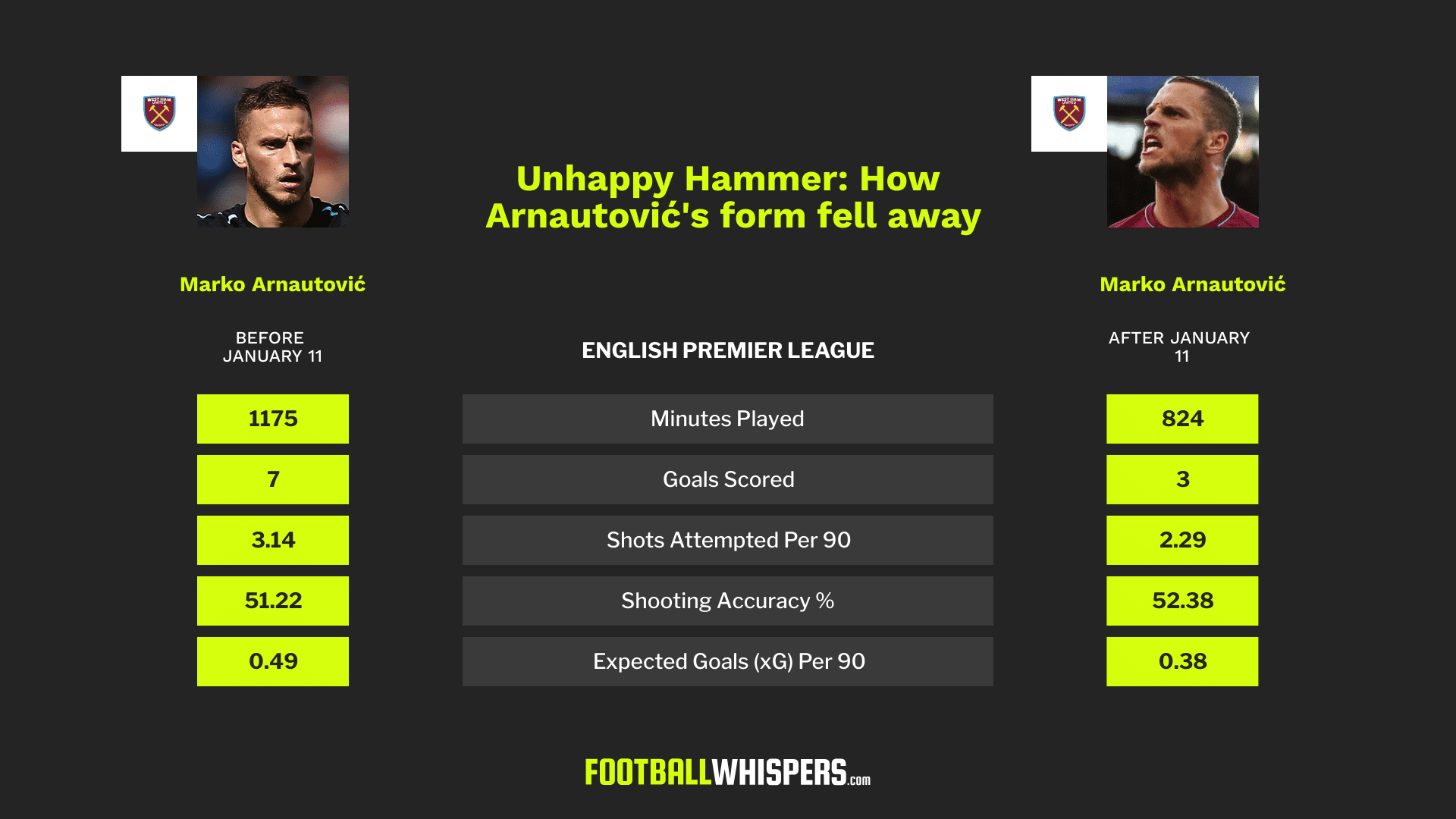 His form fell off a cliff after the reported bid from China on January 11. In 15 appearances prior to that point, the Austrian hit seven goals at a rate of 0.53 per 90. Between then and the end of the season the former Stoke City attacker managed just three at a rate of 0.32 per 90.

In fact, in almost every metric his performances suffered, despite playing roughly 300 minutes fewer across his 13 appearances. It would be unfair to suggest Arnautović sulked after failing to secure a big-money move to the Far East, but it is difficult to explain his sudden drop-off in form without it.

The problem for West Ham and manager Manuel Pellegrini is they have already shed most of their striking deadwood this summer.

The injury-plagued Andy Carroll has finally vacated the London Stadium treatment room following the expiration of his contract. That despite surely earning squatters' rights.

Meanwhile, Arsenal flop Lucas Pérez – who you'd be forgiven for forgetting was ever a West Ham player – has returned to Spain. Javier Hernández, despite a record of 0.46 goals per 90 in his Hammers career, wants to leave too.

If the Mexican poacher gets his way, Arnautović will only have £10million misfit Jordan Hugill for company in the striking department. The former Preston North End forward has the grand total of 22 Premier League minutes to his name and spent last season on loan at Championship Middlesbrough, netting just seven times in 41 outings.

With the transfer window shutting on August 8, that is far from ideal. But this saga cannot be allowed to rumble on for another four months until January.

There are plenty of examples of players wanting to leave but maintaining their form – think Luis Suarez in his final season at Liverpool or Cristiano Ronaldo's monstrous finale at Old Trafford. But Arnautović isn't in that calibre, West Ham can live without him and they should seek to end this sideshow at the earliest possibility.