Armed with that £40million striker they’ve been searching for over the past couple of years, the Hammers sat pretty in seventh as the English top-flight came to a halt for the first international break of the campaign.

Just a point behind third-placed Leicester City, Manuel Pellegrini’s men recovered from a 5-0 opening weekend defeat to Manchester City to rack up seven points from their next three games.

Sebastién Haller has settled quickly and has three goals to his name already. Manuel Lanzini is back pulling the strings and has already created 14 chances for his team-mates this term, a number only Kevin De Bruyne (16) can better.

Andriy Yarmolenko, Felipe Anderson, Pablo Fornals and Michail Antonio offer good options in wide areas for the Hammers, the sort of depth usually found within a top-six team. In Declan Rice they have one of the best destroyers in the Premier League and 32-year-old Mark Noble still has a lot to offer.

The defensive pairing of Issa Diop and Angelo Ogbonna has everything needed to dominate that part of the pitch, too, while Łukasz Fabiański is one of the best shot-stoppers in the league.

On paper, West Ham have a team capable of challenging for a top-six spot. But there are underlying issues despite the impressive start. And these issues will hurt their chances of playing European football next season if they aren’t addressed.

For starters, no team in the Premier League has a worse expected goals against total. The Irons' total of 9.02 is comfortably higher than Bournemouth’s 8.62 and bottom of the table Watford’s 6.19. It's why no team in the top ten have conceded more goals than the Hammers.

It would be easy to pin that entirely on the Manchester City defeat, and the five goals conceded in that game obviously make up the majority. But let's delve deeper and look at expected goals.

That defeat to the champions only accounts for 3.18 of the 9.02. It means in games against Watford, Brighton and Norwich City, West Ham’s expected goals against total was 5.84 – close to two per game.

This against sides not famed for their potency or attacking fluidity. Picking up all three points with such numbers simply isn’t sustainable. Sooner or later, Pellegrini will have to find a way to shore up the defensive side of his team.

This isn’t just an issue those in the defensive third have to address either. It’s a team game and defence starts with the attack.

In most matches, West Ham utilise a mid-press. They drop to the halfway line and only engage when the ball reaches that area of the pitch.

In theory, this condenses the space they have to defend but due to the shape they’re using – something of a hybrid between 4-2-3-1 and 4-4-2 – it often means those in the middle of the pitch are outnumbered. There's simply too much space for them to cover.

There are countless examples of this in the four matches West Ham have played. 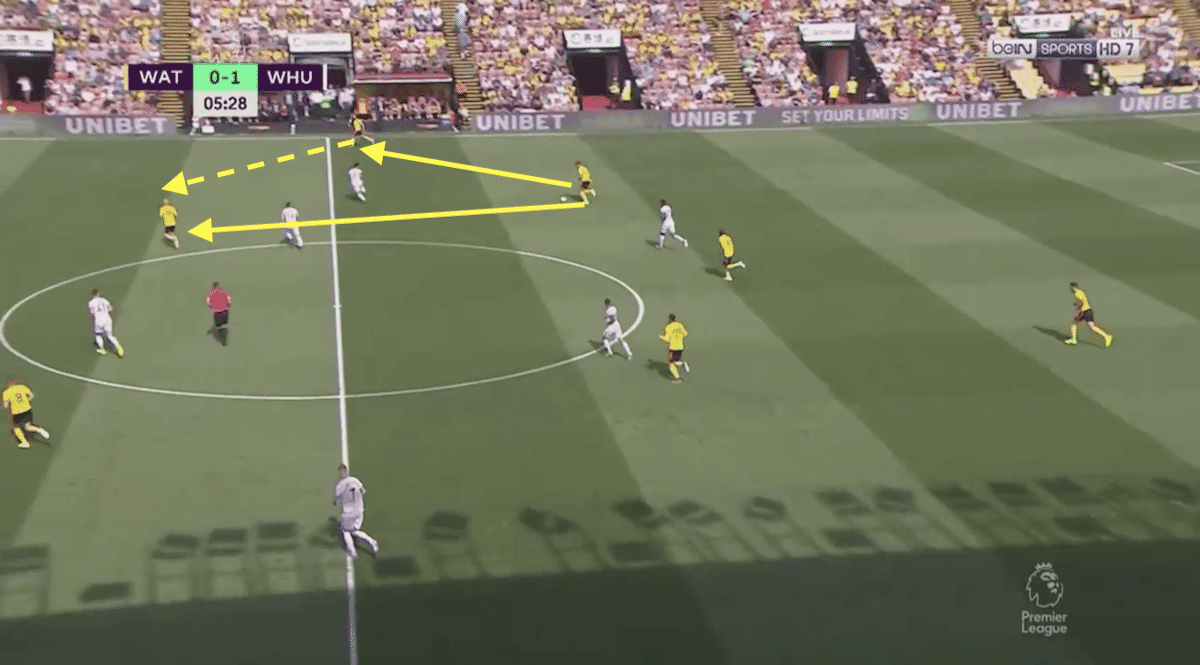 In the still above, Watford look to play out from the back. The first thing to note here is the spacing of the West Ham midfield. For a team looking to make the area they need to press smaller, they're doing a bad job dictating the space Watford can play in.

Craig Dawson, the defender on the ball, has several passing options. He opts to play to the full-back who, after carrying the ball down the line, passes to Will Hughes, who has positioned himself behind the West Ham midfield.

So not only do the hosts have space out wide, they have space centrally, too. And that is because Pellegrini's men are trying to press when they should be managing the space.

It's leaving the midfield stretched and chasing shadows. Watford are easily able to play out from the back. 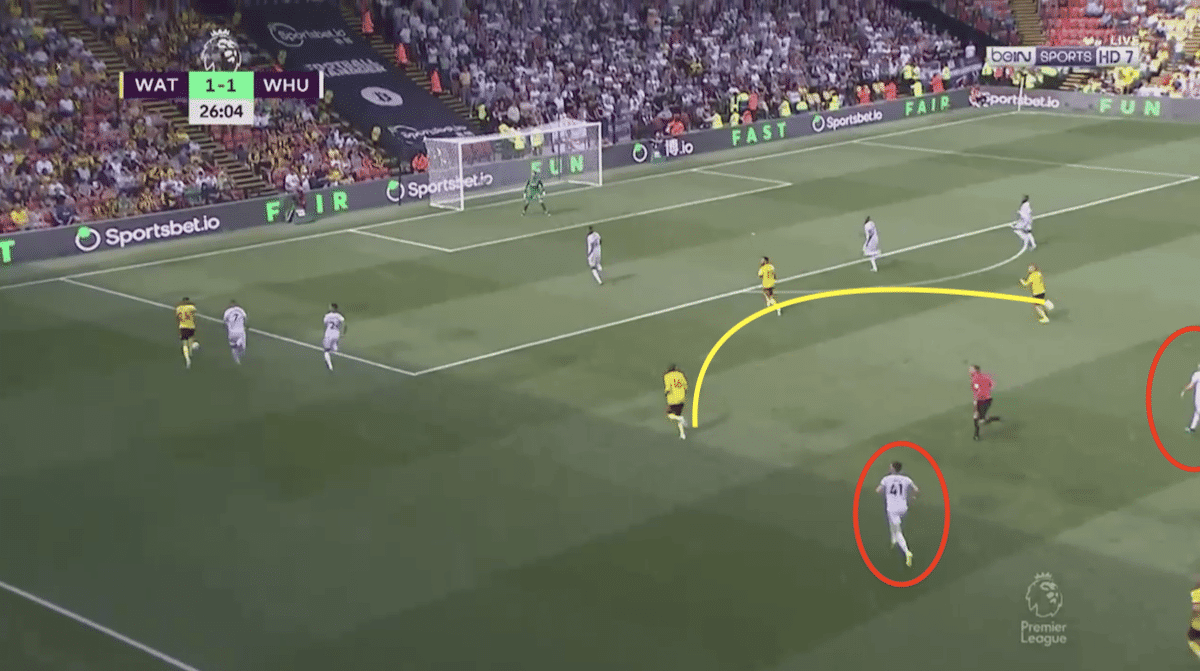 It's a similar story above. José Holebas powers down the flank, taking on Ryan Fredericks and Yarmolenko. Watford have three men attacking the penalty area in the space between the defence and the two West Ham midfielders.

Rice and Noble started off in good positions but couldn't keep up with the pace of the Watford man. This meant play progressed and left the duo in the dust. 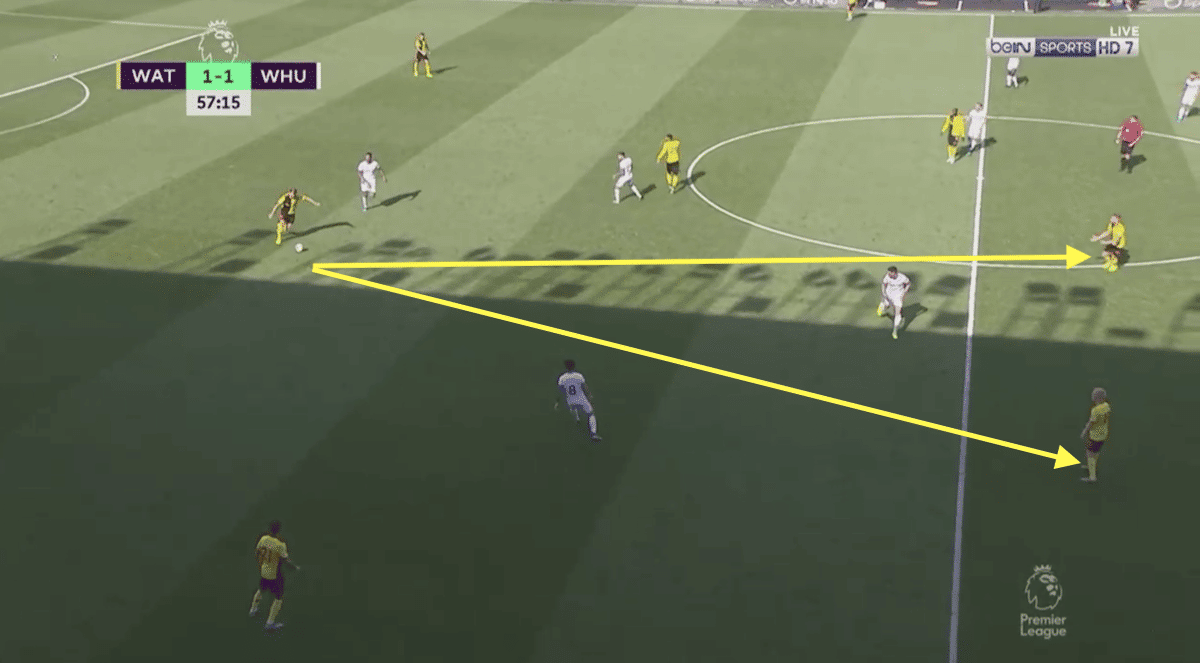 Again, the spacing of the midfield is wrong. They're too spread out to properly shut down passing lanes. Dawson has two fairly straightforward passes on and both would play through the West Ham midfield and get the hosts straight into the attacking third.

It shouldn't be that easy and Pellegrini needs to make a decision. Do the Hammers clog up the centre of the pitch and allow the opposition to have the freedom of the wings? Or, alternatively, they push higher and force opponents to go long, a tactic which should play into the hands of Diop and Angelo Ogbonna?

The current approach isn't working despite an impressive start. It's exposing the Irons in several areas of the pitch and West Ham have required good fortune to claim all their seven points.

Strike the right balance, however, and Pellegrini's men will be real contenders for a top-six spot.