On paper, West Brom vs QPR is a game that should entertain but neither are in particularly good form. Will either find a way to win this game?

Find out with our West Brom vs QPR match preview with free tips, predictions and odds mentioned along the way.

West Brom fans look away now; we're predicting another draw coming your way. If that prediction comes true then it will be four games on the spin where the Baggies have had to settle for a share of the spoils. West Brom might still be unbeaten but they only have one win in their last five games. Thankfully, QPR aren't flying either having lost their last two league games. A penalty shootout win over Everton in the week will be a confidence boost though; that injection of happy hormones will help them to a point here; it would end their league losing run too.

Don't expect the goals to rain down

It might surprise a few to see us back an under 2.5 goals prediction but we see real value in the odds. QPR are a side that can bang in goals for fun but West Brom haven't gone over 2.5 in their last four; a big part of that is their defence. The Baggies back line is one of the best in the league and we expect them to be tight in this game as they look to remain unbeaten.

Another 1-1 for West Brom

That's right we're going all out with our final prediction by calling out a 1-1 correct score prediction. For one thing, West Brom have seen two of their last three matches end with this score line. The other factor to consider is that QPR do carry a real attacking threat; they haven't failed to score in a game since March and that makes the prospect of a 0-0 unlikely. Given our other two predictions, there is only one score line we envisage unfolding.

The best odds for West Brom vs QPR

West Brom are a funny one at the moment. It's hard to be too critical of a team that are unbeaten after eight games but three draws on the spin against, let's face it, teams you'd fancy them to beat is a worrying sign for Valérien Ismaël. He'll be hoping his team can get back to winning ways here but he'll need some attacking players to step up if recent games are anything to go by. Matt Phillips has been in good form in midfield but the likes of Jordan Hugill and Callum Robinson could do more.

For QPR boss Mark Warburton their midweek win the cup is a big relief after a couple of sticky results. QPR play good football though and have real quality in their ranks. That's particularly true in forward areas with Andre Gray and Lyndon Dykes. For this game though two goal cup hero Charlie Austin might come into contention. Either way, they'll carry a threat. 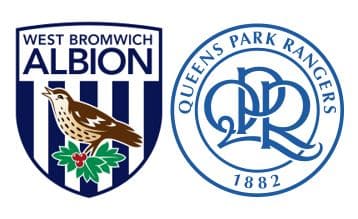