These two teams might start next season with a whole division between them but, right now, both are in what would be deemed relegation form. It makes it a winnable fixture for both parties but who will take the points? Find out with our West Brom vs Peterborough match preview with free tips, predictions and odds mentioned along the way.

Baggies to lead at HT and FT

We were going to make the prediction of West Brom to win this game but the odds are not exactly exciting; instead of steering clear of backing a winner completely, we've gone for the hosts to be leading at HT and FT. Yes, they've only won two of their last 10 games but there is way more quality at West Brom than their is at Peterborough. By the way, their form is a joke of late too. They have also managed just two wins in 10 but whist the Baggies have managed five draws, the Posh have lost six of their past 10. Their head to head record against West Brom is poor too; they last beat them in 1994.

Our next prediction is that we'll see at least three goals in this match hence the over 2.5 total goal prediction. We've already express that we fancy West Brom to run out winners but they're facing a Peterborough side that have scored in each of their last four games with every one of those matches surpassing the 2.5 cut off. The last five head to head meetings have also averaged above 2.5 goals at 2.8 per game meaning the only stat based doubt is West Brom's recent form, which has seen each of their last five fall under 2.5. We're not too worried about that though; it just gives the odds better value.

Check out the key stats & form for West Brom vs Peterborough

At the start of the season, Peterborough wouldn't have fancied their chances in this game too much. Now though, the form of West Brom will make Posh think they've got a chance of taking something home with them. The trouble is, West Brom will see this as an opportunity to get back on the winning trail.

West Brom started the season like a runaway train and had people wondering if they could be caught. Now though, their season has derailed somewhat and if they don't get back on track by winning games like this then they'll soon be in a real dogfight for the top six.

Peterborough find themselves in a dogfight of their own; it's at the other end of the table though as they sit third from bottom and three points from safety. Games like this – away at West Brom – are unlikely to define their fate but the points wouldn't half be handy!

A brief FAQ ahead of West Brom vs Peterborough 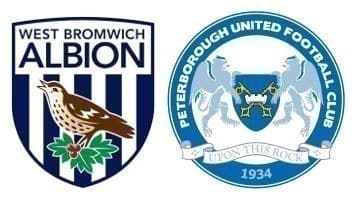