By pure maths, both of these teams are in the shake up for a playoff place come the end of the season. In reality, West Brom face a real battle to make it there. A win against fifth placed Forest would be a big help in that quest can the Baggies grab such a win? Find out with our Nottingham Forest vs West Brom match preview with free tips, predictions and odds mentioned along the way.

Nottingham Forest have been in really good form of late, especially at home where they've won eight of their last 10 matches with just the one defeat to their name in that period – that came in a FA Cup tie against Liverpool. West Brom meanwhile have been in better form of late under Steve Bruce but they still have major issues on the road. In their last 10 away matches they've won just the solitary game and lost seven.

Neither of these teams have been churning out goalfests of late and we don't see this game changing that trend either. Nottingham Forest have gone under the 2.5 goal mark in each of their last three matches. West Brom have gone south of the 2.5 mark in three of their last five on the road. On top of that, four of the last five meetings at the City Ground have gone under 2.5 as well.

Nottingham Forest are looking good for the playoffs right now and can even afford a slip up or two between now and the end of the campaign. West Brom, however, need absolute perfection to have any hope to make the top six.

Nottingham Forest might have suffered a defeat to fellow promotion rivals Luton last time out but they remain in a strong position to lock down a top six finish owing to their games in hand. If results go their way on Easter Monday, they could end the day with a seven point cushion over seventh place with most teams having just nine points left to play for.

They say loyalty is dying in modern football and whilst West Brom have changed manager during this campaign they are perhaps paying the price for waiting so long to wield the axe. The Baggies have started to show some of what they're capable off and clearly have talented players but it does feel like they're going to run out of games.

A quickfire FAQ on Nottingham Forest vs West Brom 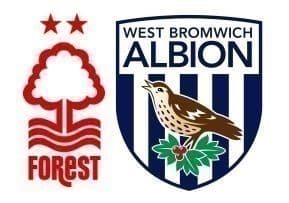