It's hard to deny that West Brom very much appear to be the team to beat this season. How will Millwall get on as they visit the Hawthorns? Find out with our West Brom vs Millwall match preview with free tips, predictions and odds mentioned along the way.

West Brom are currently sat joint top of the Championship table after an unbeaten start to the campaign. In fact, the Baggies only dropped points came in an away at Bournemouth on the opening day. That means they've recorded four league wins on the bounce. For Millwall, things have been somewhat tougher going. They've won their last two games in all competitions but had taken just one point from nine prior to that, which shows just how beatable they are. West Brom should have too much quality and, with home advantage to boot, this should be a banker.

A game loaded with goals

Our next tip for West Brom vs Millwall is that the two teams will serve up a minimum of three goals i.e. over 2.5 in the total goals market. West Brom have seen just one of their last five fall short of that benchmark; their game average across that five game period is a mammoth 3.8. For Millwall, their last four matches have all surpassed 2.5 goals with a total of 14 goals hitting the net. That's an average of 3.5. With form and averages like these two are serving up, a few goals surely await.

Both teams to contribute to the scoring

Our third and final prediction for this game is that both teams will register on the scoresheet. West Brom have kept a couple of clean sheets this season but both teams have still netted in three of their five league matches to show they are far from solid. As for Millwall, they're yet to see a nil in any league score line this season. When you look at where the blanks have come from on the West Brom side of things, it means that neither side has failed to score in a league game so far this campaign.

The best odds for West Brom vs Millwall

West Brom have been flying this season with just two red marks to their name; one came in a cup match against Arsenal, which nobody will care about and the other was an away point that will transpire to be a good result at game week 46. On top of that, they showed last time out they're capable of delivering when you against it too. Callum Robinson will be back fit for this game too, which is a big boost. Millwall haven't had the best of starts and sit in 17th; it's probably not far from where the neutral fan expects them to be. After two wins on the spin have hushed up the three game winless period, the Lions can afford to slip up here. They'll be thinking they can do more though. If that's to happen Bartosz Bialkowski might need to be in top form.

FAQ on West Brom vs Millwall 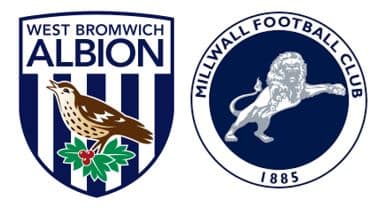