After dropping out of the top flight last year, West Brom are now ranked as the favourites to win the Championship. Will they live up to their favourites tag here? Find out with our West Brom vs Luton match preview with free tips, predictions and odds mentioned along the way.

West Brom vs Luton: Our predictions

West Brom to open home account with a win

West Brom didn't win many matches last year against Premier League opposition but this season should be very different with the likes of Luton a million miles away from being Premier League quality. It's a big part of the reason we're backing West Brom to win the match. On top of that though, the Baggies are in better form than Luton. West Brom are unbeaten in their last five winning three and drawing two. Luton meanwhile have lost one and drawn two of their past five matches. West Brom have won the last four head to head matches too.

Not a game for the neutral

West Brom might be in good form in terms of chalking off results but they are unlikely to win too many prizes for the spell bounding football they churn out; they're an efficient outfit though. Of their past five matches three have come up short of three goals with two of the last three meetings between West Brom and Luton falling short of the 2.5 mark too. Luton's recent form does lend itself to more goals but we believe it will be the hosts dictating what goes on during this match.

A clean sheet for West Brom

In our free tips to this point we've mentioned the unbeaten stretch West Brom are on along with the fact that they're an ‘efficient outfit'. Well, this prediction feeds off those two elements. Part of their good form has been that they give so little away; they've conceded just two goals in their past five matches with four clean sheets recorded. Last season, Luton averaged less than a goal scored per match.

Spot the top odds for West Brom vs Luton

A victory built from the back

West Brom are no longer managed by Sam Allardyce but, don't worry, the club are still unlikely to win too many plaudits for their style of play. They're unbeaten in five matches but it's built on a solid foundation with the winning of games left to the obvious quality in their ranks with the likes of Callum Robinson very much in hot form. For Luton, they made a terrific start to their Championship campaign with a big win but an away day at the Hawthorns is almost a free hit for them. If Simon Sluga produces a masterclass in goal then maybe, just maybe, Luton could rob a point.

Final thoughts ahead of West Brom vs Luton 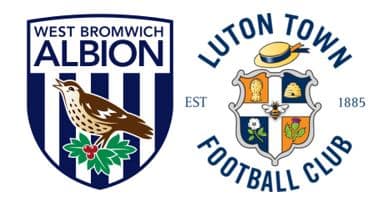