When Mohamed Salah scored his 31st goal of the season, equaling Liverpool’s single-season Premier League goal-scoring record, it all looked so simple for the Reds

They were 2-0 up, courtesy of Danny Ings’ first goal since 2015 in the fourth minute and Salah’s strike in the 72nd, but it was then that the West Bromwich Albion fight-back began.

Jake Livermore netted with ten minutes to go when Liverpool failed to clear from a corner and Salomón Rondón headed a free-kick past Lorius Karius in the 88th minute to level for the Baggies.

It is a result that won't keep West Brom up, and they could mathematically relegated tomorrow, however, they have shown fight in recent games that was lacking under Alan Pardew.

And it's with the former Baggies boss that we start the five things we learned from the draw at the Hawthorns.

Between Tony Pulis' sacking and Pardew's appointment West Brom played twice in the Premier League under caretaker boss Gary Megson. They drew both games, against Tottenham Hotspur and Newcastle United.

Pardew failed to get the same reaction from the players and it's his time at the club which has doomed them. Yet, interesting, after his dismissal Megson revealed Pardew had phoned him and claimed he'd “stolen my thunder a little bit.”

It's a bizarre statement and it would be interesting to hear what Pardew thinks about Moore's short time in charge. He is yet to taste defeat and masterminded a victory against Manchester United at Old Trafford last weekend.

It seemed his sparkle had worn off against Liverpool but then West Brom rallied to complete a dramatic comeback.

During the initial two thirds of the game, Moore’s side were weak on both sides of the ball, structurally and individually vulnerable in defence and unable to find their forwards in attack.

However, towards the end of the game, after changing to a back three, they finally started to press Liverpool higher up the pitch and the increased urgency paid off.

It seems unlikely the draw will be enough to keep them up. Livermore said the players will “see what happens” in his post-match interview but both he and Rondón were dejected. They know their fate is sealed.

Liverpool’s chequered record of defending set pieces is much-talked and much-written about.

Just after the half-hour mark at the Hawthorns West Brom had a flurry of corners. Three times from deliveries from the left-hand side Craig Dawson could have had a free header after evading the attention of Georginio Wijnaldum.

It was a warning for the Reds. While they weren't being breached, they were getting away with mistakes. That rarely lasts.

And with just minutes remaining Roberto Firmino let Rondón bustle past him and the Venezuelan scored the equaliser.

Before the match, Salah made it clear in an interview with Sky Sports that he didn’t just want to win the Premier League Golden Boot, he wanted to claim all English top flight records.

And with his goal against the Baggies, he’s now equaled the record for most goals in a 38-game Premier League season. However, there’s still the target of the 34-goal mark, which Alan Shearer and Andy Cole achieved when a Premier League campaign consisted of 42 games.

“It's very clear, I want to break the Premier League [record],” Salah said to Sky before the game against West Brom. “Thirty-one goals in a 38-game season. One goal to go, right? But I want to break both records…it's just four goals in four games.”

His drive to get the goals is shown in the stats too, with four shots and four attempted take-ons (three successful) against West Brom.

But he also attempted five passes into the penalty area. None were completed but Salah showed that he’s not all about himself. 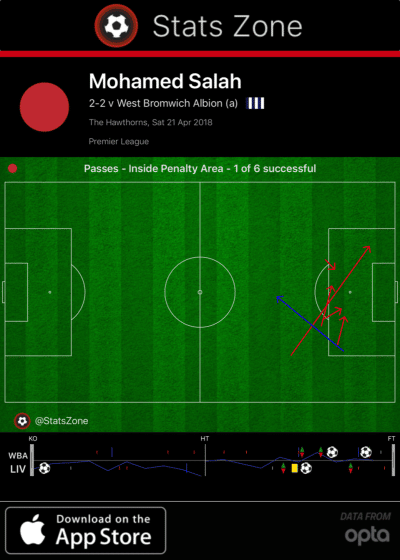 For the first 70 minutes of the game West Brom attempted to sit back, soak up pressure and hit Liverpool on the break. It didn't work and the visitors had it easy.

Virgil van Dijk epitomised Liverpool’s comfort. In the first 70 minutes he completed 68 passes, a 92 per cent success rate. In the last 20, however, he was successful with just seven, a completion rate of just 70 per cent. 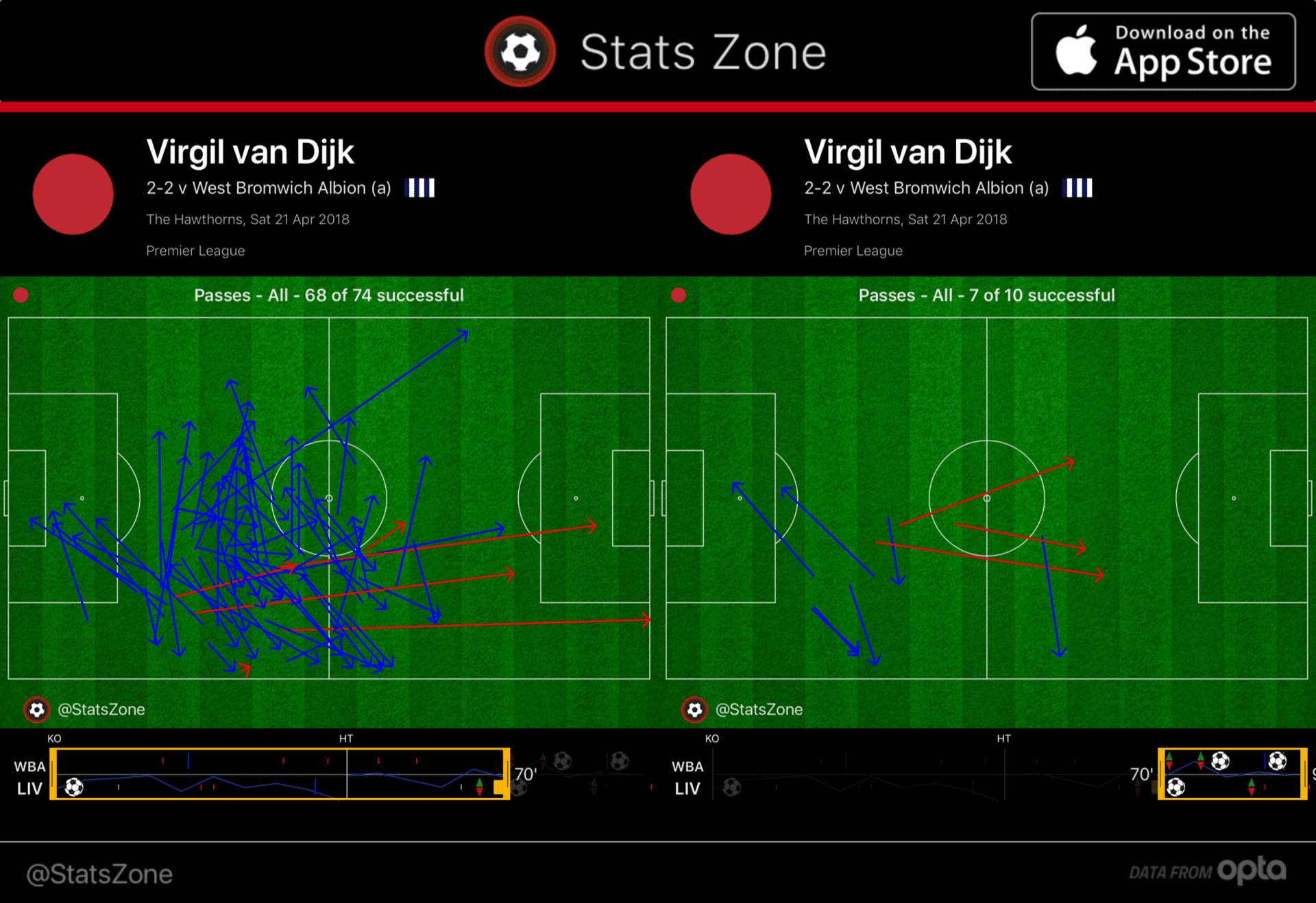 West Brom had just one shot on target in the entire first half, and just one more from 45 to 70 minutes. From there until full-time they had four.

Liverpool, with a Champions League semi-final first leg against Roma on Tuesday to come, rotated their side and the likes of Salah and Sadio Mane were brought off.

However, Moore's change to a back three in the latter stages paid off and the Baggies caretaker boss deserves credit for being bold with his changes.

Ings scoring his first Premier League goal in 930 injury-plagued days was one of those rare moments in football which was just unarguably nice.

His last strike in the English top flight came in October 2015 in Brendan Rodgers’ last game in charge of Liverpool.

In the fast-paced world of football, so much has changed since then, and it must have been incredibly hard for Ings to keep going through each of his set-backs.

But he did, and he got his reward, and his celebration said it all.