It’s only after promotion to the Premier League that the hard work really starts. And

With a number of their key players only at Villa Park on loan, the challenge was to either sign them up permanently or bring in replacements of similar quality. The most important part of Dean Smith’s to-do list would’ve been to find someone to replace Tammy Abraham.

The on-loan Chelsea forward plundered 26 goals in all competitions for the Villans last season, with 25 of those coming in the Championship. Including his assists, he had a direct hand in 35 per cent of the goals they scored during 2018/19.

Replacing that sort of output wasn’t ever going to be easy but in Wesley, they now have a player who can fill the Abraham role. Furthermore, he could potentially improve on what the 21-year-old achieved during his single season with Villa.

The Christian Benteke links are inevitable. A brutish looking forward arriving from Belgium having made a considerable impression in the Jupiler League. But despite similar career moves, the two forwards couldn’t be further apart in terms of style.

Yes, Wesley is aggressive in the air. He puts his 6ft 4ins frame to good use and wins 50 per cent of his aerial duels. Unlike Benteke, his game isn’t shaped around being a focal point for others to play off.

Think of him as a taller, faster version of Roberto Firmino. He’ll harass the opposition, he can lead the press and he’s intelligent enough to play his part in setting pressing traps having done all of that for Club Brugge.

The club-record signing will surprise plenty of teams. As cliché as it sounds, he has a good touch for a big man. He links play well, completing 74 per cent of his passes compared to Abraham’s 69 per cent, all while averaging eight more passes per 90.

However, he wasn't as prolific as the England youngster, averaging 0.27 fewer goals on a per 90 basis. It is worth taking into account, though, that only one of Wesley's 13 goals arrived from the spot while five of Abraham's were penalties.

What is impressive, and what the recruitment team at Villa Park should be given credit for, is finding a forward with a similar shot profile to Abraham's. It makes life easier for the midfielders if they're not having to adapt their game too much to get used to a new forward.

The majority of efforts come from inside the penalty area. Even more impressive is how both strikers land at least 50 per cent of their efforts on target.

Wesley isn't reliant on a high number of opportunities (2.45) and he's getting half of them on target. He's not wasteful and that sort of accuracy is something Villa will need next season is chances are at a premium in the top flight. 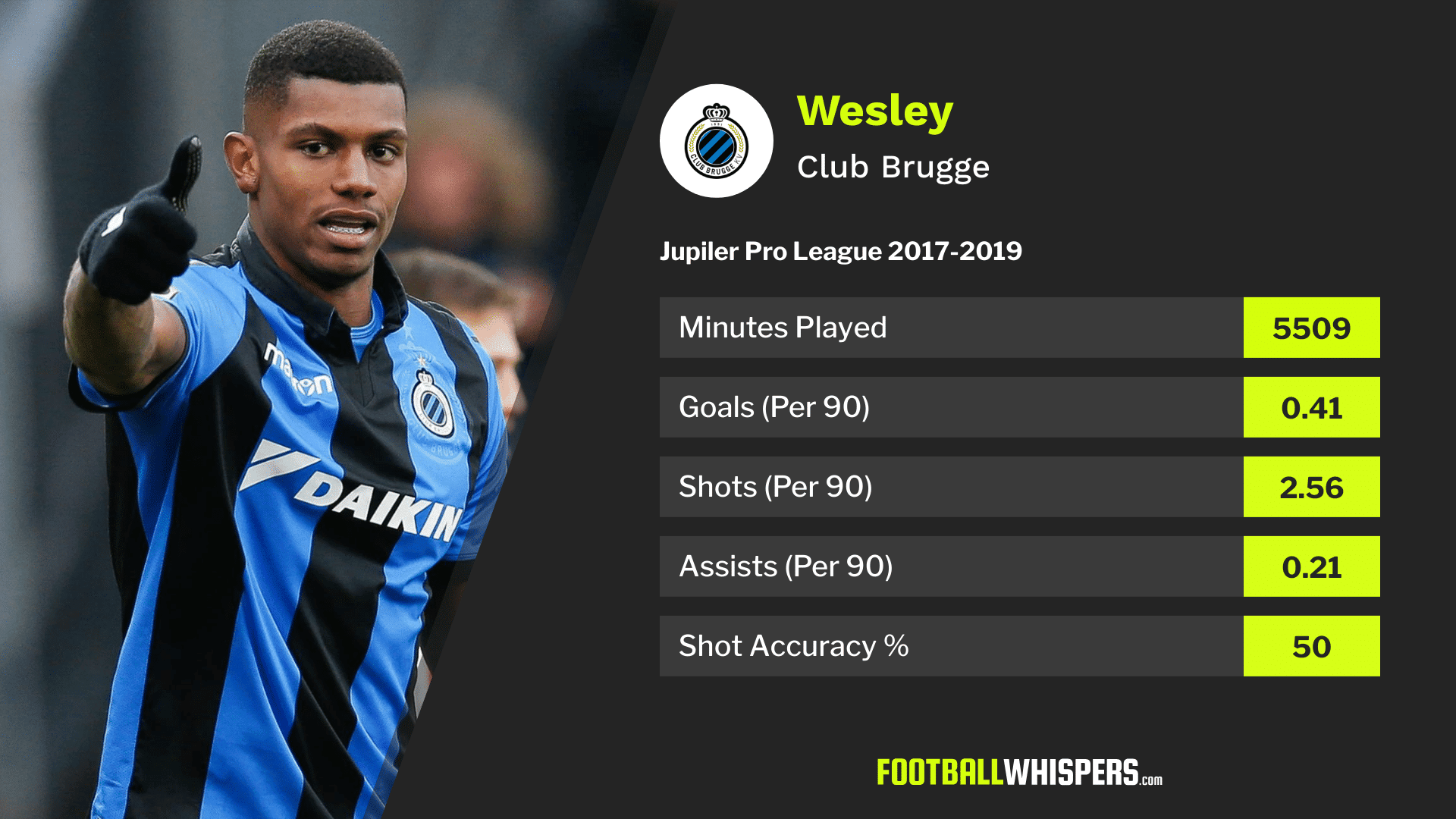 The Brazilian is a fairly accurate finisher. At 22 he still has time to develop an edge in the area but, for now, he's delivering what is expected of him. Last season he was expected to score 13.7 goals. He netted 13 times.

The elite outperform this metric but it highlights how reliable he is and how his output is sustainable. The graphic above shows his averages for the past two seasons in the Belgian league. Another indication at how reliable a threat he is.

He will have to adapt to the Premier League but, on paper, Villa have signed a striker who scores repeatable goals, links play well and is a nuisance for opposition defenders. Wesley has everything needed to become a legend at the club.