A centre-back to partner Virgil van Dijk. A centre-midfielder, regardless of whether Emre Can signs a new contract. Someone to fill the void left by Philippe Coutinho – in attack and not midfield. And a goalkeeper to replace Simon Mignolet and rival Loris Karius. That was the summer wish-list for the majority of Liverpool fans.

It’s safe to assume an £88million-rated forward wouldn’t have been wanted by too many Liverpool supporters this summer, the reason being the brilliance of Mohamed Salah, Roberto Firmino and Sadio Mané. But, according to recent reports in both England and Germany, it’s what sits at the summit of Jürgen Klopp’s wanted list.

Miguel Delaney of the Independent claimed the Reds are interested in RB Leipzig forward Timo Werner. Then, when appearing on a TAW transfer special, Delaney revealed the interest in the striker was more than just a casual enquiry. And now German publication Bild have revealed he will be available this summer for a bargain €100million fee.

On the surface it may seem like a strange deal.

Klopp has at his disposal a forward line that is feared throughout Europe. There is a lack of depth but it’s a void in the squad that isn’t easy to fill.

There aren’t many players who will join a club knowing there’s very little chance they break into the starting XI and those that are happy to haven’t got the requisite quality to be turning out for the Reds. It’s a riddle very few teams have been able to solve.

Werner is a starter for RB Leipzig and is perhaps the jewel in their crown now that Naby Keïta is on his way to Liverpool. Why would he be happy to leave an environment he’s thriving in unless he’s a guaranteed starter?

His aspirations are to be the leading striker for the German national team. Competition might not be fierce but it’s unlikely he’ll get the nod ahead of others if he’s not turning out for a team on a regular basis.

There was always a feeling in Germany the Stuttgart-born forward would end up being the successor to Robert Lewandowski at Bayern Munich. The Bavarians are trying to piece together a squad filled with German talent and getting in the countries leading No.9 must be at the top of their to do list.

Bayern’s hubris, however, might be their downfall. RB Leipzig aren’t like other German clubs. They aren’t there to supplement the Bundesliga leaders. It’s why there’s a chance they opt to sell Werner to a club abroad. This is where Liverpool’s good relationship with them comes into play. 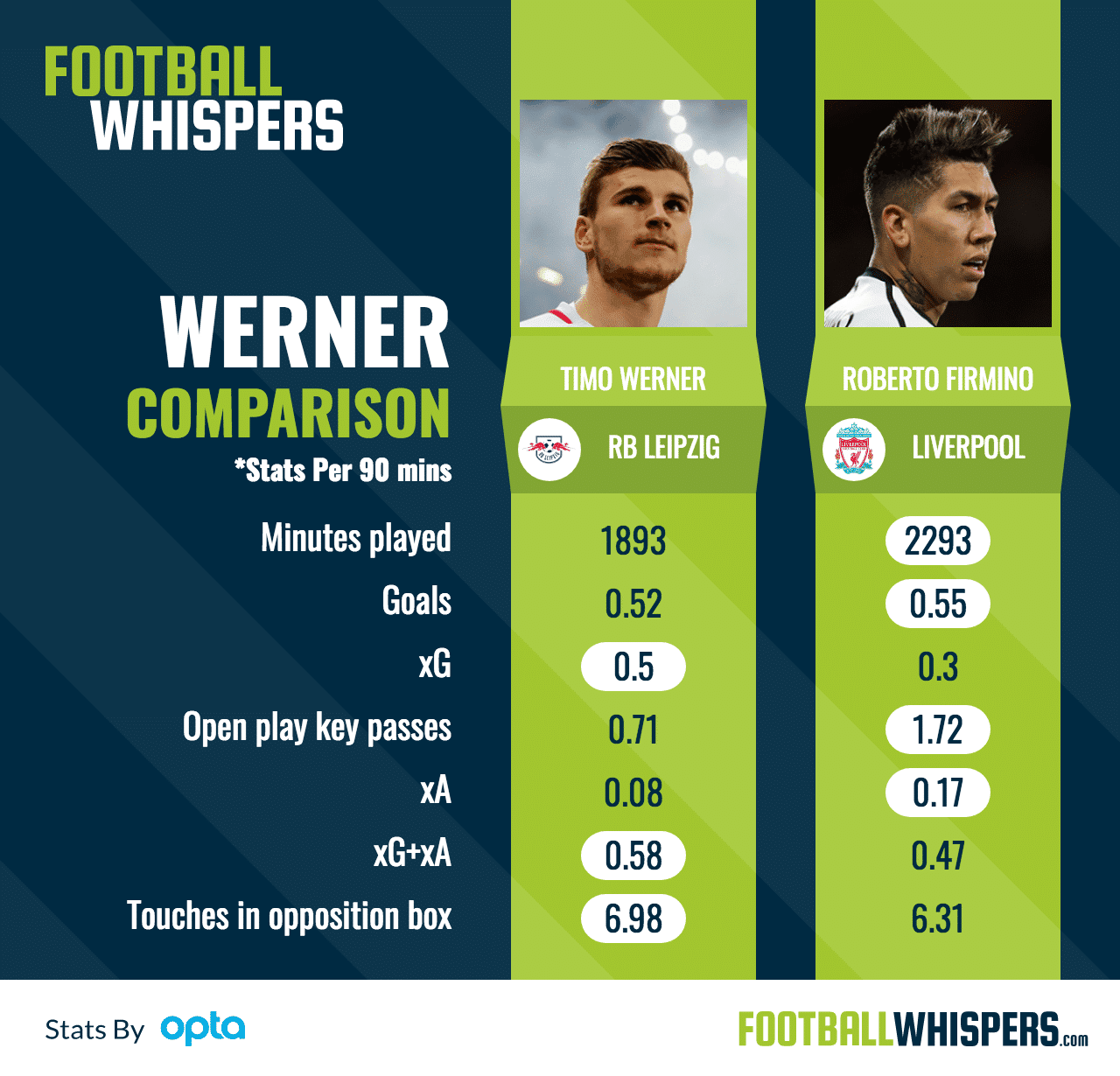 Yes, there’s a narrative in the media that Liverpool and Ralf Rangnick don’t get on. But let's look at the facts. The Reds agreed an unusual deal with the Europa League quarter-finalists which allowed them to keep Keïta for 12 months and receive a premium on his buyout clause.

When Rangnick said no to do a deal in January, Liverpool backed off. Everything was seemingly done on the German’s terms so why wouldn’t they want to do business with Michael Edwards again?

Kicker, however, have contradicted the report in Bild and Werner was asked about his future while on international duty. He revealed he had been told he wouldn’t be allowed to leave the Red Bull Arena.

“I did not want to clarify anything (with regards to my future), just repeat what our sporting director Ralf Rangnick has always said, that he would not let me go – even if I wanted to – in the summer,” the RB Leipzig No.11 said.

“Ralf Rangnick says to me that I will stay, no matter what happens – as will those around me, I think we will have two or three very good new players coming in the summer”

But how many of the cards do the German club actually hold? Werner has just two years remaining on his deal in Leipzig. There are claims in Bild that the Red Bullowned club want to tie the recently turned 22-year-old down to a long-term deal.

If he’s negotiating a new contract then now is an ideal time to make a move. It backs his employees into a bit of a corner. After all, If the striker rejects what’s on the table then there’s a risk they lose him for nothing in 2020.

German players have a history of doing that. 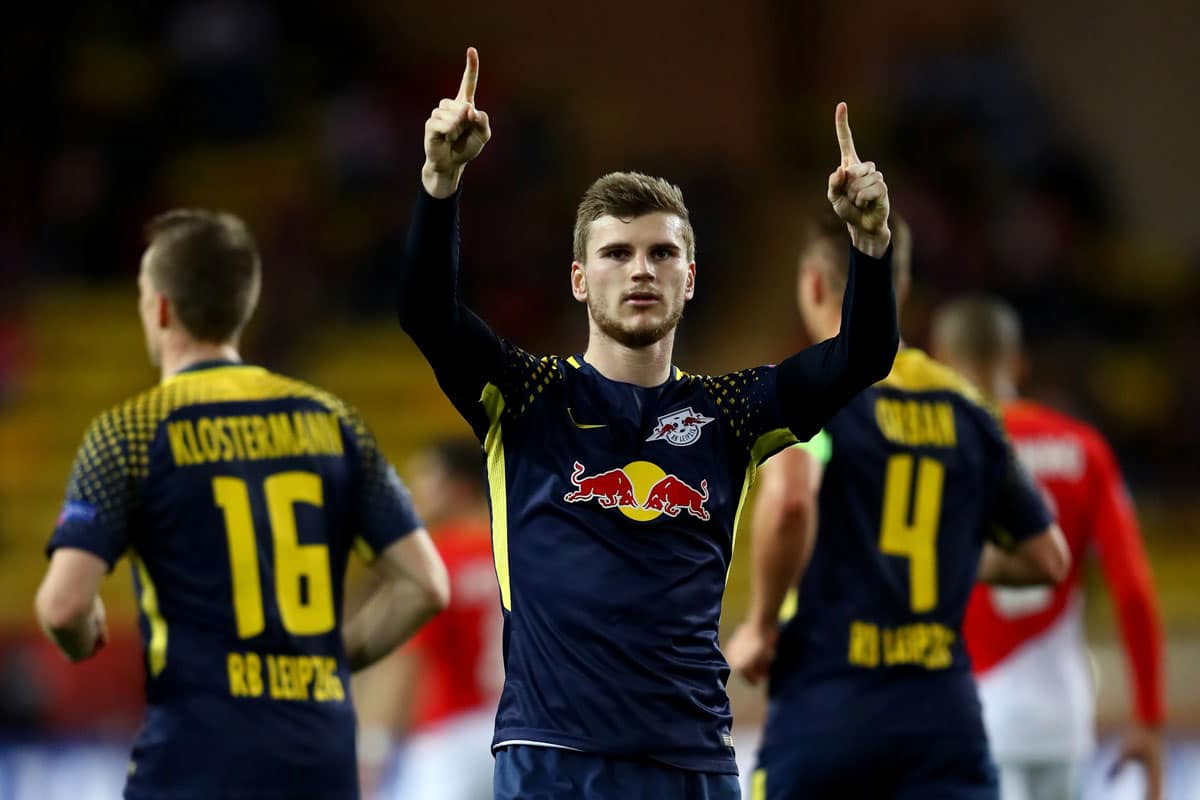 Liverpool could swoop in with an offer. He’s revealed in a recent Interview with FourFourTwo he wants to play in the Premier League: “Manchester United and Liverpool were the teams I watched quite a lot in England. They were the two that I'm a little bit a fan of, because they have so much history.

“But probably not in the next few years – later, when my English is a little bit better. I'm very comfortable at RB Leipzig, though.

The former VfB Stuttgart player added he is happy with things as they are, but was he really going to say otherwise? Course not.

All things considered, a move for Werner doesn’t seem out of the question. Klopp managed to convince Keïta and van Dijk to join the Reds ahead of a number of other clubs, do you think he’d struggle to convince a player born in the same German state as him not to join his revolution on Merseyside?

Furthermore, Karlheinz Förster, Werner’s agent, was an idol of Klopp’s growing up. Reports in Germany suggest that they’re now friends and it shouldn't be overlooked. That could be important in the player’s next move

While James Pearce of the Liverpool Echo has rubbished the stories, claiming the Reds are happy with their attacking options, it'd be naive on the club's part to not explore the possibility of signing Werner. 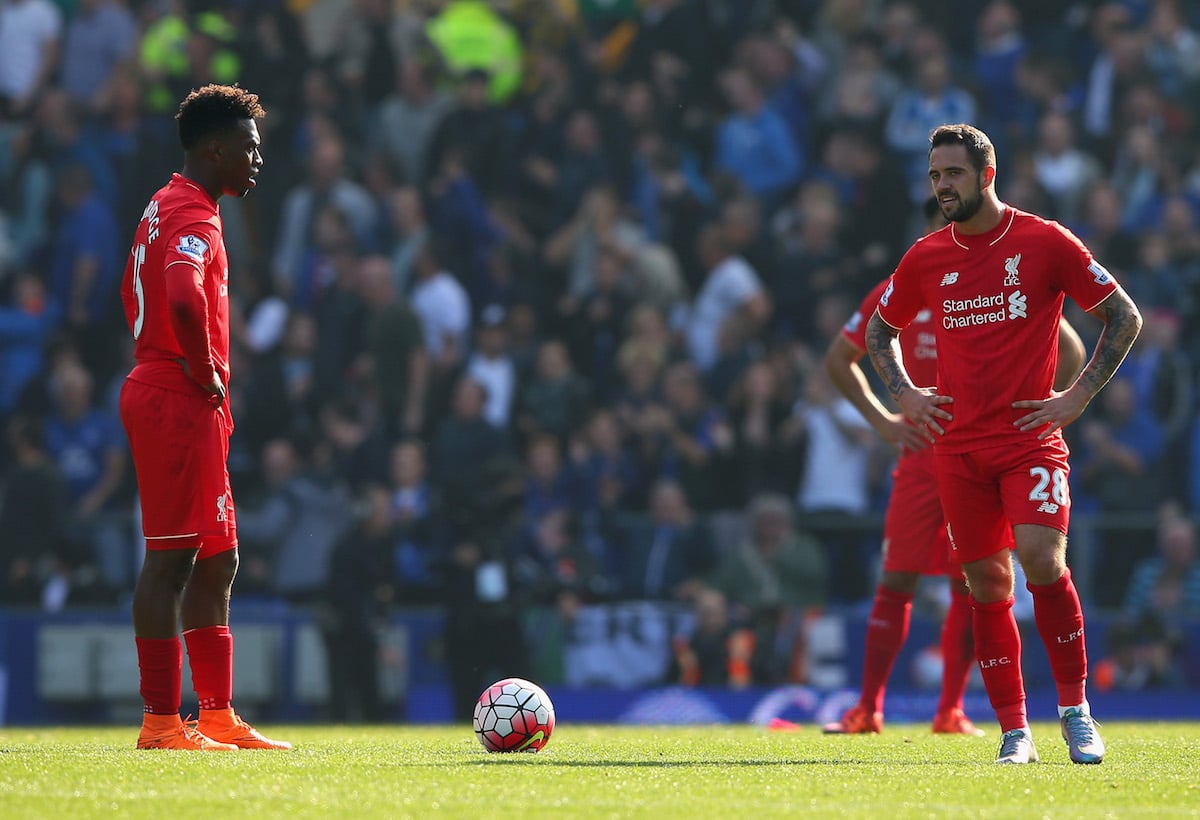 Danny Ings gets a mention in Pearce's report but he's still an unknown. Injuries have deprived him of the best part of three seasons at Anfield and given he has just two years left on his deal, if an offer arrives can the club really reject it?

Daniel Sturridge and Divock Origi both have 12 months remaining on their contracts too and it's unlikely they'll be extending their stay in Liverpool. That leaves Dominic Solanke and Rhian Brewster. The two English attackers are both highly rated but are either ready to lead the line in a crunch match?

Werner is the perfect fit for Liverpool

As forwards go, the RB Leipzig No.11 is, on paper at least, a perfect fit for Liverpool. If the club have the money to spend on him without it having an impact on other arrivals then fans should be all aboard the Werner train. 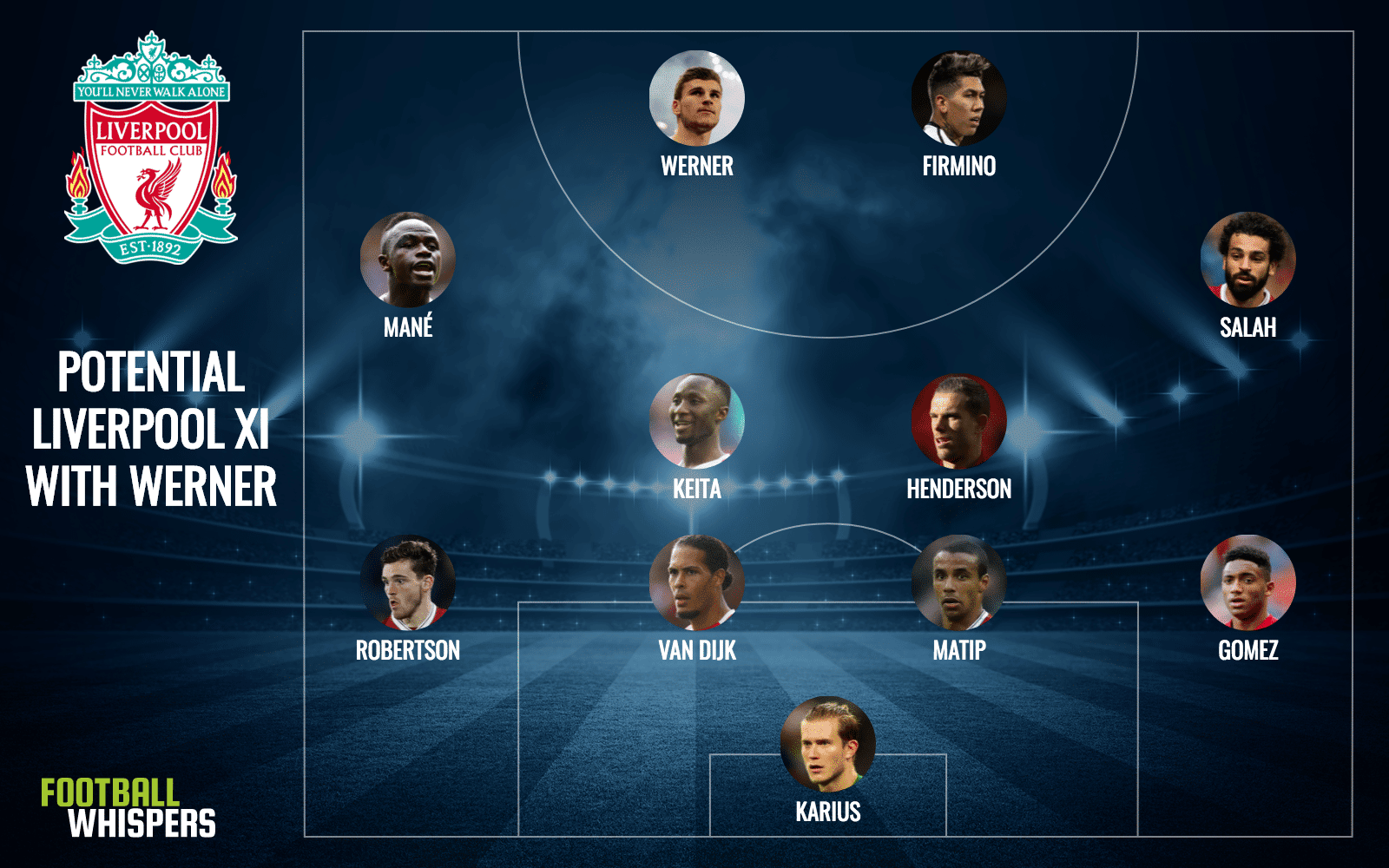 There’s not many teams across Europe who play with a fluid frontline like Klopp’s side but RB Leipzig do. They operate in a 4-2-2-2 system, a shape Liverpool fans witnessed in the 4-1 demolition of West Ham United earlier on in the season.

Alongside the likes of Yousef Poulsen, Marcel Sabitzer, Emil Forsberg, Bruma and Jean-Kévin Augustin, he’s part of a fluid and interchangeable quartet for the Bundesliga outfit that isn’t too dissimilar to the Liverpool four of Salah, Mané, Coutinho and Roberto Firmino.

The fact Werner played regularly out wide for Stuttgart has had a positive influence on him. He was initially tipped to be the next Marco Reus but under Ralph Hasenhuttl, the RB Leipzig manager, his game has been refined. He’s now a ruthless finisher who has all the makings of being one of the best strikers in Europe. 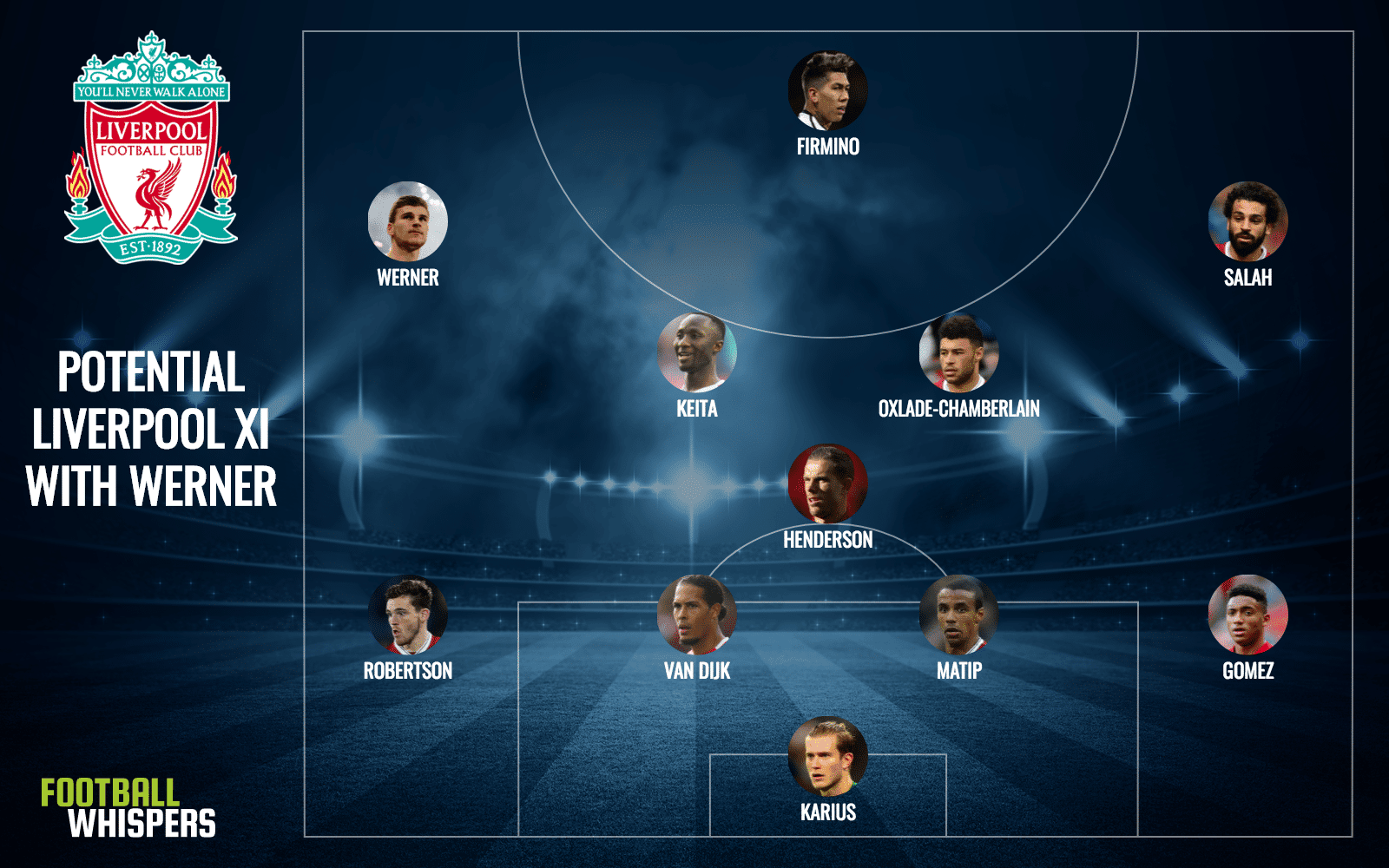 Despite being a goal-getter he’s forever finding himself out wide, working the channels and isolating defenders in areas they aren’t comfortable in.

He’s instinctive in the penalty area, looks to get in behind and plays on the shoulder of the last man. Without trying to fan the flames of expectation, there are some similarities between him and the 2013/14 version of Sturridge. Even the most disciplined defensive units find themselves stretched against such movement.

Since his arrival in Leipzig he’s been involved in 47 goals in the equivalent of 54 matches. He’s failed to replicate last season’s output  when he struck 21 times in the Bundesliga but he’s still a one goal every two games player.

And that’s in a team adapting to their first campaign in Europe. There was always going to be a hangover but the quality is still there.

It’s Werner’s versatility, however, and not his goal tally which makes him so valuable, especially if he were to move to Anfield.

He can play anywhere across the front three and in a front two. He’s also got the profile and the ability to play not just alongside Salah, Firmino and Mané, but in place of them as well if needed. It’s rare to find a player in the modern game who is just as effective leading the line as they are in a wide role at such a young age.

But Werner is and it’s why he’s readymade for a team on the cusp of great things.

His arrival wouldn’t be a knock on Firmino either. The Brazilian is arguably the team’s most important player. But that’s the issue. There’s an over reliance on the No.9.

The media mention it and fans talk about it. Going after Werner could be Klopp’s way of diversifying. It’d mean an injury to the former Hoffenheim man wouldn’t derail the season.

Bringing in Werner could prove to be the signing of the summer for the Reds and exactly what they need.