Heading into the first international break of the season, RB Leipzig sit atop the Bundesliga – they’re the only team in the German top flight with a 100 per cent record having won all three of their matches.

Die Roten Bullen were expected to challenge for Europe but very few had them down as genuine contenders for Bayern Munich's crown. Not with it potentially being a season of transition for the Red Bull-owned club.

Julian Nagelsmann replaced Ralf Rangnick and arrived with his own philosophy and playing identity. Yes, the former Hoffenheim tactician does, at times, implement a similar three-at-the-back system to the one used at the Red Bull Arena by Rangnick.

However, while the 61-year-old coach wanted to make RB Leipzig difficult to beat – they had the best defensive record in the Bundesliga last season – Nagelsmann is all about flexing the attack he has at his disposal.

Only Bayern (11) have scored more goals this term and it’s worth noting that RBL are on par with their underlying numbers while the Bavarian’s are outperforming their expected goals total by 3.62.

It’s even more impressive when you consider Nagelsmann men have faced off against two rivals. Eintracht Frankfurt succumbed to a 2-1 defeat before a Timo Werner-inspired performance saw them pick up all three points at BORUSSIA-PARK against Borussia Mönchengladbach.

Another coup was tying Werner down to a new deal. The 23-year-old’s contract was set to expire in June 2020 and reports claimed he was determined to move.  Bayern wanted him, Liverpool were believed to be long-term admirers, too. But RBL held firm.

Unlike so many other German clubs, RBL weren't bullied by the Bundesliga juggernauts. They kept hold of their prized asset and he could be key in piecing together a genuine title bid.

Werner has started the season in electric form, netting five times in the three matches. And his hat-trick against Gladbach, the first of his career, showcased just how devastating he can be on his day. 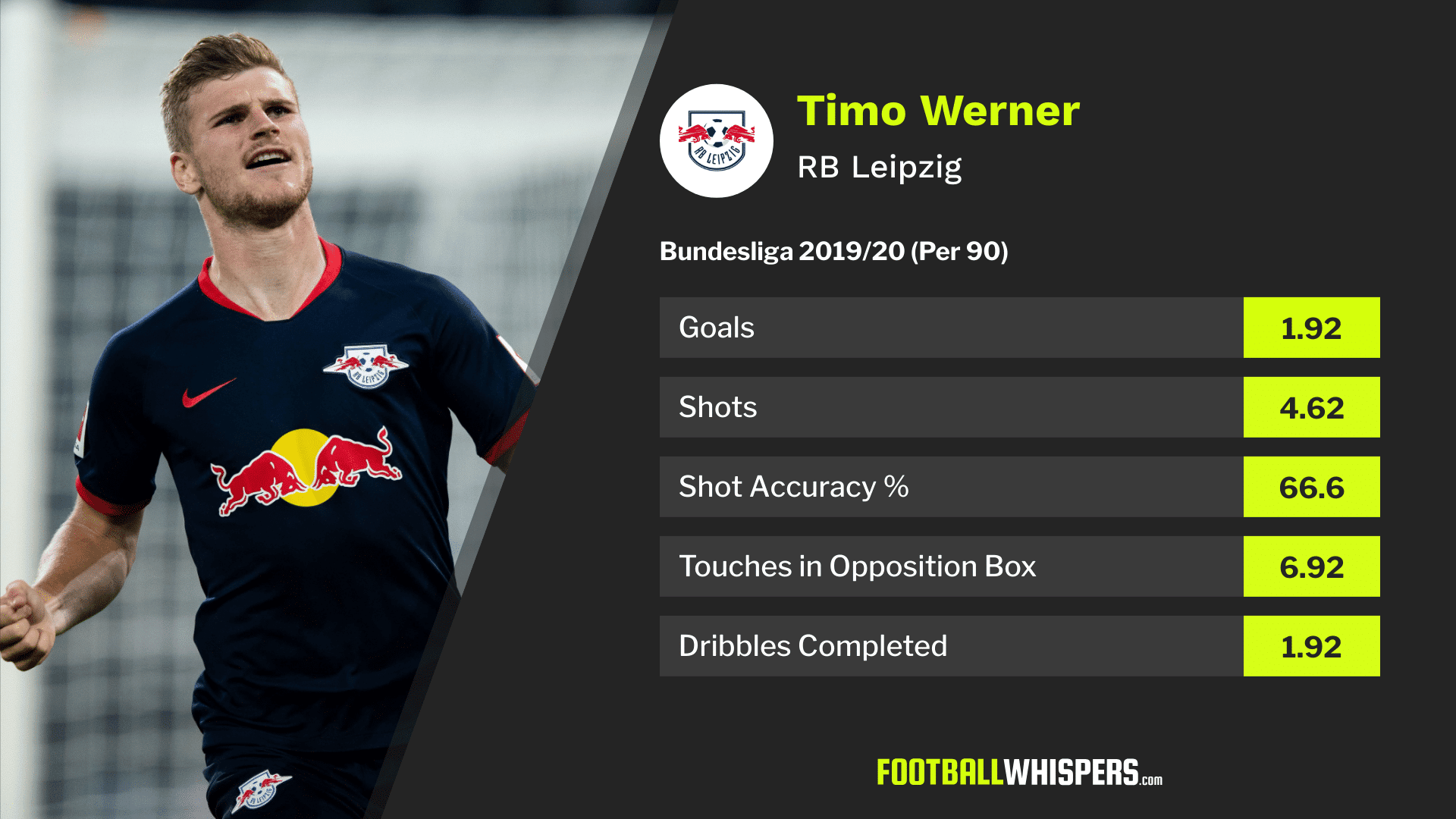 The treble took his tally to 55 Bundesliga goals since the start of the 2016/17 season with an expected goals total of 51.

Werner is a prolific but more importantly reliable goalscorer. And he is still only 23. In the current market, he’s worth his weight in gold.

Werner has always been a consistent threat. The sample size under Nagelsmann isn't the largest but there are signs to suggest this could be his most prolific campaign to date. 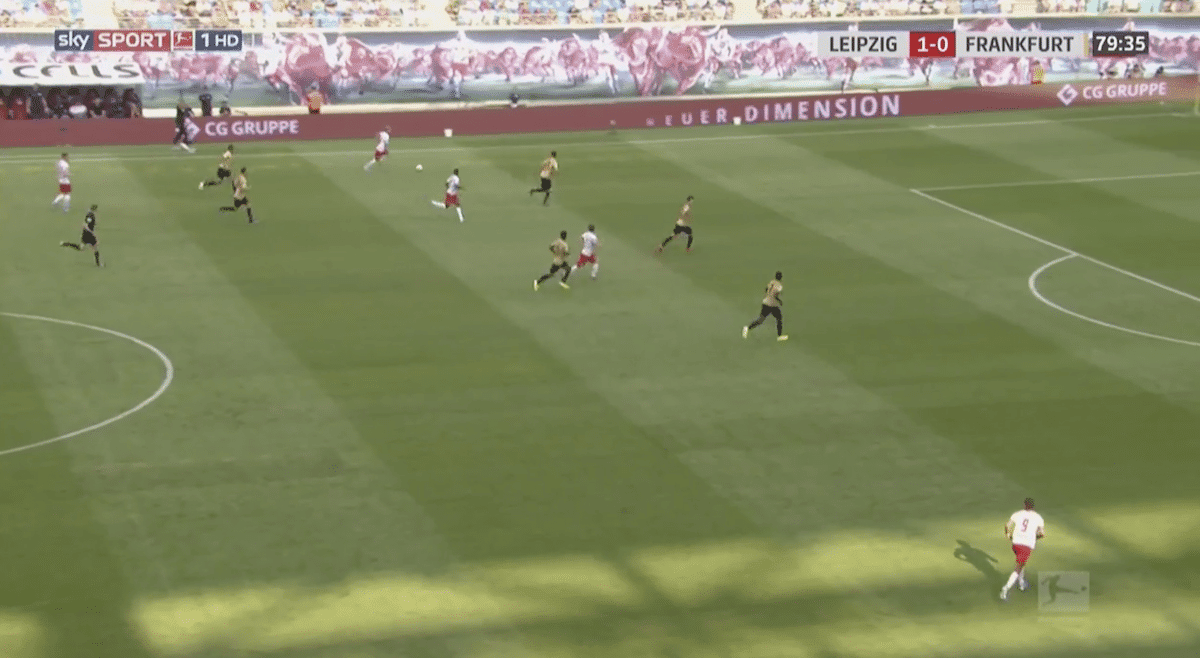 Nagelsmann's shape isn't as strict as others. In the still above, taken from the 2-1 win over Eintracht Frankfurt, you see Werner in possession on the left. On the right flank is centre-forward Yussuf Poulsen. Filling in centrally is Marcel Sabizter and Ademola Lookman.

With Werner able to roam and do what he's best at, he's more effective than ever before. For starters, he's completing more dribbles than he did last season; beating full-backs, creating space and then getting into the penalty area.

Furthermore, he's able to do this in either of the formations used by Nagelsmann. In the 3-4-3 shape, he teams up with Marcel Halstenberg on the left and creates overloads he can make the most of because of his explosive pace.

In a 4-4-2, used in the win over Gladbach, it morphs into a shape similar to Ralph Hasenhüttl's 4-2-2-2. In the win on Friday, Werner paired well with Emil Forsberg on the left. The duo combined to score the opener. 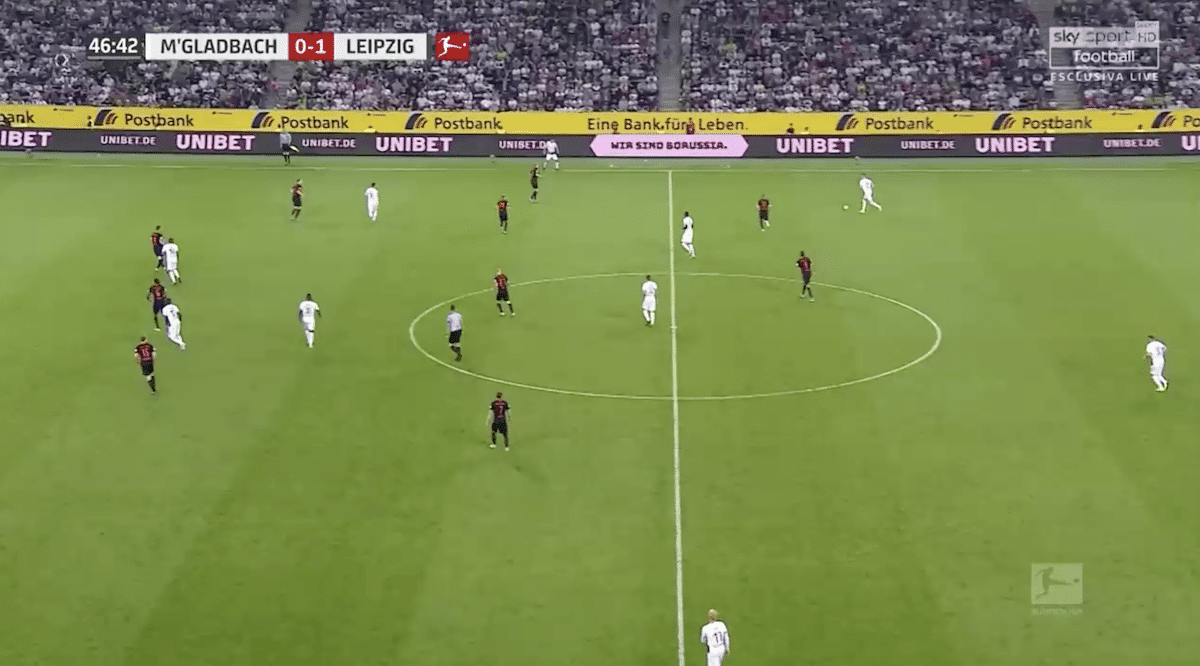 In both systems, Werner has support. It's in these situations that he's able to exploit the opposition.

People often claim the Germany international needs space to thrive in but the truth is he's at his very best when he's got support. With team-mates in his proximity, he's able to create moments and it's in these moments that he comes alive.

In the 3-4-3 he has Halstenberg, Poulsen and Sabitzer for company. In the 4-4-2 it's Poulsen, Halstenberg and Forsberg. These diamonds, or quartets, happen to be what Nagelsmann used to great effect while in charge of Hoffenheim.

The aim is to get plenty of bodies into certain areas so they're able to able to build attacks or create gegenpressing opportunities.

Werner thrives in the chaos of these situations. He's impossible to stop and if executed properly the style is difficult to smother. Nagelsmann's approach could unleash Werner 2.0 onto the world.