Rangers’ 4-1 defeat at the hands of Hearts all but ended their title dreams. Joking aside, the heavy defeat did round off a disappointing week for Mark Warburton’s men.

At one stage they looked to be favourites to land West Ham United centre-back Reece Oxford on loan, but the 18-year-old opted to join Championship side Reading. It meant other than the arrival of Raith Rovers’ 20-year-old centre-back David Bates the club didn’t bring in any defensive reinforcements in January. It’s an area of the team which needed drastic attention and the loss to Hearts showed exactly why.

This may seem extreme given Rangers don’t often get taken apart and have the third best defensive record in Scotland’s top flight. But there is a cheat code for the opposition which guarantees chances; just get crosses into the area. They’re like grenades going off in the penalty area and they just cause chaos. Hearts exploited this weakness in the 4-1 win and the 2-0 victory earlier on in the season. Rangers have also conceded goals from set pieces or crosses against Motherwell, RB Leipzig, Celtic and Aberdeen. 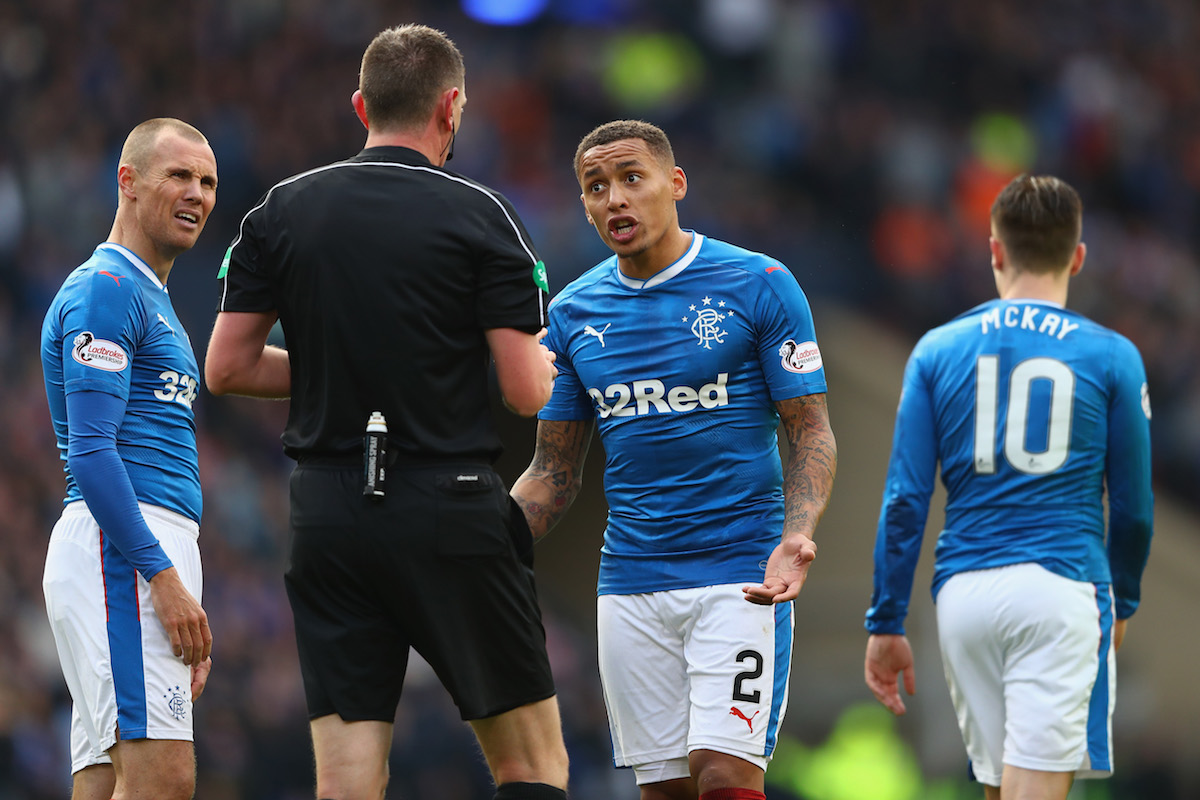 The Gers have hit some rocky form as of late and have won just two of their last six matches in all competitions and in two of those matches they’ve conceded four goals. Granted, one of these heavy defeats came at the hands of RB Leipzig who currently sit in second position in the Bundesliga but it was all too easy for Ralph Hasenhuttl’s men. At times it looked as though they just walked the ball into the back of the net.

Ian Cathro’s Hearts side made it look just as easy. 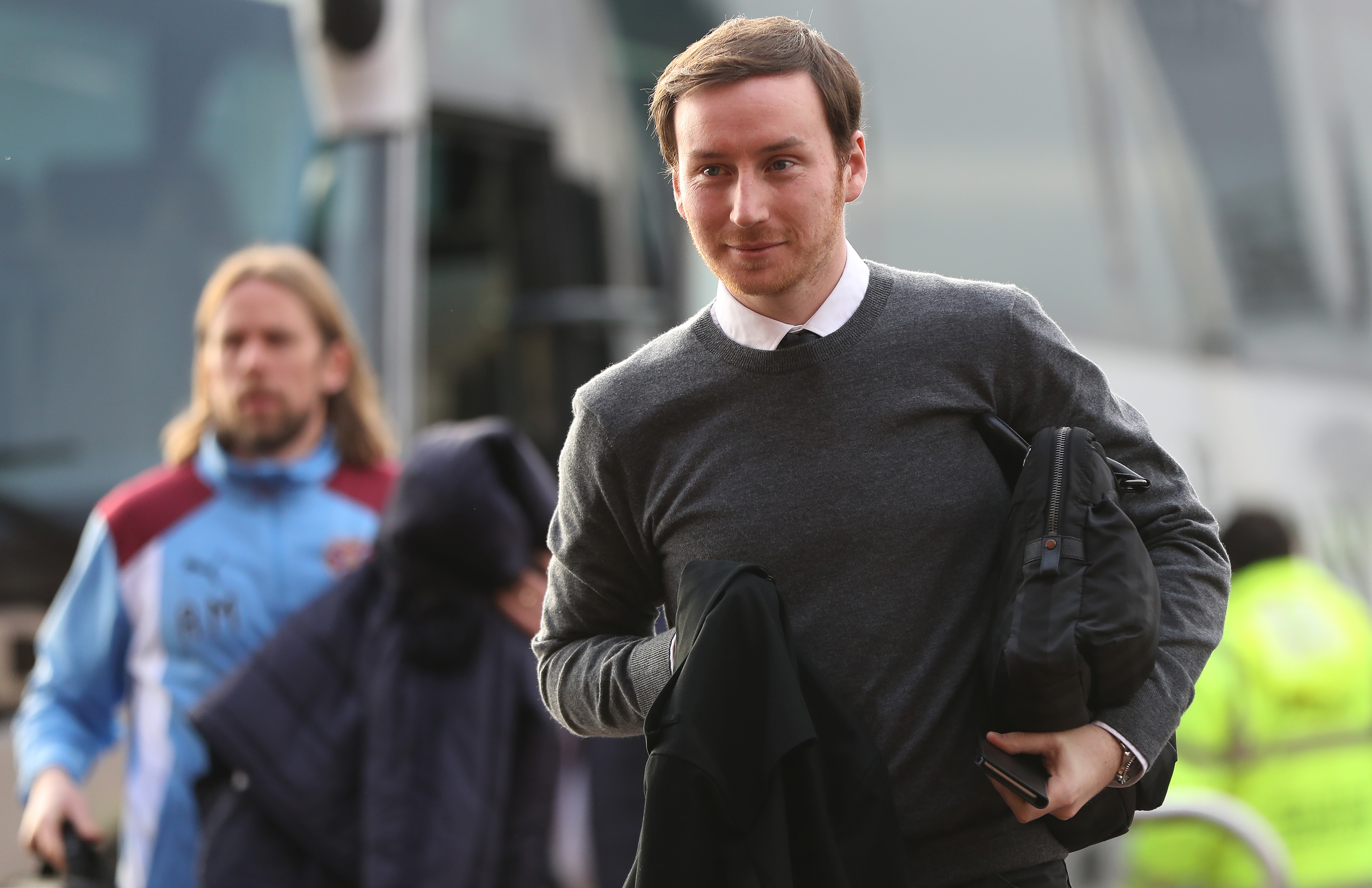 A Tactical Breakdown of Rangers’ Defeat to Hearts

– How the Hearts press nullified Rangers

Rangers like to play football. Warburton has seen a lot of praise come his way for this and it appears, with his team sitting in second position in the league, that it’s been successful for the club. Letting them set the tempo is a sure fire way of losing. You need to disrupt their play but to do that you need to be brave with the press because they will sometimes bypass it and you’ll be exposed but the reward outweighs the risk. As Hearts showed. 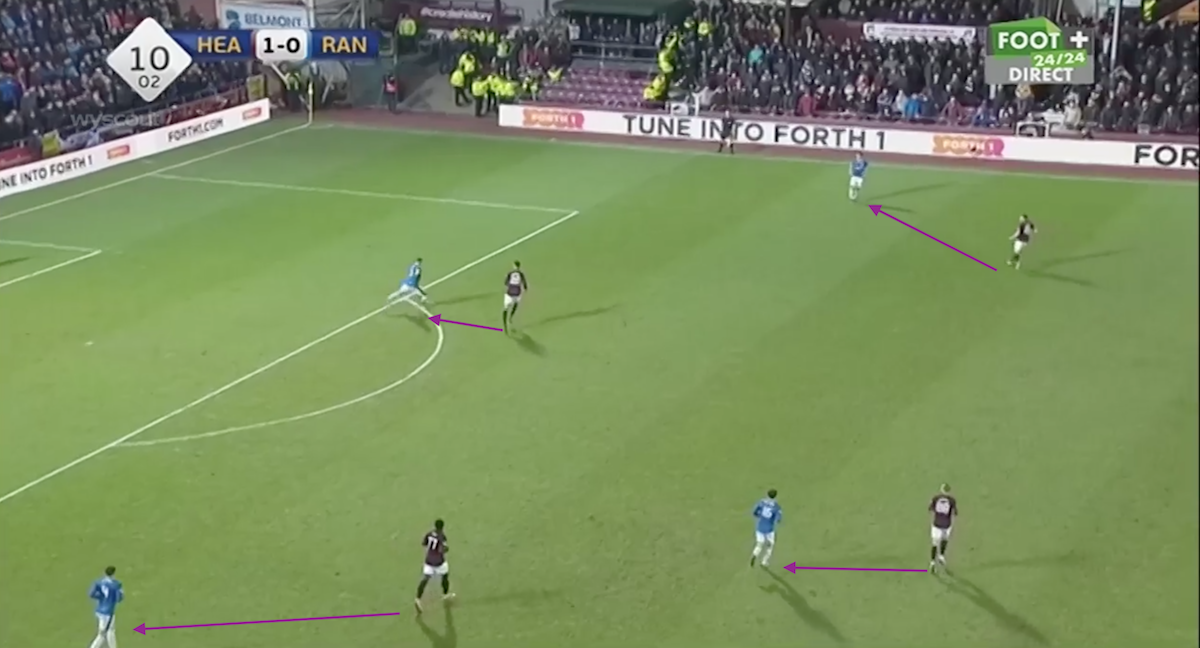 In the above picture you see Hearts going man for man in the Rangers half as the away side look to build from the back. There are no easy passes on and Hill is forced to play the ball long and out of play for a throw-in. Hearts have committed men and it’s a synchronized press purposely done to ensure Rangers aren’t able to build from the back. 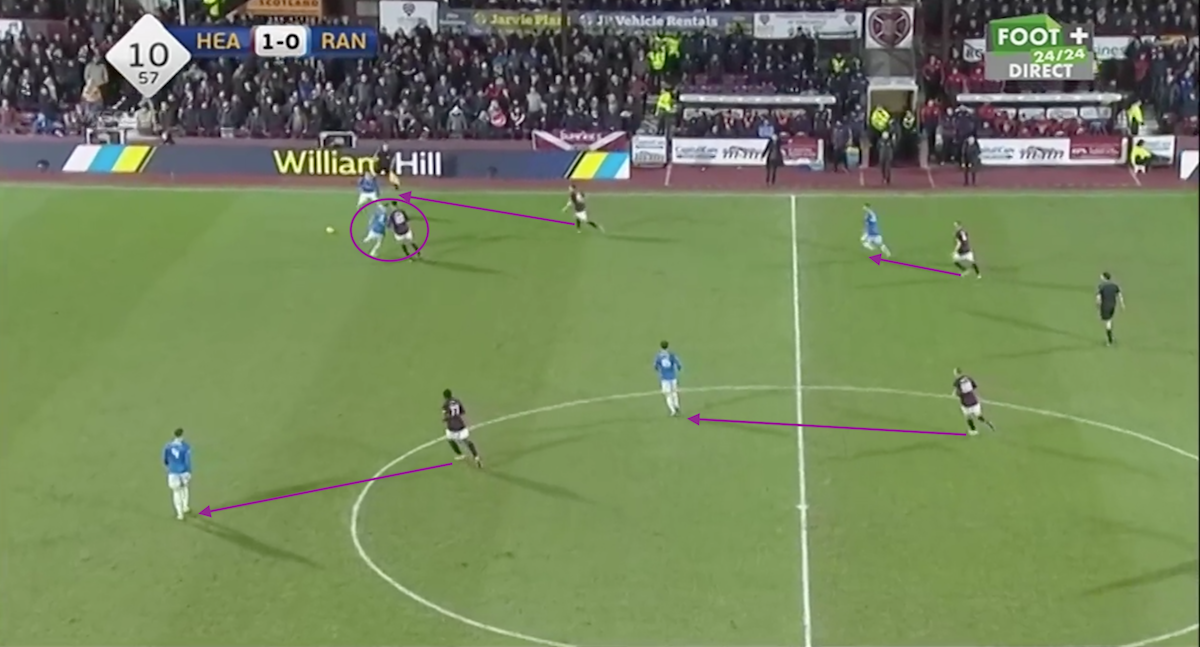 This time Hearts have five players pressing as they look to suffocate them of space and force them to go backwards. If the ball is played back to the ‘keeper it drags Rangers deeper as they look to start again and allows Hearts to get back into their shape. 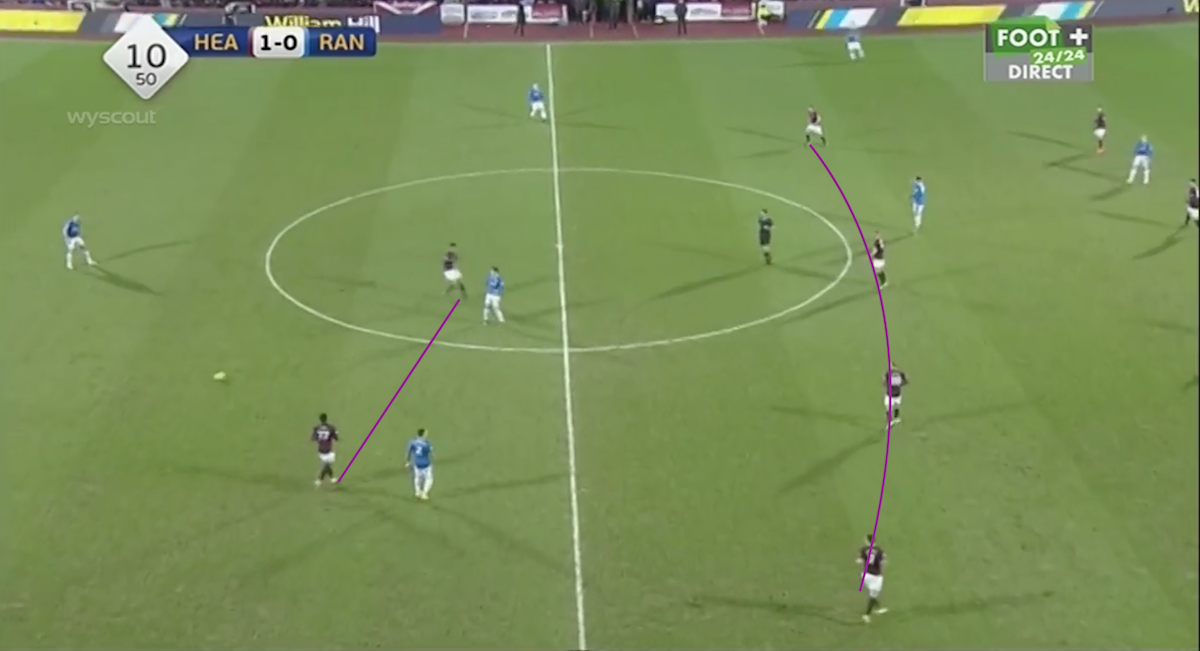 When Rangers did start again they had to play through three narrow lines if they wanted to get at the Hearts goal. In the picture above you see the off the ball shape. Hearts would sit off in their lines and each player had a specific area to patrol. As soon as a Rangers player entered it they’d break from the line and look to pressurise them in an attempt to force them backwards before dropping back into position. 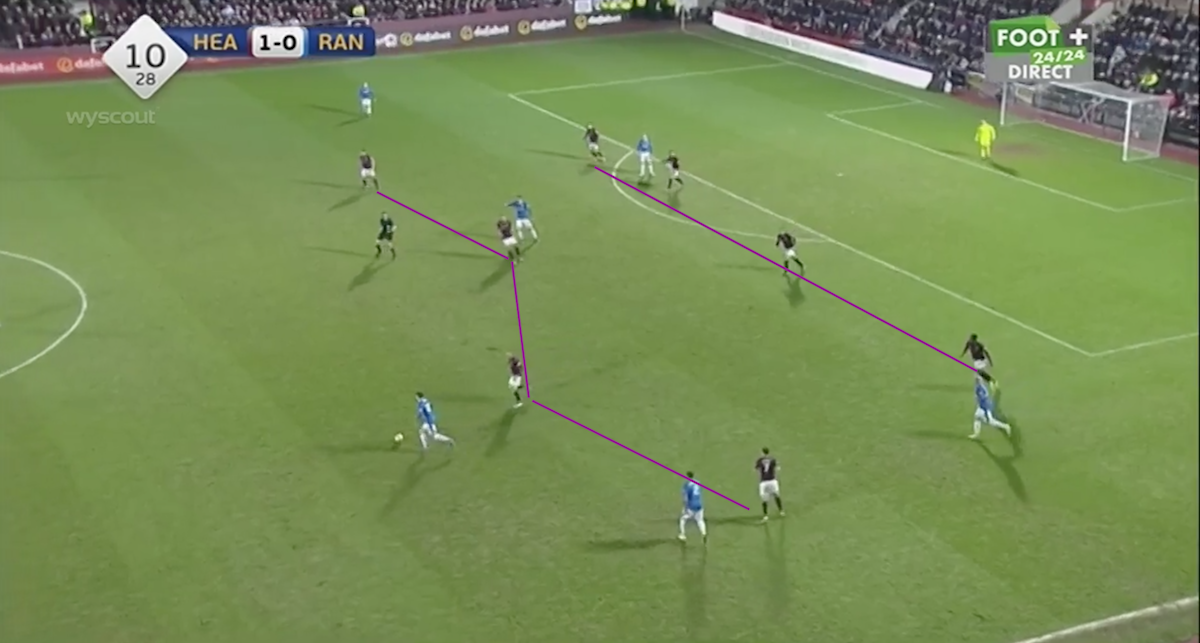 You see that tactic in the picture above. Rangers have carried the ball infield and the Hearts man has broke from the line so the man in possession isn’t able to have time on the ball to pick a forward pass. Then as the ball is played backwards the midfield shuffles forward and the defence follows. It was done as a unit so not to allow too much space between the lines for Rangers to play in. 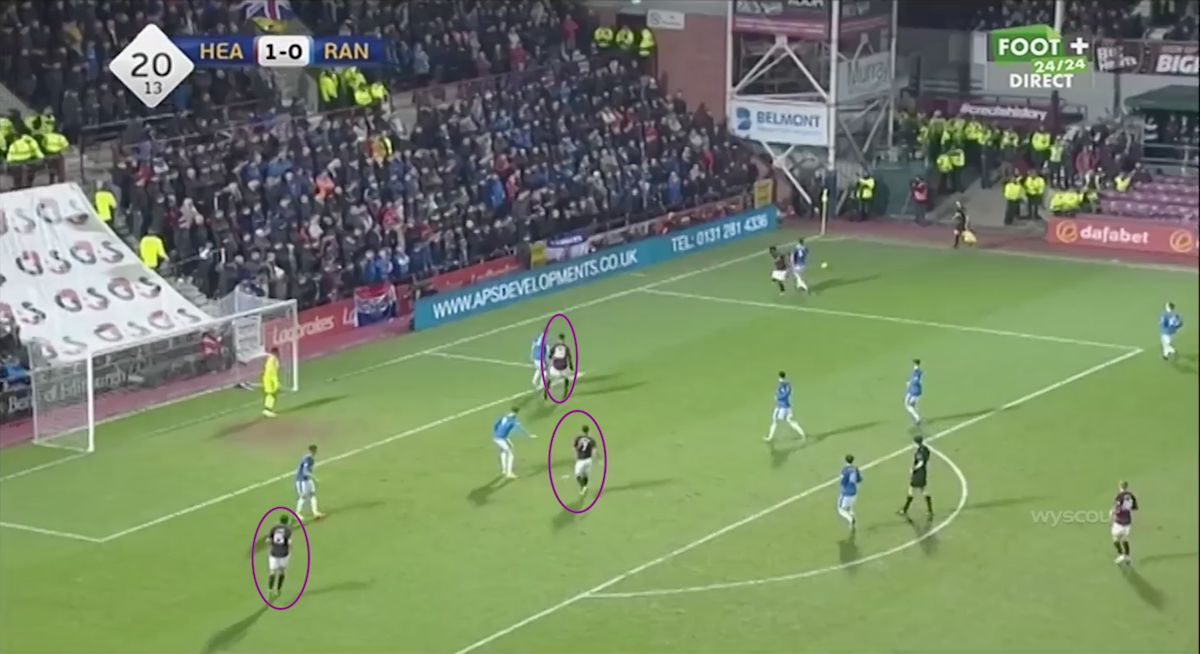 As mentioned previously, Rangers don't deal with crosses into the penalty area that well so putting pressure on them by getting men forward is one way in which you can exploit it. As you can see in the picture above Hearts weren't conservative in that respect. If the ball was worked wide they'd get men forward to support, and even get beyond, the strikers.

All four of the Hearts goals stemmed from a cross into the area but they were able to make the most of the chaos because they had players from deep supporting. 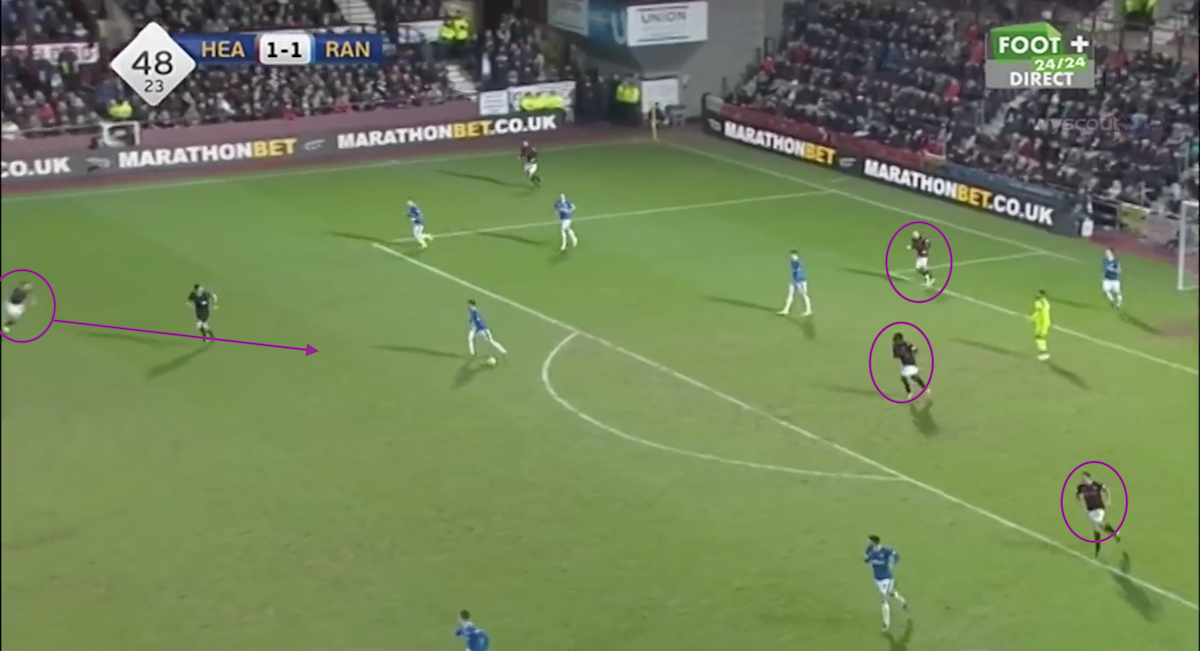 The picture above is moments before Hearts re-take the lead. The cross had been played in and the home side had committed three men into the area. Wesley Foderingham plucks it from the air and looks to get his side on the attack. He rolls the ball to Andy Halliday who inexplicably doesn't react fast enough and Walker rushes in to tackle him before firing home.

The fact Walker was in such an advanced position is because his side had been tasked with supporting the play. It's why they had five men in the Rangers final third for the attack.

A cross into the box followed up by a player pressing high up the pitch. It's like Hearts had an instruction manual on how to unsettle Rangers. It must feel like a bad case of deja-vu for fans of the Glasgow based team after seeing their side concede practically identical goals time and time again. Warburton will need to address this issue if he's to stop the opposition exploiting the glaring weaknesses but with the window now closed it's not going to be an easy task.

Make sure you catch Episode 10 of Football Whispers TV.