A big issue for football managers is the internet never forgets. Everything you say will be documented and with a quick search your beliefs, goals and admissions can be brought back for deconstruction and analysis.

Following Arsenal's 3-1 defeat away at Manchester City, and the way in which the Gunners were beaten, it made Arséne Wenger pre-match press conference comments even more interesting.

“You want to defend well but you cannot only be focused on defending. We want to play and have the ball and create dangerous situations. Sometimes the best way to defend is to attack.”

With injuries to Shkodran Mustafi and a doubt over the fitness of Sead Kolasinac, it was expected the Arsenal boss would return to a back four and move Nacho Monreal to left-back.

This was also the chance to unleash his front three on City. Apart from their opponents, not many teams have three forwards capable, on their day, of punishing anyone in the Premier League.

But returning to a back four and going to a 4-3-3 shape could have exposed Per Mertesacker’s lack of pace, so it gave Wenger a decision to make. And it's unlikely any Arsenal fan would have predicted what would come next.

Ruled out with an illness, the German defender wasn't an option and in came Francis Coquelin. Monreal and Kolasinac started and it looked as if the back four was in place.

Straight from kick-off, it was clear Wenger had stuck to his 3-4-2-1, but with Coquelin playing as the central defender, with the Spaniard and Laurent Koscielny either side.

During the pre-season tour and in the Europa League Wenger has toyed with the idea of playing Mohamed Elneny as a makeshift centre-back. Far from embarrassing himself, he took to the role with relative comfort and looked like an option if required.

Coquelin, meanwhile, is a destroyer, he makes tackles, gets involved and leaves the football to others. Playing in a back three, you need your central man to be calm and composed on the ball, able to pick a pass and the man to control and dictate play. That’s not the 26-year-old.

Putting him in the midfield could have matched up with City, giving Arsenal an extra body in the centre to close down the likes of Kevin De Bruyne and David Silva.

Coquelin finished the game with three tackles, one interception and one clearance. Numbers bettered by the other two defenders. He also didn’t commit a foul.

That's something you could commend him for, but he’s the exact type of player who should be putting his foot in, breaking up City’s attacks and acting as the rough and tough option in Arsenal’s team.

But he wasn’t, he was mostly a passenger. Even on the ball, Coquelin was poor. Twenty-three passes, 13 long balls and a pass completion of 65.2 per cent was what he achieved. Damningly Petr Cech had a better numbers.

Watching youth football in France, you see a very interesting trait. Many centre-backs are defensive midfielders and vice-versa. You need to be able to play both roles.

Playing 4-2-3-1, the full-backs are allowed to attack at will, so then, the centre-backs push wide and the deepest midfielder tucks back to make a three.

Almost every youth team player in France plays this style, it’s important to the culture and style of how they develop.

Coquelin, however, has never played in this role, you can tell from the way he passes the ball and his style as a midfielder. It’s not part of his DNA.

Wenger should know this more than most and he was asked about his decision after the 3-1 defeat.

“I can explain to you that Mertesacker came into training yesterday morning, sick. That [Rob] Holding had a thigh strain. That [Mathieu] Debuchy had just come back from [being] a long-time absentee.

“That I don’t see that big a problem to play in the middle of the [central defensive] two. You’re a defensive midfielder or a defender, it’s the same. I don’t think that was a problem in our game.”

Taking Coquelin away from his actual position, playing him in the defence and sticking the 3-4-2-1 was another bizarre move from Wenger.

Elneny was on the bench and if you are ultimately going to take a risk pushing someone out of comfort zone, why not make it a player who you’ve already tried in that role? That’s one huge mystery of Wenger’s set-up, but there was another.

On Friday Wenger said he would attack City, but on Sunday, he dropped the club’s record transfer and most clinical forward to the bench.

Alexandre Lacazette manages to get more of his shots on target than both Alexis Sánchez and Mesut Özil and the former Lyon man will wonder why he was bought if not for these big-time games.

He also missed out on Liverpool away, another game Arsenal lost and another strange decision from Wenger. Alex Iwobi played on the left, the German playmaker on the right and Alexis up top. 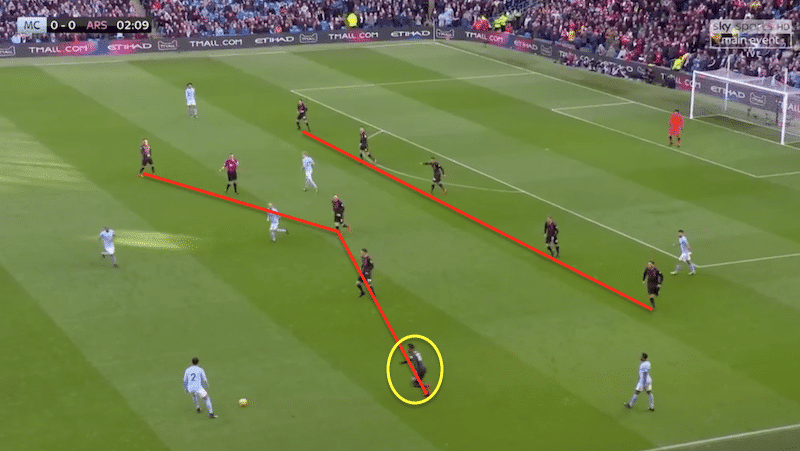 The Nigerian (yellow) was picked for his size and mobility and was asked to play wide and chase the ball.

Iwobi finished with no tackles, no interceptions and no clearances, making it unclear what he was there to do and why he was starting instead of Lacazette.

No one is going to work harder to chase defenders down than Sánchez – his energy is perfect for that role – but that should leave the Frenchman to play through the middle, especially as no one is better than Lacazette at finishing when chances are at a premium. 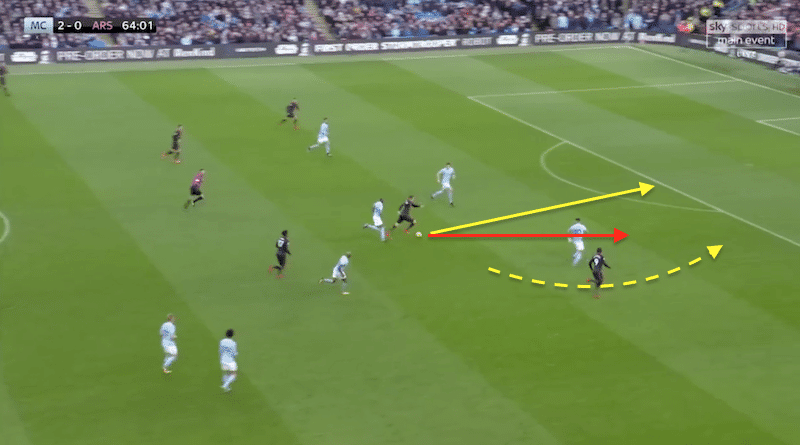 The 26-year-old scored with his only shot of the game, and displayed his excellent movement off the ball, peeling off the back of Nicolás Otamendi, create some space and delivered with the low finish.

If Wenger was true to his word and really did want to try to attack the City defence, you play your best trio.

Put Coquelin in the midfield, close down space and give the attackers the ball and hand them more opportunities to test the back line.

With his selection, and the formation he choose, Wenger set Arsenal up to fail. There’s no way around it. You can respect what the Frenchman has done in his career but you can’t defend his recent actions.

After the international break, the Gunners take on Spurs on their biggest match of the season. That gives the 68-year-old over a week to learn from his mistakes and find the guts to take a chance in the North London derby; the risks that will hand them the opportunity to gain huge rewards.

The biggest question before they meet, though, is does Wenger still have it in him to both acknowledge his mistakes and back up his words with actions?