It was a weekend to forget for Mauricio Pochettino as his Spurs side failed to capitalise on a wounded Chelsea to inflict a second successive Premier League defeat on the current champions.

Antonio Conte surprised many with his use of David Luiz. The Brazilian, who usually plays in the centre of a back three was pushed into a defensive midfield role as Chelsea stifled Spurs at Wembley.

Luiz won five tackles in the second half; more than Victor Wanyama, Mousa Dembélé, Moussa Sissoko, Dele Alli and Eric Dier combined (4), although that was also a sign of Spurs' dominance in possession. Regardless, it was a shrewd move by Conte to shift Luiz into midfield.

The home side again failed to win at their temporary home and Harry Kane is still goalless in August. The Spurs striker had eight shots against the champions; the most he has recorded in a single Premier League match without scoring.

The striker has also had the most shots in the Premier League this season (14) but has failed to get off the mark just yet.

When Kane isn’t finding the back of the net the goals aren’t flowing for Spurs, especially at Wembley. They carved out chances, with the 24-year-old striker hitting the post with a curled effort, but they needed an own goal to finally break Chelsea's resolve.

It was a familiar story for Spurs who have hit the woodwork 24 times in the Premier League since the start of last season; more than any other team.

5 – Tottenham's all-time top scorer in games at Wembley is own goals, with Michy Batshuayi's being the fifth netted in favour of them. Oops.

Conte also broke a habit during the win for Chelsea, it was also the first time in 50 games that the Italian didn't use all three of his substitutes. Perhaps that's down to his squad being a little thin these days?

However, one of the subs he did bring on was Pedro. The Spaniard completed just one pass against Spurs but it just so happened to be the assist for the Marcos Alonso winner.  The left wing-back (7) now has more goals than Diego Costa (6) in 2017.

Spurs ‘keeper Hugo Lloris didn't have much to do but failed to save a shot on target.

The Terriers hosted their first match at the John Smith's Stadium in the Premier League and ran out as 1-0 victors. It wasn't as pretty or as emphatic as their opening day win over Crystal Palace but David Wagner's men did enough to inflict a second consecutive defeat on Rafael Benítez's side.

Aaron Mooy was the match winner. His superb curled effort featured the most passes in the build-up to any goal scored in the 2017/18 season so far. Huddersfield strung together 14 passes before the Australian left Newcastle United goalkeeper Rob Elliot grasping at thin air.

The goal also brought Huddersfield's drought at home to an end. Including the play-offs, Wagner's team went 320 minutes without a goal in front of their own fans. Will the floodgates now open for new signing Steve Mounié and co?

Newcastle signed Mikel Merino in the summer on loan from Borussia Dortmund. He made his first start for the Magpies against Huddersfield in place of the suspended Jonjo Shelvey. He looked bright in the early stages but the away side couldn't get a foothold in the game and completed just 12 passes in the opening 20 minutes.

Not the debut the pass master general was hoping for.

Newcastle were unable to build play through their middle third and this left Dwight Gayle isolated. The striker managed to complete just three passes in the first half, none of which were in the final third.

The Gunners followed up their extraordinary 4-3 win over Leicester City last weekend with a 1-0 defeat to Stoke City. Arsène Wenger's men dominated the game and had 77.3 per cent possession, their highest possession figure in a single match since 2003/04 season.

But they couldn't do anything with the ball and Jesé's goal on his debut was enough to see Mark Hughes' team pocket all three points.

The former Real Madrid man is only the third Stoke player to score on their Premier League debut. Following in the footsteps of Ricardo Fuller and Michael Kightly.

Mané the man for Liverpool

5 – Sadio Mane has had a hand in five goals in six Premier League games vs Crystal Palace (four goals, one assist). Thorn.

Water is wet and Sadio Mané was the match winner for Liverpool this weekend. It's becoming quite the norm now and there's an argument to be made that the former Southampton man is the most important player for Jürgen Klopp's men.

He's netted the opener for the Reds in both Premier League matches this season but seeing Mané influence proceedings against Crystal Palace was a given. The Senegalese speedster torments the Eagles on a regular basis.

Mané wasn't the only one to impress for Liverpool. Andrew Robertson, on his league debut for the club, created three chances; more than any other Liverpool player in action. On another day he walks away with two assists.

And James Milner was the only player in the Premier League to complete 100 passes. It's clear that he's enjoying his time back being in a midfield role once again.

First time in 110 years for United 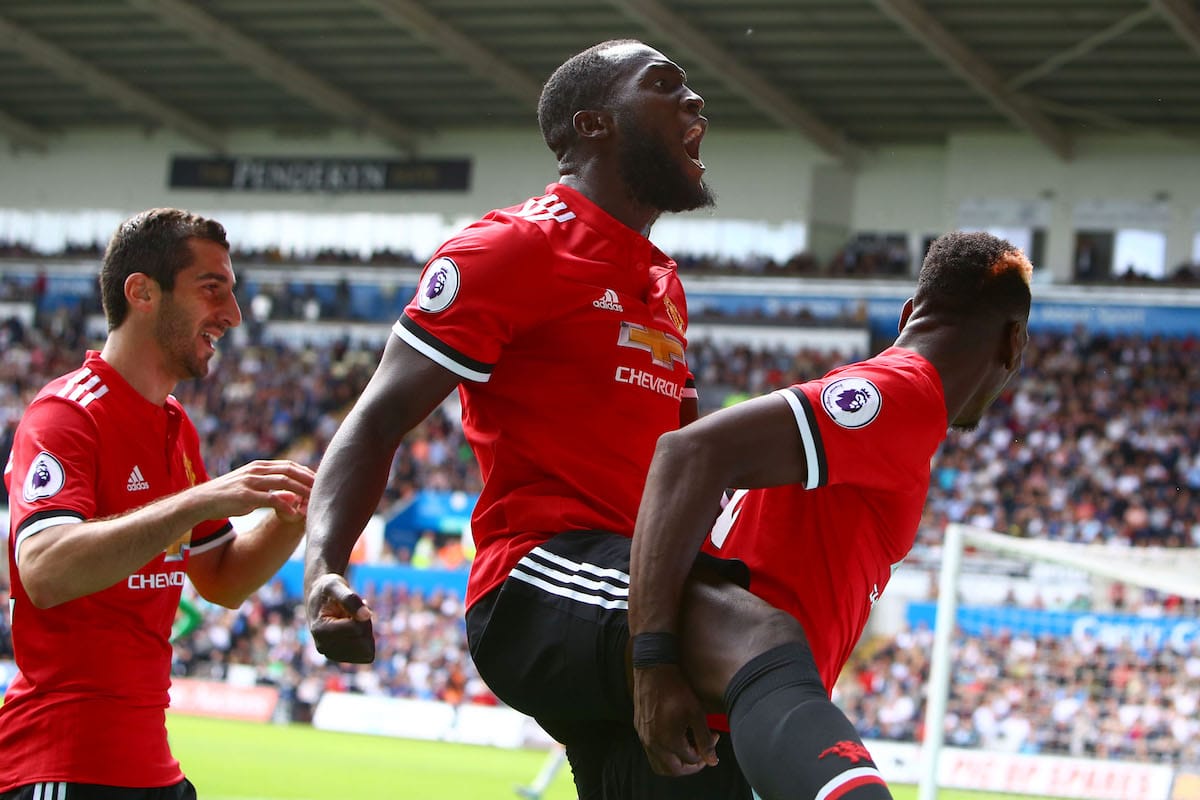 The arrivals of Romelu Lukaku have sparked the Manchester United attack into life.

Last season Zlatan Ibrahimovic carried José Mourinho's side at times. They were reliant on the Swede to score the goals and it resulted in them scoring fewer home goals than Bournemouth during the 2016/17 season.

The two new signings have awoken the United attack from their slumber. It's the first time since the 1907-08 that they have scored four or more goals in their opening two league games of a season.

Lukaku became only the fifth United player to score in his first two Premier League appearances for the club at the weekend against Swansea City. Ibrahimovic, Anthony Martial, Federico Macheda and Louis Saha all managed the feat before the Belgian. He's already paying back that £75million transfer fee.

Just 221 seconds separated the second, third and fourth goals for the Red Devils. Swansea were shellshocked.

Javier Hernández marks his return to the Premier League in style

Hernández netted twice as West Ham came from two goals down to level it up against Southampton. But a Pablo Zabaleta push in added time gave the Saints the opportunity to pick up all three points. Charlie Austin didn't pass up the chance to do just that.

It's now two defeats from two for Slaven Bilic and his team.

However, those two goals ensured ‘Chicarito' kept up his 100 per cent record of every goal he's scored in the Premier League coming from inside the penalty area. He's a real fox in the box and his goals could be key in ensuring the Hammers don't find themselves in a relegation scrap.

Joe Hart, however, is having a start to forget at West Ham. He's now conceded seven goals in his first two matches for the club and has conceded 17 goals from the last 27 shots he's faced.