In doing so the Argentine took his tally for the season to eight in just nine appearances for City. Incredibly, it was the 29-year-old's first outing since being ruled out with broken ribs following car accident in Amsterdam three weeks ago.

Across the city there was frustration for José Mourinho and Manchester United who were beaten 2-1 at Premier League new-boys Huddersfield Town.

In the day's early game, champions Chelsea were well below-par but still came from behind to beat plucky Watford 4-2 late on with a pair of goals from substitute Michy Batshuayi.

Sunday was every bit as thrilling with Everton thrashed 5-2 by Arsenal to ramp up the pressure on Ronald Koeman before Tottenham crushed Liverpool 4-1 at Wembley in the final fixture of the weekend.

Here are the best of the facts and stats you might have missed from the weekend's action.

The Hornets must be sick of the sight of Batshuayi. Leading 2-1 when the Belgian forward was introduced for the ineffectual Álvaro Morata, the former West Ham transfer target turned the game on its head. And not for the first time.

Last season the former Marseille forward scored home and away against Watford and he followed those strikes up with a brace at Stamford Bridge on Saturday. That means he has now scored seven Premier League goals in just 421 minutes of action since joining Antonio Conte's side last summer – a goal every 60.1 minutes.

While Batshuayi proved the hero at full time, it was Pedro who got the Blues up-and-running with splendid curling opener which Heurelho Gomes could do nothing about. That was Chelsea's 8,000th goal in all competitions.

It was the ex-Barcelona forward's 12th strike of 2017 and with a further nine assists, no-one has been involved in more goals for the Blues this calendar year.

Watford's equaliser was scored by the hugely impressive Abdoulaye Doucouré – the Frenchman's fourth goal of the season from as many shots on target this term. Incredible efficiency.

Victory over Mourinho's men at the John Smith's Stadium on Saturday was the Terriers' first in the league since 1952.

Mind you, once Aaron Mooy and Laurent Depoitre had scored within five minutes of one another to give Huddersfield 2-0 first-half lead, the outcome was inevitable.

That's because Mourinho has never won a Premier League fixture in which his side have gone two down. In fact, he has only clawed back a point on one of those 19 occasions – with Chelsea against Newcastle in 2015;.

Christopher Schindler (14) & Mathias Jørgensen (14) made more clearances (28) than 6 of the 12 Premier League teams in action today.

The scorer of the opening goal, former Manchester City midfielder Mooy, has now played a part in ten league goals for Huddersfield this year (four goals, six assists) – four more than any of his team-mates.

Marcus Rashford did give United a glimmer of hope by scoring his 13th Premier League goal for the club with 12 minutes remaining. He is now only behind Wayne Rooney (15) for top-flight goals by a teenager for United after moving ahead of Ryan Giggs (12).

17 – Romelu Lukaku has failed to score in 17 of his last 24 Premier League games against newly-promoted teams. Unexpected. pic.twitter.com/aXdbdCXX5l

The headlines will go to Agüero who is now one goal away from being the club's all-time record goalscorer. But Kevin De Bruyne was, once again, pivotal as City overcame the plucky Clarets at the Etihad Stadium.

By supplying the assist for Sané's goal, City's third, the brilliant Belgian moved level with Barcelona great Leo Messi on 69 assists since the start of the 2012/13 campaign.

Man City have 4 players with 10+ goals + assists across all competitions this season:

As a team City now have 32 Premier League goals after nine games and are the second team to break the 30-goal barrier at this stage. The other? Manchester City's class of 2011/12. Remarkably that means Guardiola's side have now scored more goals this season than they managed in the entire 2006/07 season.

With the forwards grabbing all the plaudits, the unsung hero for the hosts was goalkeeper Ederson. The Brazilian stopper completed more passes than any Burnley player on the pitch with 22.

Fresh from their shock 2-1 win at Chelsea a week ago, bottom side Crystal Palace were always going to be dangerous opponents for Newcastle and it took until Mikel Merino's 86th-minute header to settle the tie in the Magpies' favour.

The win extends a proud, if not slightly obscure, record for United boss Rafael Benítez who is now unbeaten in 21 home games against former England managers, winning 17 and drawing four.

The statistics do not make such good reading for Crystal Palace, though. The Eagles have now failed to score in seven consecutive away games – the worst run in the top division of English football.

Furthermore, Palace did not get a shot on target in the game for the second time since Hodgson replaced the hapless Frank de Boer. Without Christian Benteke through injury once more, Hodgson paired wingers Andros Townsend and Wilfried Zaha up front. But they did most of their work outside the box as shown below. 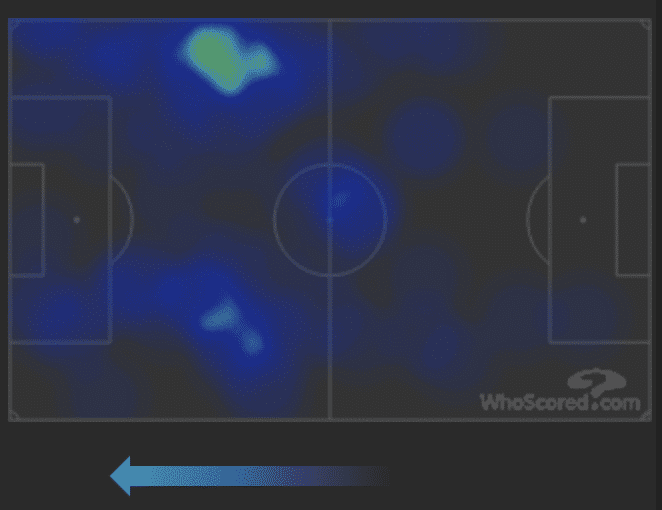 Two goals in as many minutes from Andrew Surman and Junior Stanislas got Bournemouth their first away win since beating Sunderland at the Stadium of Light in April.

And Surman, who opened the scoring after 16 minutes, was back among the goals with his second of the season having scored in the win over Brighton in September. It had taken the former Southampton midfielder 81 games to net that many previously.

On the subject of players who have recently discovered their goalscoring boots, Stoke's goal came through Manchester United flop Mame Biram Diouf. It was his third league goal this season, a marked improvement on the solitary strike he mustered in 27 outings last term.

Without a win in six Premier League fixtures, Leicester decided to part company with manager Shakespeare in the week, four months after he was appointed as Ranieri's permanent successor.

And with former Oxford United boss Michael Appleton in the dugout the Foxes picked up a much-needed win at struggling Swansea who were clearly in charitable mood.

Leicester's opener was an own goal from Federico Fernández who scored his third OG since the start of last season – level with former Swan Jack Cork for the most in that time.

But it's not just a problem for the Spaniard. The whole of the Swansea side have been at it, putting past their own keeper 11 times since the start of last season – more than any other team.

5 – Shinji Okazaki has scored five goals in his last nine PL games, as many as he managed in his previous 51 in the competition. Turnaround. pic.twitter.com/NxVhUNrAyR

Riyhad Mahrez assisted Shinji Okazaki‘s clincher for the visitors and the Algerian clearly enjoys playing against Swansea. The former Arsenal transfer target has now been involved in five goals (scoring four and assisting one) against the Welsh outfit.

Alfie Mawson has now scored 5 Premier League goals in 2017; Marcos Alonso is the only defender with more (7).

Sofiane Boufal's individual Goal of the Season contender, slaloming past five Baggies players, settled an otherwise forgettable clash at St Mary's and gave Southampton just their third win of the season and their first victory in four.

No player completed more take-ons (4) than Sofiane Boufal during Southampton vs. West Brom.

He came on in the 81st minute. ? pic.twitter.com/FMqXtd0DSi

West Brom have not won away from the Hawthorns since a 1-0 triumph at Burnley on the second weekend of the season and they have scored just three times on their travels this season.

The Gunners got back to winning ways after being humbled at Watford last weekend, putting five past ten-man Everton to pile further pressure on Toffees manager Ronald Koeman.

With Mesut Özil, Alexandre Lacazette and Manchester City transfer target Alexis Sánchez included together from the start for the first time, the Gunners were irresistible at times.

43 – Mesut Özil also has more assists than any other player in the @PremierLeague since his debut in September 2013. Vision. #EVEARS https://t.co/ncVxbBQWVW

Özil alone created eight chances for his team-mates, more than any other player in a single league game this term, and his headed goal means the Gunners have scored more headers (78) than any Premier League since since the start of the 2011/12 season.

Wayne Rooney got the Toffees' opener, his 11th against Arsenal, meaning he has now scored more against the north Londoners than any other side.

Any misconceptions about a Wembley curse were well and truly put to bed as Spurs crushed hapless Liverpool under the arch. Moreover, it was Mauricio Pochettino's first win over the Reds as Spurs boss meaning he has now beaten every side he's faced in the top flight.

Harry Kane scored twice, his first two Premier League goals at Tottenham's temporary home and, remarkably, it took him until his 29th shot to get off the mark at Wembley.

By opening the scoring after four minutes, Kane netted his 44th goal of 2017 for club and country meaning he's now found the back of the net more times this year than any other Premier League player. Goal number 45 arrived after the break.

From Liverpool's point of view the stats make grim reading. Goalkeeper Simon Mignolet has now made 13 errors leading to goals since joining the Reds – three more than anyone else. Meanwhile, the four defensive errors made by Dejan Lovren this season and last are more than anyone else at Anfield.