Watford vs Norwich has taken on even more significance following both team's results last time out. The pair are separated by just 1pt heading into their Premier League clash on Friday and a win for the Canaries would see Watford drop into the relegation zone.

We're backing both teams to score in this game as Watford and Norwich have very poor defensive records this season and find it very hard to keep clean sheets. Both teams have scored in three of the last six league meetings between these two clubs and five of Watford's last six outings in league and cup have also ended with both teams getting on the scoreboard. Neither of these two teams have kept a single clean sheet in their last six attempts.

As well as both teams scoring in this game, we're also backing the pair to produce over 2.5 goals. At least three goals have been scored in three of the last six encounters between the two clubs, including this season's reverse fixture at Carrow Road. Four of Watford's and three of Norwich's last six fixtures in all competitions have witnessed at least three goals scored, so you can see why backing goals on Friday.

Key Stats and Figures for Watford vs Norwich

Watford missed out on a big chance to secure an important 3pts against one of their relegation rivals, Newcastle, last time out. However, after going a goal down early in the second half, the Hornets were delighted to see Pedro equalise 3-minutes from time to add another point to their tally. Friday's game against Norwich is another relegation 6-pointer that Watford will feel they need to win, especially as a defeat would see them drop into the bottom three.

Norwich played host to Everton last time out and the Canaries were singing come the final whistle. Everton started the game really poorly, conceding an own goal via Michael Keane in the 16th-minute and just 2-minutes later Idah doubled the home side's advantage with his first Premier League goal. The Toffees pulled a goal back in the second half but never looked like going on to find an equaliser, so the scoreline finished 2-1 and it ended up being Rafa Benitez's last game in charge. Norwich have put themselves into a great position to beat the drop with that result but really need to build on that game with another 3pts against Watford. 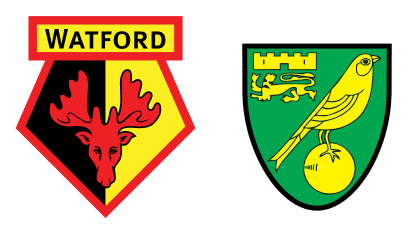