Another interesting matchup in the next round of EFL Cup is the Watford vs MK Dons duel scheduled for Tuesday, August 23rd. With that in mind, we have prepared a detailed preview of this game for you, along with some free predictions.

Our top Watford vs MK Dons betting predictions and tips

If you are looking for help to find the best bet for the Watford vs MK Dons duel, you have come to the right place:

This can be a very interesting match, although it's still pretty understandable why Watford is the favourite to win. The team started the new season in Championship well, with two wins and three draws.

Meanwhile, MK Dons only collected four points from the first five rounds of the new League One season. So, while the guests have the quality to put up a fight here, they don't' seem to be in good enough form to pose a serious threat and we expect Watford to win the game.

All five matches in Championship that Watford played this season have gone under 2.5 total goals and the team averaged a mere 1.20 goals per game so far in the league.

In order to learn more about this game, we will now take a better look at both teams ahead of their upcoming duel:

After the disappointing last season in which they were relegated from Premier League, Watford had a good start to the new season in the second rank of English football. After the first five rounds, they are second in the standings with two wins and three draws. Clearly, the teams' ambitions of returning to Premier League are pretty evident.

Meanwhile, Tom Cleverly, Samuel Kalu, and Tom Dele-Bashiru are all out with injuries, while Ismaila Sarr will likely miss the game as well since he was on the team's injury list over the weekend.

With two wins, one draw, and two losses in the first five games of the new season, Cambridge is currently in the tenth place in League One standings with seven points. That is a solid start for the team, whose ambitions are pretty much ending the season in the middle of the table in the third rank of English football.

When it comes to team news, MK Dons are without Tennal Watson, Mo Elsa, and Josh McEachran, while Will Grigg and Nathan Holland are also on the team's injury list and questionable for this game.

The latest odds and key stats for Watford vs MK Dons

If you don't want to spend time looking for the best Watford vs MK Dons odds, check them all out right here on our site: 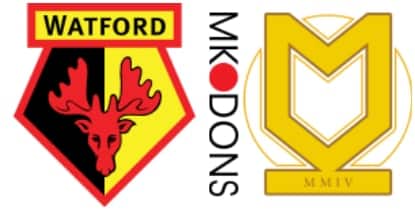