Watford play host to Man Utd in the Premier League this weekend and both teams will be hoping to get back to winning ways on Saturday. This feels like a game that Man Utd and Solskjaer can't afford to lose, while Watford won't be expected to win and that takes some of the pressure off the home side.

Our Top Tips for Watford vs Man Utd

Here are our predictions for Watford vs Man Utd.

Man Utd have won five of their last six encounters with Watford and have kept clean sheets in three of those victories. Watford have lost four of their last five league games and have failed to score in each of those defeats, while Man Utd won their last away game against Tottenham comfortably.

In terms of a final scoreline, we're backing a narrow 1-0 win for the visitors. Man Utd haven't been in the best of form lately but they do have the far better squad, even with a few key players out injured. We expect this game to be close just as it was when these two sides last met and United won 1-0 on that occasion. Three of Watford's last four defeats have been via a 1-0 scoreline which only adds further weight to our prediction for Saturday's clash.

Man Utd looking to bounce back after defeat in the derby

Watford made the short trip to Arsenal before the international break where a solitary second-half strike from Smith Rowe proved enough for the Gunners to win the game. To add insult to injury, Watford midfielder, Kucka, was sent-off for a second bookable offence in the 89th-minute and will now miss this weekend's game against Man Utd.

Man Utd had the home advantage against local-rivals Man City last time out but failed to make it count. An own goal from Bailly early on handed Man City the lead and on the stroke of half-time Bernardo Silva made it 2-0 and effectively sealed the victory for the visitors. The pressure is certainly mounting on Solskjaer now as other managers continue to get linked with the United job, so a win this weekend is just what he and the club needs to get back on track. 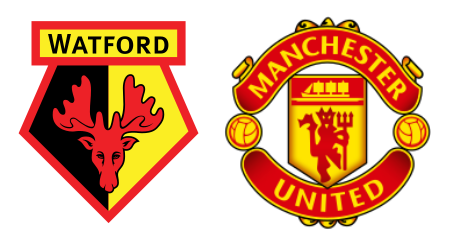