Watford vs Brighton: Our Top Predictions

Watford need to make the most of their home advantage this weekend when they play host to Brighton in the Premier League. The hosts sit second from bottom and haven't won any of their last six matches in all competitions but the Seagulls are going through a winless run of their own right now, so this should be a close and competitive game.

We're backing these two teams to cancel one another out on Saturday. Watford have drawn two of their last four outings in the Premier League and are in the midst of a winless run, while Brighton are the draw specialists this season with each of their last three league games ending in 1-1 draws.

There is a good chance that the number of goals in Saturday's clash will be limited as under 2.5 have been scored in six of the last seven meetings between the two clubs. Under 2.5 goals were also produced in four of Watford's last six matches as well as in three of Brighton's last four outings, so you can see why we're not expecting a goal-fest this weekend.

All the stats and the latest odds for Watford vs Brighton

Brighton looking for a return to winning ways against struggling Watford

In midweek, Watford made the trip to West Ham and put in a decent performance only to end up losing the game 1-0. Bowen scored the only goal of the game in the 68th-minute but there were some positives for the Hornets to take from the game. Watford simply have to start winning more games at home starting this weekend but Brighton have proven to be a tough nut for many to crack this season.

Brighton haven't played since being knocked out of the FA Cup by Spurs last weekend and will be hoping to use the extra preparation period to their advantage. The Seagulls have drawn their last three league games and have been dubbed the ‘draw specialists this season but really they should have won more of those games and their current positioning of 9th will be disappointing to many of their fans.

Watford: Nkoulou, Baah, Etebo, Sarr and Elliot are the main injury concerns for the hosts this weekend.

Brighton: Sarmiento, Mac Allister, Trossard and Mwepu are all doubts for the game due to injury and illness. 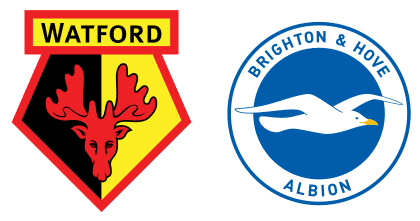