The 2019/20 Premier League season hasn't been kind on Watford… and it's not even a month old.

The Hornets have suffered three straight defeats and are the only top-flight side yet to have claimed a single point. What's worse is the news talisman and captain Troy Deeney will be ruled out until at least the start of November after undergoing knee surgery this week.

“We spoke about him being out for a minimum of two months,” head coach Javi Gracia confirmed today. “After that, we have to wait. It's true Troy is very important for us; he's our captain. But we have other players with experience and with character. We need them in this moment.”

Deeney's absence will hurt Watford. The striker remains underrated by the majority of Premier League observers, many of whom believe he is a battering ram and nothing more.

There is a subtlety to the 31-year-old's game that is often overlooked. He is a creator of chances as well as focal point and goalscorer. In Deeney's absence, the pressure will be on Danny Welbeck and Andre Gray to fill the avoid.

One of the pair – most likely Gray – is likely to start against Newcastle United on Saturday. It's a must-win for Watford. Defeat at St James' Park could, if recent reports are to be believed, spell the end for Gracia at Vicarage Road.

Owner Gino Pozzo and CEO Scott Duxbury are not afraid to make big decisions – however they are viewed by those who do not understand how Watford operate – in order to safeguard the club's Premier League status.

Yet the pair will know full well that Gracia's side are not as poor as their results suggest, especially this term. While it would be naïve to blame simple misfortune, there is plenty of evidence that suggests Watford's poor start to the campaign isn't terminal.

Take their goalscoring record, for instance. Watford have a single strike to their name in the top-flight this term: Gray's well-taken equaliser against West Ham United.

Yet their expected goals (xG) – a metric which measures chance quality based on where a shot is taken from – tally stands at 3.8. As the graphic below highlights, no team in the Premier League is underperforming their xG to such an extent. 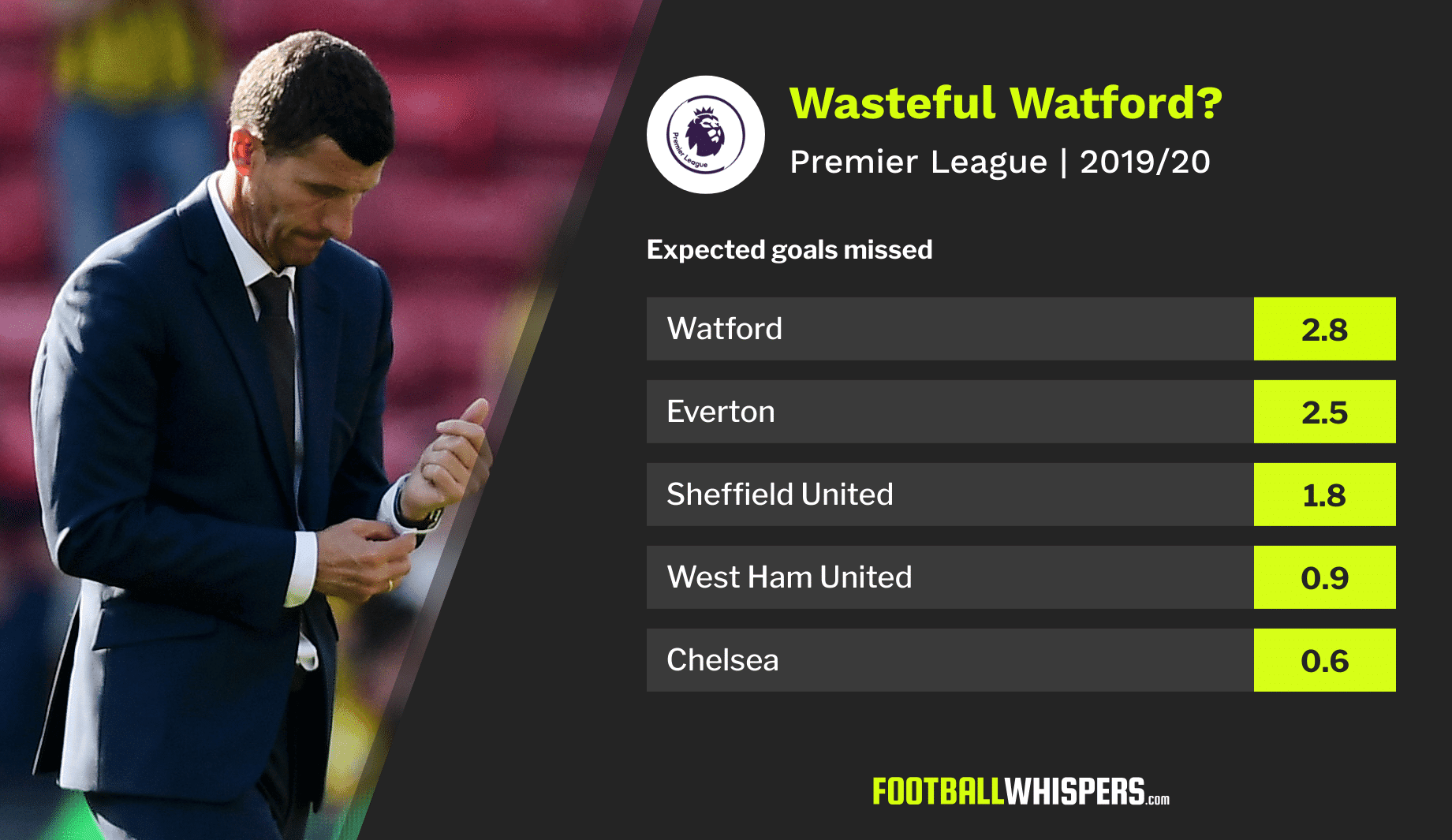 So it's clear Watford haven't struggled to fashion goalscoring opportunities this season, they've simply not taken them.

Watford are also third-highest among Premier League sides for touches in the opposition box per 90 (28.66). Again it demonstrates Gracia's team have made it into dangerous areas but simply haven't been clinical.

It would be easy to blame the forwards for such profligacy, but presentable chances have been passed up by the likes of Will Hughes, Roberto Pereyra, Abdoulaye Doucouré and Craig Dawson. That must change. 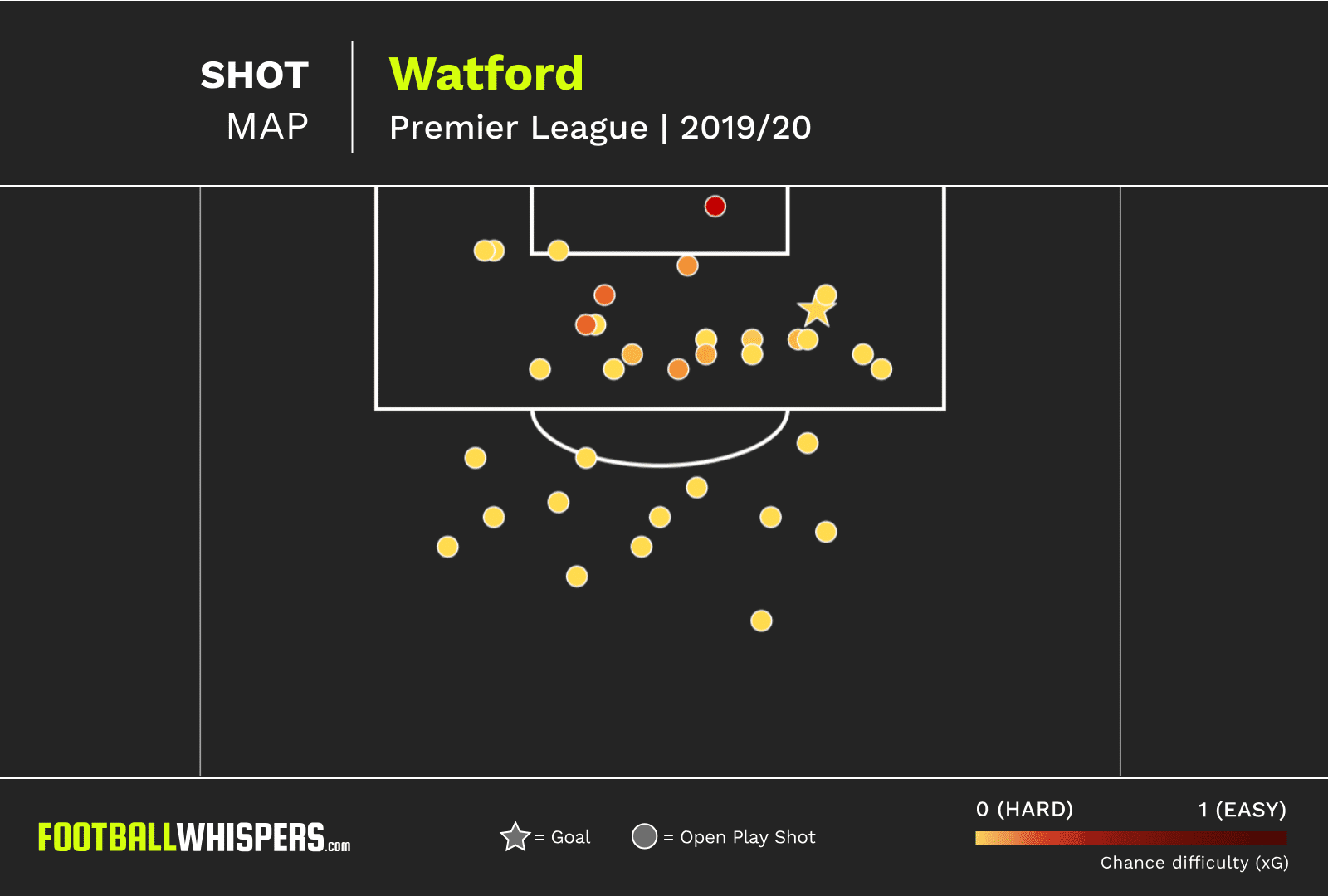 Watford's players are not blind to the problem that has harmed their start to the season.

“Sometimes the luck goes against you,” club stalwart Adrian Mariappa said this week. “In the Premier League there are fine margins. Look at our performances in the last two games: we have created a lot of chances but it hasn't fallen for us.

Mariappa added: “If we keep the performance levels up then I am sure it will turn. It is a test of character and mental toughness. I can see us coming through it and really pushing on as a squad.”

Gracia will certainly hope that is the case. If not – despite the support he retains from players and fans alike – another managerial change at Vicarage Road would be inevitable.