After six years under Pozzo ownership, Watford fans should know better. The family's intentions aren't always immediately apparent but it's rare they are left with egg on their faces and the signing of Adam Masina on a five-year deal from Bologna looks to be the latest masterstroke.

Yet when the combustible and, at times, unreliable José Holebas inked a new one-year agreement in January there were – with some justification – raised eyebrows. The former Greek international's relationship with the Hornets and their supporters has never been smooth.

He denied signing for the club after the deal was announced in the summer of 2015, claiming former club Roma had moved him on without speaking to him.

“They arranged my transfer without asking me,” he said at the time. “I haven't signed anything yet, I have to see the contract first. I don't know why this has happened, I know that both Roma and Watford announced my transfer, but they'd have to talk to my representatives first.”

His first impressions in pre-season in Germany were little better, refusing to sign a supporters' flag despite several requests from a member of the club's media team.

On the field he struggled to break into the side with the impressive Chelsea youngster Nathan Aké making the left-back slot his own while on loan. However, 2016/17 was Holebas' year and he finally nailed down the No.3 position.

He remained largely unchallenged last season, too, though the Dutch international Marvin Zeegelaar briefly looked to have overtaken him in the winter before being dropped by Javi Gracia in February.

On his day, the 34-year-old has been the best in his position since fan favourite Paul Robinson departed in 2003. In the 15 years since then, left-back has been something of a bogey position with Wayne Brown, Paul Mayo, Jermaine Darlington, Jordan Stewart, Mat Sadler, Carl Dickinson and Daniel Pudil all trying – with varying degrees of success – to make the spot their own.

Still, there were flashes of the Aschaffenburg native's tempestuous nature on all-too-many occasions, not least when in the 4-1 defeat to newly promoted Huddersfield Town he gave up chasing Rajiv van la Parra entirely, allowing Laurent Depoitre to lash home the visitors' third as he lay prone on the floor appealing for treatment.

It is moments like that, coupled with his often spiky demeanour, which mean he is not universally popular at Vicarage Road. Much like the decision to take up the one-year option on his contract. But it now appears the Pozzos' decision to keep Holebas around for a fourth season was with an eye on a back-up role with Masina taking over in his place.

The Khouribga-born full-back has shone in Serie A for the last three seasons after helping Bologna to back-to-back promotions and, at 24, looks ready to take over from Holebas at left-back.

Using Football Whispers' exclusive Player Persona radars, which characterise a player by their traits, we can see a stark difference between Masina and Holebas. 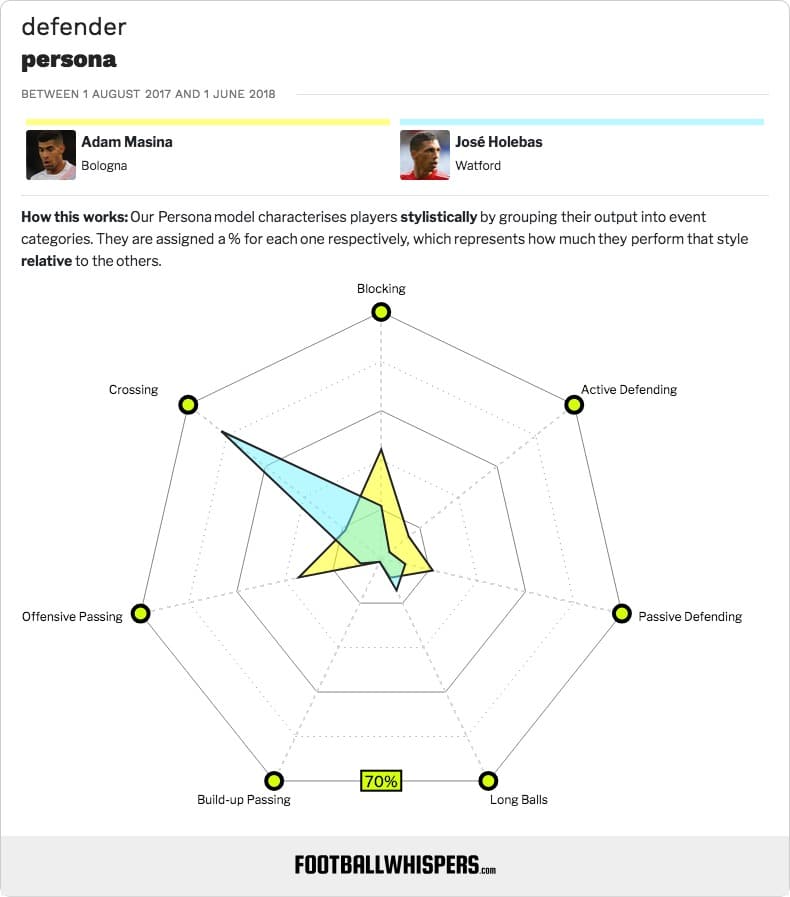 While Holebas (blue) is mostly characterised by his his tendencies in possession – particularly crossing and long balls – Masina is split between defensive and attacking attributes.

That is backed up in his numbers. No full-back in Serie A won more aerial duels last season (3.24 per 90) while Masina was seventh for tackles (2.63). Interestingly, ex-Watford wing-back Davide Faraoni, now of Crotone, is fourth with 3.19. Masina also fares well for interceptions, coming out 16th with 1.64 per 90. 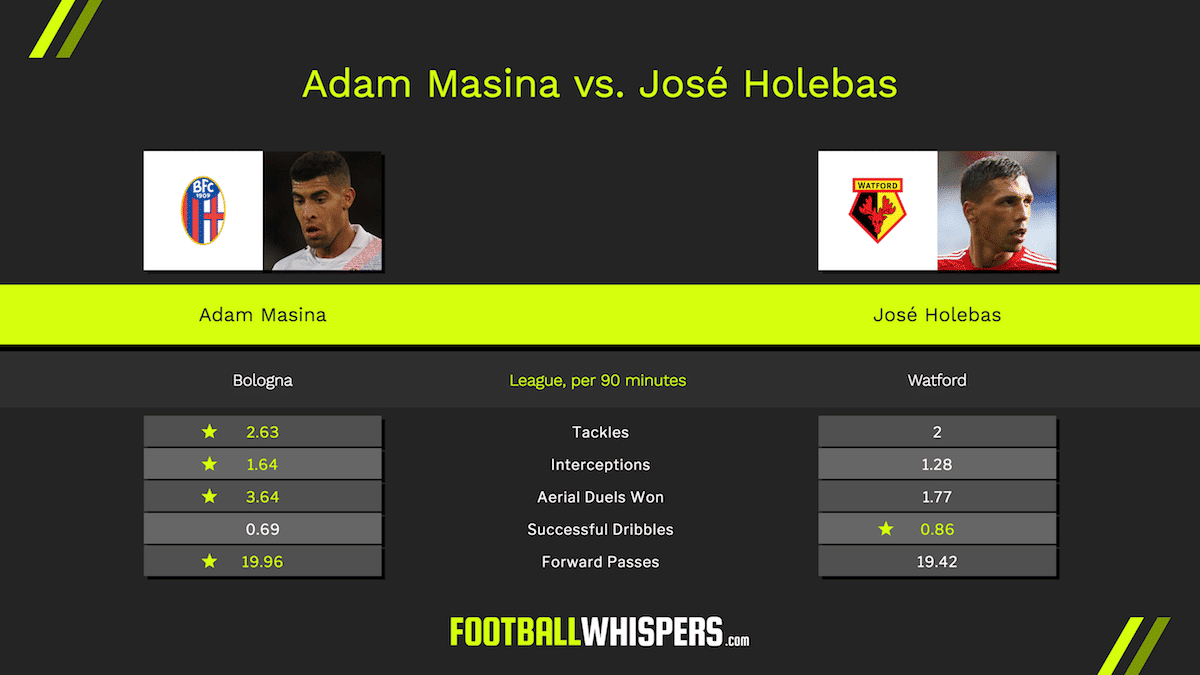 The two sides to Masina's game are demonstrated perfectly in the images below, taken from Bologna's 2-1 defeat against Internazionale in November.

Having spotted the danger from the forward pass he wins possession in the first still before getting his head up and demonstrating the presence of mind to launch a counter attack with a swift pass out to the right.

With just 1.65 crosses per 90 last season in Serie A, Masina's first intention when in possession is rarely to swing the ball into the box optimistically. Holebas, by contrast, was 27th among Premier League full-backs for crosses last term with 3.27 per 90.

That's not to say Masina is a poor crosser of the ball – far from it – but his preference is to drive forward and pass inside into midfield and that could be a big factor in the Hornets' decision to move from the defender was named Serie B Player of the Year in 2015 after helping I Rossoblu win promotion.

Watford's attacking play last season, as you can see above in Football Whispers' Team Persona, was dominated by putting crosses into the box.

Bringing Masina to Vicarage Road, therefore, adds another dimension to the attack as well as stiffening up the defensive line which was breached 64 times last season – only relegated Stoke City and West Ham United (68 each) shipped more.

It's too early to anoint Masina the heir to Paul Robinson's rightful heir, but his signing proves once again the Pozzos know what they are doing in the transfer market.