As a Watford fan you get used to explaining your club’s decisions to non-Watford supporters. But on this occasion, even the most myopic Hornet would be forgiven for being lost for words.

Each coach’s departure could be explained. Some weren’t even in the club’s hands. Take García, for example. A sudden heart complaint led the former Brighton & Hove Albion boss to resign shortly after the annual team photo was taken.

But sacking Javi Gracia. This one is has split the fanbase.

Yet the decision to remove Gracia from his post as head coach had become inevitable. The Spaniard had the backing of the majority of the Hornets’ support until last weekend’s 1-1 draw at Newcastle United. Then, if we’re using Twitter as a gauge – which, admittedly, is never ideal – he lost that majority.

Gracia’s decision to switch from his tried-and-overly-trusted 4-2-2-2 system to a brand-new 3-4-2-1 was long overdue. But his team selection and substitutions on the day were baffling. Where once Watford fans would have defended the man who’d taken their club to only their second FA Cup final and secured the club’s highest Premier League finish to the hilt, Gracia was teetering.

Yet owner Gino Pozzo and non-executive chairman Scott Duxbury did not pull the trigger when they had the perfect opportunity thanks to the international break. Instead, they waited a week and attempted to bury the news just before half time of England’s 4-0 win over Bulgaria in a 2020 European Championships qualifier.

Their masterplan failed. For two reasons.

Firstly, because the England game was predictably dull thanks to Bulgaria’s refusal to attack. Secondly, because 30 minutes later the initial bombshell was followed by Sánchez Flores’ return to Vicarage Road, a little over three years since he left his post halfway through a two-year deal when the club applied a break clause. 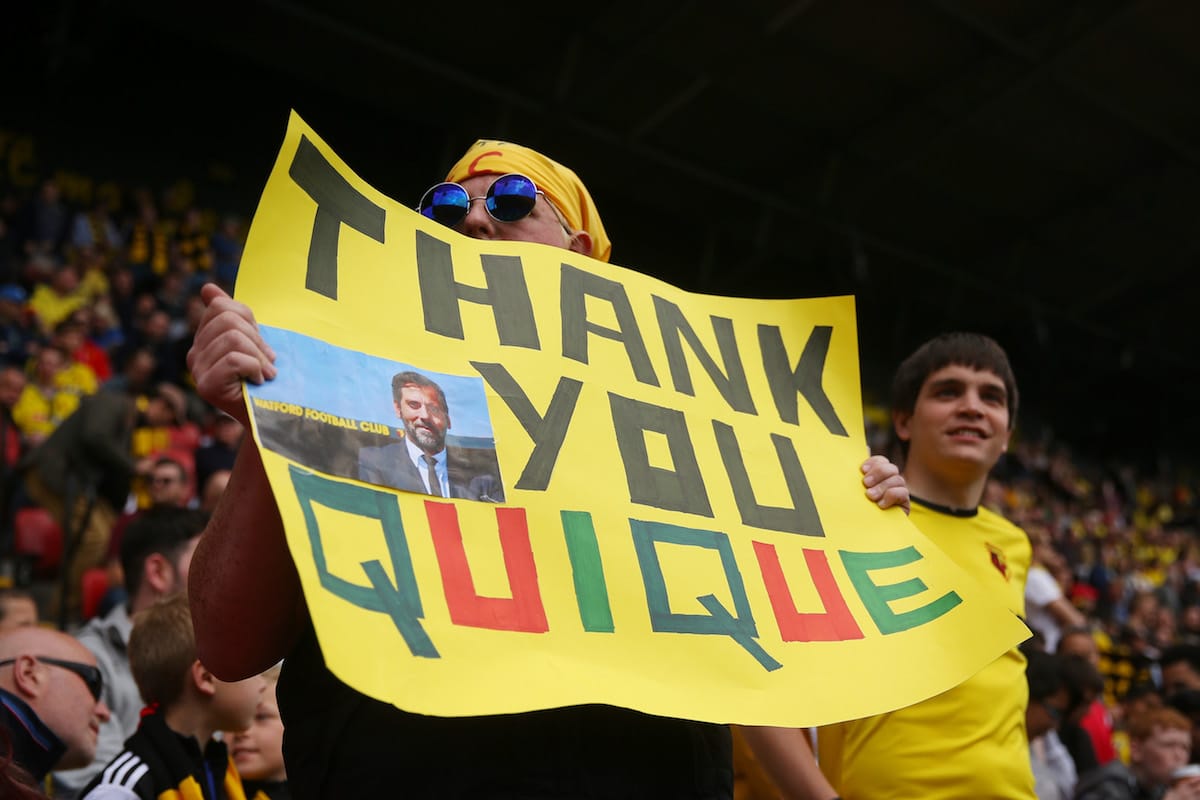 So let’s unpack this, starting with the decision to sack Gracia four months after reaching the FA Cup final. Watford fans aren’t naïve enough to believe sentiment has a place in modern football – especially not at Vicarage Road. But even so, there was a feeling he deserved more time in spite of the raw numbers which make for appalling reading.

A run of eight defeats in 11 and just five wins in 16 games was deeply concerning. This run appears to have stemmed from that incredible come-from-behind FA Cup semi-final win over Wolverhampton Wanderers in April and Gracia has paid for being unable to halt the slide.

He was too loyal to certain underperforming players – chief culprits included Roberto Pereyra, still dining out on his majestic August 2018 – and José Holebas who, at 35, finally appears to be on the downward slope.

Furthermore, Gracia’s refusal to budge from his 4-2-2-2 system – which was a revelation last season– until it was too late was another nail in his coffin.

But he was not helped by the club’s failure to land a top-drawer centre-back, an area of the squad which has been woefully under-invested in since the Hornets’ return to the Premier League in 2015.

Craig Dawson was a solid but unspectacular addition from West Bromwich Albion and his first four outings in Watford colours have been shaky. If we’re being generous. Defensive partner Craig Cathcart enjoyed a fine 2018/19 but it’s not a pairing which has a top-half feel to it. 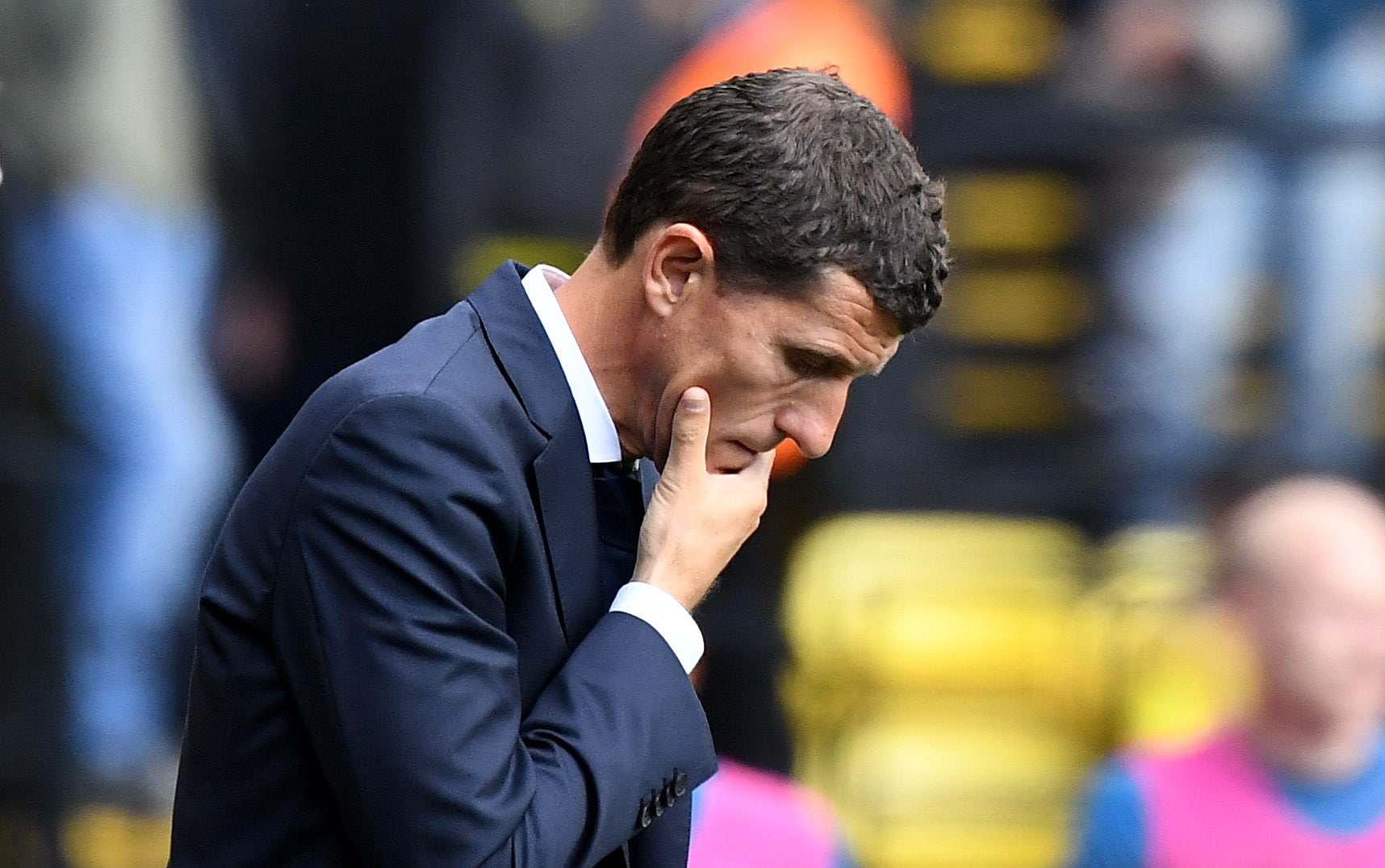 The frustrating thing is Pozzo and Duxbury were happy to sign off on a club-record fee for Rennes winger Ismaïla Sarr – an area of the team where few felt there was an urgent need for improvement. That fee, it’s reported, could be anything up to £40million, shattering the £18.5million paid for Andre Gray in 2017.

Money, then, was not the problem. A lack of foresight was. And that is where Gracia was let down by the club’s hierarchy, for it is they who provide the players. The head coach picks and coaches the team. That is one of the great successes of the Pozzo era, devolving power from the traditional ‘manager’ so the wheels keep turning when there is a change in the figurehead role.

Gracia would be within his rights to feel aggrieved that he hardly had the chance to use Sarr who, owing to Senegal’s run to the African Cup of Nations final, did not have a pre-season to speak of. So when he finally arrived at Watford’s London Colney training HQ in the final week of the transfer window, he was way behind his team-mates in terms of fitness. 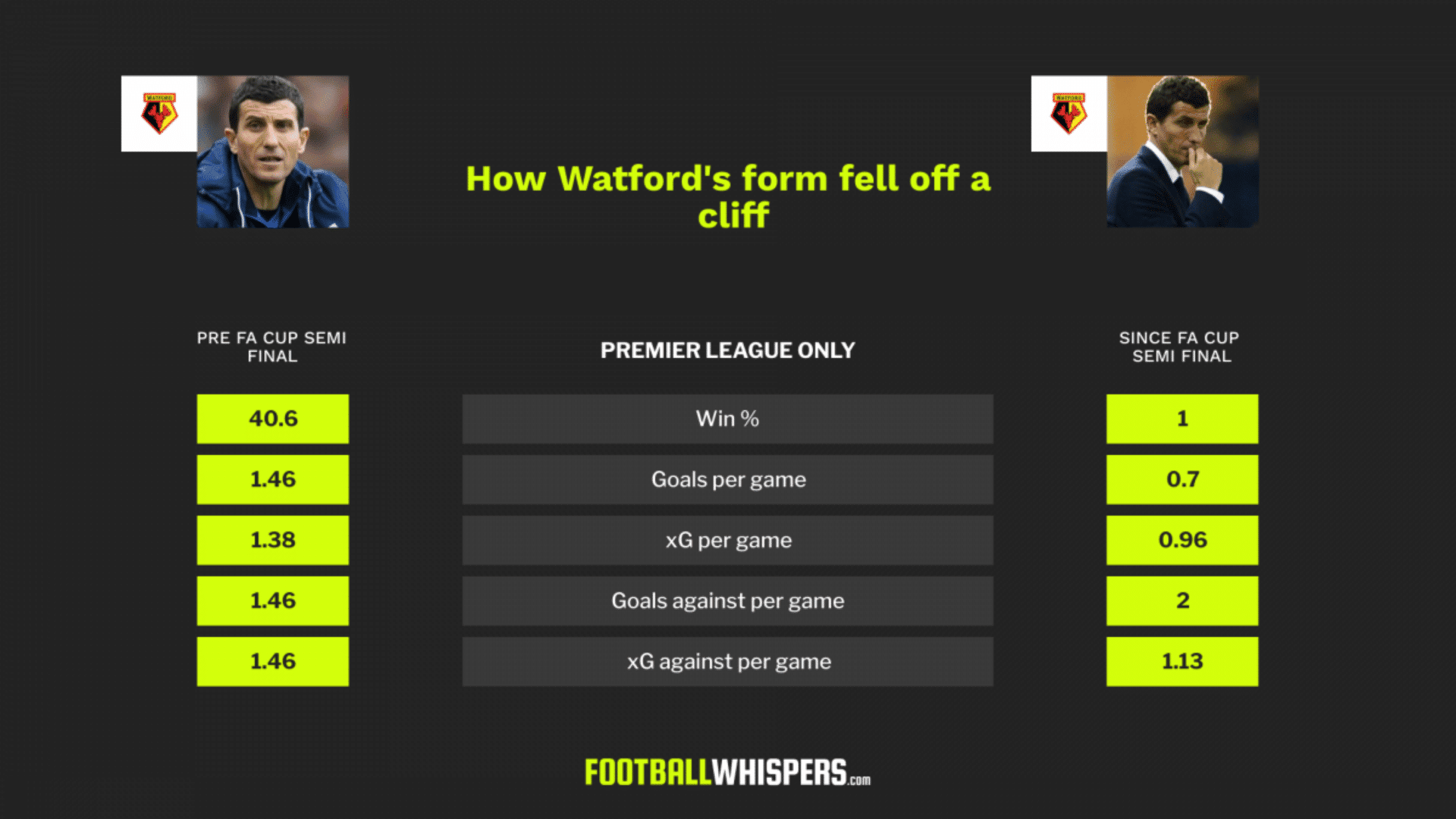 Ditto Danny Welbeck who was being eased back to full fitness following an ankle break last autumn. The duo were Watford’s two big investments in the summer transfer window but they played a combined 55 minutes in the Premier League before Gracia was sacked.

But like sentimentality, fairness does not come into these decisions either. Ice-cold impartial judgment does and Gracia’s time at Vicarage Road is over.

In his place, Sánchez Flores returns three years after guiding Watford to 13th and an FA Cup semi-final. At the time of his sacking, the football world was up in arms. What could little old Watford possibly hope to achieve that would top that?

As it turns out, Gracia showed exactly what an unfashionable club from Hertfordshire could aspire to by outstripping both of his countryman’s achievements. Watford took the scenic route – via Mazzarri and Silva – but they were more than vindicated by the end.

On the face of it, Sánchez Flores was popular. But, by the end, there was a welcome relief at the uncoupling of club and head coach and he was afforded a rousing send-off in the final game of the 2015/16 season which might as well have been a Quique Sánchez Flores testimonial, rather than a 2-2 draw with already safe Sunderland.

Within the club, though, there were concerns about his lack of training ground discipline and timekeeping – among other things. After leaving, Sánchez Flores took a swipe at the Hornets' hierarchy.

“Among the directors of the club I never saw any desire to live those moments with joy and intensity considering it was something historic,” he said in an interview for a book, via The Athletic.

“I’m in football for the love of it. I’m passionate about the game. I don’t know how to work coldly, pessimistically and without enjoying positive achievements.

“I didn’t want to stay somewhere where I understand that things were not going to be done in a way that I liked.”

The former Getafe and Atlético coach was stubborn and rarely deviated from his favourites. Left-back Holebas was not one of them and the Greek was not a fan.

The defender is famously spiky and that first exchange between the former Roma defender and Sánchez Flores could be interesting. It will certainly set the tone for the relationship between the two.

“I think everyone knows this coach,” Holebas told the Evening Standard in the run-up to the FA Cup final. “He didn’t only do it with me. He did it with even bigger players than me, especially in big clubs where he cut off some big guys in the team.

“That is also a thing of respect as well, because these guys have been in the club before and he came in and just changed everything.”

One thing which is unlikely to change, though, is Sánchez Flores’ style of play. It was defensive, direct and, at times, thoroughly uninspiring. Watford can expect a return to 4-4-2 and while that’s good news for whoever will end up partnering Troy Deeney up front, Gerard Deulofeu and Sarr will not enjoy being asked to play as part of a compact midfield four with a greater onus on their defensive duties than ever before.

Prior to Sánchez Flores’ arrival, Almen Abdi was the team’s conductor from central midfield. By the end of the 2015/16 campaign, the Swiss had been converted from a Rolls Royce into a Land Rover, diligently chugging up and down the right-hand side for 90 minutes for the greater good.

He was not alone. Failure to get anything from Steven Berghuis, who later went on to star for the Netherlands, was a bad look for Sánchez Flores. As was Holebas’ transformation from bad boy to one of the most reliable full-backs in the Premier League.

Apart from Gracia, Sánchez Flores is the only coach to win 45 points or more with the Hornets in the top flight. He achieved that by making his side better than the sum of their parts; defensively resolute and hard to beat – qualities which have been lacking in this dismal run of form.

The 50 goals conceded during 2015/16 remain the fewest the Hornets have shipped since returning to the Premier League and after recording eight clean sheets in their first 17 games under Sánchez Flores, that number might have been lower still were it not for a dire second half of the season.

Yet the question lingers, why him? It is hard to get away from the fact he was A) Available, having left Shanghai Shenhua in July and B) Knows the club and its hierarchy. Beyond that, it’s difficult to see how someone Watford felt they’d outgrown more than three years ago is suddenly the best man for the job again.

But Pozzo and Duxbury have proven the doubters wrong time and time again. Now they’ve got even more people to win over.