It was not supposed to go like this for Watford.

Buoyed by the club-record signing of Ismaïla Sarr, the surprise addition of England international Danny Welbeck and the return of their Z-Cars walk-on music, the Hornets were meant to brush aside brave Brighton & Hove Albion to begin 2019/20 with a routine three points.

They had, after all, beaten the Seagulls on the opening weekend of last season. The visitors did not get the memo this time around.

Abdoulaye Doucouré put through his own net inside half an hour before second-half strikes from Florin Andone and Neal Maupay ensured the worst possible start to the season for Javi Gracia's side.

Make no mistake. This was not a smash-and-grab from Graham Potter's side. Albion were better in every conceivable measure and thoroughly deserved their win – something no Hornets fan would argue with.

Clubs tend to sugar-coat or even restrict post-match reaction after disappointing results in the hope of controlling the narrative.

But goalkeeper Ben Foster was refreshingly honest in his assessment of a bad afternoon at Vicarage Road, telling the Hornets' YouTube channel the visitors ‘wanted it more'.

“I think it's a bit of a crash down to reality really,” Foster said. “I think we thought we would just have to turn up today and that would be it. But the Premier League ain't like that anymore.

“We need to look at ourselves and get back to the basics we did very well all last season and put that into practice. Because if we carry on the way we did today it will be a long hard season.

He continued: “I think they just wanted it more than us today, which is crazy because that's our basic ethos. We've got to work hard, [show] urgency and want to win. We almost looked as if we could turn up and do it. The prospect of a defeat or even a draw today didn't enter anybody's mind.”

Pressed further on what had gone wrong for the Hornets, Foster said: “I'd be interested to see the stats because I guarantee they will beat us on virtually every stat – running stats, possession, passing, all that kind of stuff. ” 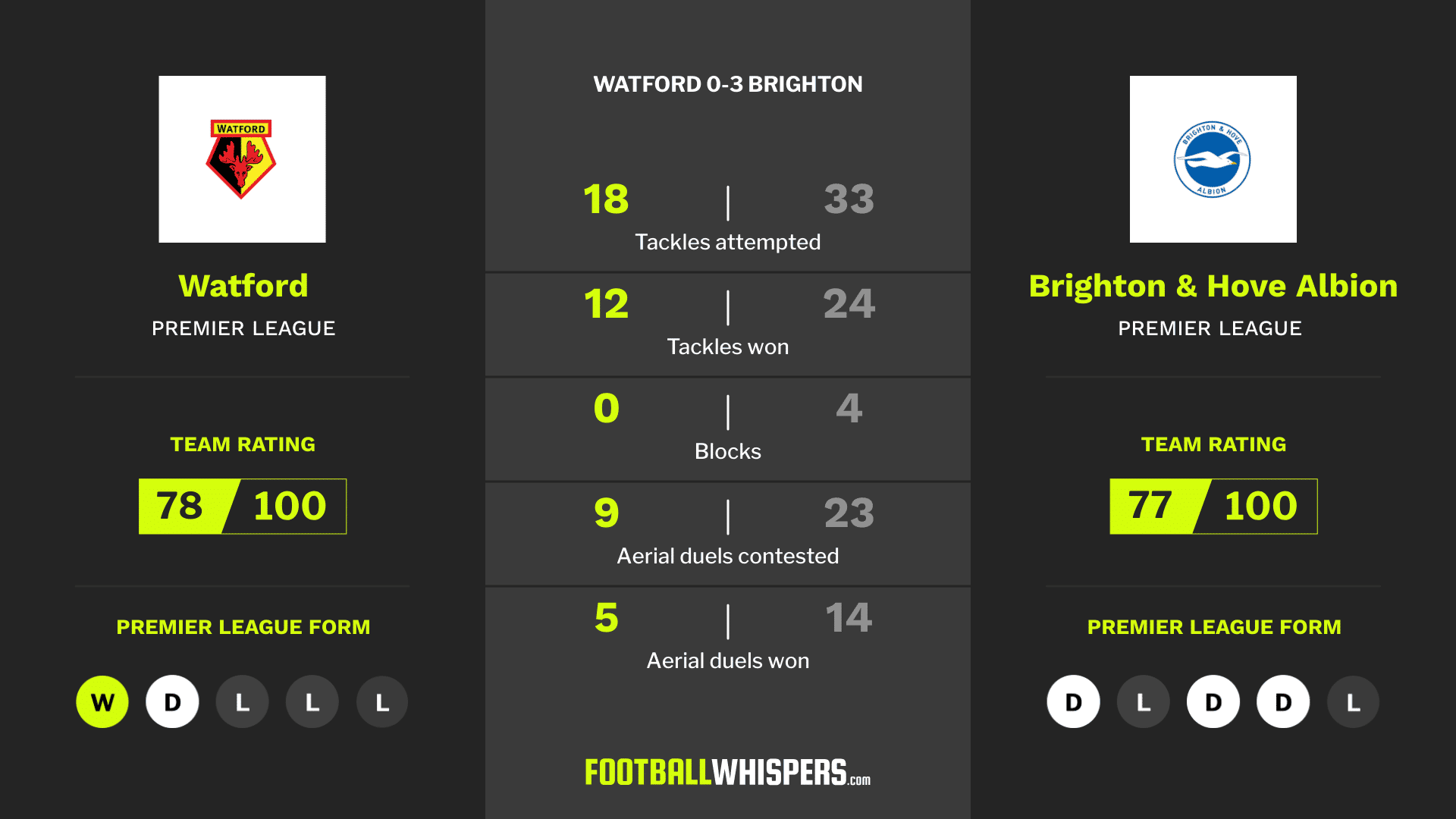 Luckily for Foster and Watford, here at Football Whispers we have access to a lot of invaluable data which makes it easy to dissect what went wrong for last season's FA Cup runners-up from a numerical perspective, as well as using the eye test to dissect a miserable afternoon at the office.

Last year, Gracia's side were fifth in the Premier League for possessions won in the attacking third with 4.15 per 90. On Saturday, that figure fell to just three which, versus the other 19 teams in England's top-flight, was only good enough to put Watford in 13th place.

Of course, reading too much into such a small sample size is fraught with danger. Had the boot been on the other foot, no-one would have been tipping the Hornets for a surprise title tilt. But it cannot be mere coincidence Watford fell below the levels they set last season in this – and numerous other metrics – on the same day they were roundly beaten.

On one occasion, just nine minutes in, Brighton skipper Lewis Dunk collected possession just outside the ‘D' of the visitors' penalty area and was allowed to carry it forward until he'd broken into Watford's half. At no point was the defender challenged by anyone in a yellow shirt.

While Watford aren't renowned for being a pressing side in the same way Manchester City or Liverpool are, they were ninth in the Premier League last term for allowing the fewest passes per possession with 3.8. City (3.21) and Liverpool (3.22) led the way, for context.

But none of that urgency was on display at Vicarage Road on Saturday as Brighton made the perfect start to life under new head coach Potter. The Sussex outfit made 33 tackles to Watford's 18 and won 14 of the 23 aerial duels they contested; the Hornets triumphed in just five of nine.

While Will Hughes made more interceptions than any player on the field with four, eight of the top ten tacklers on show were Brighton players. The two Hornets in the mix were centre-back Craig Dawson (3) and full-back José Holebas (2).

Even Troy Deeney, who usually sets the tone in an attack and defensive sense, made just a solitary successful tackle. Watford's starting midfield – Doucouré, Étienne Capoue, Hughes and Gerard Deulofeu – attempted just four challenges between them.

Foster's prediction Brighton would have beaten the Hornets in most metrics was not entirely accurate. While Albion had the upper hand for passes (347 vs. 325), the Hornets made more in the attacking third (70 vs. 60) and took more shots (11 vs. 5), albeit both sides had three on target.

There is good news for Watford, though. It's week one of a 38-game season and all is not lost at this stage. For Gracia, his staff and analyst Isidre Ramón Madir, it's back to the drawing board.

Evidently, it's going to take more than the return of Z-Cars to get Watford back to their best.