For all the good new Watford head coach Marco Silva has done in his short time at the club he has, thus far, struggled to tighten up the Hornets' backline.

With their goal breached 21 times in 12 Premier League games, Watford have the fourth-worst defensive record in the top flight despite sitting in the top half. That number is skewed somewhat by the six shipped at home to champions-elect Manchester City, but it will still be of concern for the Portuguese.

Yet, ironically, Watford have more centre-backs than you can shake a stick at. The summer loan signing of Molla Wagué from Udinese means there are now eight senior centre-halves on the Hornets' books, albeit one – Tommie Hoban – has been ruled out with another long-term injury.

That still leaves Silva to choose between Miguel Britos, Craig Cathcart, Christian Kabasele, Younès Kaboul, Adrian Mariappa, Sebastian Prödl and Wagué. It is worth noting that Northern Ireland international Cathcart has just 19 minutes to his name this season due to injury and has not started a game since April.

Kaboul, too, has been out of action since the start of September due to a hamstring problem which began in the opening-day draw against Liverpool. Reigning Player of the Year Prödl has also spent an unwelcome period on the sidelines, restricting him to just two starts this term, the last of which came in August.

But the Austrian powerhouse is back now and was on the bench for Sunday's 2-0 win over West Ham United. He is Watford's most impressive and reliable centre-back but, thanks to the sheer number of rivals for a starting spot, he has a fight on his hands.

So who should start for the Hornets at centre-back? We've crunched the numbers and these are our findings.

How do the Hornets compare? 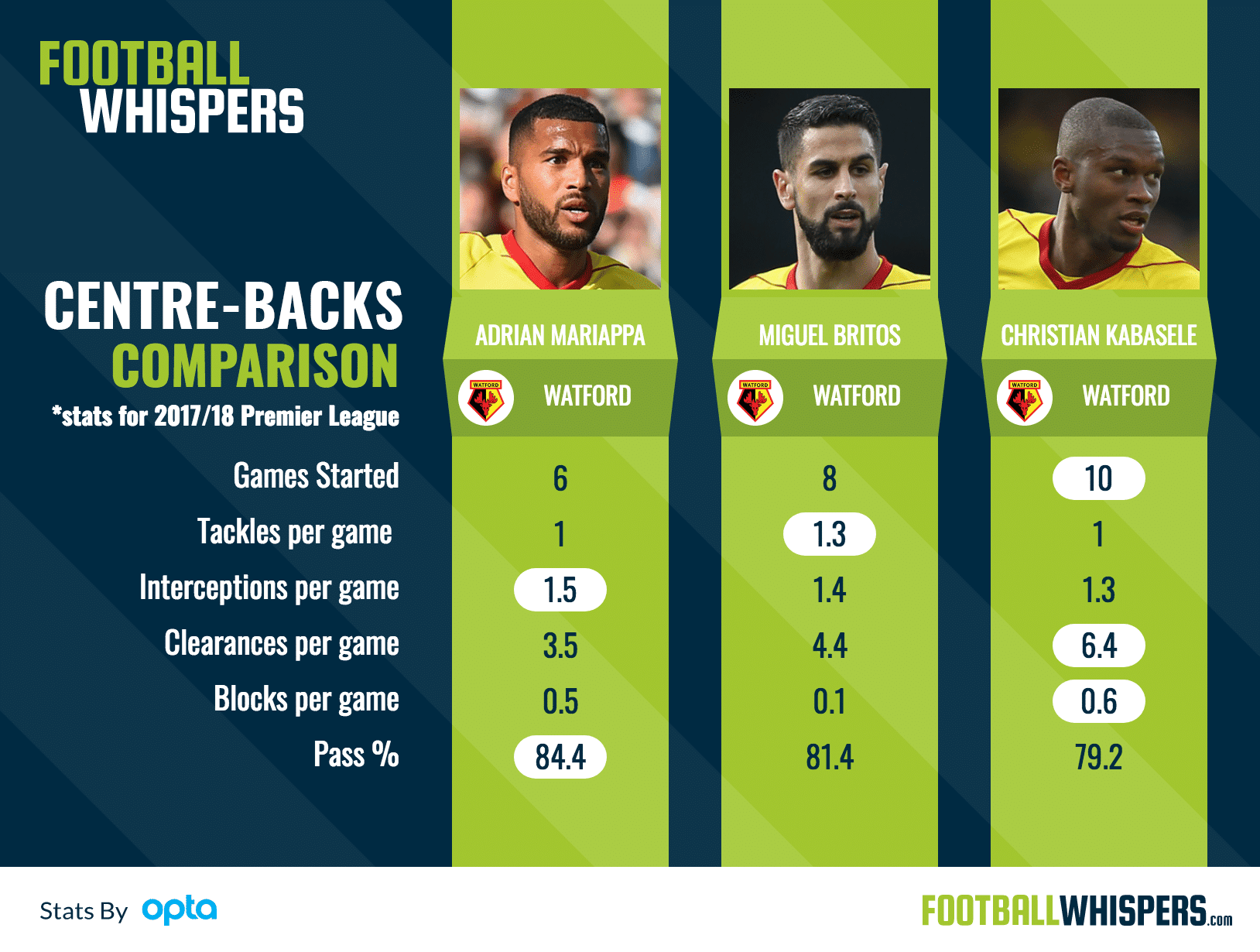 Splitting the seven Watford centre-backs who have played this season into two groups based on how regularly they have played, it is clear to see there isn't a great deal between the three who have played most frequently – Mariappa, Britos and Kabasele.

In terms of tackles per game there is only 0.3 per game to separate the Uruguayan from the other two, while Mariappa just pips his defensive colleagues in terms of interceptions.

Clearances per game isn't a particularly useful measurement. It is, after all, just getting rid of the ball. Perhaps, therefore, it is unsurprising that because Kabasele has completed the most, he has therefore the lowest passing accuracy of the trio with 79.2 per cent – more than five per cent behind Mariappa.

That could be explained, however, by the fact the Watford academy product attempts the fewest passes per game (32.8) of the three. Britos tries the most (42.5) and Kabasele (35.8) is in the middle. Although it is widely accepted that Mariappa is better on the ball than Britos in particular, who can be sloppy in possession. 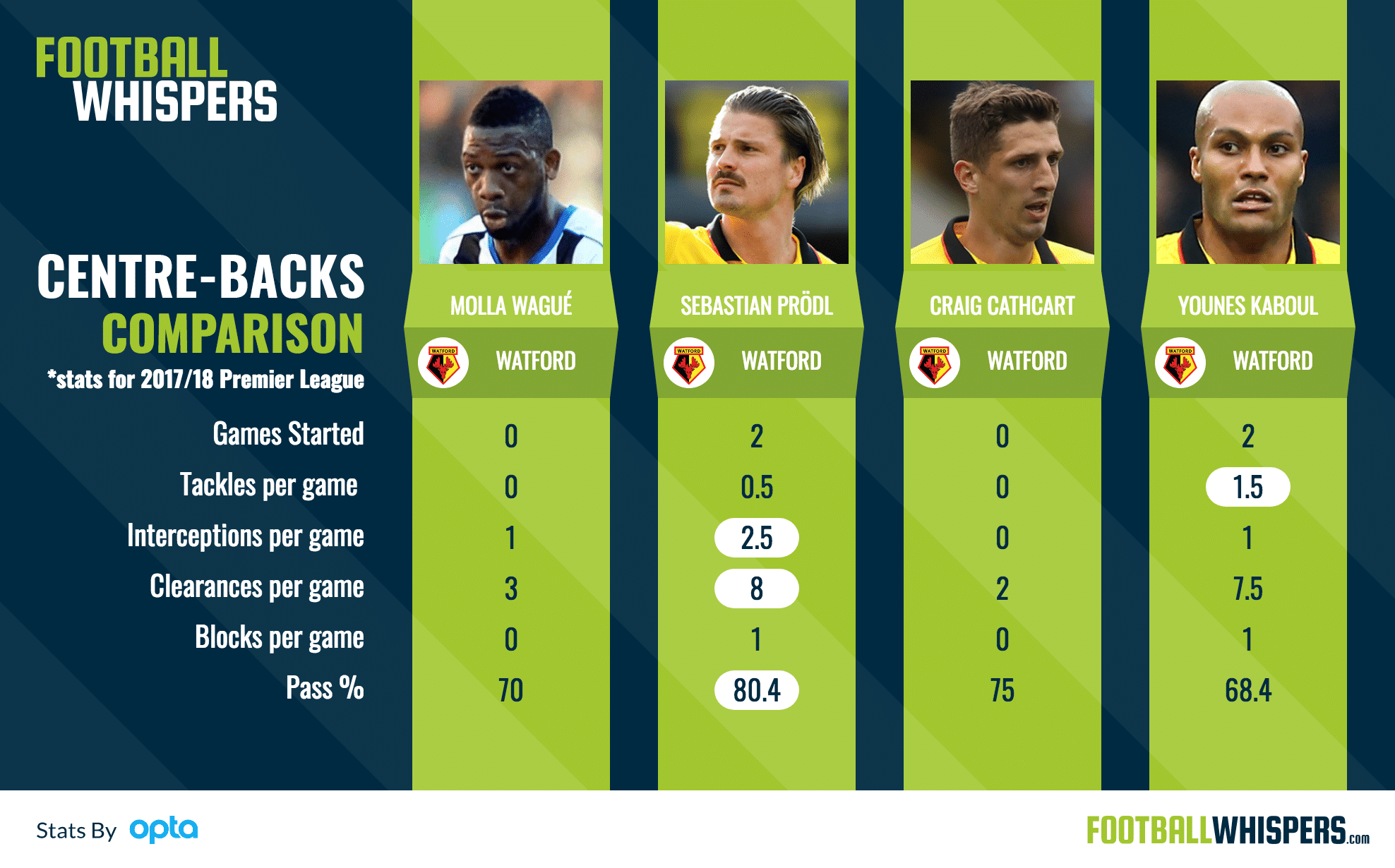 Of the other four to appear in the Premier League this season, only Prödl and Kaboul have even made starts. And with just 180 minutes apiece, it's hard to make any sweeping conclusions from the numbers above.

It is clear, however, that there are stylistic differences between Prödl and Kaboul. The former averages almost twice as many interceptions than the latter who makes three times the number of tackles as his defensive colleague. To that end, it is fair to surmise Prödl's approach is more about standing off and picking off loose passes while the Frenchman goes to attack the ball, engaging and winning tackles; playing as more of a stopper, if you will. While more interceptions can also mean they read the threat of danger better than others.

So what is Watford's best pairing?

Numbers alone will only tell you so much in this instance. As alluded to already, there is an element of fitting the right players together stylistically. In the same way you cannot – as Everton are finding out – cram a load of No.10s into the same side; you need a blend when it comes to centre-backs too.

Conventional wisdom says that in a two you need one stopper who will step up to attack the ball and one sweeper who will hang back and clear up and loose ends or intercept passes.

On that basis it is hard to look beyond Prödl and Kaboul, even though they have managed just two games each this term thanks to injury. While Kaboul is the proactive member of the duo, stepping out of the defensive line to engage attackers and win the ball back, Prödl offers a more reactive style, holding his position, reading the game and punishing poor passes by intercepting.

How should Watford set up v Newcastle?

That's not to say the Kaboul-Prödl axis is Watford's best option though. In the win over David Moyes' Hammers, Silva employed a back three with Mariappa and Britos flanking Kabasele in the middle.

In that set-up the onus was on the Belgian international to go to the ball while the other two held their position and tidied up in behind. Against the limited threat the Hammers offered it worked well. The aerial presence of Andy Carroll was nullified and the visitors' best chances both fell to Cheikhou Kouyaté when Watford switched off as a defensive unit.

The challenge facing Silva's side this weekend could not be more different though. After setting up in a 4-4-2 in their 4-1 loss at Manchester United, Newcastle boss Rafa Benítez could be sorely tempted to give goalscorer Dwight Gayle another run-out.

Despite bagging 23 in just 26 Championship starts as the Magpies marched towards the title last term, the former Crystal Palace striker was surplus to requirements over the summer and subject of Fulham transfer rumours.

But he is back in favour and offers a very direct, pacy threat by running in behind and getting defenders on the turn. Neither Kaboul  – who is unavailable anyway – nor Prödl would thrive against Gayle as they are not particularly quick or mobile.

To that end, and perhaps as Newcastle are likely to go with a front two again, the three who start against West Ham are best suited to dealing with Gayle and whoever plays out of Joselu and Brighton transfer target Aleksandar Mitrović.