Over the last decade, few clubs in Europe have possessed, and eventually lost, as much elite-level talent as Valencia.

From homegrown stars in David Silva, Juan Mata and Isco, to diamonds the La Liga club polished in Jordi Alba, Nicolás Otamendi, João Cancelo and David Villa. They played, they starred, they moved on.

The problems that have caused this talent drain are myriad – and excellently detailed in 2017 by Rory Smith in The New York Times – yet despite their struggles on and off the pitch, Valencia continue to produce and hone the skills of players who will one day shine for the most powerful clubs in Europe.

Los Che's current squad is not short quality or potential. Carlos Soler and Toni Lato have been linked with Real Madrid transfer target in the summer; and there are high hopes for Álex Centelles, currently playing for the club's B side.

Yet the new jewel in the crown is Ferran Torres, who made his debut for Valencia at 17 years old, has already played 32 games for the first team, and was part of the Spain Under-17 side which reached the 2017 World Cup final, where they were beaten by England.

An attacking midfielder, Torres has all the attributes required (as detailed below) to become a star. And that is why so many sides have attempted to prise him away from Mestalla.

Real Madrid, Barcelona, Chelsea, Liverpool and Juventus have been linked with the teenager over the past year. Yet Valencia protected themselves from losing Torres on the cheap.

Last April, the 18-year-old signed a new contract with the club, extending his deal until 2021. The most important aspect was, however, the significant increase in his buyout clause; it was raised from just €8million to €100million.

“I still can’t believe it, it’s marvellous,” Torres said after signing his new contract with the club he joined at the age of seven.

“I’ve had a lot of good times in my career considering how young I am. Everything has gone really quickly, but I’ll keep my feet on the ground and stay focused on working.”

“I hope that this club achieves all the success it deserves. Every kid in the academy dreams of making it to the first team and I’ve got there at a young age.”

While Torres has achieved one dream, there will be plenty more to fulfil in the coming years. That will likely be away from Valencia, although the youngster's affinity with his hometown club may see him remain in the east of Spain for a few years yet.

So what is all the fuss about? Well, like the majority of young Spanish players, Torres has an abundance of technique and marries that with excellent balance, composure and the ability to play off either foot.

This is what makes him a threat in wide positions rather than blistering pace. Torres is usually deployed on the right of a midfield four – although he can be used from the left – and isolates opposition full-backs. Yet instead of relying on physical gifts to beat defenders, the teenager uses his intellect and skill.

It's why he has been compared to Real Madrid star Marco Asensio; the Spain international who is renowned for having a penchant for the spectacular.

Both are players who are building their reputations from wider positions. However, you sense their futures lie in the centre of the pitch, an area where they can create and threaten goal with greater regularity.

For Torres, that is evident from the below stills, which are taken from Valencia's 0-0 draw with Villarreal.

Torres started the game on the right and was up against Jaume Costa. Not able to beat the left-back for pace, the teenager, who stands 6ft, often came infield to fashion opportunities, as shown below. 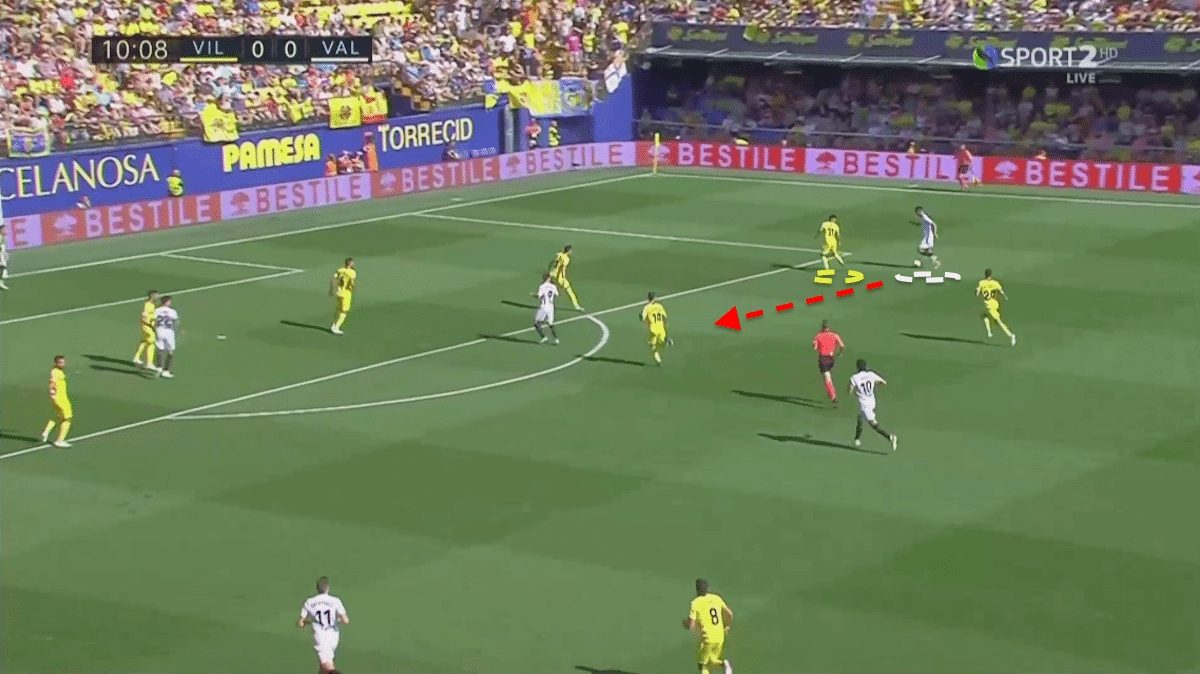 As he moves inside, Torres attracts two further Villarreal players towards him. Yet instead of laying the ball back to the waiting Dani Parejo (No.10), he reverses an intricate pass to Kevin Gameiro. 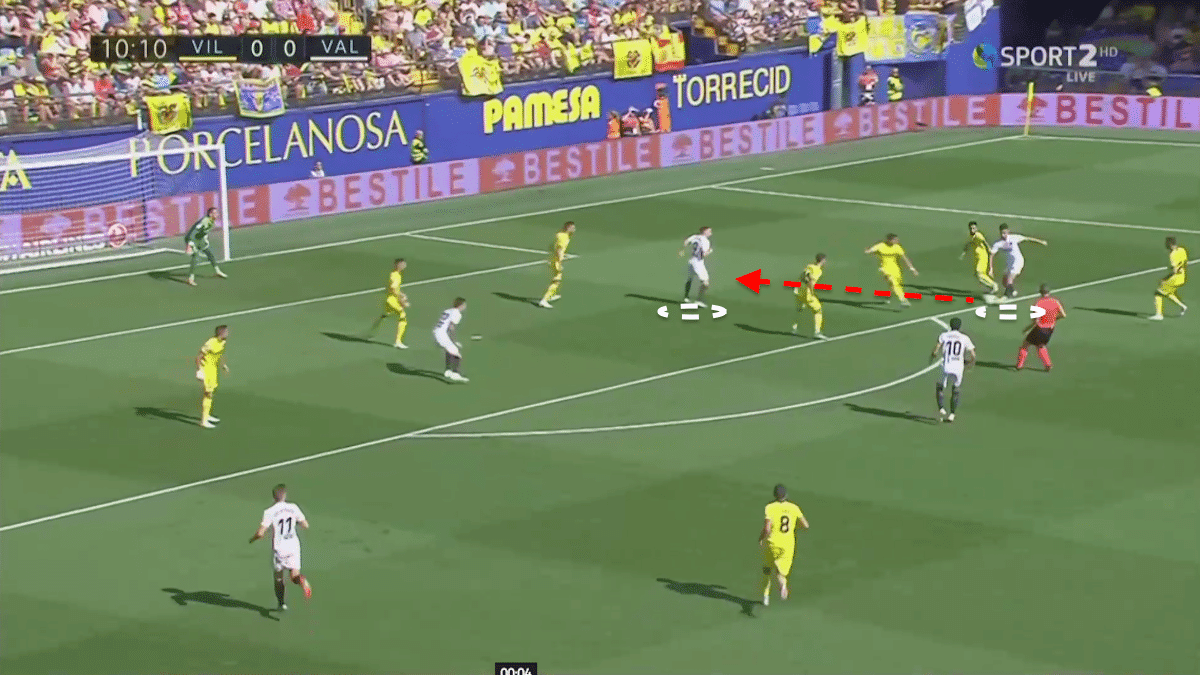 The Frenchman is able to turn onto the pass and release a shot, however, he fires his attempt straight at the covering defender and home side are able to clear the ball. 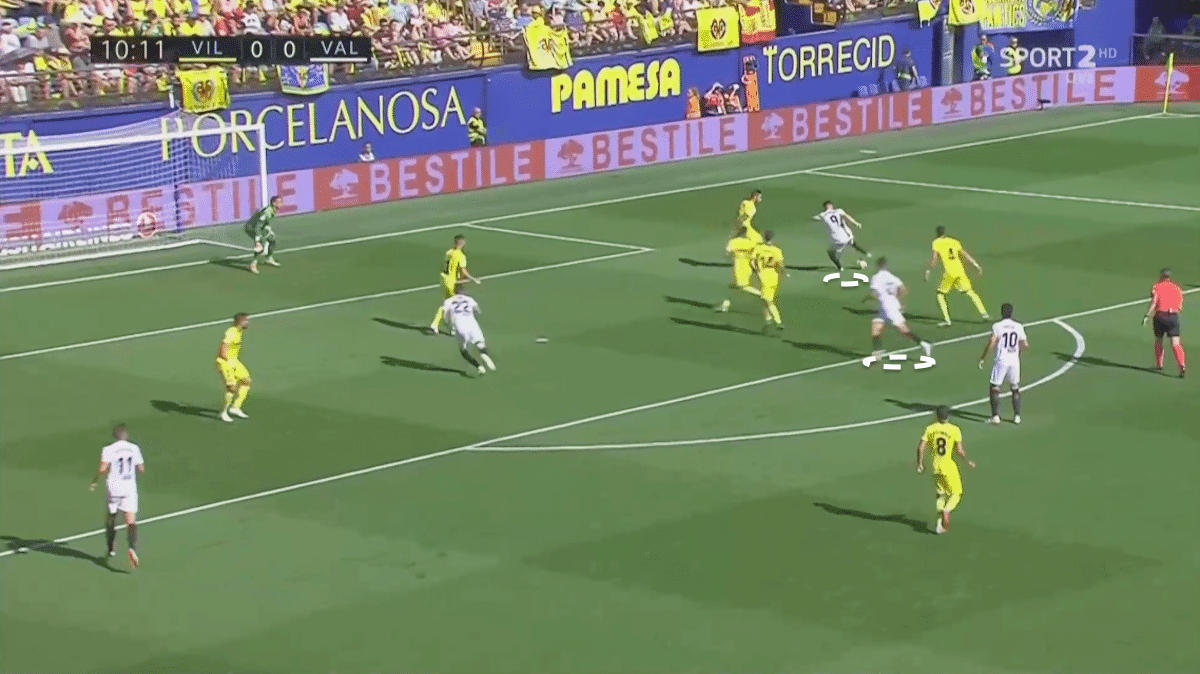 While it didn't lead to a goal, the move highlighted the problem Torres poses defences when in the final third. He has the vision required to spot difficult passes and the ability to execute them.

That also makes him a threat when in wide areas, as highlighted below from Valencia's win against Huesca.

With Los Che searching for a goal, Torres stays out near the touchline and awaits a pass from Soler. 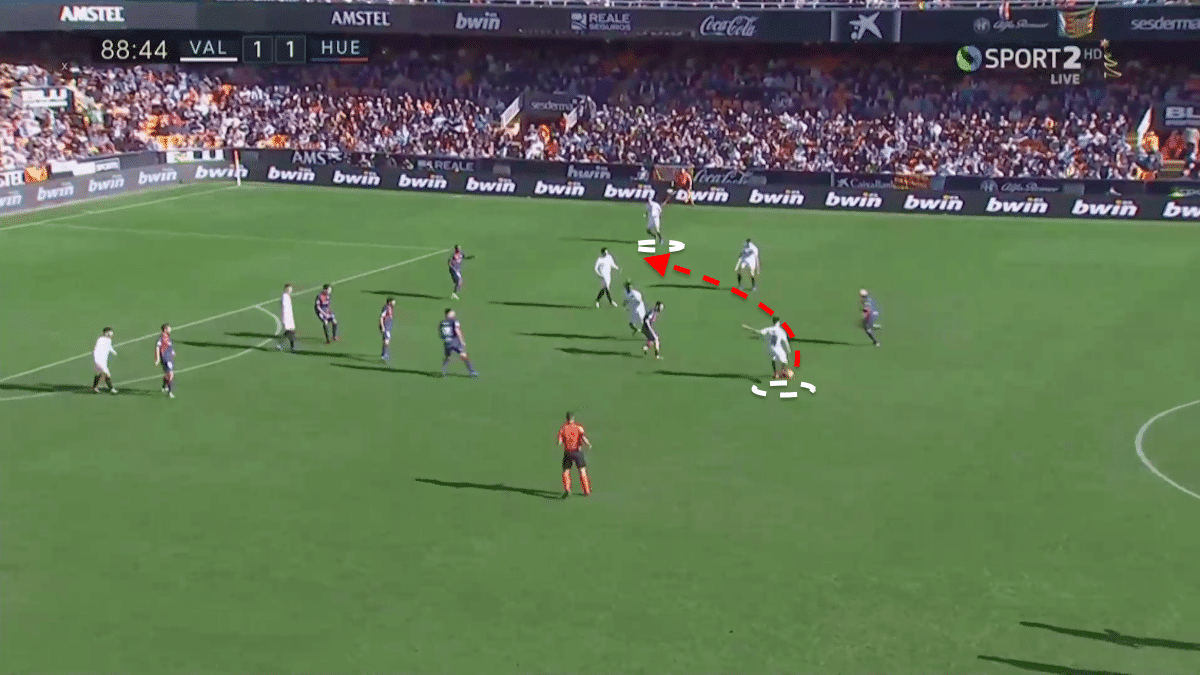 He isn't closed down and has time to take a touch and asses his options in the penalty area.

It's a high-pressure moment and the cross has to be spot on. The teenager delivers. 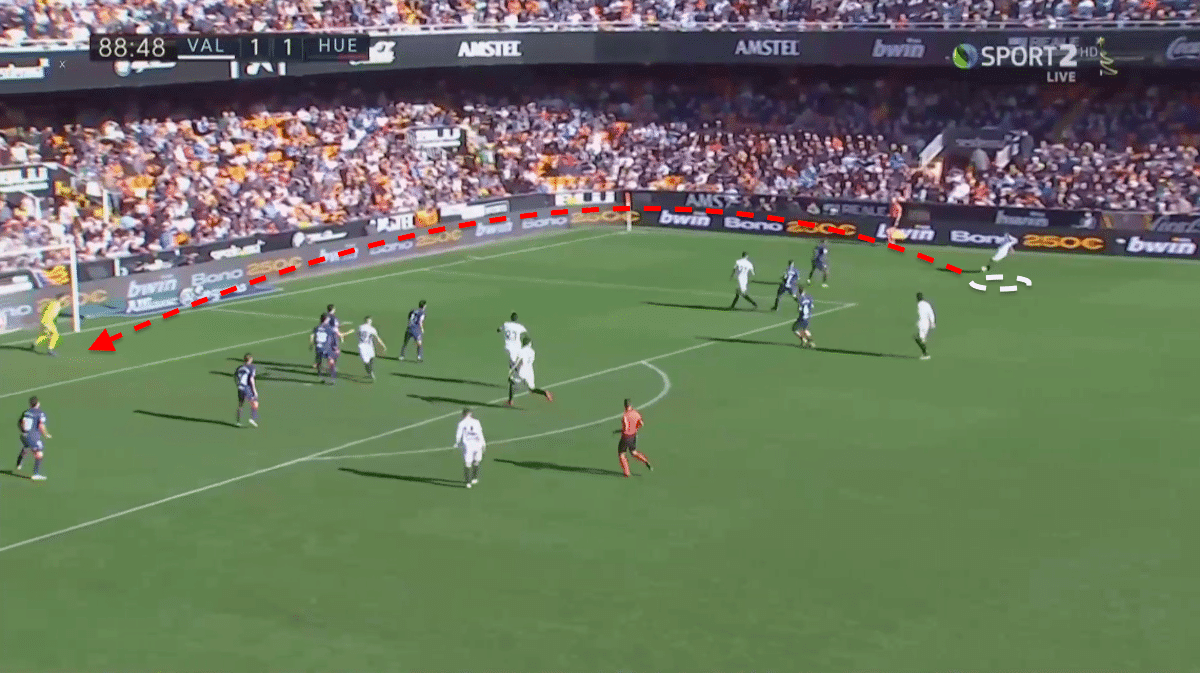 His cross finds Soler, who has broken from deep. Yet despite getting his foot to the ball, the midfielder is only able to direct his shot wide. 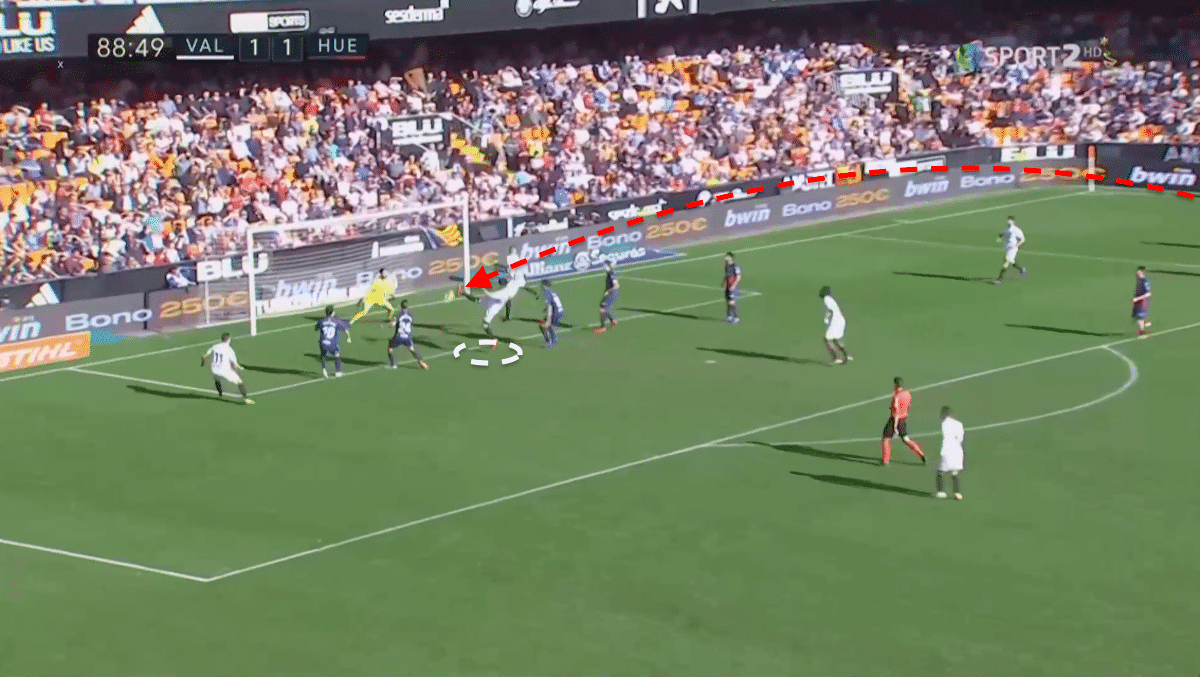 It is a big miss, although one that didn't end up costing Los Che as they clinched a late winner through Cristiano Piccini.

Of course, the above are just snapshots of Torres' potential. There is still much more to come given he has yet to score for the club and has provided just two assists in his 32 appearances, admittedly many of which have been short cameos from the substitutes' bench.