Crystal Palace have a big summer ahead. They might have, so far, managed to keep hold of Wilfried Zaha but a replacement for Christian Benteke is required in attack and it appears as though the Eagles will need to sign a right-back.

According to reports, Manchester United are in talks with Palace over a £42million deal to sign Aaron Wan-Bissaka. The England Under-21 international is top of Ole Gunnar Solskjær’s wishlist and the club, wanting to back their manager, are eager to bring him to Old Trafford.

It was initially believed Palace wanted closer to £60million for the 21-year-old but an initial fee of £42.5million is reportedly the figure both teams will agree upon.

It’ll be quite the payday for the Eagles but it leaves them with a monumental void to fill. Wan-Bissaka was a star performer last season and replacing him won’t be easy.

Weakening the defence is simply out of the question meaning Roy Hodgson and the recruitment team have to make sure the player identified ticks all of the boxes.

Any incoming full-back must be used to being busy. Wan-Bissaka averaged a high number of tackles and interceptions last term, highlighting the fact he was up against it in most matches.

Any potential replacement also needs to be able to carry the ball forward. More importantly, however, they’ll need to a clean player, one that doesn't mistime many tackles or gives away free-kicks in dangerous areas.

With this in mind, we’ve used the Football Whispers lab to unearth players who fit the bill.

The full-back's career would have come full circle if he ends up back at Selhurst Park.

The 28-year-old lost his place in the Liverpool side to Trent Alexander-Arnold and was loaned out to Bournemouth for the second half of the 2018/19 campaign after returning from injury.

He ended up making 14 appearances for the Cherries in the league but failed to cement a place in Eddie Howe's starting XI. However, in his limited minutes, he did manage to post some impressive averages.

He won 1.47 of the 2.53 tackles he attempted, made 1.25 interceptions and committed just 0.7 fouls. He is a reliable full-back and returning home could be the spark needed to get his career back on track.

With just a year remaining on his deal, he could be a potential bargain for Palace.

The French Under-21 international has only been with Eintracht Frankfurt since January after a €1million move from Monaco but he's already made quite the impression. 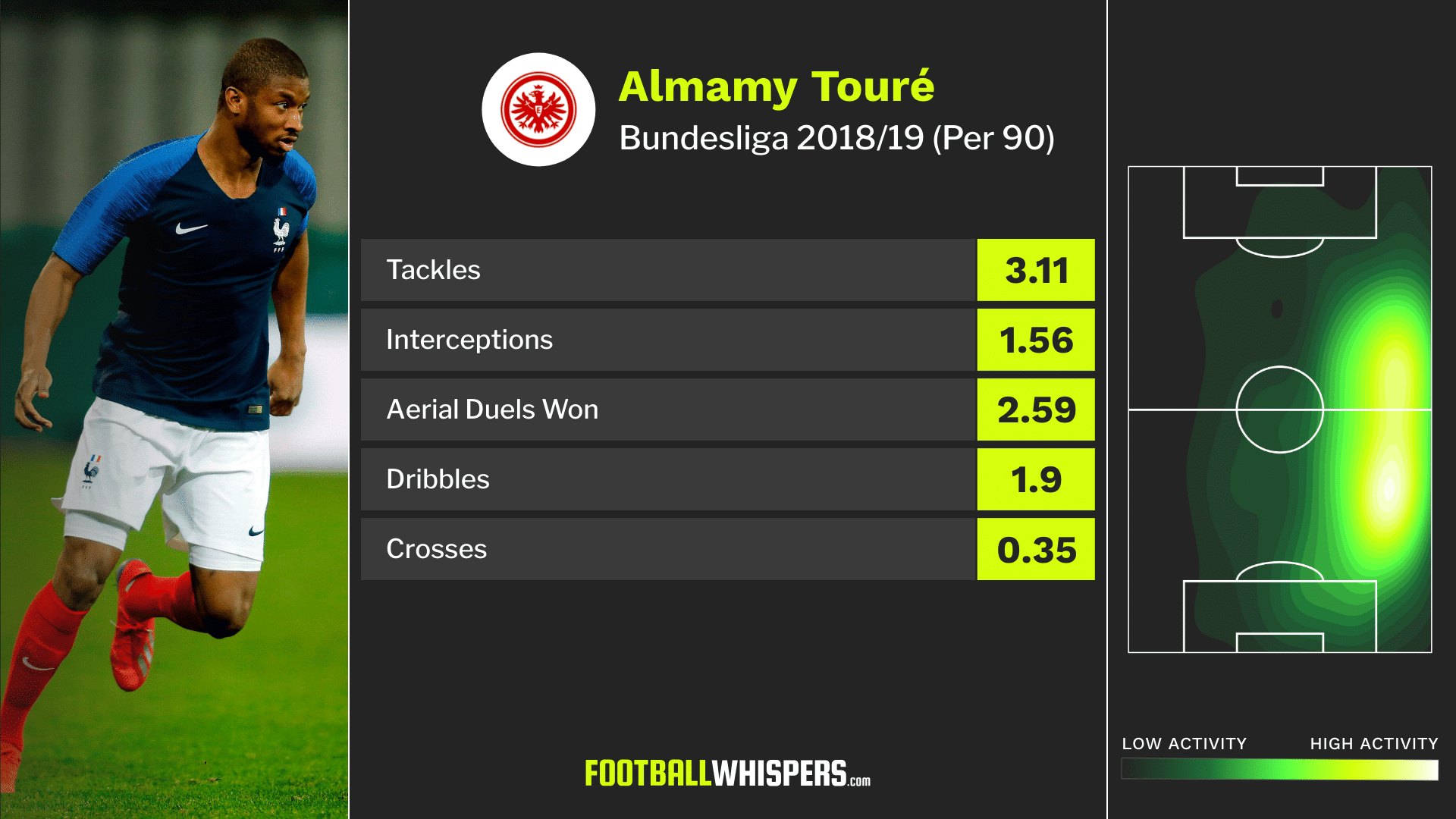 The 23-year-old does everything Wan-Bissaka does. He reads the game well, as evidenced by his 1.56 interceptions, he's used to being busy defensively, with his 3.11 tackles per 90 minutes, and he's progressive on the ball, averaging 1.9 dribbles.

He's also aerially dominant, winning 65 per cent of his duels. He's something of an all-rounder and there's still room for him to improve.

Frankfurt may be reluctant to let him leave but their business model is centred around buying cheap and selling high. If an offer pushing €20million was made it would be interesting to see whether or not the Bundesliga side would cash in on him already.

To replace Wan-Bissaka, Palace may have to dig deep into their pockets. Players of his quality aren't ten to the dozen. 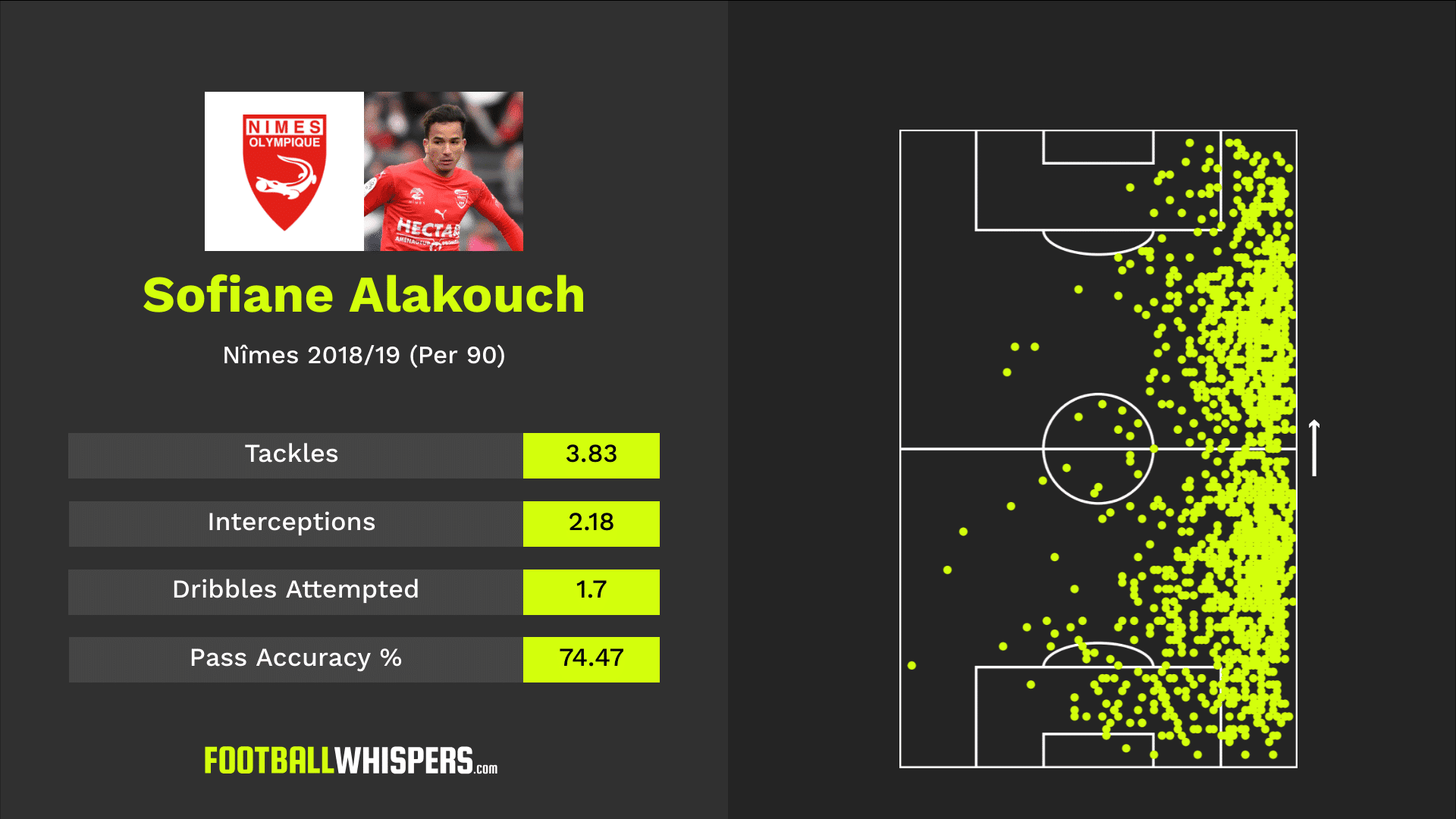 Another Ligue 1 starlet. Alakouch impressed for Nimes during the 2018/19 campaign as they finished a surprising ninth in the French top flight.

Not yet a household name, the 20-year-old has all of the traits required to be a solid, reliable full-back with the potential to turn that single France Under-21 cap into being a mainstay in the starting XI for the World Cup winners.

Alakouch ticks all of the boxes for Palace. He's used to being defensively busy, averaging 3.83 tackles per 90, he's making over two interceptions on a game by basis and attempting 1.7 dribbles.

His touch map shows he's comfortable in the attacking half, an undoubted asset, and he's not averse to drifting into central areas.

It may seem a gamble to sell one of the brightest talents Palace possess and replace him with a relative unknown, but stylistically the Nîmes youngster is perfect.

The Ligue 1 side could be convinced to sell him for around the €10million fee and in a few years time he could be worth triple that.