Watford were on a hiding to nothing against Tottenham Hotspur on Saturday – Spurs have won each of the last seven league meetings at White Hart Lane – but a 4-0 defeat to the Premier League title hopefuls should not cloud what has been a good fortnight for the Hornets.

It is testament to the increased level of optimism and expectation at Vicarage Road that Watford fans, enjoying successive seasons in the Premier League for the first time, had begun to turn against Walter Mazzarri prior to consecutive wins.

But back-to-back victories over West Bromwich Albion and Sunderland have changed everything in WD18 and suddenly Mazzarri – a former Internazionale and Napoli coach – is looking at a second season in the Vicarage Road hot-seat.

The Italian was hired in the summer when the popular Quique Sanchez Flores lost Gino Pozzo's faith. The Spaniard had done a good job, becoming the first manager since the legendary Graham Taylor to secure a second season in the top flight and taking the Hornets to the FA Cup semi-finals.

However, the former Real Madrid defender endured a nightmarish second half of the season, winning just three league fixtures. Pozzo was concerned about that slump, among other things, and removed a coach who had charmed the Premier League.

So what's been going wrong for Mazzarri and how did he turn it around? 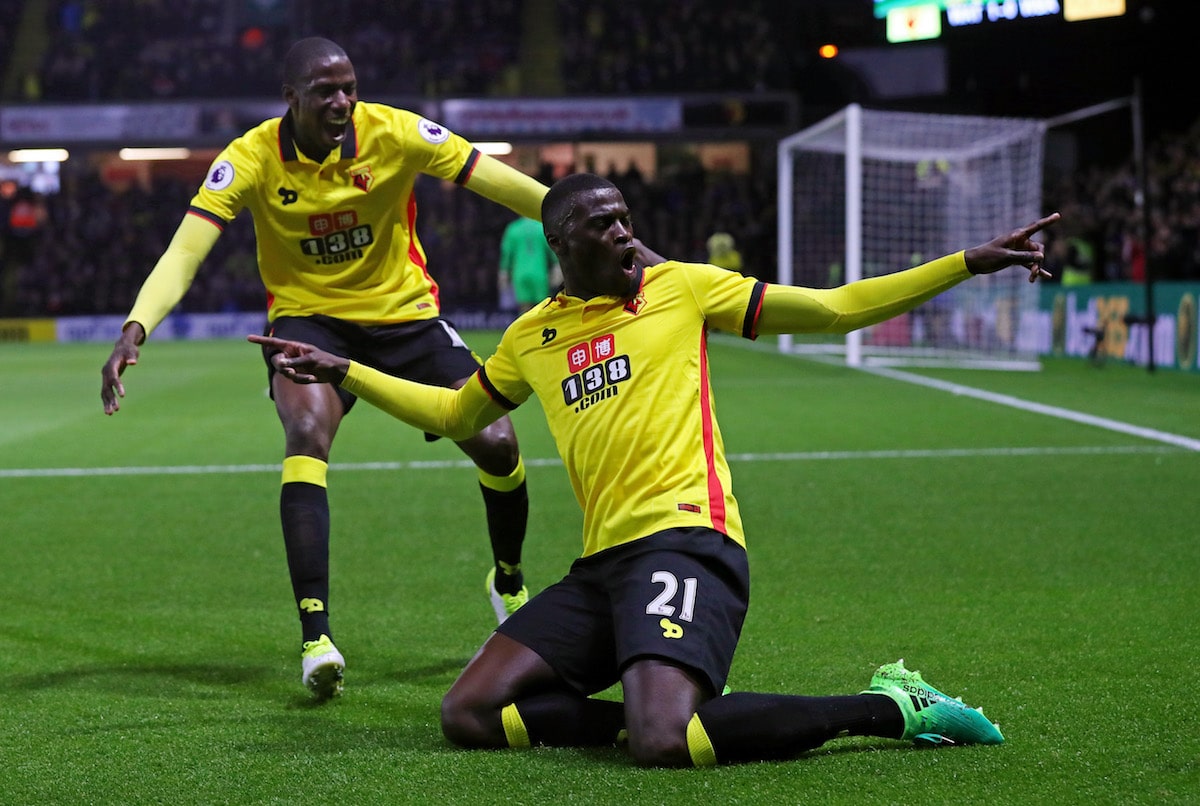 READ MORE: HOW DID THE HORNETS FARE IN DEFEAT SPURS?

Mazzarri was always up against it in the popularity stakes. Flores was waved off into the sunset on the final day of the 2015/16 campaign with a sense of disappointment. The Spaniard had taken his side to seventh with four consecutive wins in November and December 2015 before finishing 13th.

The football had not always been flowing and the Hornets were completely dependent on the goals of Troy Deeney and Odion Ighalo. But they had done something no other Watford team had managed in the Premier League era.

When the brooding Mazzarri arrived it was clear he was not going to be the same warm and cuddly head coach Flores had been. There were no declarations of his affection for the club or its fans. In fact, there wasn’t much at all. Despite moving to Manchester in order to learn English, Mazzarri was not prepared to share what he had learnt. All communication came through Player Liason Officer-cum-translator Lorenzo Libutti.

On the outside, at least, Mazzarri appeared cold and clinical. He was not the one-man PR machine Flores had been and a rapport with the club’s supporters was evidently not too high on his agenda. He was going to need performances and results. 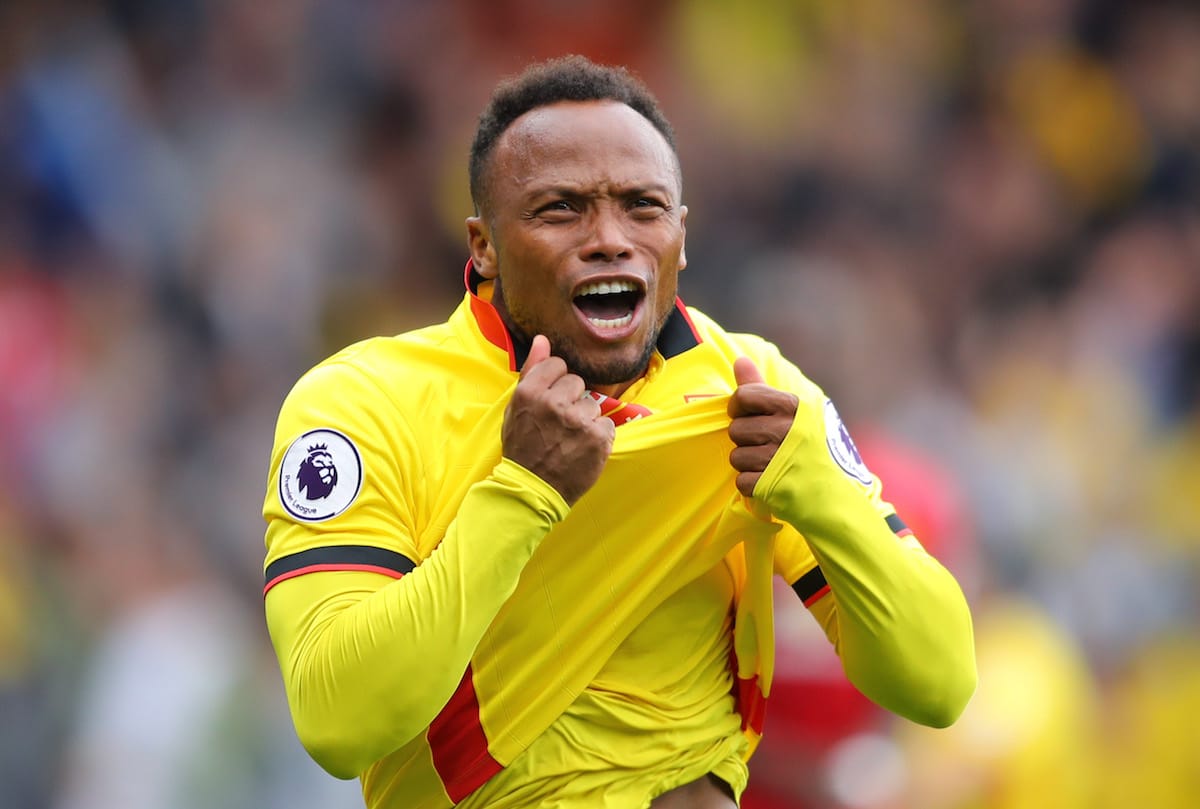 READ MORE: WHAT DID WE LEARN FROM WATFORD'S LOSS AT SPURS?

But Mazzarri got neither. A draw at Southampton on the opening day was creditable and served as evidence the Hornets would be OK this season. Defeats to Arsenal and Chelsea were as predictable as they were underwhelming before wins at West Ham United and over Manchester United at Vicarage Road got the season up and running.

That should have been the moment Mazzarri arrived; his masterplan apparent to all and any doubts blown away by a 3-1 victory over José Mourinho’s expensively-assembled side. But it was not. In fact, Watford picked up just four more wins from their next 17 Premier League fixtures.

Even with that dire run of form the Golden Boys only dropped to 14th place. But that was almost part of the problem. With 22 points – seven fewer than the season before – on the board the Hornets were almost certainly safe before the clocks had gone forward. There was nothing to get excited about and, even though a return to the Championship is not on the agenda, even the idea of flirting with relegation would lift the inertia.

There has been no clear style of play, nobody has really put their hand up for the Player of the Year award – to the point that Heurelho Gomes or Deeney will probably win on the basis of playing regularly and being popular – and the team and system have been far from settled.

In Mazzarri’s defence, there have been a lot of injuries this season. Ahead of Saturday’s game the Italian gave a lengthy update in his pre-match press conference with 13 players’ participation in doubt.

But even taking that into account, he has struggled to mould the side in his own image. Supporters recognise these things take time. Yet it is impossible to even get an idea of what that style might be.

However, that has changed in recent weeks and was particularly evident in the West Brom win. On average, the Hornets play 72 long balls per game – the sixth-most in the top flight. They also produce the fourth-fewest crosses with 18. The emphasis has been on getting the ball forward to Deeney and – before he was sold to China – Odion Ighalo as quickly as possible.

But Deeney is not particularly good in the air and has won just 41 per cent of his aerial duels despite being involved in the third-most per game (13.4) on average. In the graphic below he is compared to the three other Premier League players involved in the most aerial duels and he comes out worst for the percentage won. 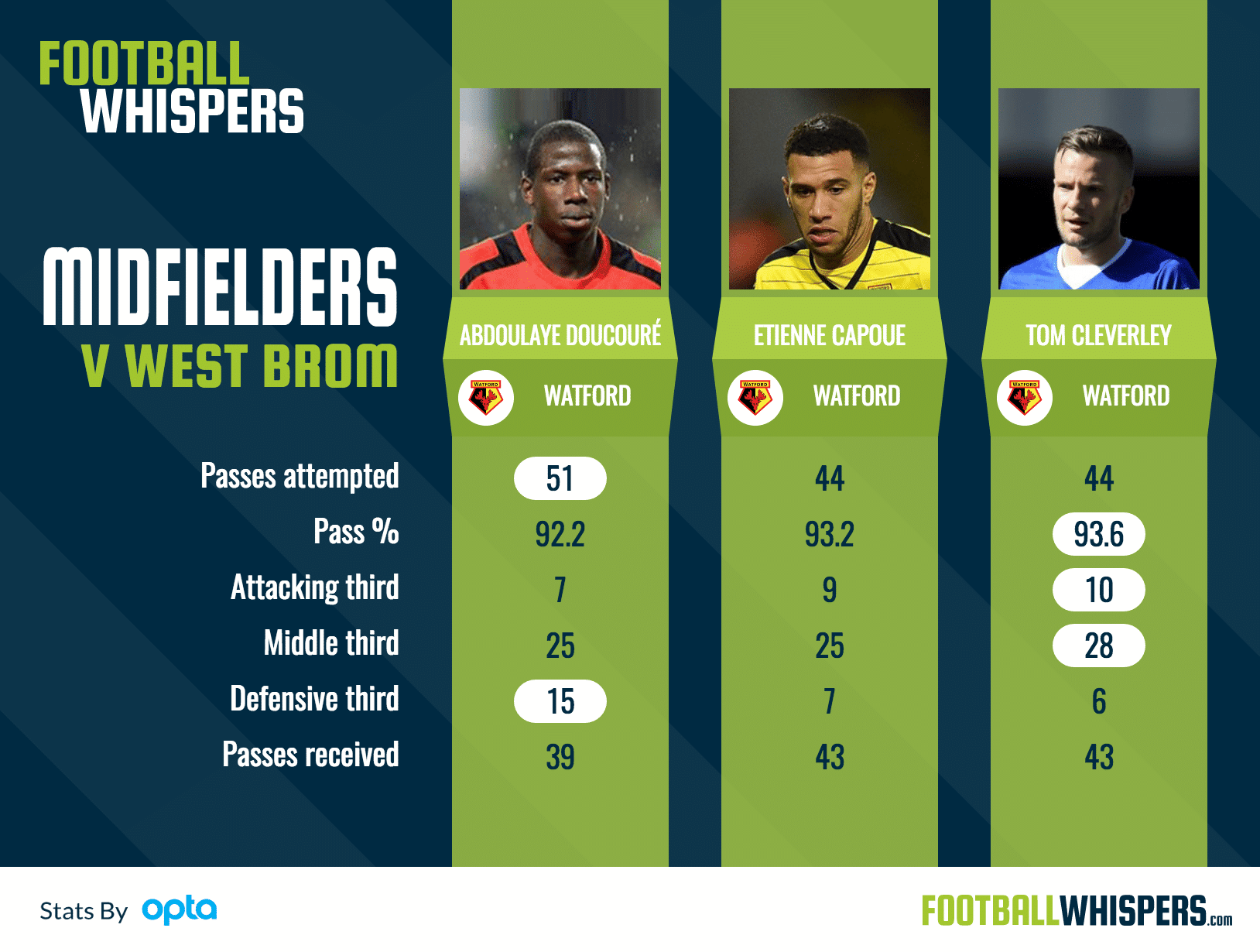 The plan has changed, however, and in the West Brom win it was quickly apparent that Mazzarri had changed the emphasis. Instead of hoiking the ball up to Deeney, it was on Abdoulaye Doucouré to pick the ball off the back four and play it short or get it out to wide men Nordin Amrabat and M’Baye Niang (shown below). 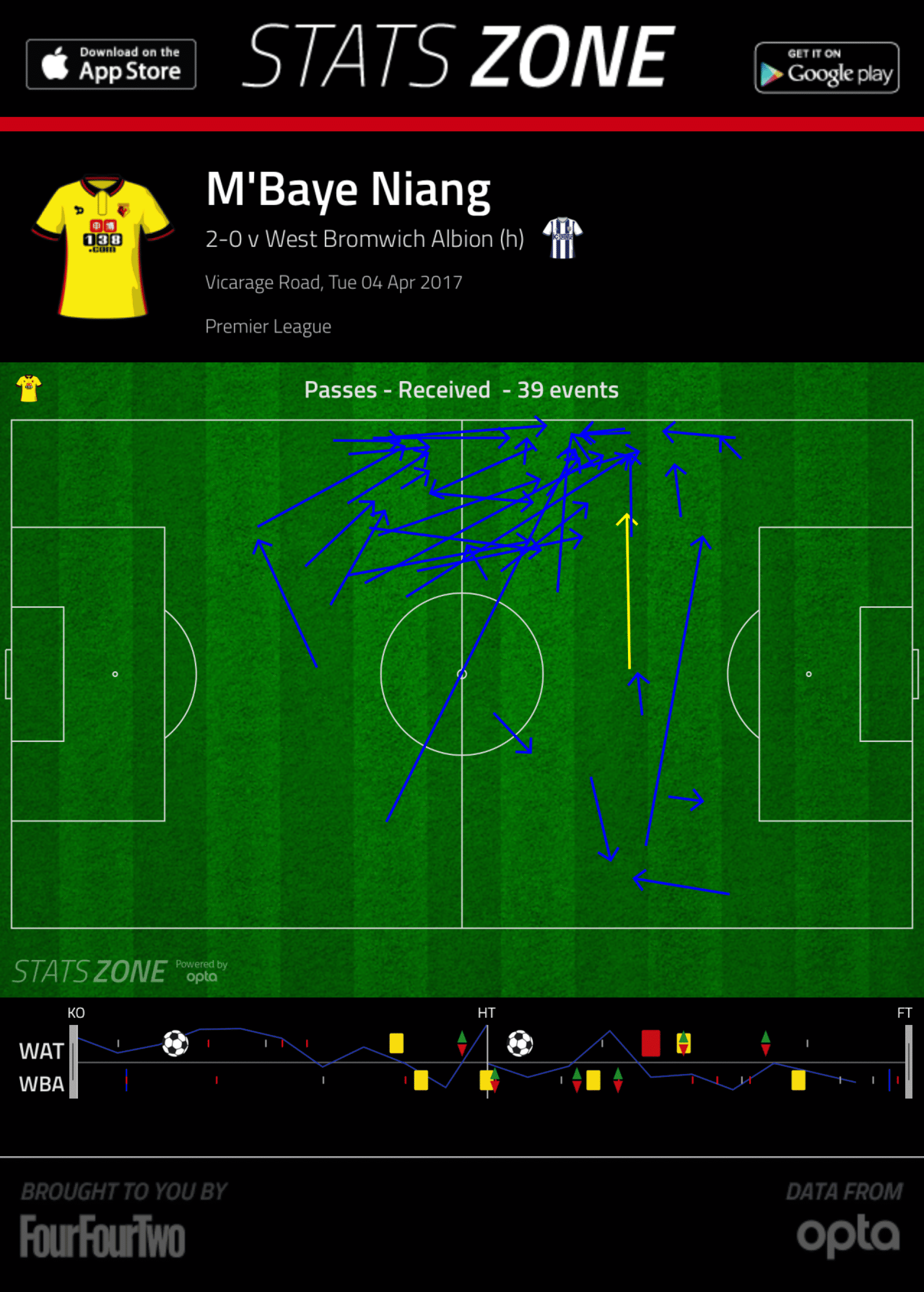 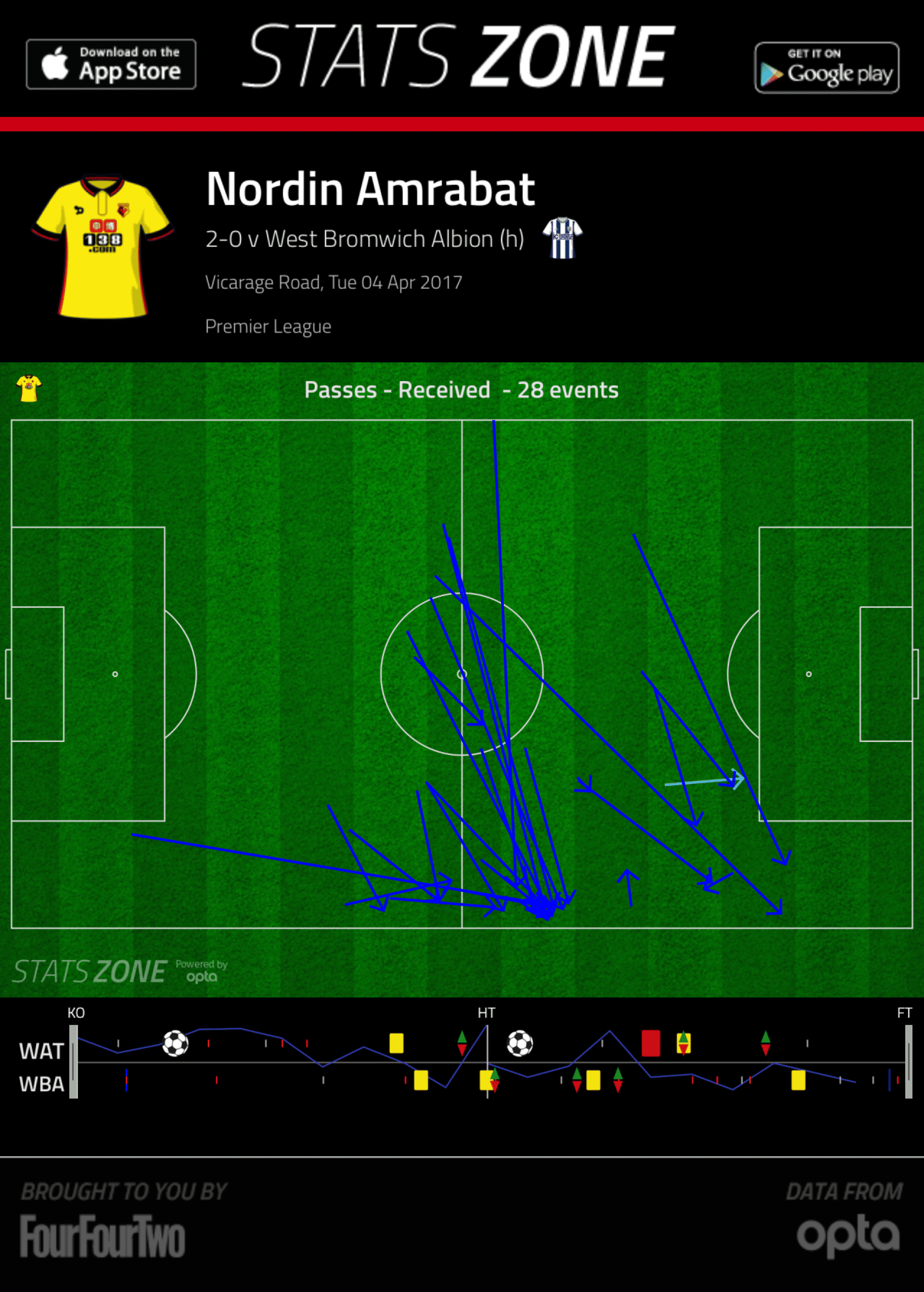 It worked too. Niang scored the opener after collecting Deeney's knockown, cutting in from the left and curling past Baggies keeper Foster into the far corner. Niang then bagged the assist for the second with a raking pass through the heart of the Albion defence for Deeney to smuggle the ball beyond Foster.

For his part, Doucouré won man of the match for the second game in succession. Quite the turnaround for a player Mazzarri was happy to offload in the summer transfer window. The Frenchman had only just arrived from Granada after spending the second half of last season parked on loan at Watford's sister club following a move from Rennes in January. 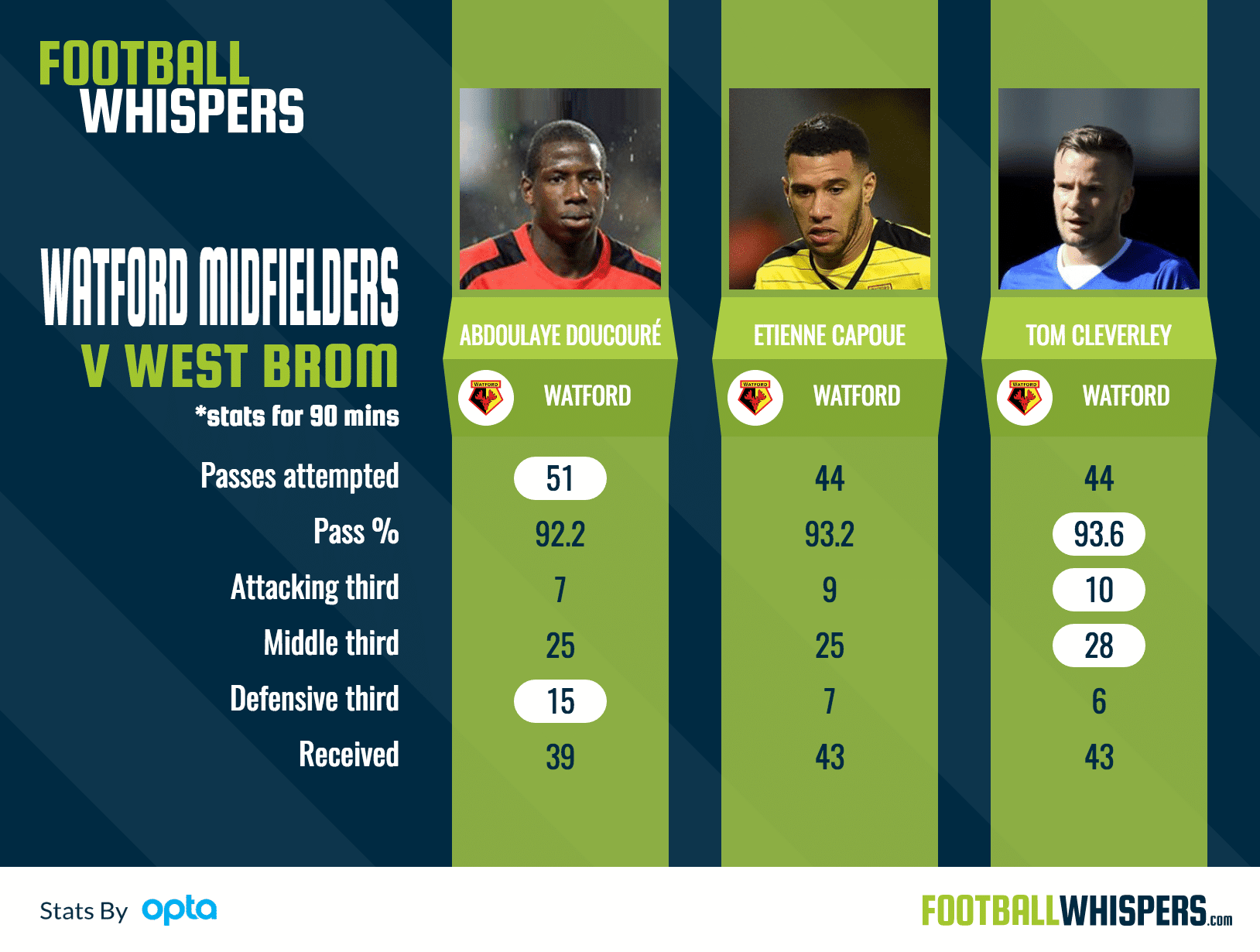 READ MORE: WHY TOM CLEVERLEY IS PERFECT FOR WATFORD ON AND OFF THE FIELD

In the graphic above you can see that Doucouré received fewer passes than Etienne Capoue and Tom Cleverley, the two central midfielders he played alongside, but he made more passes from the defensive third of the field than either player by some distance.

It has taken most of the season but Mazzarri looks to have a plan. If he can show in the seven remaining games that it is not a fluke, he could even record Watford's highest Premier League finish – currently 13th – and do something no head coach has done under the Pozzo's since Gianfranco Zola: earn a crack at a second season. It's all change at Vicarage Road. But not as you know it.