Ahead of the North London derby on Sunday, Theo Walcott was dropped from the Arsenal starting line-up as Arsène Wenger looked to continue the evolution of his new 3-4-3 formation.

Following the 1-0 win over Leicester City at the Emirates, it was easy to see why the English forward didn’t make the cut.

With just one shot, two successful dribbles and a failure to make a single key pass, it was a very disappointing night for the 28-year-old. Which is surprising, because with 10 league goals and two assists this is his most constructive season in terms of finding the net since 2013 (14).

Gonna get used to this 3-4-3 thing . Interesting to see Walcott finally getting his 1st start in this particular formation . #AFCvLCFC https://t.co/jlXGm4B5Qq

This should be the perfect formation for the former Southampton attacker. Originally an out and out winger, Walcott himself always hinted that he wanted a more central role and thought he’d be a great centre-forward.

Now, he gets to blend the best of both worlds and unlike when you play 4-3-3 or 4-2-3-1, he doesn’t have to contribute to the defensive side of the formation as the team is protected through the right wing-back and right centre-back.

Comparing them to Spurs, Walcott is not in the same mould as Christian Eriksen or Dele Alli, but it’s when you look at the league leaders, Chelsea, that you see where the Arsenal man fits in.

Both Pedro and Willian have enjoyed excellent seasons on the right of Antonio Conte’s 3-4-3 and Walcott has the tools to do a very similar job.

Walcott playing from the right

Earlier in the season, playing against his old club, Walcott showed his awareness of playing off the shoulder and knowing how to find space.

The attack started on the left, but the forward kept his position off the blind spot. 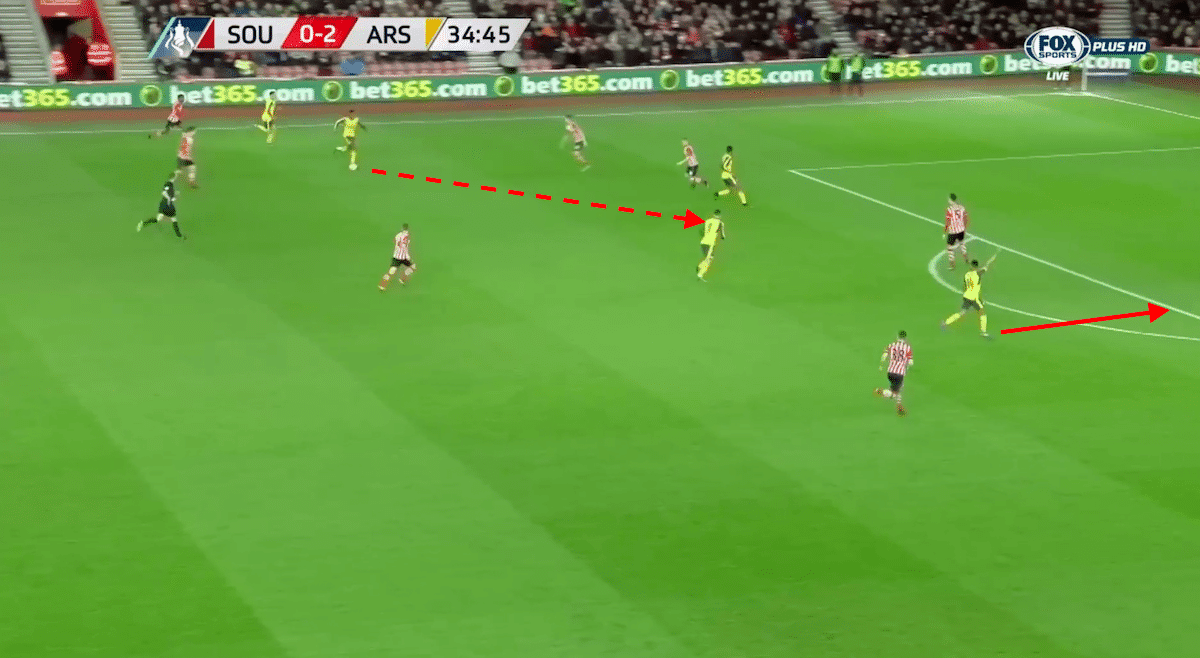 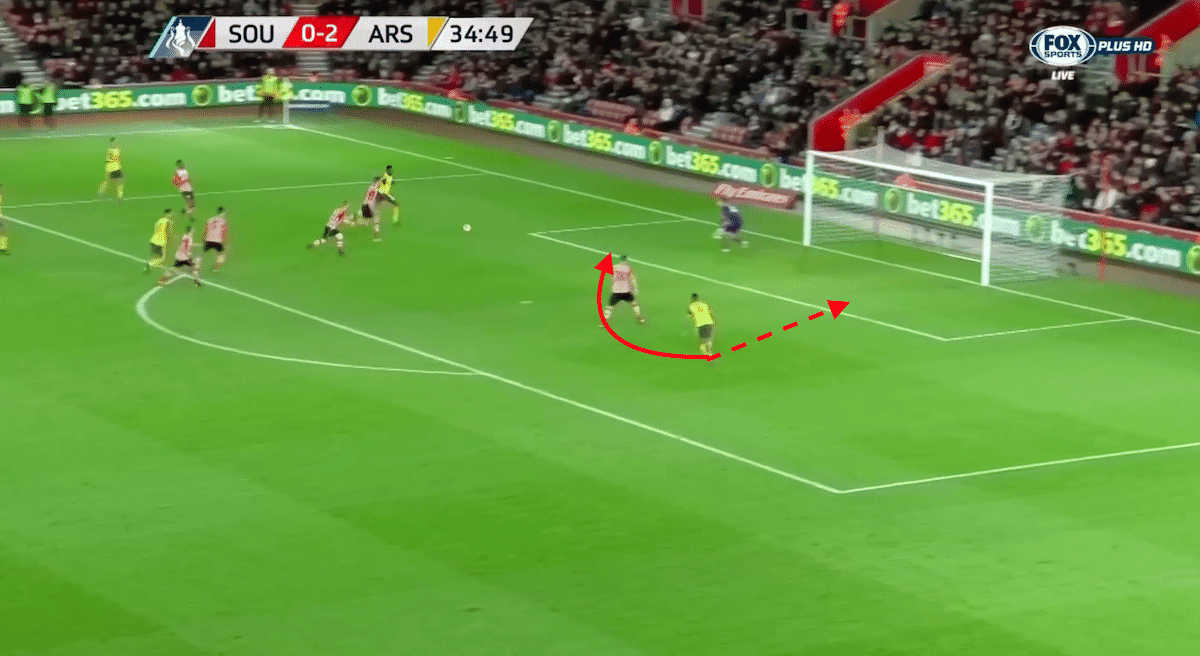 Most players would go for the far post, expecting the low cross, but Walcott uses his speed to go left, take his marker by surprise and get in front to add the scoring finish.

It was similar to the goal he recently scored against West Ham. Making the run from the inside right position, he has the freedom in that role to cut inside, take position on the penalty spot and with Arsenal’s opponents not entirely sure who is marking him, Walcott is unmarked to add the finish.

Both those goals are reminiscent to what Willian did for Chelsea against Everton mid-week. Starting way out on the wing, the Brazilian leaves himself open for the pass, but when it doesn’t come he makes the intelligent run. 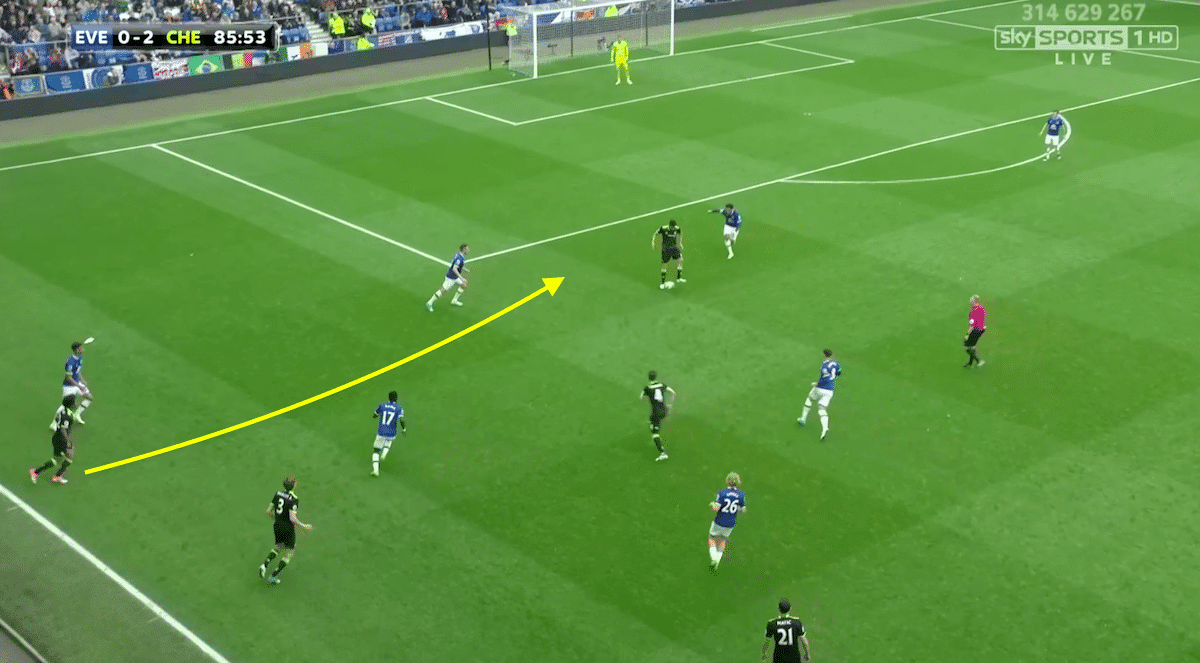 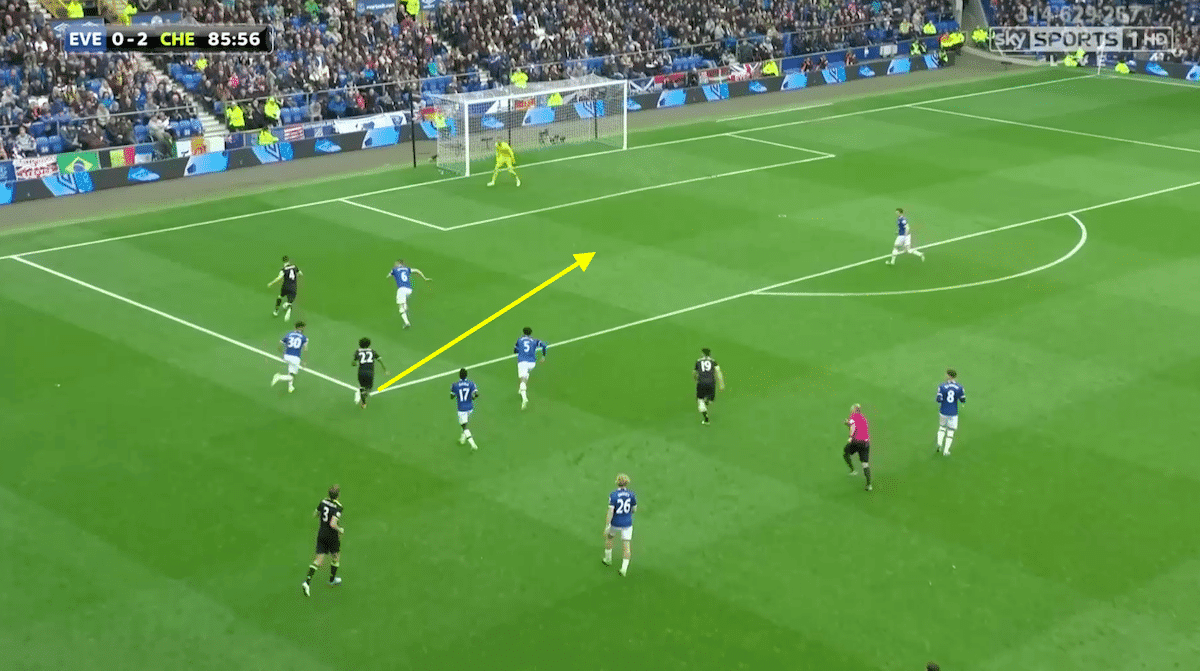 He’s already beaten Mason Holgate for pace, and with the other defenders attracted to the ball, Willian is able to run unchallenged and gets near the penalty spot to add the finish and put his team 3-0 up. 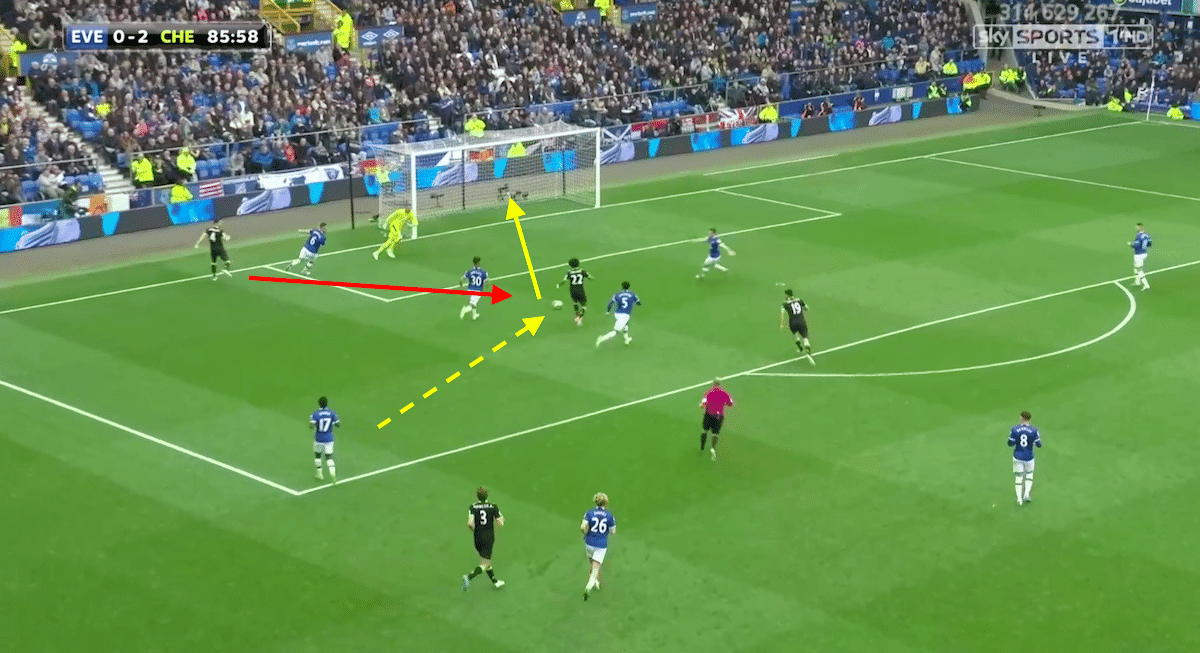 What Walcott Brings to the Attack 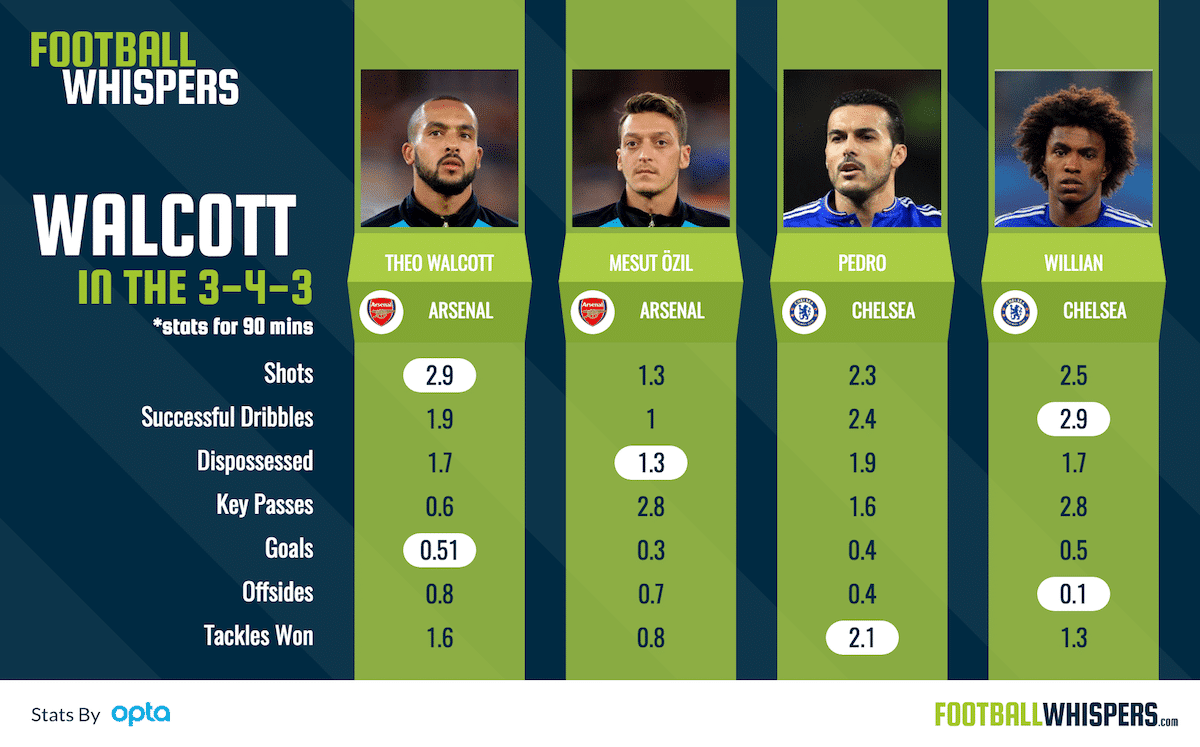 It’s far too edro and Willian possess, but he does have speed, a lot of speed and although he’s always been labelled as the opposite, he does know how to find space and use his intelligence.

Mesut Özil has been used on the right and he does have the technical ability to match the likes of Eriksen and the Chelsea duo, but he has failed to beat defenders off the dribble this season.

The German does make 2.8 key passes per 90 minutes, but without several options in the final third, that becomes a moot point.

Chelsea’s duo lead the way in terms of dribbles, but one area in which Walcott trumps them all is getting shots off and finding the back of the net.

More than just a creator for his team-mates, he can make his own opportunities, as he showed at the Emirates against Bayern Munich. 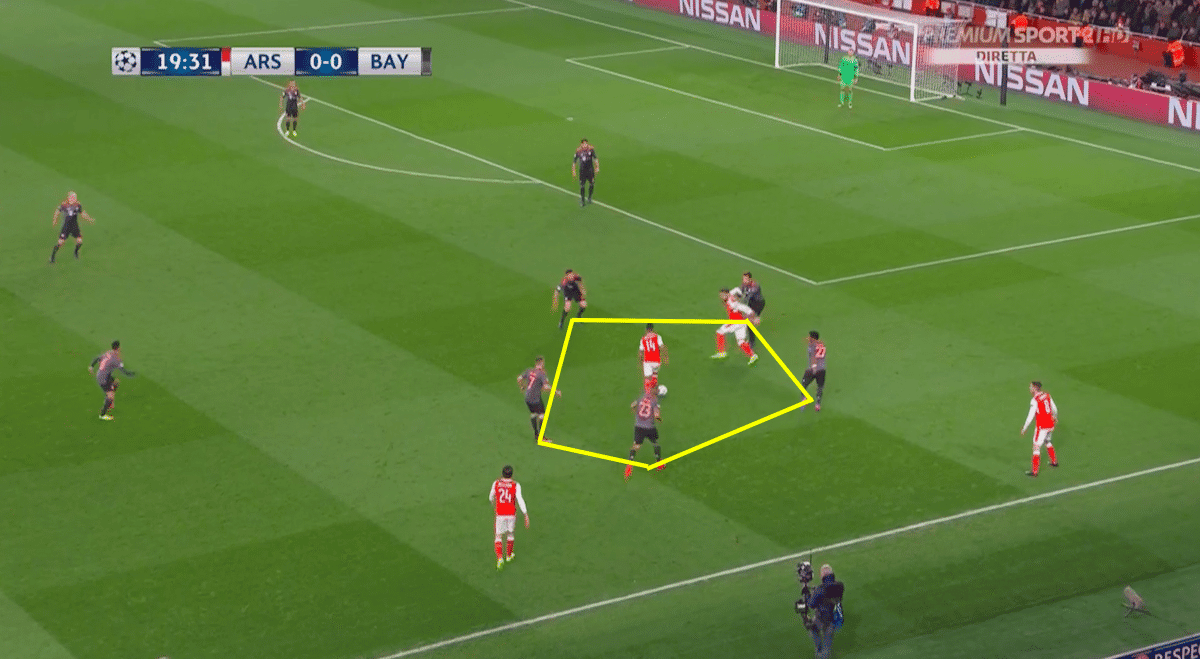 Surrounded by defenders, the forward uses the presence of Olivier Giroud is link up and bulldoze beyond the opposition. 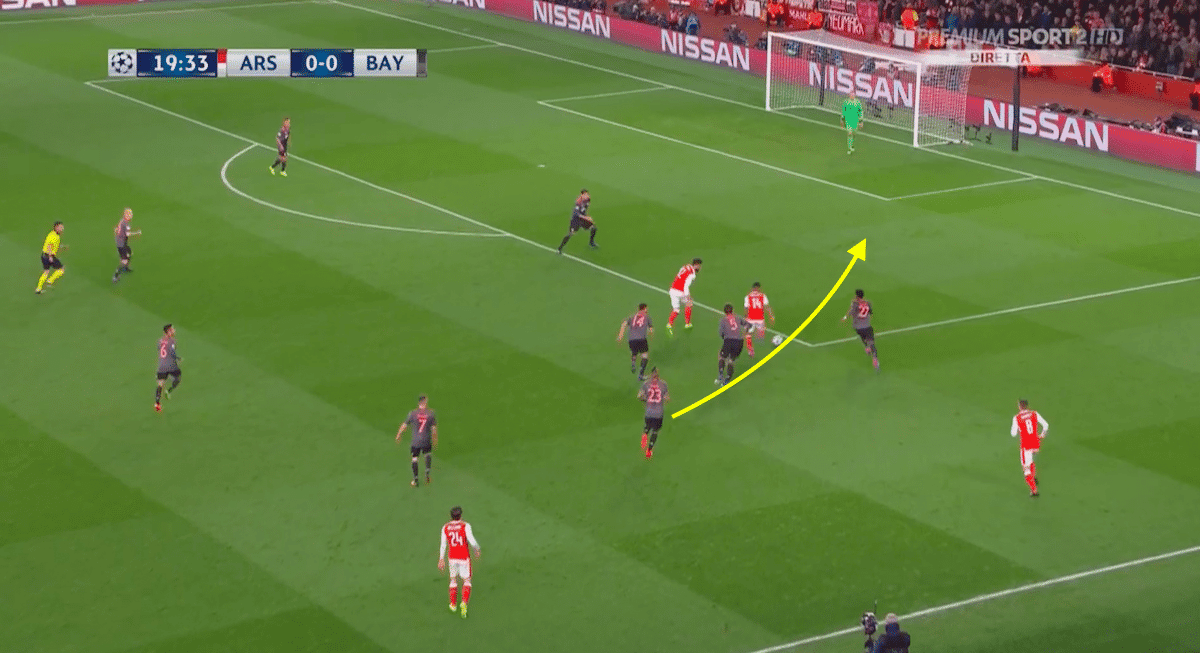 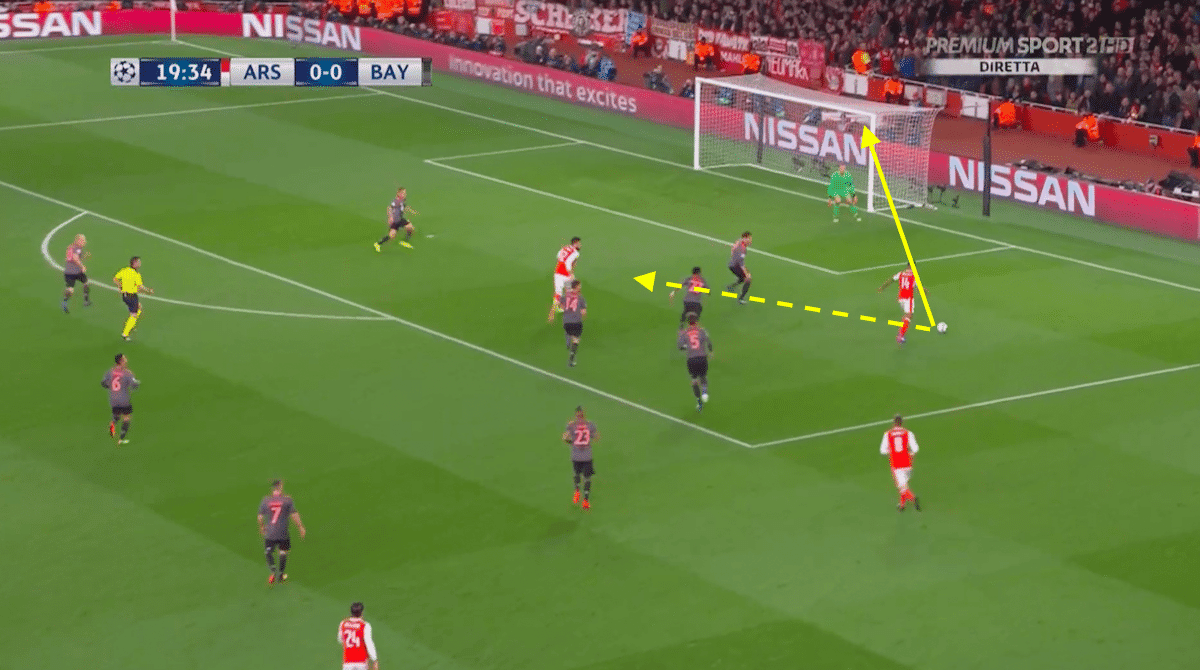 He uses his determination and speed to blast past the defence and then he does the one thing that he can do better than others in his position…finish.

Even Manuel Neuer was expecting the cut back to Giroud, but it’s a tough ball to find, so the 28-year-old smashed his shot into the near top corner.

Does Walcott have a future at Arsenal? 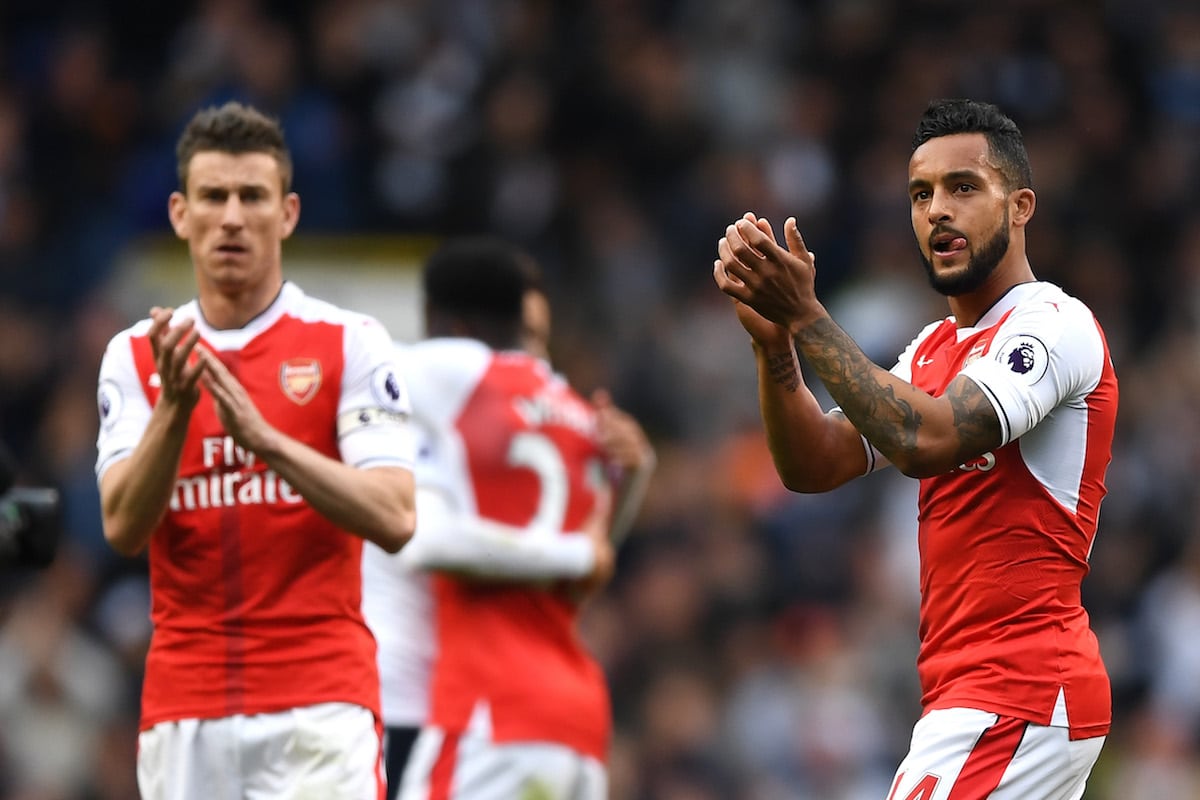 Contracted until 2019, it makes no sense to try and offload Walcott this summer. His skillset is ready and built for the 3-4-3 if you play him right.

Use him as an outlet in behind with his pace. Look to find him when he makes runs through the middle and protect him down that flank with numbers in defence.

Don’t believe everything you read, Walcott is perfect for the 3-4-3 and the formation is ideal for getting the best out the Arsenal forward.