This Albanian Cup final is the opportunity for one side to write history; who will grab the chance? Find out with our Vllaznia Shkoder vs Laci match preview with free tips, predictions and odds mentioned along the way.

Vllaznia Shkoder to win it in 90

We kick off our cup predictions by backing Vllaznia Shkoder to get the job done – and we think it will happen inside 90 minutes. They arrive in this match having won three of their last four matches including grabbing victory in each of their last two. Laci meanwhile arrive in this match off the back of two straight defeats. Combine that with the fact Laci have won just one of the last five head to head meetings and a Vllaznia Shkoder looks like the wise wager.

Our next wager for this game is that we will see at least three goals – or over 2.5 goals as the actual betting market defines. Each of Vllaznia Shkoder’s last four matches have gone north of 2.5 goals. The same is true of Laci with their last four games serving up a total of 18 goals. The head to head history doesn’t necessarily support over 2.5 with just one of the last four clashes going north of that mark; that game, however, saw eight goals!

It's just the small matter of who lifts the trophy!

Laci sit above Vllaznia Shkoder in the Albanian standings but Shkoder have a better head to head record. It makes this an intriguing game with the prize of a trophy at stake.

Vllaznia Shkoder might not have been winning every game but they’ve been a tough team to beat with just one defeat in their last 10 matches. On top of that, they have found a way to win games more recently and that will stand them in good stead here.

Laci have enjoyed a good season but recent results have gone against them; that might just see them feeling the pressure as this big game rolls around – especially as they don’t have the best record against Vllaznia Shkoder. Can they change all that here and land themselves a big, big win?

A quickfire FAQ on Vllaznia Shkoder vs Laci 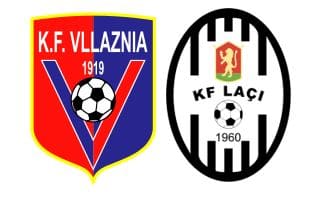