One of the more interesting matches of the upcoming La Liga round is the Villarreal vs Elche duel, so check our preview of the match if you want to know more about it.

Our favourite betting predictions for Villarreal vs Elche

If you are struggling to decide on the best bet for Villarreal vs Elche, check our top betting tips for this game right here:

Four of the last five h2h duels between Villarreal and Elche have ended in draws, including the two matches they played last season in La Liga. Villarreal also started the new season with four straight draws, while Elche drew in three of their first five games. Despite this, our prediction is for Villarreal to win this match – they are the better team of the two and they are playing at home. It's time for Villarreal to start winning games this season.

Three of the previous five matches played between Villarreal and Elche have gone under 2.5 total goals, so we would not be surprised if we see another low-scoring match when they meet in the next game. In addition to this, Villarreal only averaged 1.00 goals per game so far in the league and Elche is not much better with an average of 1.2 goals per game in La Liga this season.

Gerard Moreno to Score at Any Time

With 23 goals in 33 matches last season, Gerard Moreno established himself as one of the best strikers in La Liga. And while he is still waiting for his first goal in the new season, our prediction is for Moreno to score a goal against Elche. That being said, it's possible that Moreno will miss this game due to injury after he also missed the game against Mallorca over the weekend. If he does, Dia or Alcacer could be good choices to bet on to score.

The latest odds and stats for the Villarreal vs Elche

If you want to bet on the top La Liga odds, including the Villarreal vs Elche duel, check our selection of odds from the best UK betting sites:

Villarreal vs Elche preview: Can Villarreal finally win a game?

The current Europa League winners have started the new season in La Liga with four straight draws, which isn't the best start for them. In addition to this, the team drew against Atalanta in their first match in the new season of Champions League as well. So, the Villarreal is really in a dire need of a win against Elche. Luckily, Chukwueze is their only injured player at this time, which should make things easier.

It was a stressful season for Elche last year since they were just one spot above the relegation zone at the end, surviving merely by two points. In the meantime, Elche started the new season with a win, a three draws and a loss, which is a pretty good start for a team that was pinpointed as one of the main candidates for relegation this season. In addition to good form, Elche also has no injured or suspended players at the moment.

The usual questions for Villarreal vs Elche 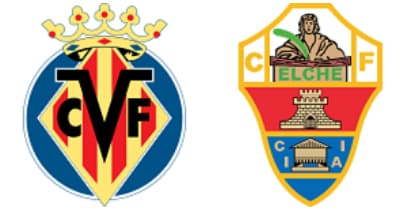