Villarreal to Win to Nil

First Half Result: Villarreal to Win

Villarreal and Almeria go head-to-head for three points at the Estadio de la Cerámica in La Liga on Sunday, October 23rd. Can Villarreal bounce back from defeat with a win against Almeria? Read our free predictions and find the latest odds for the fixture below in our detailed match preview.

Almeria have lost four away games on the spin ahead of their trip to play Villarreal on Sunday. Can the hosts get the job done against their struggling visitors? Read our top predictions for this weekend’s fixture below.

Villarreal to Win to Nil

Villarreal were humbled 3-0 at Barcelona in midweek, but back at the Estadio de la Cerámica against poor travellers Almeria, the Yellow Submarine will expect to find smoother waters. Almeria have lost each of their last four games on the road and they failed to register a goal in three of those defeats. Villarreal are generally a reliable outfit from a defensive standpoint and they should be able to dominate Sunday’s game. With Almeria’s poor away record considered, we recommend backing the hosts to win to nil this weekend.

Almeria have a soft underbelly when playing on the road and they have gone in behind at the break in each of their last three away assignments in La Liga. Their knack for falling behind early in games should inspire Villarreal to come out of the blocks quickly on Sunday as they chase a similar first-half outcome. The hosts have the class to put away a couple of early chances and bettors should consider taking advantage of the generous odds on Villarreal to be leading at the interval.

Top Betting Odds and Stats for Villarreal vs Almeria

View our rundown of the top stats for Sunday’s match below alongside a tool to help you choose the juiciest odds.

Read all of the latest injury updates and team news for Sunday’s La Liga contest between Villarreal and Almeria below.

French midfielder Francis Coquelin has a calf injury and won't be back in action until next month. Juan Foyth is a doubt at the back with a knee injury, while attacker Gerrard Moreno is touch and go with a hamstring worry. Villarreal were three goals down by half time at Barcelona in midweek.

Defenders Alex Centelles and Juanjo Nieto are both out for Almeria as are midfielders Carlos Rojas and Marko Milanovic. Almeria have won each of their last two home games, though their form on the road remains dismal and they will kick off Sunday's match as underdogs again. 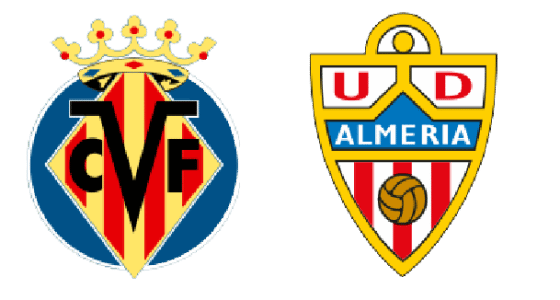 Villarreal will take on Almeria at the Estadio de la Cerámica on Sunday.

Villarreal beat Almeria a whopping 8-0 when the teams last met for a cup clash back in 2018.