Over 2.5 First Half Goals

Next round of DFB Pokal brings us a duel between a third-tier side Viktoria Koln and the perennial Bundesliga champions Bayern Munich. The game will be played on Wednesday, August 31st, so let's check it out in more detail.

If you need some help to find the right bet for Viktoria Koln vs Bayern Munich, check our free betting predictions for this duel:

Over 2.5 Total Goals in First Half

There is little doubt about which team will get to the next stage since Viktoria Koln is playing in third rank of German football. Basically, even the reserve team of Bayern Munich should have no issues in this game.

Obviously, the odds reflect this and betting on Bayern is not worth it. Instead, we suggest betting on goals. We expect a lot of goals in this game, so our prediction is to see at least three goals in the first half. After all, that already happened in three of the last five Bayern Munich games in all competitions.

Although we don't have any doubts that Bayern Munich will win this game and quite convincingly for that matter, we can still see both teams scoring here.

The game is long and we can see Bayern Munich dropping in focus enough to let one past them. After all, Viktoria Koln scored in five of six games they played in third league so far, so we wouldn't be that surprised if they manage to score one here.

If you are looking for the top Viktoria Koln vs Bayern Munich odds, check our selection of odds from the main betting sites in the UK:

The home team is obviously the outsider in this game, but let us check both teams in more detail before their meeting in German Cup:

The team from Koln had a sold start to the new season in third German league and they have three wins, one draw, and two losses in the first six matches. This is enough to put them in the eighth spot in the standings right now, which is a good start for a team that finished last season in the fifteenth place in the standings.

When it comes to team news, Andre Becker, Jeremias Lorch and Luca Marseiler are all expected to miss this game through injuries.

After winning the German Super Cup with a win over RB Leipzig, Bayern Munich started the new Bundesliga season furiously as well, with three wins in the first three rounds and a goal difference of +14. However, they slipped in the last round against Monchengladbach, who managed to hold them to a draw.

Meanwhile, Leon Goretzka and Eric Maxim Choupo-Moting are out with injuries at the moment, but we will likely see more changes in the team for this game as most of the first-team players will get some rest.

Q & A for Viktoria Koln vs Bayern Munich 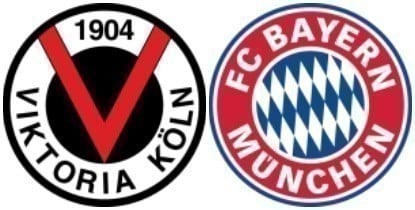